The beavers have won.

Conservation efforts to restore wetlands around Fanno Creek in Beaverton have been so successful that Oregon’s state animal is thriving. There are five beaver dams in the one-mile stretch of the Fanno Creek Trail between SW Hall and Scholls Ferry Road. That’s great news, except for the resulting floods that wreak havoc on the popular path that runs alongside them. For years people who rely on the Fanno Creek Trail have run into seasonal flooding in several sections of the path — including where it runs under Scholls Ferry Road. Mud and water make the path impassable and people are forced to go far out-of-direction or make a climb up to the street and cross seven lanes of traffic without help of a signal or crosswalk.

Now the City of Tigard is taking action. In the short-term they plan to re-route and raise sections of the path while they seek more community feedback about whether or not to build a new crossing treatment on Scholls Ferry Road.

“Some folks have told us they think it is neat to observe the beaver activity in the area, but we mostly heard that people are getting frustrated and concerned about how often the trail floods and can stay flooded over time,” the city says. 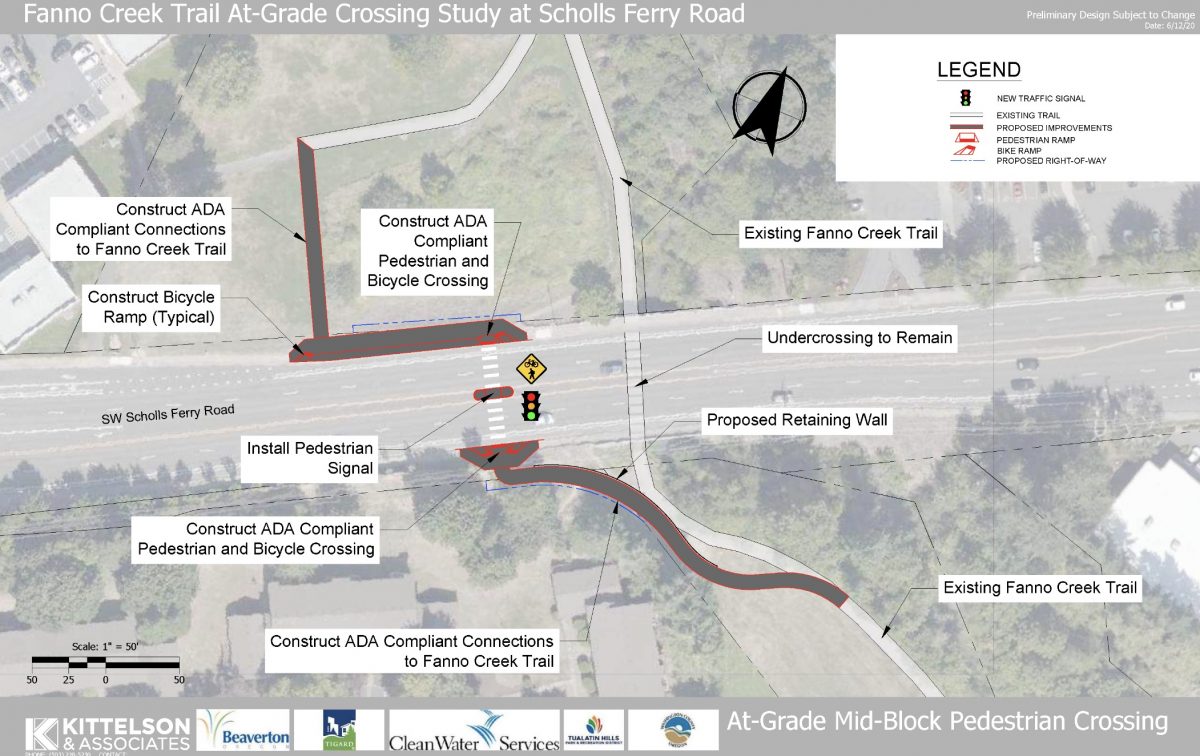 Next summer, crews will raise the undercrossing portion of the path by 10 inches. The work will lead to an overhead clearance of just 7-feet, far below standard guidelines, so chicanes will be installed to slow path users down. And this summer crews will build a new section of path just south of Scholls Ferry Road that’s roughly in line with where many people would walk and bike around regular flooding.

There’s currently an online open house that seeks feedback on next steps and the proposed at-grade crossing. Weigh in and learn more at City of Tigard’s website.

The restoration progress on the entire Tualatin river watershed from Hagg lake to the Willamette river by Clean Water Services and its partner city’s in Washington county has been world class. The return of the native Beaver population that once thrived in this area (how Beaverton got its name) is very encouraging, but it comes at a price to human built infrastructure. There will be places where trails, roads, parks and poorly placed homes will have to be reimagined if the creeks and riparian areas are to be returned to full health and function. Much accommodation will have to be made by our built world, but this is work we should do with a smile as it is as important as choices we make in transportation and energy in creating a sustainable world.

Raise the level 10 inches? WTF? I’ve been in that water when it was almost up to my crotch while riding though that. Give it up… Move the trail so it rises to street level, and put in a traffic signal that we can activate when we want to cross.

That’s the plan. Read the story. Raising it is only a short-term measure until they find the funding.

How about a new bridge on Scholls that is a lot higher than the current one?

Damn beavers, c’mon it was right there.

I like the looks of this project and hope the signalized crossing is built. I do wish that they’d make the signal a HAWK beacon instead of a standard signal though…from my personal experience they seem to have higher compliance rates.

I’d be fine with having the signal only active when the underpass below is flooded. I assume there’s a way that they could automate this, and I would imagine it could make the surrounding communities more receptive to the project.

I remember how much fun my son had riding through the water under Scholls Ferry when he was 7. He is now 35.
The park has always flooded, that is its function. Parks and paths can share space with floods, but beavers are not into multi-use. They like to cut and flood. It is all fun and games until they cut down your favorite tree and flood your neighborhood. The next few years will be interesting as they extend their water features.

Is there a reason they just don’t put in a beaver drain? They allow the beavers to be beavers, keep the water at a set level and aren’t terribly expensive. See: https://files.dnr.state.mn.us/assistance/backyard/privatelandhabitat/clemson_beaver_pond_leveler.pdf

Would it be able to take all of the water that goes through Fanno at that bridge?

Depends on what you mean by “take all of the water”. The idea is have an outflow roughly equal to normal outflow. In a river setting there would be bounce as the water comes from the streams and some rising as the river surges. But sized properly, they reduce the flooding in the short-term and quickly get the river back to normal long-term.

love the beavs, but now they’re damming traffic on scholls ferry as well

That is because Washington County has added more and more car lanes on Scholls Ferry Road and because TriMet has not added more buses in the suburbs that were built over twenty-five years ago. Not one bus goes to the Progress Ridge shopping center.

TriMet’s complete incompetence, especially anywhere on the westside, is shocking. My new residence (Salt Lake City) has significantly better transit service than Portland, as does every other major city I’ve spent time in. Incredible how far TriMet has fallen.

Transit service on the east side in Portland is pretty good. SW is very hard to serve, primarily due to the development patterns, but also topography and commuting patterns.

Let’s look at Salt Lake City. I picked a random suburban area and got Google directions to downtown. From the Willow Hills neighborhood, it looks like it would take you 1:40 to get downtown, compared with 24 minutes to drive 17 miles.

A similar distance from downtown Portland would be the area around Tualatin HS. 1 hour walk + bus to get downtown, or a 30min for a 16mi drive.

I’m sure if you are close to light rail, Salt Lake City is great. Their sprawl is much worse than Portland, which is probably why Portland is #25 on this list, and Salt Lake City doesn’t even show up:
https://en.wikipedia.org/wiki/List_of_U.S._cities_with_high_transit_ridership

Reply to  Chris I

Yes, the sprawl is definitely an argument, and in the southern SLC metro that’s basically all suburban sprawl it’s not as good. But my experience actually living in both cities is that it’s significantly easier to get around SLC proper than Portland proper, and also easier to get to the nearer suburbs.

I frankly don’t care about light rail; I’d rather focus on bus service since it’s so much more flexible and can serve a vastly larger population than light rail ever can. And SLC has a very large number of express buses, commuter routes, and the like compared to Portland, and it’s very easy to get from one side of the city to the other by multiple different bus routes.

They are finally working on it.

I’ll believe it when I see it actually happen

The beavers have hardly won; the engineers have won! A few beavers in exchange for basically a continuation of the status quo is a win for engineers not beavers!

Y’know what we need to defeat the beavers? … Ducks! Go Ducks!

To Hell with the Nutria!!!

My question is: Did the dam beavers apply for planning permission to build their dams? Did they complete an environmental impact statement? Hold community outreach meetings? These dam beavers are running roughshod over our bureaucratic processes.

The All Powerful Beaver Lobby strikes again! When will the children and seniors be safe?

K'Tesh
Reply to  Matthew in PDX

I’m sure they’re just minding their own dam business.