$5.9 million lawsuit says City of Portland is negligent for allowing parking at intersections 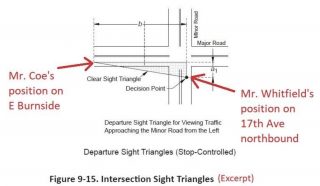 According to the lawsuit, “Eric Whitfield, who was driving northbound on SE 17th Avenue, stopped at the stop sign, and attempted to turn left (westbound) onto Burnside. People had parked vehicles along the curb as the City’s signage invited them to do, blocking Mr. Coe and Mr. Whitfield’s view of each other.”

“Mr. Coe’s death in the resulting collision,” the suit declares, “could have been prevented if the City complied with the law.”

Kocher is suing the City of Portland and Whitfield on behalf of Coe’s estate.

Kocher’s name might ring a bell as he’s well-known in local advocacy circles. Last year he won a $145,000 settlement in a case against the City of Portland in a case where a man riding a bicycle was hit and injured by a TriMet bus operator. Last month Kocher published an article on BikePortland where he urged readers to request lower speed limits on neighborhood streets.

With his lawsuit on behalf of Elijah Coe, Kocher will test the city’s justifications for not implementing one of their own policies.

Please support BikePortland with a monthly subscription or one-time financial contribution.
Conditions on SE Ankeny are more dangerous because people are allowed to park all the way up to the corner. (Photos © J. Maus/BikePortland) 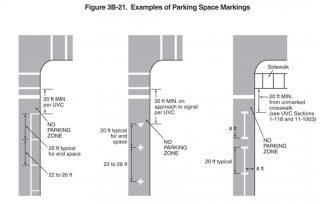 Known as “daylighting” of intersections, Oregon law (ORS 811.550) states that parking is not allowed within 20-feet of crosswalks at an intersection. Portland City Code (16.20.130) also specifies a 50-foot parking buffer at intersections and a prohibition of vehicles over six feet high. Armed with those laws, activists have for years begged PBOT to enforce them. The issue is especially important for vulnerable road users like those in wheelchairs, on foot and on bikes, because they can be very hard to see by cross-traffic when tucked behind parked cars.

The problem is especially acute on streets like Southeast Ankeny which have a high volume of bicycle traffic and are filled with drivers and their parked vehicles. In April 2018 we reported on a bicycle rider who was hit by a car driver and many of your comments mentioned the problem of reduced visibility at intersections.

In the past, the City of Portland Bureau of Transportation has said another state law (ORS 810.610) gives it the right to deviate from the 20-foot requirement and establish their own local regulations. In an email to Portland resident concerned about this issue in February 2018, then PBOT Director Leah Treat wrote, “Parking Enforcement officers use their discretion when enforcing these rules.” Treat also said the agency relies on citizen complaints to enforce specific locations. 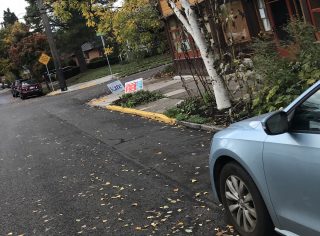 This intersection on SE Clinton was daylighted after someone filed a complaint to PBOT.
(Photo © J. Maus/BikePortland)

In September 2018, PBOT unveiled their new “vision clearance at intersections” policy. To improve safety, PBOT updated their design guidelines to include a 20-foot minimum setback to on-street parking at certain intersections. But those guidelines would apply only to “pedestrian priority streets” and would only be triggered on new capital projects. And of course there are thousands of intersections that need this treatment right away.

Kocher thinks road users shouldn’t have to wait. In a Willamette Week article on the topic last year Kocher called PBOT’s complaint-driven system a “feeble half-measure” (especially in light of an adopted commitment to Vision Zero).

And in the complaint he filed with the court yesterday, Kocher wrote, “The City’s failure to provide adequate sight distance at intersections endangers people regardless of what mode of transportation they are using… The City’s practices described herein violate PBOT’s enabling statutes under which PBOT has a duty to make travel on its streets “reasonably safe to the general public”… This duty is fundamental to PBOT’s role as a transportation agency and
is not subject to any excuse, justification, or loophole.”

“The City’s ongoing failure to provide parking setbacks (or reduce speeds, or both), achieve adequate sight distances and visibility at intersections throughout Portland,” he continues, “creates an ongoing and substantial risk of harm to people who use Portland’s city streets daily.”

In addition to the $5.9 million, Kocher wants a court order that would force the City of Portland to implement parking setbacks citywide.

(Disclaimer: Forum Law Group is a financial supporter of BikePortland.)