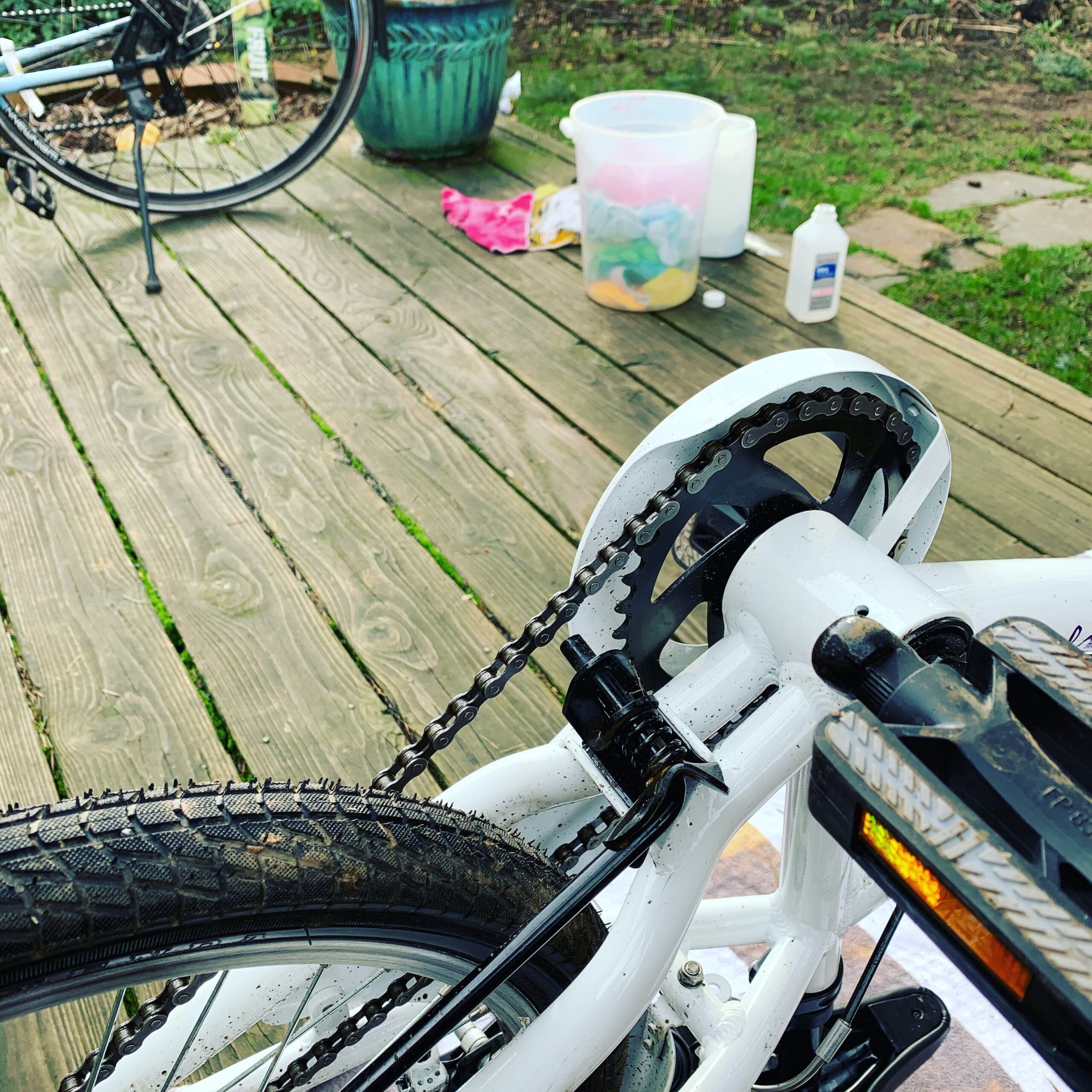 Bike sales are through the roof — in Portland and across the country. Isn’t that great? Only downside is basic bikes can be hard to come by. And then there’s the need for repairs and maintenance.

An old mom-group friend posted this photo of the bike wall in an Evansville, Indiana Target. That’s pretty amazing. There was recently even a BikePortland Forums post asking about where to buy right now. I also just started following Portland Bicycle Emporium on Instagram. The owner of that shop is pulling 12-plus hour days and can’t keep low-priced, starter bikes in stock (his posts crack me up, so worth a follow).

It’s sort of weird but I’m suddenly a veteran now in comparison to all the new cyclists. JK. I still have no idea what I’m doing, so I’m going to ask you: 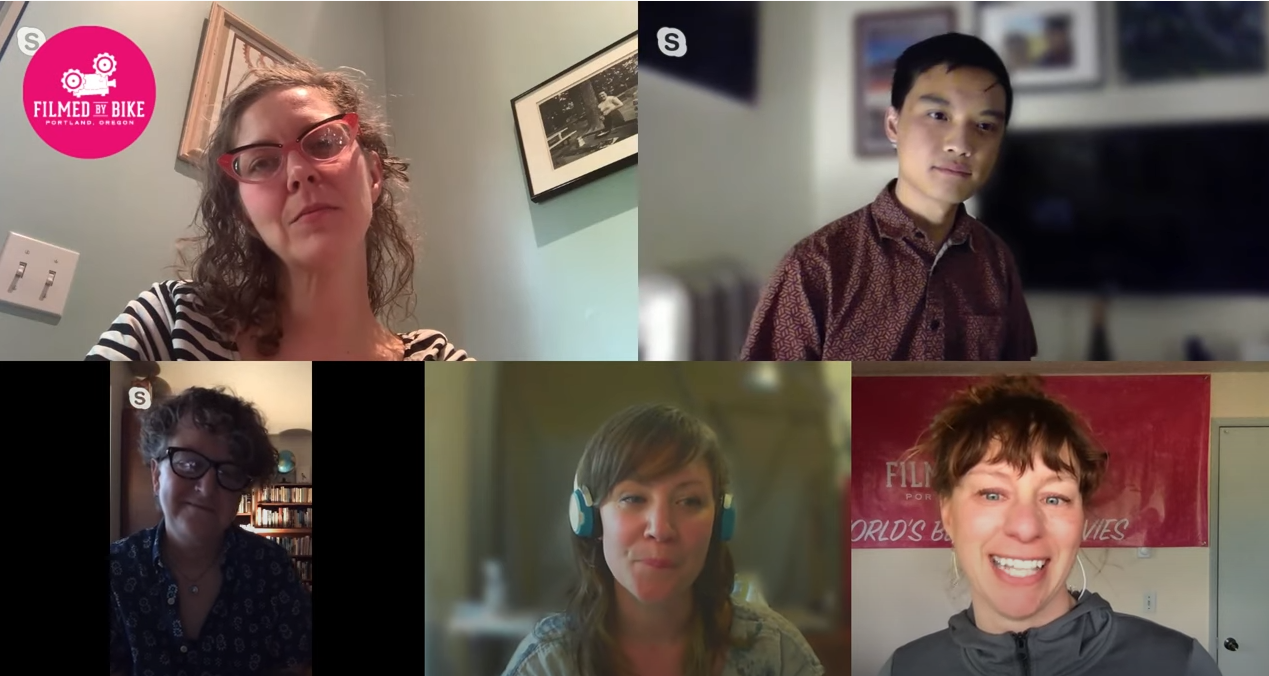 I’m pretty good at being reclusive and introverted, but even I’m starting to feel the strain of quarantine.

I was truly looking forward to all the local bike rides for spring and summer to get to know all of you IRL (in real life), and for getting my kids a bit more into biking. You know, plant those life-long cycling seeds. I’m hoping today we can each share a bit of what we’re doing to help both new people like me find “virtual” social biking options and help each other stay connected. 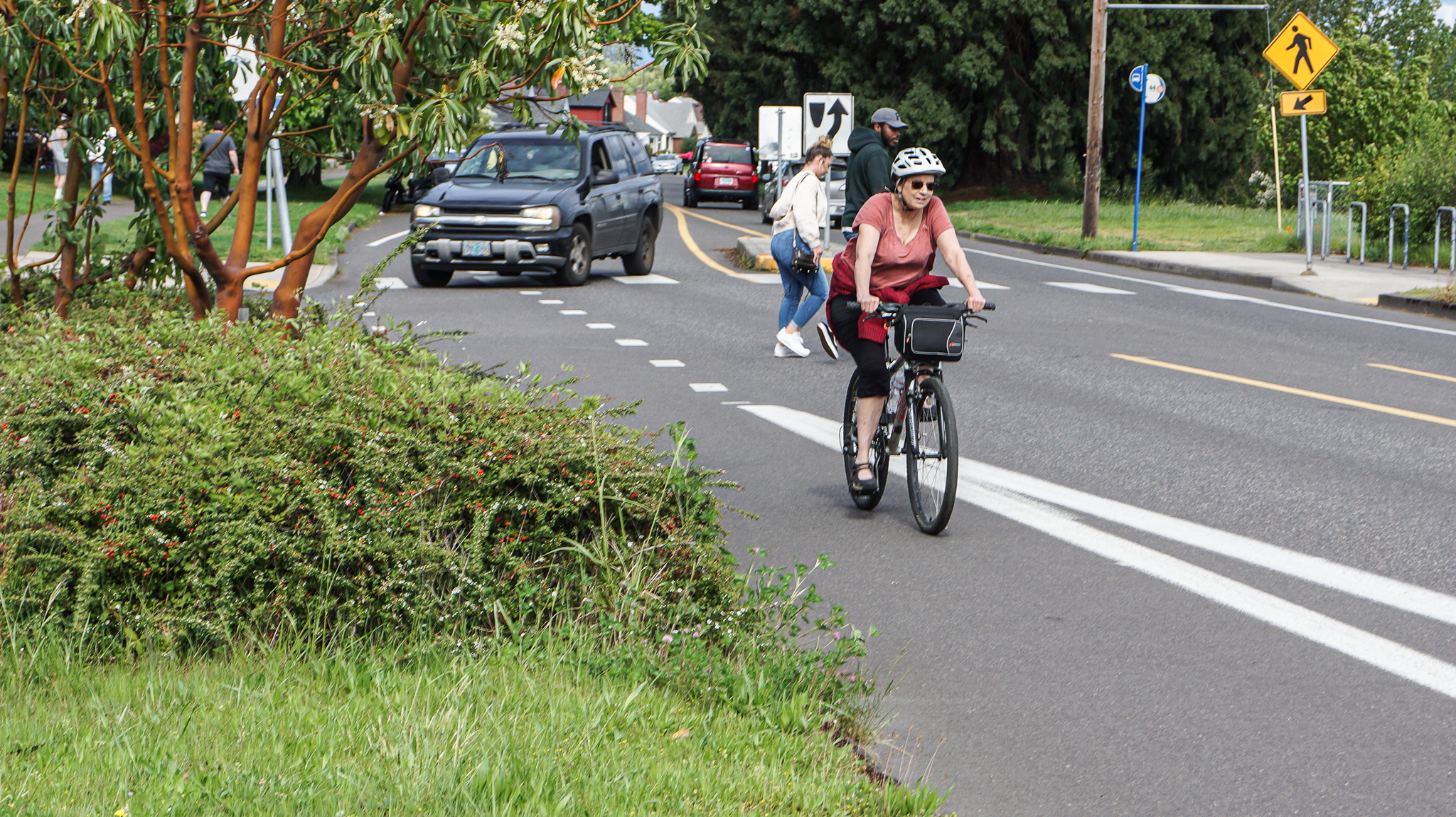 The insurance post regarding cars, uninsured motorists, and cyclists was fine and all, but what about a kayak? Yes. A kayak.

The husbeast hits the loop around Smith & Bybee Lakes on weekends. He’s pulling even longer days now that we’re all in an economic slide, trying to keep his team employed. So he heads out on long rides on the weekends. He gets back, and tells me, “There’s this asshole talking on his phone while carrying a kayak to the parking lot, trips on the curb, lands in the bike lane, and two cyclists crash into him.” 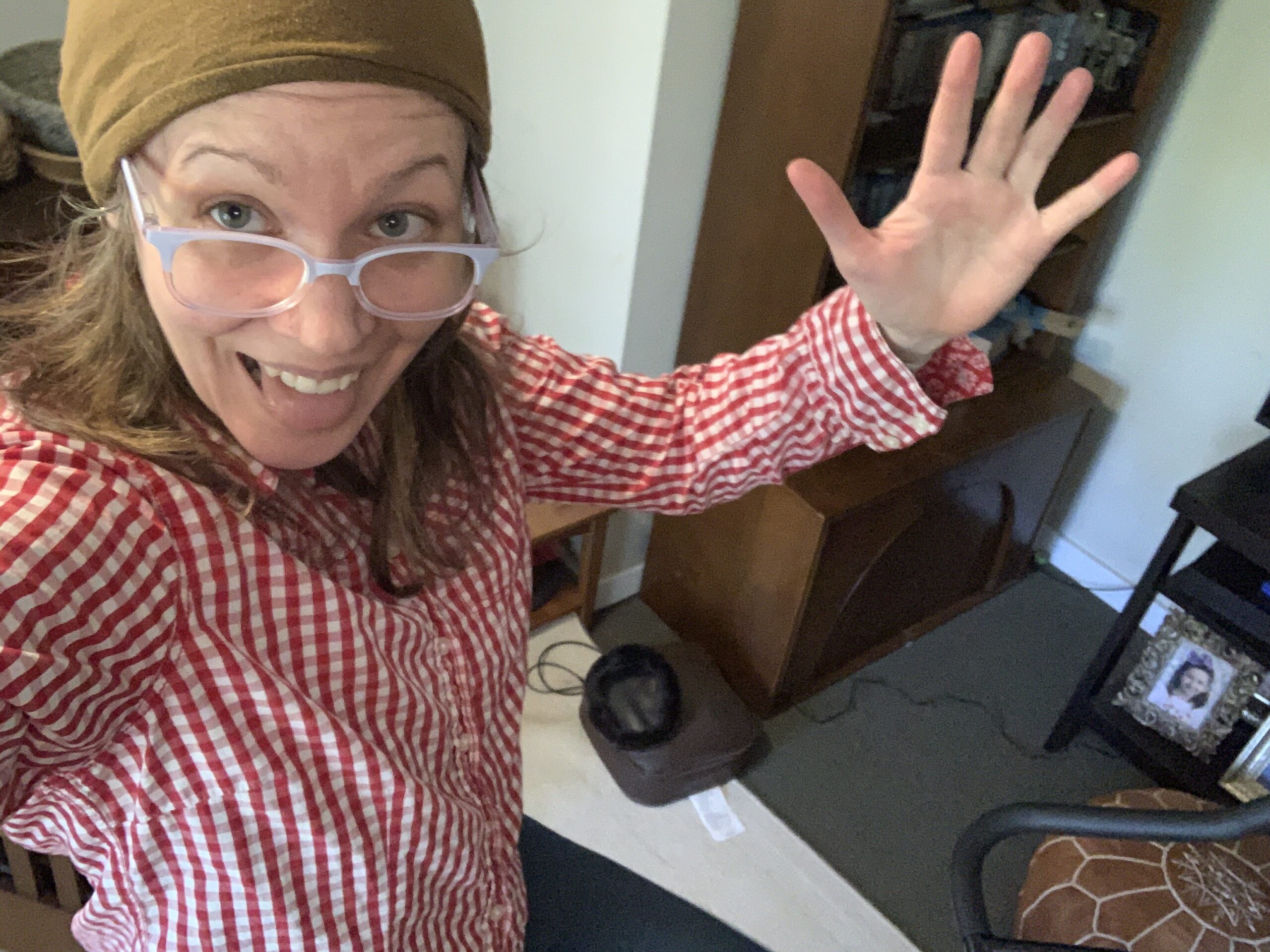 Are you frustrated? Maybe a little bit? I love seeing my neighbors out on their bikes more, but I’m frustrated our city isn’t giving more road ownership to pedestrians and cyclists during this unprecedented time.

I’m just now getting comfortable enough to bike anywhere for a 20-25 mile roundtrip, but I certainly can’t get my kids to go that far, nor would I want to in these conditions. How are you doing with the increased reckless driving versus less traffic? What about kids biking in it? Some kids on the 2nd grader’s classroom calls are saying they’re out biking all over on their own; but you have to take a kids’ statements with a grain of salt, you know? 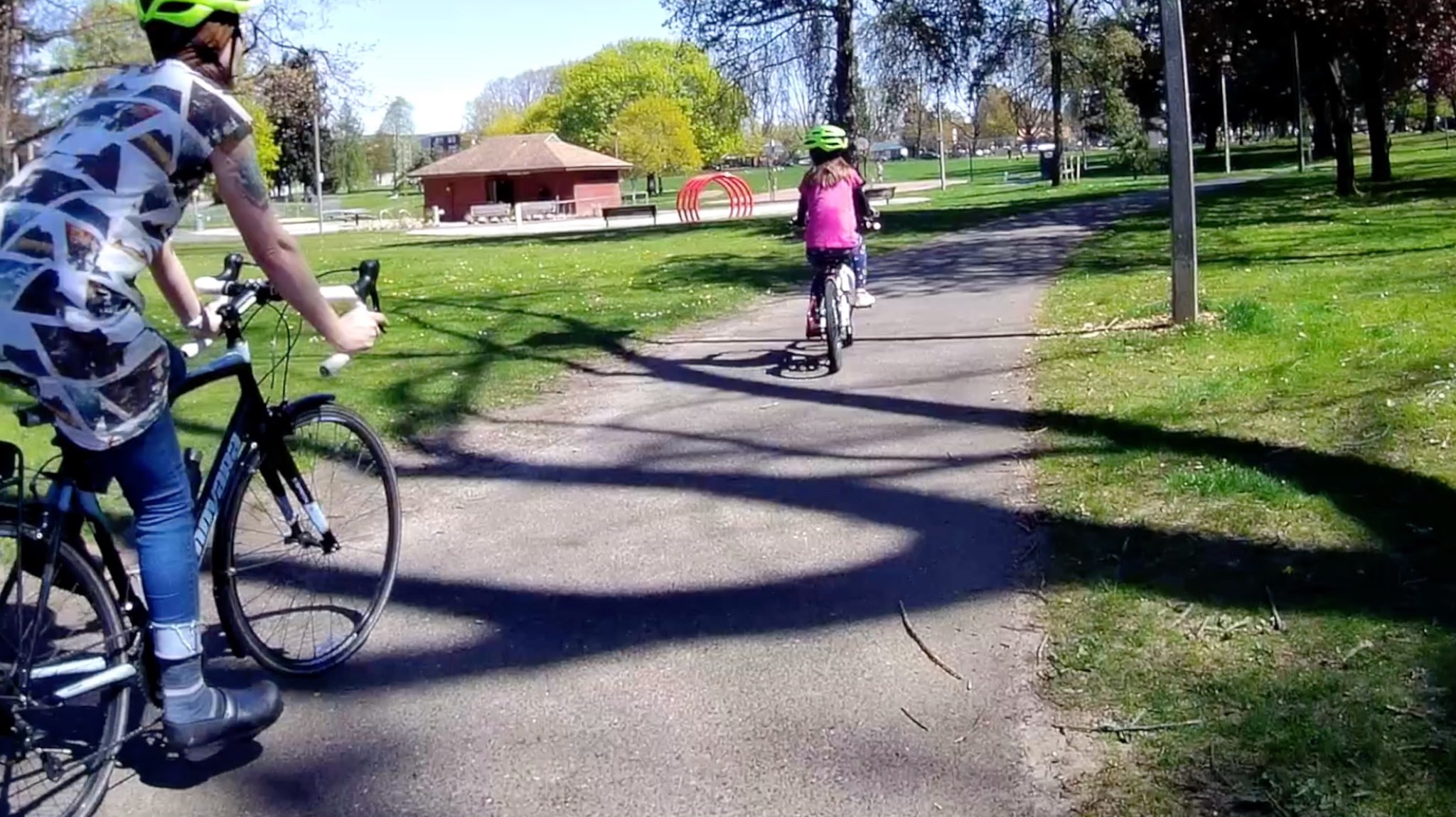 Insurance is a tricky thing, particularly in times of social and economic uncertainty.

When I first started, there were suggestions of getting some sort of insurance in the event I was hit by a person driving a car, and either they kept going or were under/uninsured. When I sold my car, my Geico policy offered ever so kindly to keep me on as a cyclist for $60 a month, which seemed pretty steep. Come to find out later, most insurance companies don’t even offer to cover you as a cyclist unless you also have a car. Isn’t that bonkers? Car insurance has always been my least favorite, so I find it difficult to believe there’s an avenue for making money they’re not exploiting. Maybe the numbers aren’t in our favor? State Farm and Farmers said they don’t cover without an auto policy. I called Cindy at a local Farmers Insurance office, and she said motorists, cyclists, and pedestrians are all covered under personal injury protection under the auto policy in addition to the required UM/UIM coverage. My research was brief and by no means exhaustive, but more for us to have a general idea. 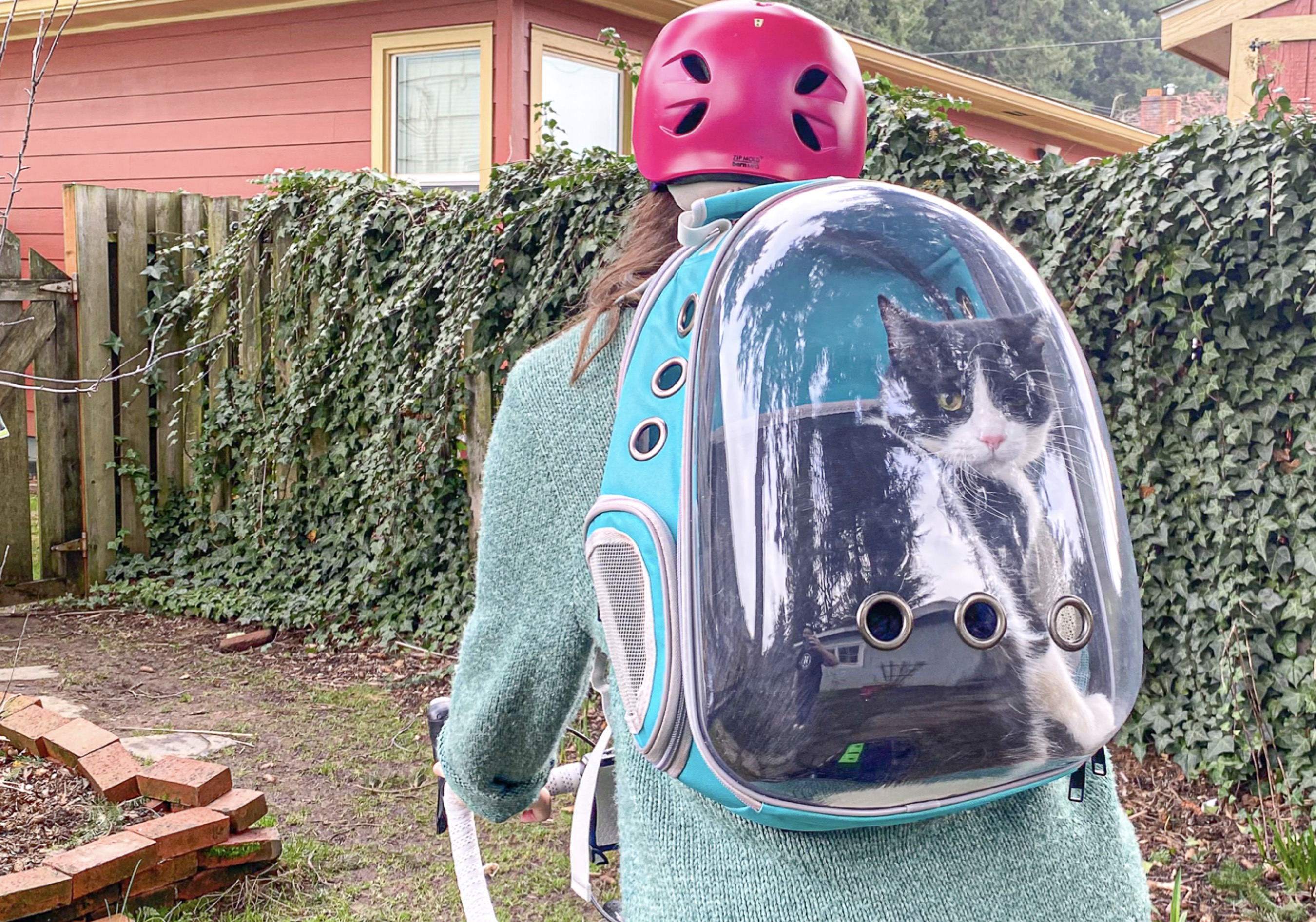 How do you do pet care without a car?

My cat is freaking out. 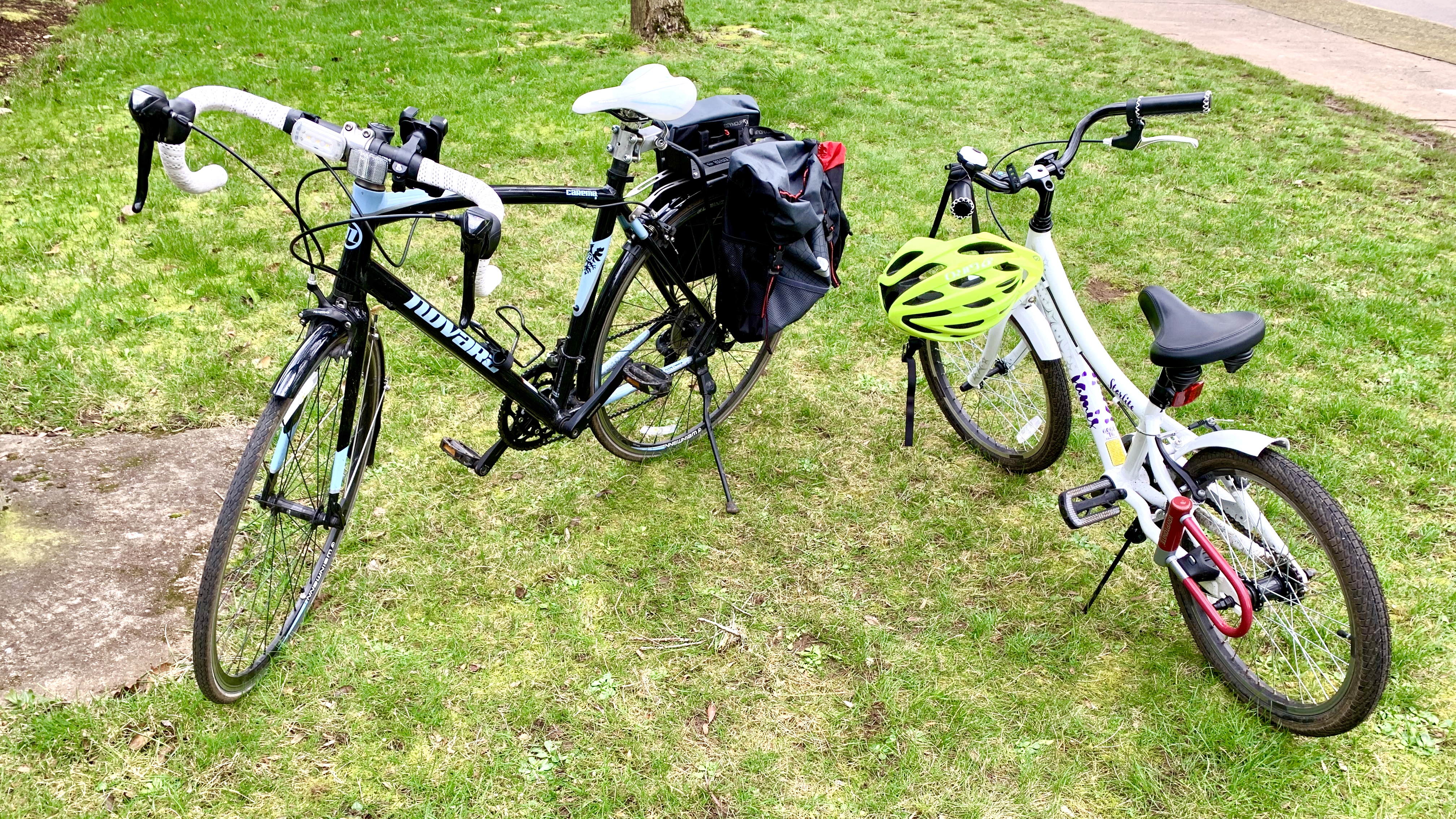 When I started this car-free adventure at the beginning of winter, I thought for sure my bike was not going to cut it. I thought it was a matter of time when I’d have to admit my little road bike just wasn’t the right bike for hauling groceries or getting me around town. I was 99% convinced I’d have to trade it in when I first started my daughter behind me on her little tag-a-long, and her lack of experience balancing nearly caused us a few bike dumps.

I had been looking up more “upright” and heavier/sturdier bikes, what I came to find out are called “mixte” bikes, when to my surprise, we all adapted rather quickly. My daughter started riding on her own, I got into a cadence with groceries, and I do really love having a super light and maneuverable bike when I want to go from North Portland to Montavilla. 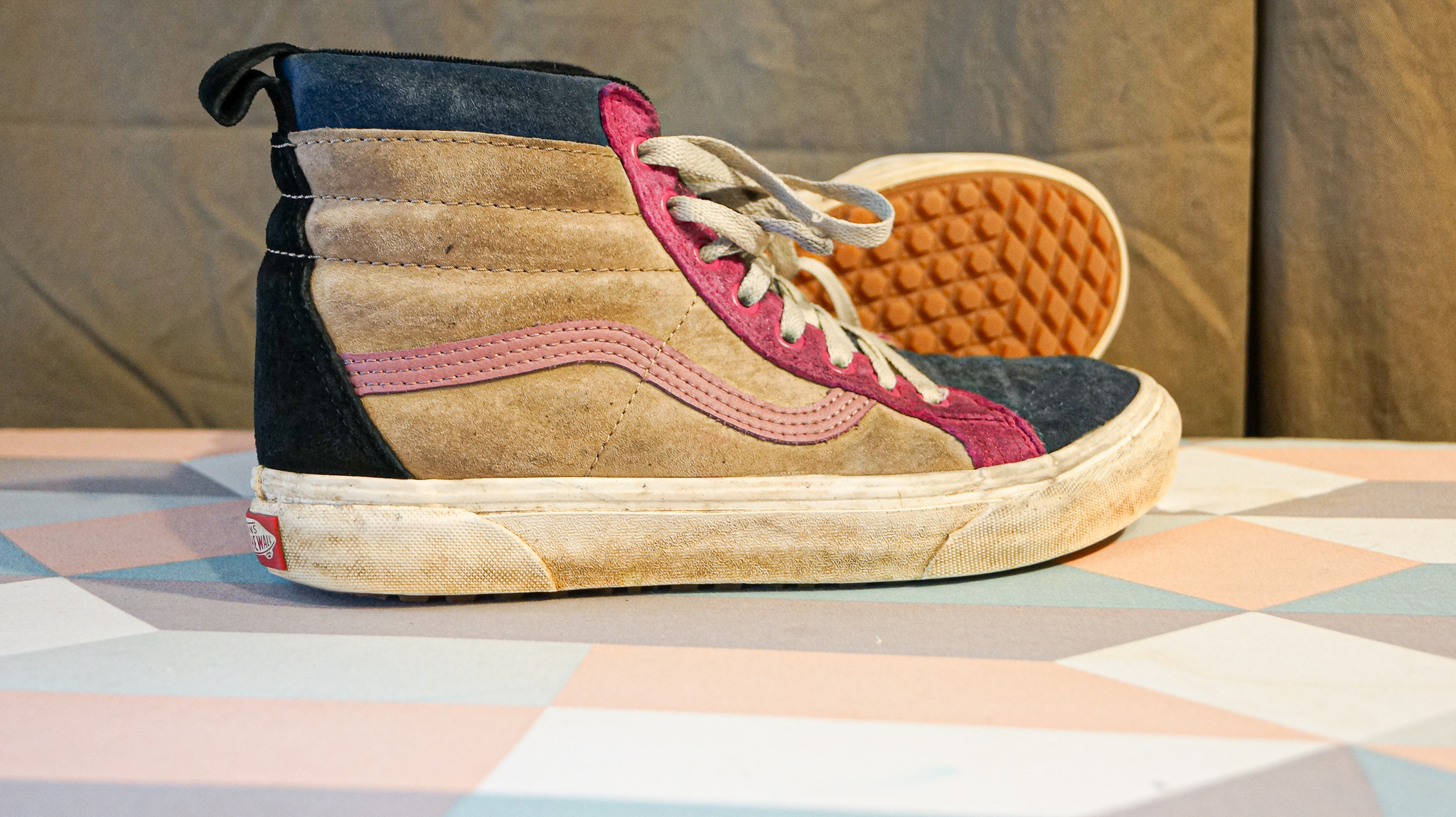 In the Pacific Northwest it looks like we’ve hit that time in spring when we alternate sunny weeks with rainy weeks, which gets me thinking about what changes are in store for biking in spring. Does anything even need to change?

For example, you’ve helped me join the biking community in winter, arguably the worst time of year to commit to being car-free. I took your advice and got a bike rack, water-resistant panniers, better suited clothing, and bike fenders. It took me a bit to figure out the wet-pedal situation. I was thiiiiis close to replacing my pedals, when for my birthday in January I got myself a pair of the snazzy all-weather Vans. These have been a life-saver. They have enough tread grip I no longer noticed my stock-pedals being slippery, and the water resistance and high-top saved my feet and ankles. As you can see, in less than 4 months, they look like they’ve been around. I found out later the Bike Shop Girl in Colorado recommends them too for winter cycling, which made me feel like I’m getting this bike thing down. 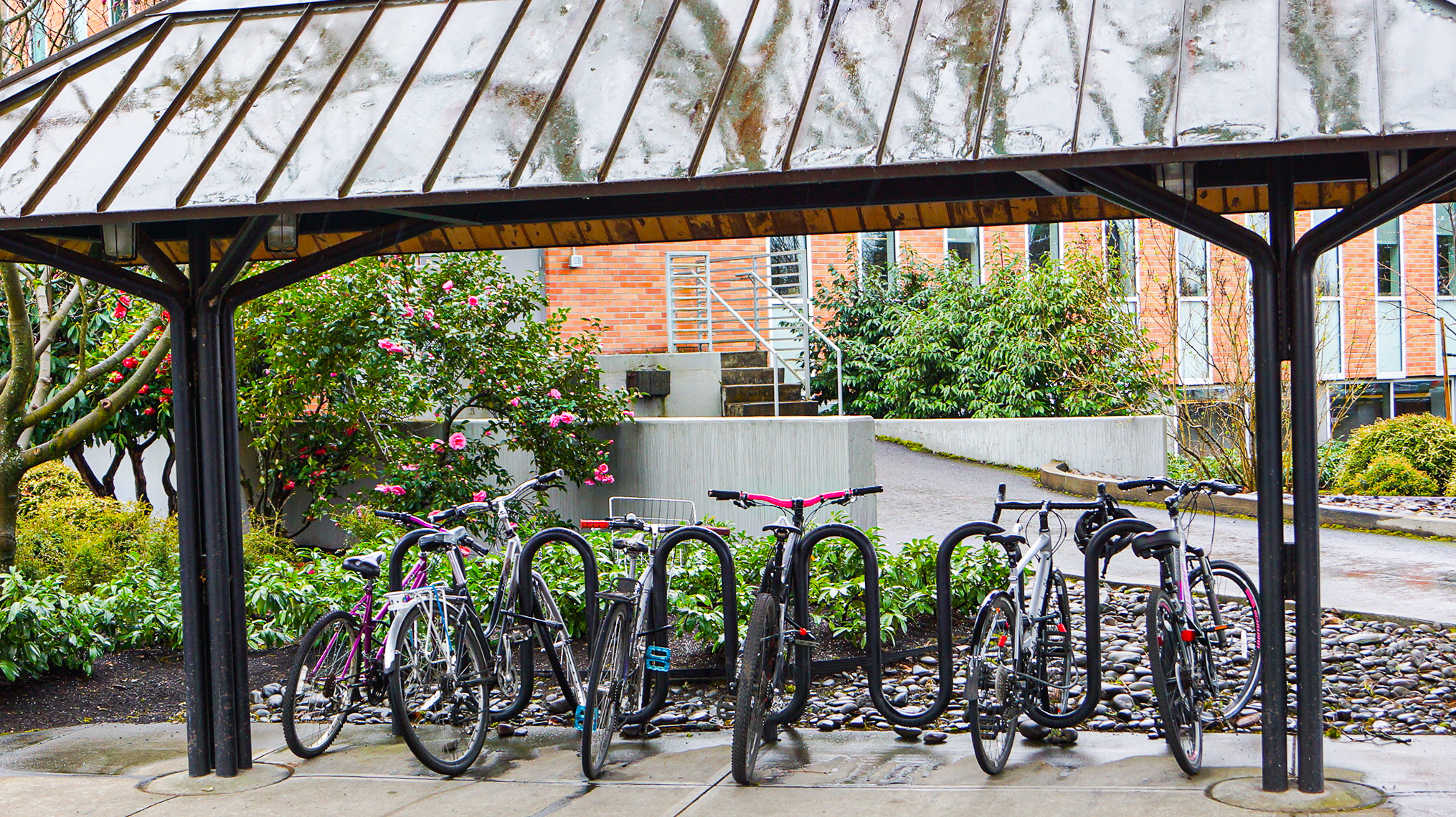 I imagine most of you bike because it’s just what you do and who you are. But what about folks who aren’t there yet?

Last week when we discussed freight intermodal transportation and compared it to multimodal human transportation, I left out some of my conversation with Clint Culpepper, the Transportation Options Manager at Portland State University. He left me with some choice phrases that brought up more questions for me.

Clint said PSU surveys show a decline in biking among students and staff. He suggested students are like an indicator species: When housing is less affordable and/or available around campus, fewer students bike to school. In Clint’s PSU transportation surveys, the bike-commute threshold was at about three miles, and as students are forced to live farther out, biking to school is less of an option for them. 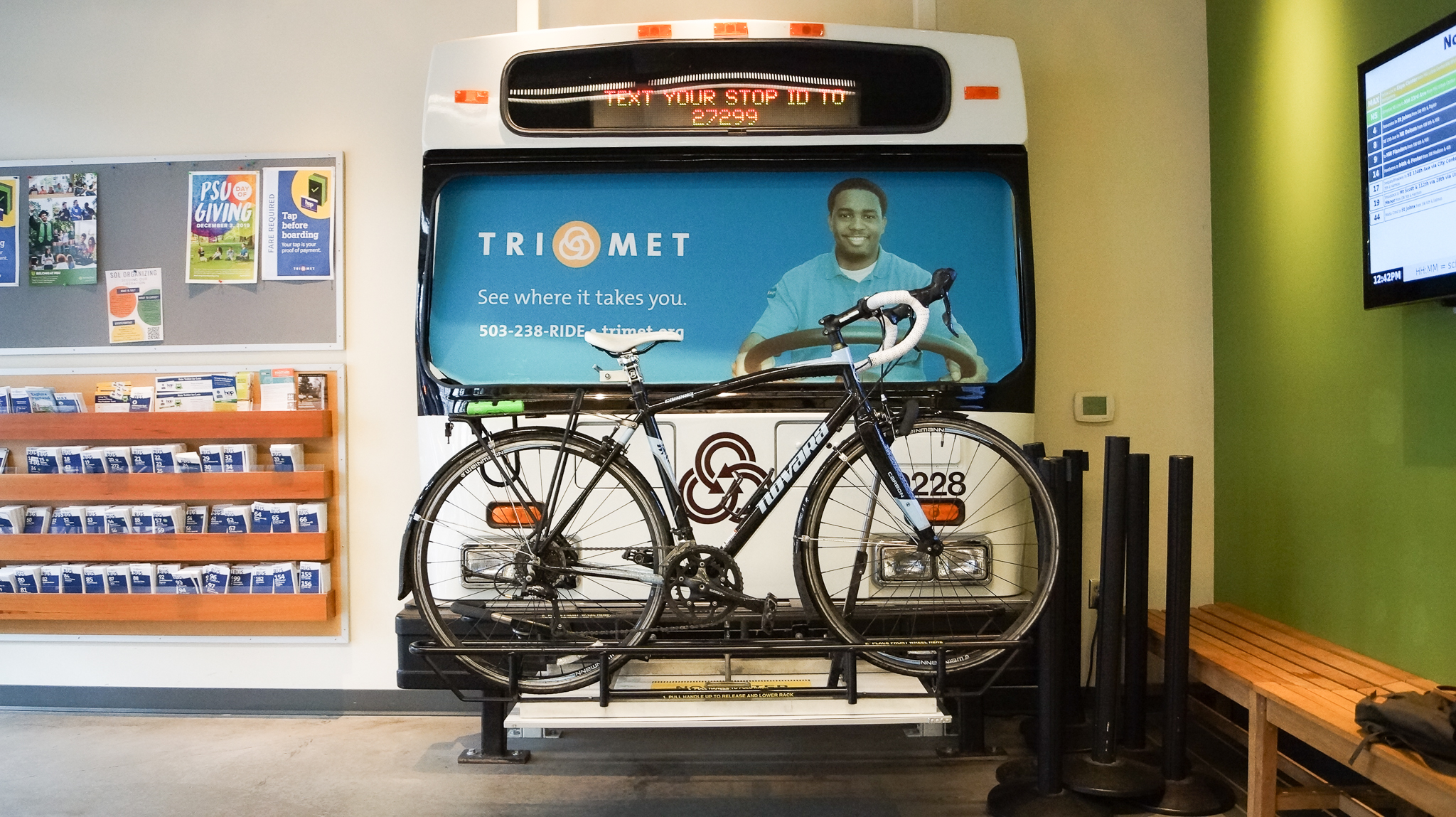 About 20 years ago I worked for Greenbrier, the corporate headquarters for Gunderson Rail and Marine on NW Front Ave here in Portland. I learned about — and loved — the concept of intermodal transportation. A steel box container can go from ocean barge to rail to truck, creating the most efficient mode of global transportation. Instead of specialized modes, intermodal always seemed more efficient to me.

So it just made sense that eventually I’d get to the point of traveling with my bike on public transit, thus making myself intermodal. 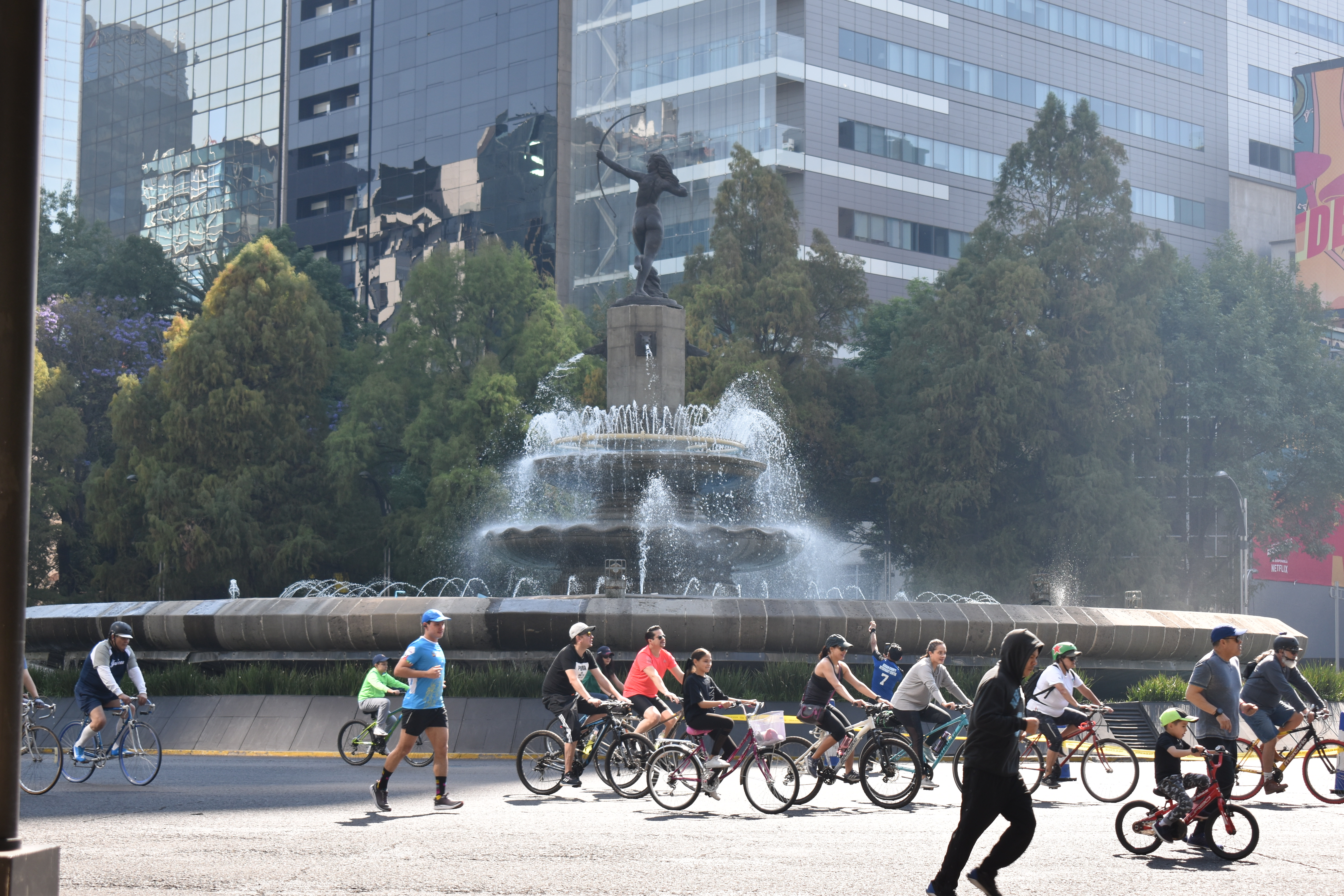 Our Pacific Northwest Fake-out February sure was glorious. There were a few days I ditched the coat and I’m missing it already. Looking ahead to summer, I’m so excited about this Pedalpalooza stuff. I’ve never heard of these things in my own city, and after last week’s talk about arm signals and bike camps for kids, all of this got me thinking about travel and vacations. Due to our payment plan, we will not be taking any extravagant vacations this year, but we do have an inexpensive and short trip to the Southwest planned.

I’m curious: Do you seek out bike adventures when you travel? Do you look for organized rides? Are you an adventure seeker and travel just for biking new places? If so, do you look for bikes to rent? Or do you ship your own bike? I only know of this last option because there are vans parked within a couple miles of me that advertise a service that will pack your bike for you and ship it. I had no idea that was a thing. 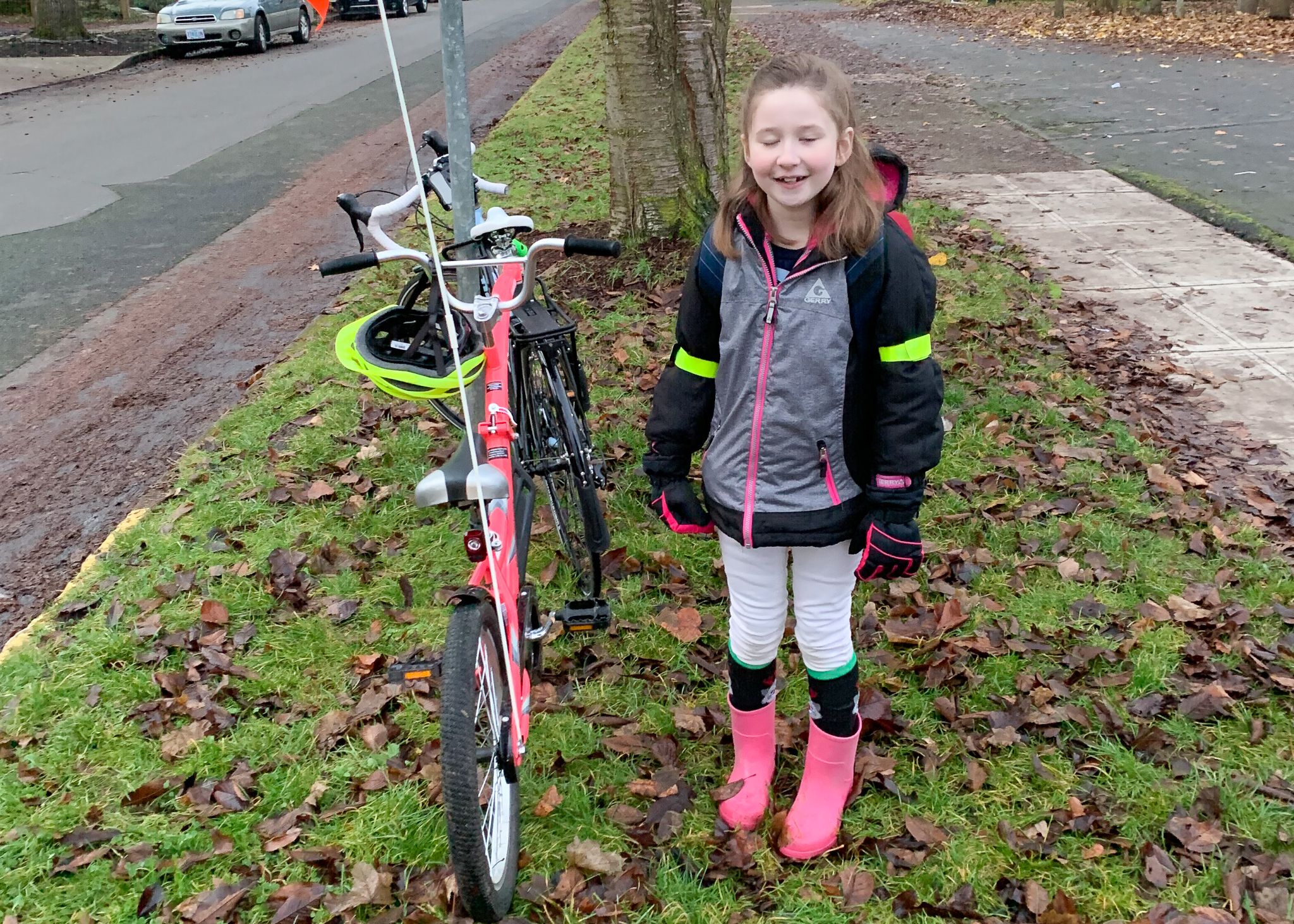 Humans are so weird. We pop out all clean and looking like fresh, blank slates, but really, there’s a lot already going on in there. I love when humans are surprising, and that’s probably the best thing about being a parent. Just watching them become whatever seed was already planted inside.

Let’s take the youngest here. She’s that kid that while you teach her things, you might think, “This isn’t ever going to take.” Then one day she decides that she’s got it completely down. One day she decided she was potty trained, and she was. That was that. Same with swimming, reading, and now biking. It took me four years and one day to teach her to ride a bike. Alternatively, it was four years of me confused and trying to re-word and explain the same concepts over and over — then a single day of her deciding she was a bike rider.