Nine years after their first e-bike pilot kicked off in Hamburg, Germany, United Parcel Service (UPS) is still testing whether or not electric-and-pedal assisted trikes can replace traditional delivery trucks in dense urban areas. Today at the South Park Blocks on the Portland State University Campus, the delivery giant hosted a large event to launch what they refer to as the “UPS Urban Solutions E-Bike” initiative.

In partnership with PSU and the City of Portland Bureau of Transportation, the initiative will deploy one electric-assisted cargo trike for a year. According to PSU officials at this morning’s event, UPS currently has two dedicated trucks that deliver packages within the university district. The intention of this new effort is to see if they can replace one of those trucks with an electric trike. UPS has launched similar pilot programs in recent years in Pittsburgh and Seattle and currently operates an e-bike deliver program in several cities around the globe including Paris, Berlin, London, Dublin, Rome, and others.

For their latest Portland pilot, a UPS truck will drop off a container full of four cargo pods in a staging area on the PSU campus. The trike operator will then load one pod at a time and make deliveries from the staging area. At the end of the day, a UPS truck will retrieve the empty pods and bring them back to the warehouse.

The trike shown at today’s event was a Truck Trike designed by Portland-based Stites Design, which we first profiled in 2010. UPS has partnered with Stites twice in the past: In a separate Portland pilot in 2016 and in a Seattle pilot in 2018. As we reported in September, UPS has also worked with the Rytle MovR platform, a German-designed trike made in Portland.

This morning’s event included a lot of public relations and marketing materials from UPS. There was a line of banners tracing the company’s history, a full spread of lunch for all the invited VIPs (with pre-printed lanyards for each one), lots of free swag, and a table urging people to apply for UPS jobs.

“We’re doubling down on our ability to go green,” said UPS Northwest President Joe Braham, who touted the e-bike initiative as part of his company’s larger effort to curb greenhouse gas emissions and improve efficiency in dense cities where larger vehicles are either too difficult to maneuver or are infeasible due to infrastructural limitations or local ordinances (i.e. carfree zones). When I asked Braham how this pilot would be different than any of the other pilots they’ve launched in other cities, he said, “That falls back on the partnerships we have with the cities.” As for the different bike platforms they’re testing, he said, “The trike we use depends on the context. We’re trying many different types of vehicles and we’re not set on any one thing. We’re learning as we go.”

This latest experiment is due to begin in a few weeks. Stay tuned for a report on how it’s going.

(In my opinion: Given the media attention and free advertising UPS receives every time they announce one of these new e-bike pilots, it makes me wonder whether the bikes are simply a greenwashing/marketing tool. It seems after so many years of studies and pilots, a company of this size would be able to either go big and deploy a real bike delivery program, or cut bait and end the experiments.)

Jonathan – what are the two “grab” bars on the rear of the delivery trike / trishaw? And also the panel above it?

That’s how they pull out the cargo pods. Here’s a photo from a press statement of them in action (not sure why they didn’t want to demonstrate the full pull out at today’s event). 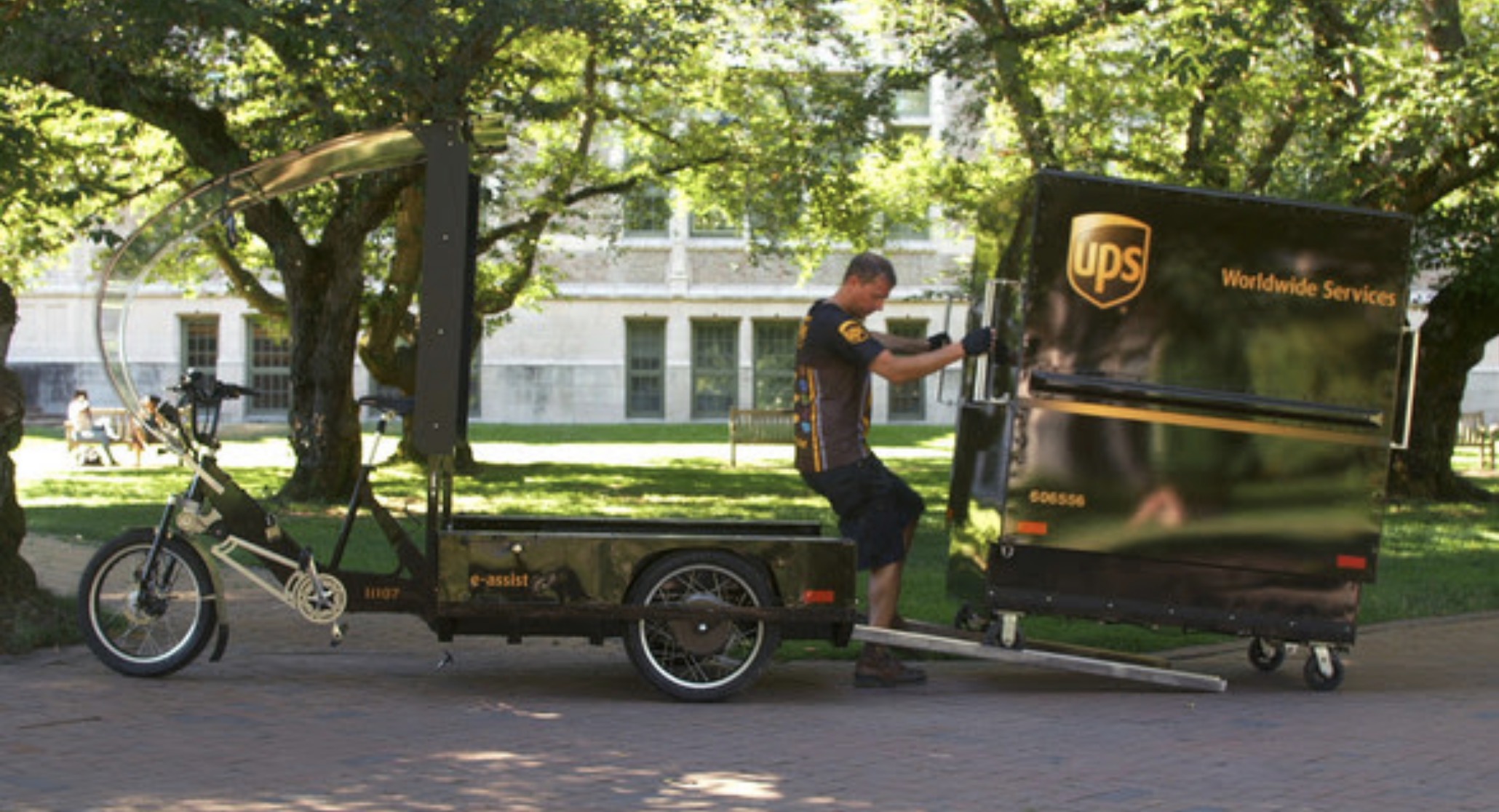 Jeez, get the poor guy a hand operated winch or something.
This whole rig looks like it was designed by a blacksmith.
Can you imagine fighting this battle 10 hours a day during the holidays?

Seems like they have some bugs to work out. Clearly this is not safe. The operator could slip, the bike could topple, the cargo bin could get away from the operator. What if the bin had “hiding” wheels like an ambulance gurney?

Chris I
Reply to  Hotrodder

As an industrial engineer, I don’t see a huge problem with the photo above. It isn’t ideal, but it also doesn’t look like it would be a violation of my company’s ergonomic guidelines. Keep in mind that that cart would be heaviest when rolling down the ramp, and fairly empty and light when rolling back up. A winch would not be necessary.

Sometimes it seems like our society is trying to eliminate all body movements. This job is pretty much ideal from a physical perspective. You get to ride a bike, walk, and use your core/upper body muscles regularly. None of the motions look like they would overwork a healthy adult.

PS. These UPS cargo pods are just like the old way that the USPS delivered mail on foot (and bike) with the green relay boxes you still see [abandoned] on some city sidewalks …

“[I]t makes me wonder whether the bikes are simply a greenwashing/marketing tool.”

Given the business model is totally dependent on continuous subsidized carbon pollution, I also “wonder” that. But one thing I know: Your commitment to the principle of impartiality is admirable.

I also wonder if you feel your mission requires you to cover this “event” as “news”? Or would you feel free to simply issue an opinion piece (or weekly summary note) about it, given it’s apparent role in the overall political/marketing process?

I can cover stuff however I want. And I hear you about not giving this attention. That can be tricky though, because people deserve to know what’s going on and once I start letting my hunches and opinions have too great an impact on “news” coverage then I think I do a disservice to the community. In this case, given that PSU is involved and people I respect are behind it, I think it deserves the benefit of the doubt. I will be following the pilot closely to see if anything comes of it and I will remain skeptical of UPS motives until I’m convinced otherwise.

It seems like you contradicted yourself in that you’re saying you covered it as news because you felt that’s what others expected even though you don’t believe it. I’m sure you will correct me if I misunderstood. If you do believe it’s corporate greenwashing, is covering it as a news event doing a disservice to the community?

What I believe isn’t always black and white. I think it could very well be greenwashing and there was a ton of corporate PR that really rubbed me the wrong way… But it could also be a legit program. I’ve made the mistake before of letting my hunches dictate my editorial decisions 100% and that is very perilous. I’m trying to use caution here and report the event as I saw it, while making sure people who read the report know that I’m a bit skeptical about it.

It seems to me that it is “legit” in the sense that, if it is a cost-effective means of delivery, they will implement it more broadly. But that doesn’t change the fact that it won’t alter their status quo business operations of moving large volumes of freight around the world using fossil fuels. And unfortunately, the status quo just won’t work for us anymore. Does that idea ever influence your reporting decisions?

Chris I
Reply to  The Dude

It sounds like you need to start your own blog. Or do you prefer to just critique the work of others?

Jason
Reply to  The Dude

Hey, if you don’t like the story, go make a website and write your own. 😉
You’ve made some salient points, but you’ve had your meal. Time to push away from the table.

Jonathan, since you seemed to have an opportunity to ask Joe Braham questions about this project, did you ask him to respond to your suspicions (which are shared by many of us) that these perpetual tests are just a greenwashing campaign?

good question! I tried to, but I didn’t have a lot of time with him and I don’t think my questioning was as good or strong as it could have been. One of my flaws as a journalist is that I tend to believe most people are good people and they want to do the right thing. I’ve gotten a lot better at seeing through bullshit over the years, but I still haven’t mastered the art of questioning subjects the way I sometimes want to. It’s hard!

I appreciate the answer, Jonathan. I lasted all of two weeks in an Intro To Journalism course before I dropped out because the first assignment was to interview a stranger and I got way too nervous over it. So I can only imagine how difficult it is to ask someone tough questions you know they won’t be happy being asked.

They started as a fleet of bicycles and people on foot. Just getting back to their roots.

And also night delivery by street car / trolley when the [private] transit services were closed.

I think it is a cool idea in areas with congestion like most of inner Portland. I think it looks a little bit too wide to be a welcome presence in bike lanes.

Sounds like a good reason to widen the bike lanes.

What if the streets were bike lanes and cars were only allowed as intercity travel?

Even the deepest red quarters of America want sustainable energy.

My point: the less cynical reading is simply that it’s about the money. Emissions are just a happy side benefit where solar is cheaper than coal or bikes make more sense as last mile vehicles.

If we banned cars in the central city, awesome trikes like these would be the largest vehicles on the streets.