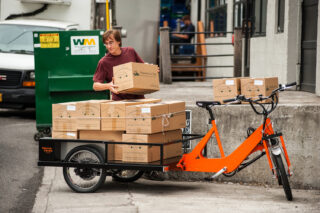 In a partnership with the City of Seattle and University of Washington, delivery giant UPS announced today they will use pedal-assist, electric cargo bikes to make deliveries around Pike Place Market and other parts of downtown.

The best part about this news? The bikes being used in this pilot program come from Portland-based company Truck Trike.

Here’s more about the delivery program from a UPS press release:

“While we have launched cycle logistic projects in other cities, this is the first one designed to meet a variety of urban challenges,” said Scott Phillippi, UPS’s senior director of maintenance and engineering, international operations. “The modular boxes and trailer allow us to expand our delivery capabilities and meet the unique needs of our Seattle customers. It’s exciting to return to our roots – UPS started in Seattle in 1907 as a bicycle messenger company. We’re looking forward to being able to offer these customizable urban delivery solutions to other cities nationwide.”

Seattle Mayor Durkan said, “As Seattle grows and public and private megaprojects limit capacity on our downtown streets, this pilot will help us better understand how we can ensure the delivery of goods while making space on our streets for transit, bikes, and pedestrians. We are eager to learn how pilots like these can help build a city of the future with fewer cars, more transit and less carbon pollution.”

Southeast Portland resident Bill Stites is the man behind the Truck Trike, a concept he’s been refining for about a decade. We visited his shop in 2010 and the last time we heard about the Truck Trike one was being shipped to New York City to be used as a Citibike bike share rebalancing vehicle.

Stites’ creation can haul a payload of around 750 lbs with its combination of flatbed and versatile trailer.

The Seattle pilot program will last for a year and its impacts on improved delivery reliability and congestion reduction will be evaluated by the Urban Freight Lab at University of Washington.

UPS is no stranger to Stites’ work. The company used a customized version of his Truck Trike for a separate pilot program launched in Portland in 2016.

For a look at the innovative design and features of these amazing, pedal-powered machines, check out TruckTrike.com.

Your caption is a wee inaccurate. Given that some of your local electricity (admittedly a minority of it) is from fossil fuels and the vehicle manufacturing process involves energy, might not “low-emission” and “low carbon footprint” be a bit more accurate?

And don’t forget the burritos eaten by the rider.

OK David. Changed the caption to, “… and doesn’t spew toxic exhaust into your mouth as it passes.”

An excellent turn of phrase!

I like it because it grudgingly accepts your valid critique while at the same time skipping over the fact that electricity is far from unproblematic or clean.

Bill, your hard work is paying off!

I’m particularly interested in the pike place market delivery mention. The fact that cars and trucks are allowed into the market at all is simply insane, and it’s nice to see that there is work being done to mitigate this absurd practice.

I won’t go back until they close that street to cars. It is absolutely absurd. You can barely move inside of the market, and when you finally spill out onto the street, you have to dodge tourists in SUVs who are, what, looking for parking? Trying to drop off passengers so they can avoid walking a few blocks?

locals that work there do.

How much stuff could Madi stack on one of these?

Vote Up0Vote Down  Reply
« After he cut someone off, man claims he was victim of harassment and tire slashing
Weekend Event Guide: Freak Bike Fall, cyclocross doubleheader, e-scooter throwdown »