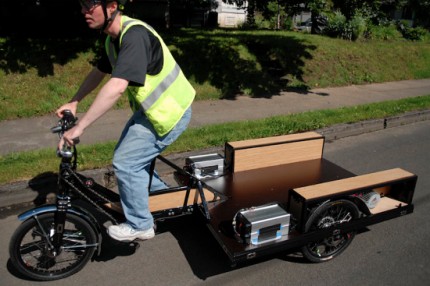 In a small shop in Southeast Portland, a new type of electric and human-powered vehicle has been created — and it could change the shape of urban cargo delivery and bike-based businesses in cities across the globe. It’s called the Truck Trike and it’s built by Bill Stites.

For Stites, an 800-lb capacity trike is a culmination of decades of thinking. “In some ways, I’ve sort of come full circle,” he said during a visit to his shop yesterday. 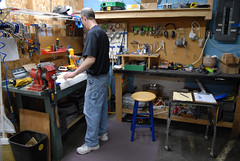 Stites in his shop.

Stites was one of the pioneering pedicab operators on the streets of New York City back in the early 1990s. Following his pedicab stint, he built up a chiropractic business making house calls by bike. It was also during that time when he met noted pedicab and cargo trike designer George Bliss. Bliss — who coined the term “critical mass” in 1992 and is sort of an East Coast version of Jan VanderTuin, who runs the Center for Appropriate Transport in Eugene — became Stite’s mentor.

With knowledge gleaned from Bliss, Stites made his way to Portland in 1997 where he met another brilliant bicycle mind, TerraCycle founder Pat Franz (whose Cargo Monster recumbent I profiled back in November). In 2002, Stites launched Stites Design and he and Franz have shared shop space ever since (Sacha White of Vanilla Bicycles also worked out of the same shop until moving recently). 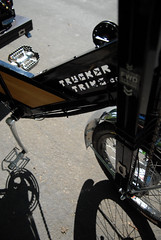 Stites has become an expert in combining three-wheeled, human-powered vehicles with electric assist. In recent years, he’s built a number of custom trikes and he’s done contract work for e-bike systems built by Portland-based Ecospeed and Stokemonkey. “I’ve been lucky to be part of the e-bike renaissance that’s happened in Portland over the last few years.”

Stites’ Truck Trike is far more than just a three-wheeled bike with an electric motor slapped onto it. It was built from the ground up to be an efficient and versatile vehicle suited for a number of uses. The first production model, which I saw and rode yesterday, was delivered to B-Line Sustainable Urban Delivery today and will be used daily for their growing business.

Before it got delivered, Stites and I rode it to Laurelhurst Park. He wanted to show me how well it got up the hills.

When you pedal the Truck Trike, your legs drive the front wheel. Give the throttle a push with your thumb and a surge of power comes from the rear.

After the large rear platform (that B-Line will fill with an enclosed cargo box), the first thing you notice about the Truck Trike is the unique front-wheel drive system (above). The front wheel is powered by the patented StitesHub. The StitesHub is a combination of a fork (fillet brazed by Sacha White) which holds a universal joint that sits above the head tube. The universal joint bends in the middle and has cogs on each side (one to drive the front wheel, one that goes back to the cranks). The benefit of this system is that the joint captures all steering flex and you feel no steering pull.

In the rear, each wheel has its own “power pod.” Stites has put a separate power source to each rear wheel so there’s no axle or differential to get in the way of the main cargo deck. This also allowed Stites to lower the cargo floor, reducing its center of gravity.

Stites uses the Ecospeed electric motor system to power both rear wheels and he can offer variable gear ratios depending on each trike’s intended use (heavy loads, lower gears). Batteries are not included with the Truck Trike because Stites wanted buyers to have the option to run whatever type they wanted. Anything will work, including standard lead acid car batteries. 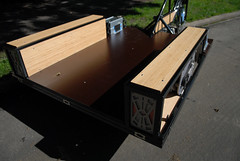 At 48-inches wide and 105-inches long, the Truck Trike has a large footprint on the road. To help it play nicer with other vehicles, Stites has developed a set of rear taillights that work just like those in cars, complete with running lights and turn signals.

As for those steep hills in the park, the Truck Trike handled them with ease. Of course, we didn’t have any cargo on board, but Stites says it’s been tested by B-Line at 400-500 pounds and it’s made to handle plenty more. This is due in part to the 48-hole Phil Wood hubs and a quality build job by Jude Kirstein of Epic Wheelworks.

With so much power from the dual electric motors, I asked Stites why he doesn’t just go all-electric:

“The human power is an important aspect for me. First, it’s highly efficient and the portion of human power is significant. It’s also healthy… And if you run out of juice, you can still get home.”

Stites says the optimal way to ride the Trike is to pedal all the time and only use the electric power intermittently. He also pointed out that he purposefully built the Trike to still qualify under Oregon law as an electric-assisted bicycle as opposed to more highly regulated vehicles like mopeds.

With his first one already sold, Stites is confident his Truck Trikes will take off. His main market is cargo delivery, but he also sees it as perfect for point-of-sale and pedicab businesses.

The Truck Trike retails for $7,800 with one motor and $8,800 for dual motors. You can learn more about it and see photos during production at StitesDesign.com. Watch the slideshow below for more of my photos taken yesterday:

*Please note: Stites has recently changed the name to Truck Trike. It was Trucker Trike, but he decided to change it after a friend and local bike rack maker told him about his company with a similar name (Trucker Racks).

e-bikes: Cause sometimes you just need a boost.

wow… I love the innovation built on an old idea and making it better… I’m looking forward to seeing these around portland very soon!

It’d be more impressive to see it with a full load tied down (I don’t see anything to tie down to in the photos).

Congratulations, Bill! It is looking fabulous.
Here’s to many more.

Bill Stites is a genius, and in addition to his own designs, he’s given a leg up (or should we say electric assist) to like-minded design professionals. Bill helped Aaron Tarfman with the frame for Aaron’s Transformation Trike (Aaron did the design, Bill assisted with frame fabrication). Stites is also a member of the Belmont Business Association and is involved with a number of civic activities.

Awesome trike, Bill – can’t wait to see it in person!

Come see the Truck Trike in person at Cirque du Cycling this Saturday on Mississippi Avenue. Bill will be in the Art Bike Parade which starts at 3pm.

Slots are still available if you’d like to join in on the parade! Get in touch.

For those of you with kids, the FREE Family Ride starts at 1:30 from Grand Central and afterward the kids will have the option if joining in on the parade.

Front-wheel drive! That is very cool. Wouldn’t that be a boon for some MTB applications? (E.g., climbing steep trails where typically you can’t stand up because you’ll lose traction to the rear wheel.)

Or, what about a drive train that powers both the front and the back wheels? That’s right, 2WD!

Love this trike. I do wish it was big enough to carry a sheet of drywall, but I suppose that’s probably not the intended application. Beautifully put together though.

Thumbs up fo’ ‘lectric-assist. Over-‘gineered front-end and upright positioning? Not so much.

Here’s the more elegant solution from down under. http://www.trisled.com.au/flatbed.html

Using a U-joint at the top of the forks: Brilliant!

Why not a version of the Ape with electric drive?

I’ve seen this thing up close and personal, and also had the opportunity to see/hear engineers drooling over some of his design decisions. This is an awesome design, and I look forward to sharing the road with it.

@Al, my take, is that its initially for a local business interested in a truly sustainable local delivery solution. You can’t realistically put pedals on a 1,000+lb Piaggio. So, when Local=Portland & Portland=Bike, why convert yet another heavy half-century old vehicle chassis? When you can instead tap a number of local resources to build a reasonably lightweight and sustainable power-assisted vehicle? 🙂

Disclaimer: I have ZERO financial ties with Stities Design, I just think he builds some awesome stuff.

I too have seen this up close and personal, and have also witnessed onlookers’ moans of delight.

Seems to be the next phase in local delivery; I love that it can tow so much and that the driver can get a workout while at work. It’s like getting paid to exercise!

So, who has the world’s first electric delivery-bike?