There was a mix of chaos and contentment in the neighborhoods around the bluffs of North Willamette Blvd this morning. Residents seemed thrilled that the City of Portland had finally done something significant to end the scourge of cut-through drivers; while many drivers were befuddled and beside themselves at their newfound inability to use small neighborhood streets as shortcuts on their way to work.

Over the weekend the City of Portland began installing diverters at two intersections as part of their North Willamette Neighborhood Greenway project. In an attempt to create low-stress conditions for walkers and rollers and encourage drivers to stay off residential streets, PBOT has prohibited some turning movements from drivers at N Villard and Willamette and N Jessup and Atlantic. Both diverters are meant to keep drivers on Rosa Parks Way and Greeley.

When I rolled up on the new Villard diverter this morning crews were still putting on the finishing touches. 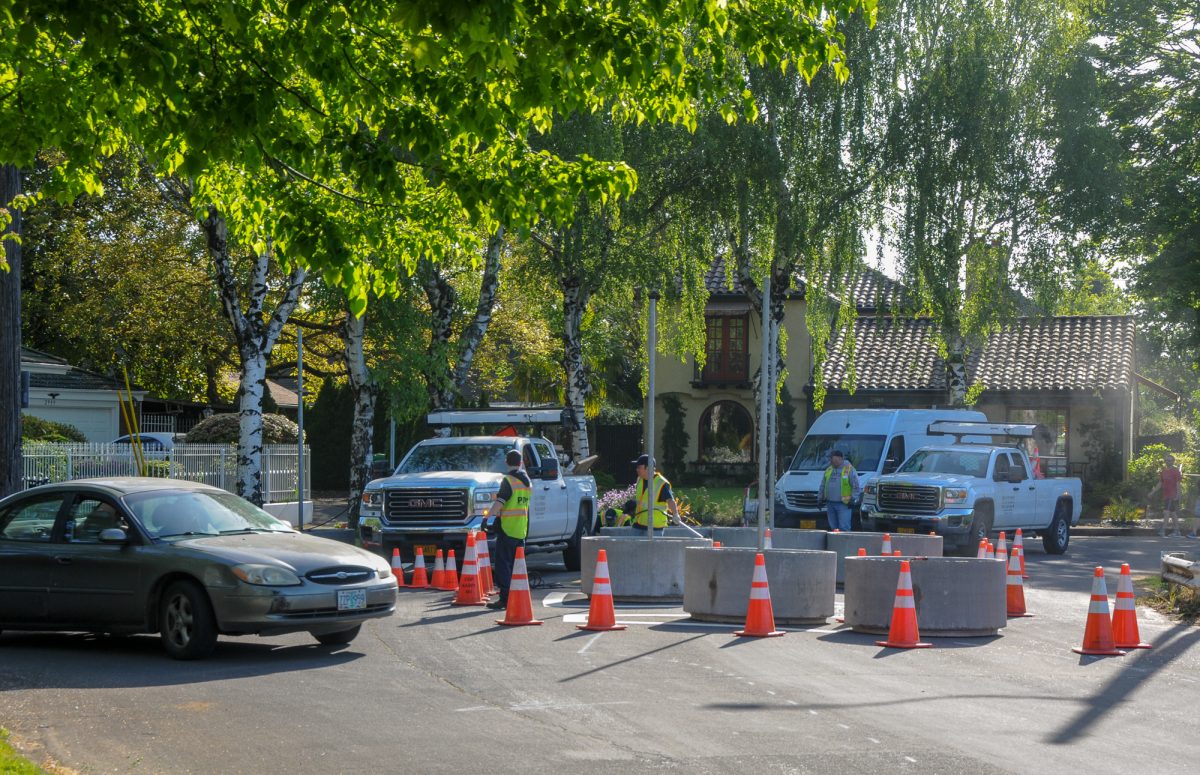 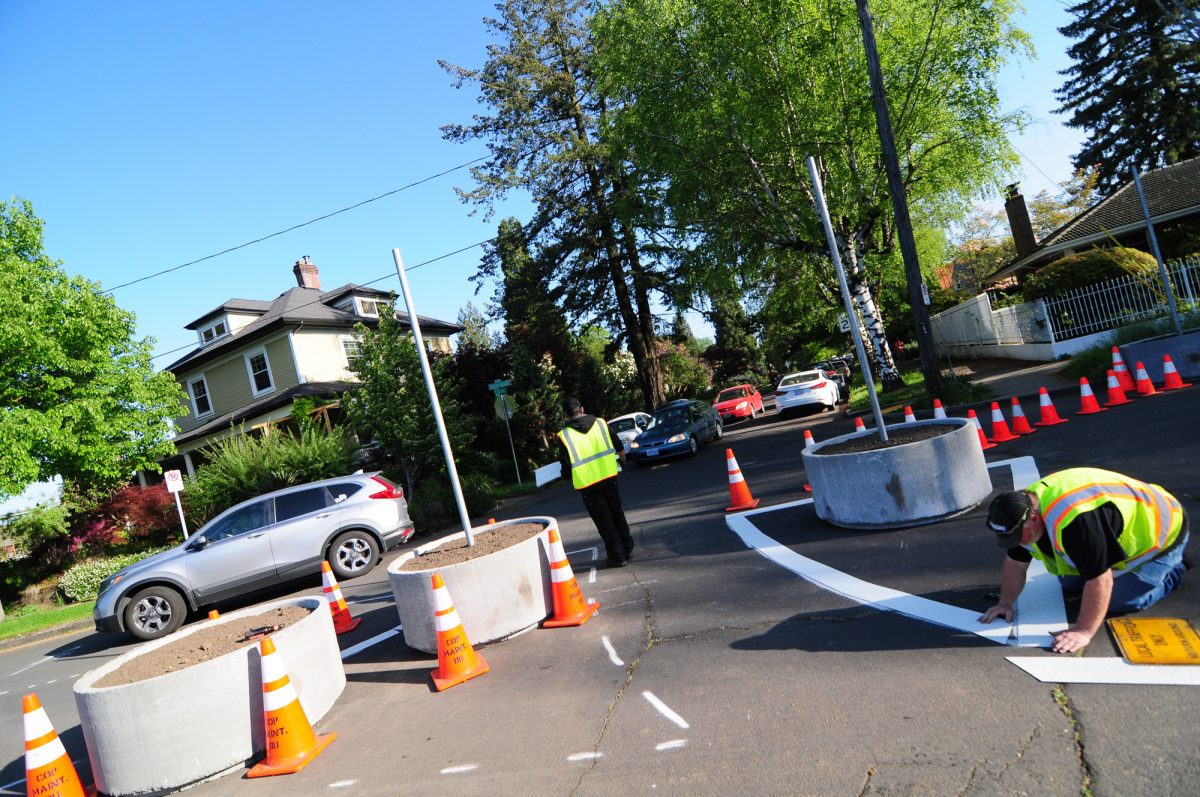 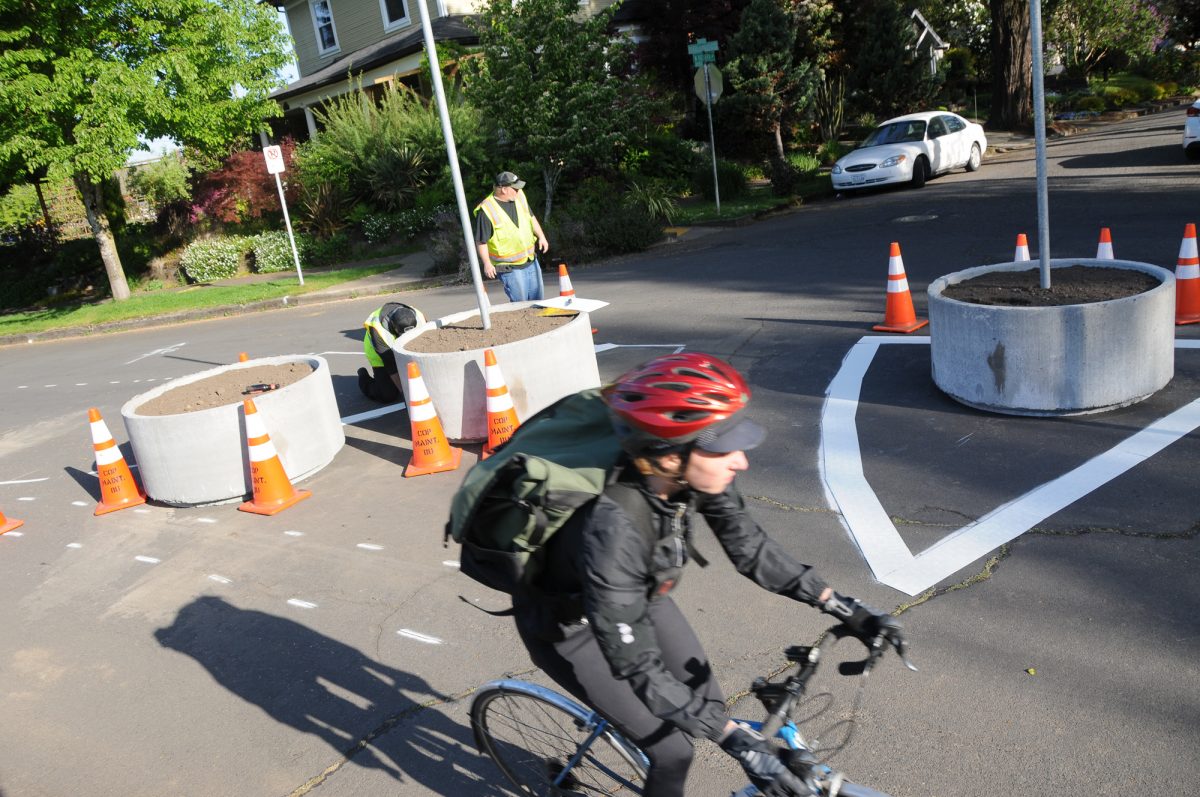 For the steady stream of drivers coming southbound from Rosa Parks, the inability to turn left (eastbound) at Willamette threw some for a loop. People tried to turn around on the narrow street as soon as they realized they couldn’t go left (because driving around the block would have been too hard?). Others sped away angrily. One man rolled down his window and shouted at me: “This is just going to make people mad! We’re just trying to get to work!” 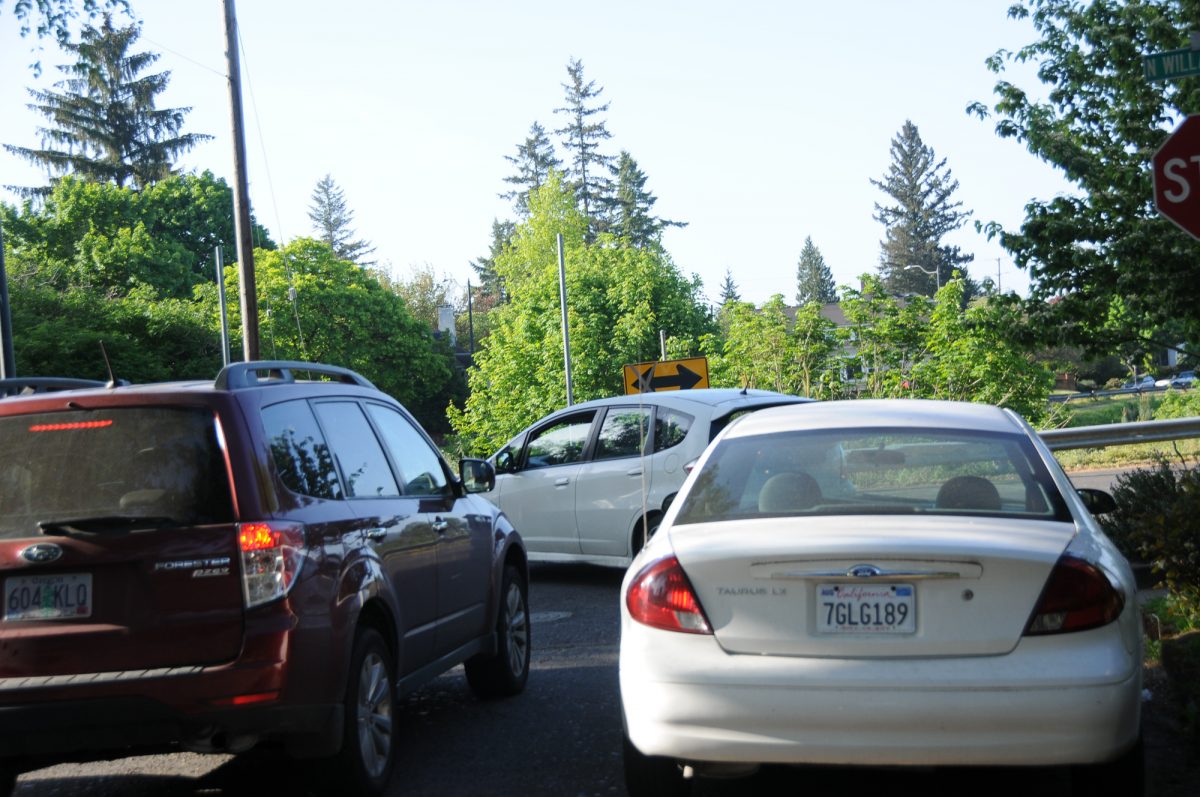 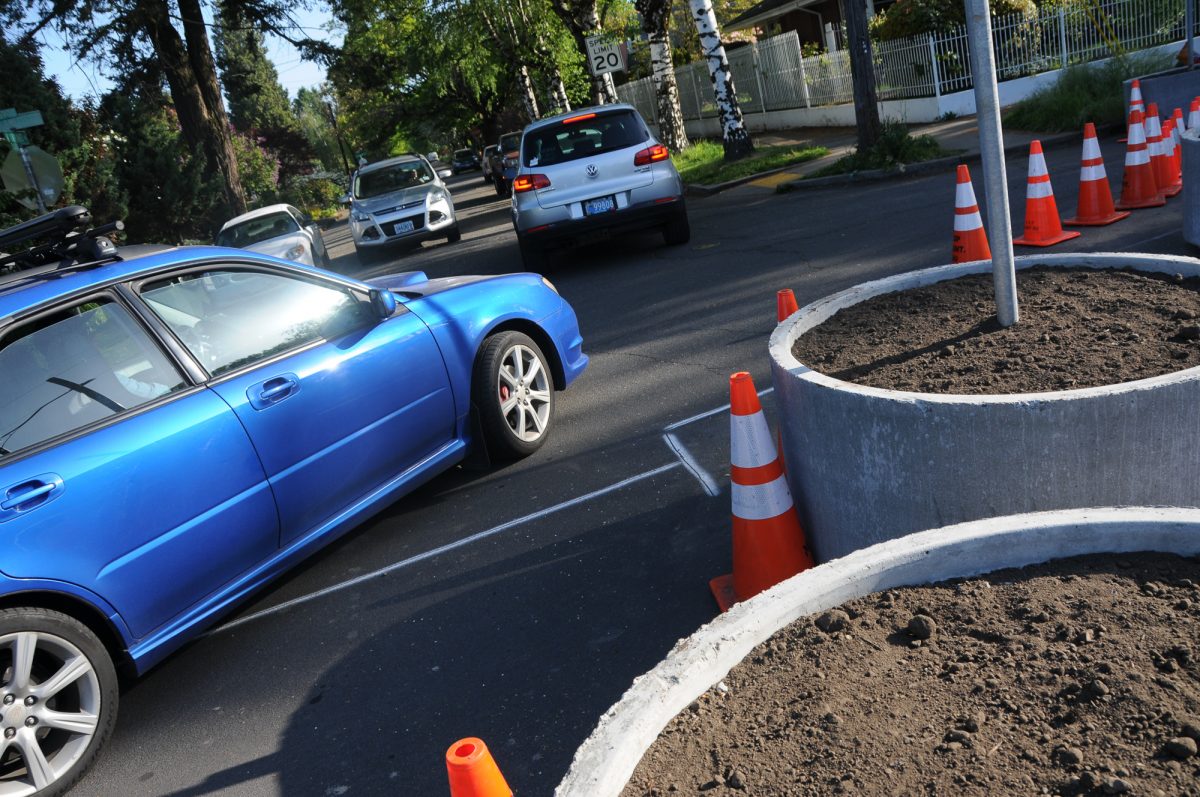 It’s very tight when both lanes are being used by drivers. 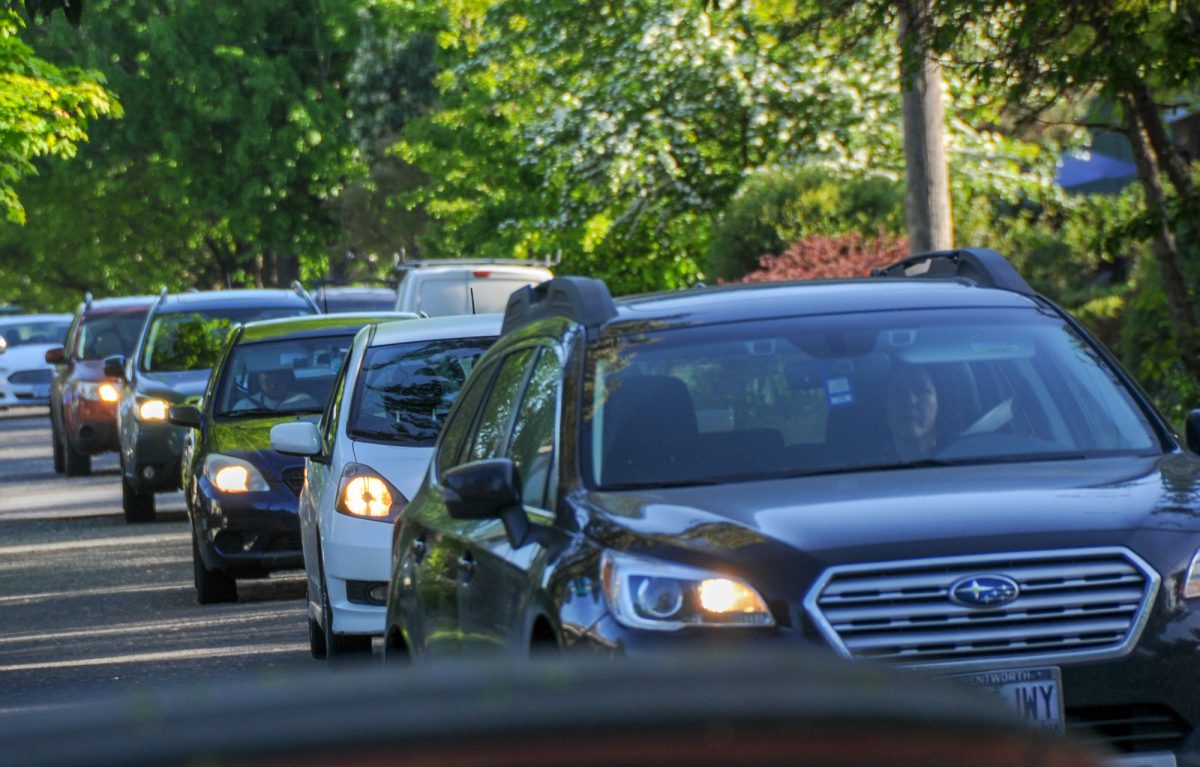 The morning march of cut-through drivers on Villard about to discover the diverter. 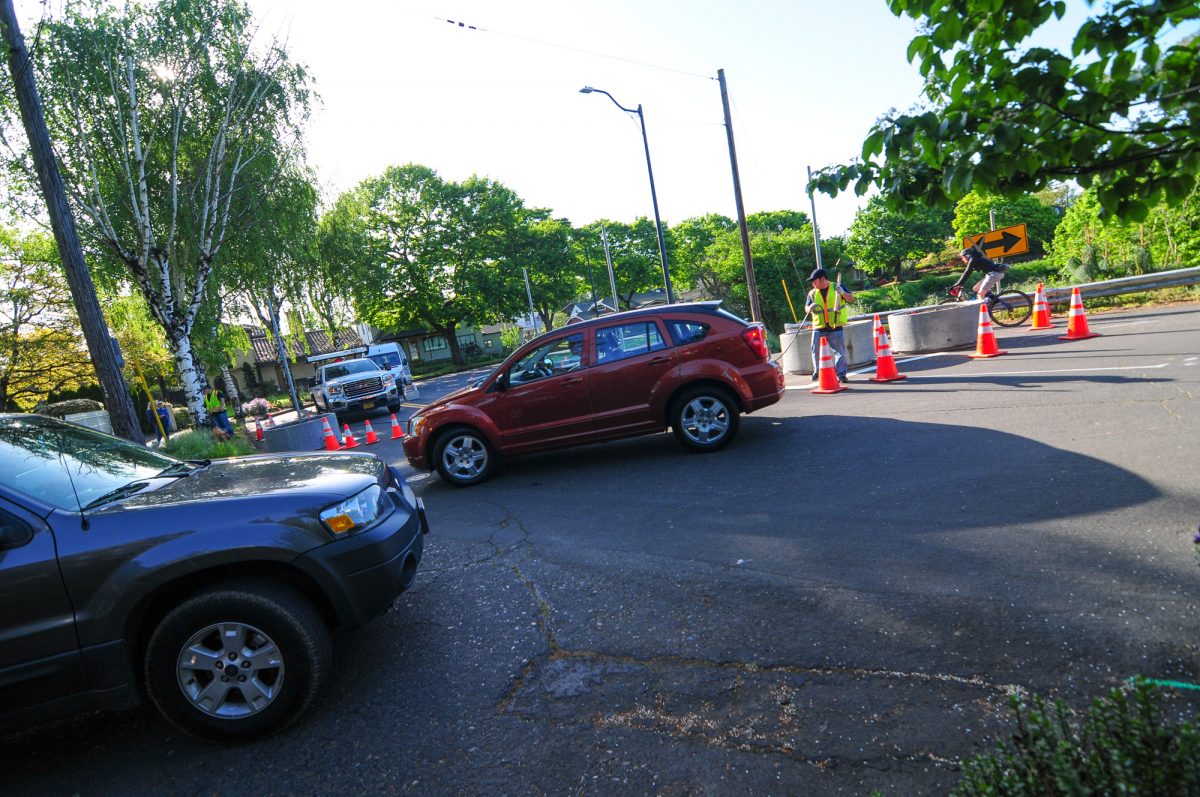 Outside the cars however, it was a nice morning and neighbors were out talking to one another and walking their dogs. I met Hazel (a dog) and her owner Dave. We stood in the street (you can do that when drivers aren’t allowed to have their way) and he was clearly happy about the change.

“It’s just so irritating how people use this street to fly through. We call it the ‘flyway’ because drivers have no regard for people with kids or pets,” Dave shared. “Yes, it will affect us too, but we’re willing to make the quote-unquote ‘sacrifice,'” he added. 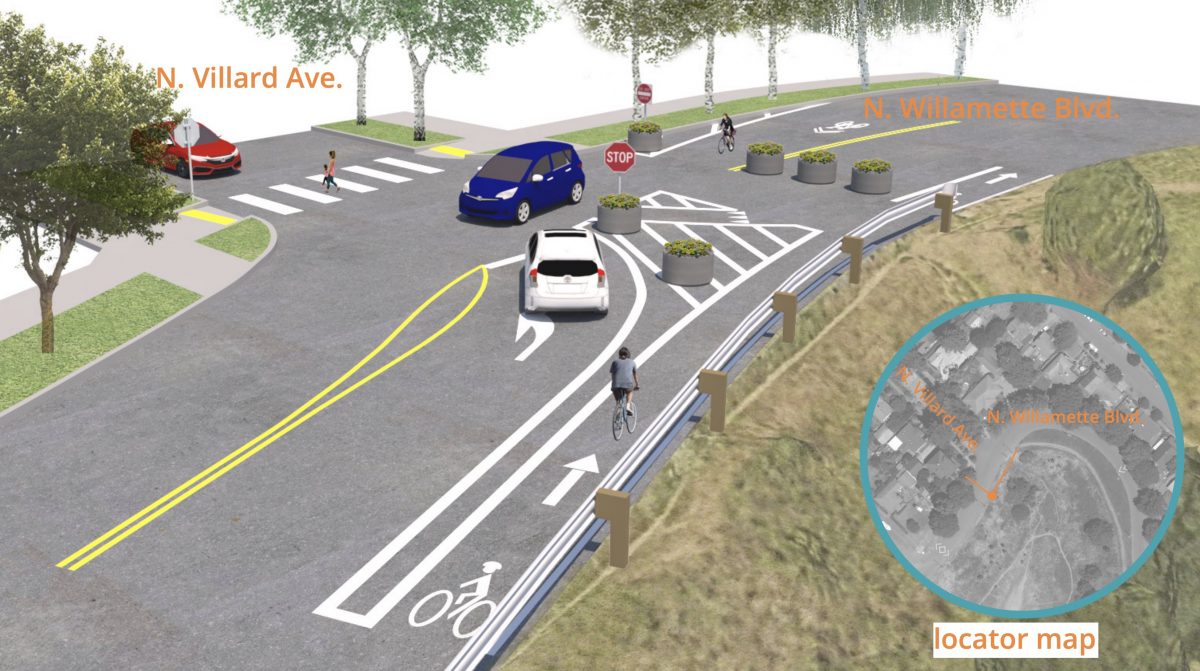 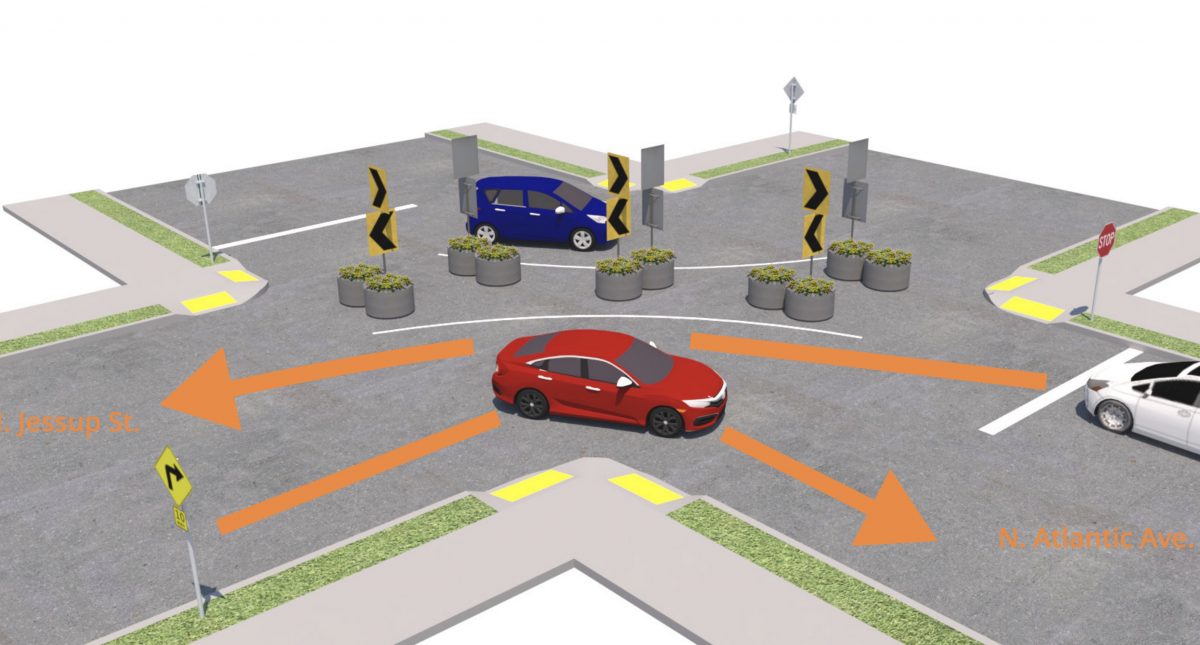 I also overheard two women on the sidewalk: “I just hope they [the drivers] all find a different way to get to work,” one said. “They will, eventually,” replied the other.

As you can see in the final design rendering, the new diverter on Willamette prohibits left turns from Villard. It also forces drivers going east on Willamette from continuing south toward Jessup or Killingsworth. Bicycling access is maintained in all directions and there will be a bike-only lane striped for southbound Willamette.

One design issue PBOT might need to address is that people turning left from Willamette (northbound) onto Villard don’t have much room when someone is also turning right onto Willamette (westbound). It’s very tight. Perhaps forthcoming lane striping will help. Or perhaps it’s fine because

PBOT took this step after a traffic analysis showed unacceptable volumes and speeds of drivers. Two blocks north of the new diverter at Willamette and Villard, 69% of drivers were going over the posted 20 mph speed limit. You might recall Villard was the street where someone ripped down and defaced “20 is Plenty” signs one year ago.

Another diverter has been installed just a few blocks away at N Atlantic and Jessup. Drivers try to avoid congestion on Greeley Avenue by taking Atlantic to Killingsworth. A couple who lives near that corner today was eager to share their approval of the diverter. “This would usually be all backed up by now,” said a man walking his dog as he pointed to Atlantic.

Instead of people in cars idling bumper-to-bumper on small, residential streets, people were out on foot enjoying the sunny morning.

Signs, education, and threats of enforcement can only do so much. Concrete and physical barriers are what it takes to force behavior changes and reduce the harmful impacts of driving.

Let’s do more of this! And when our larger, collector streets become too crowded maybe we’ll finally get the political and public will necessary to dedicate more space to cycling and transit.

UPDATE, 5/7: PBOT has completed the installation. Here’s what it looks like as of today: