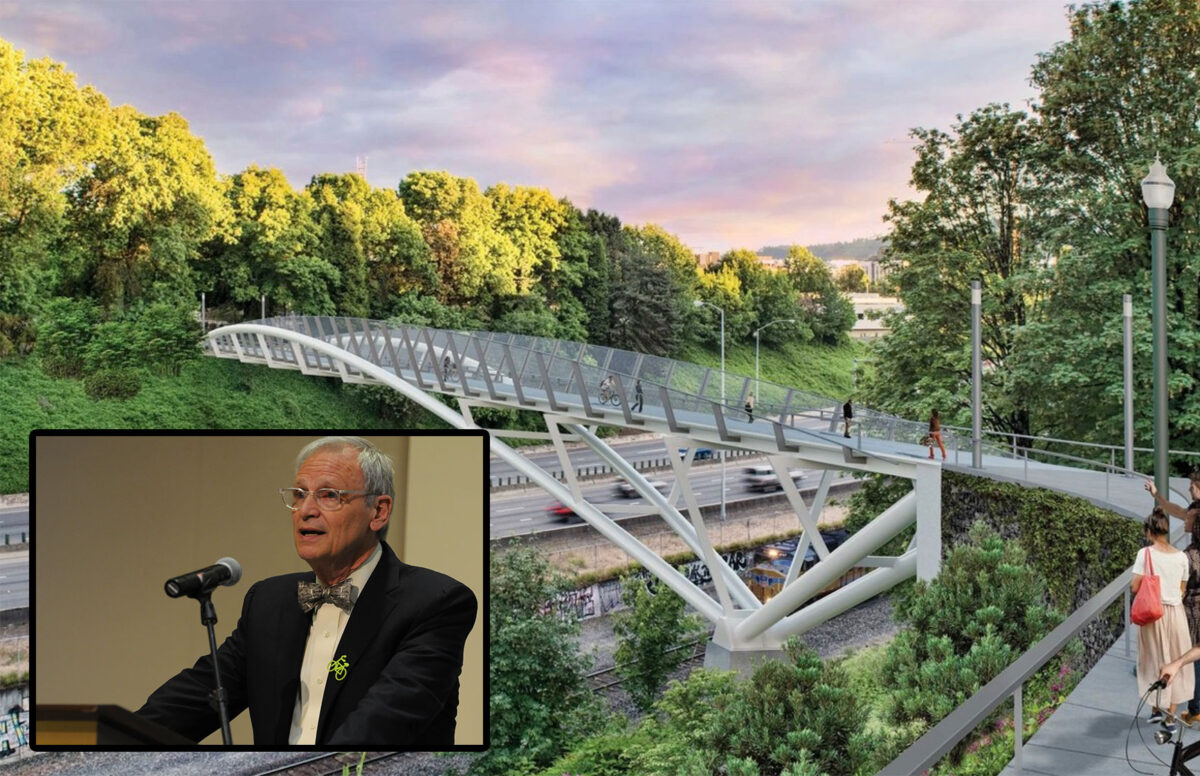 Yesterday evening Portland City Commissioner of Transportation Chloe Eudaly announced that the soon-to-be-built carfree bridge over Sullivan’s Gulch and I-84 will be named in honor of U.S. Congressman Earl Blumenauer.

“To have my name associated with that bridge will be a great honor.”
— Earl Blumenauer, U.S. Congressman

Currently known as the Sullivan’s Crossing Bridge, the $13 million project is slated to break ground this summer and be completed by the end of 2020.

Congressman Blumenauer is a transportation icon in the Portland region for the legacy he created as city commissioner-in-charge of transportation from 1987 to 1996. His vision for transportation — one that favors public transit, bicycling and walking over driving — has left an indelible mark on our city and his work continues to influence people, politics, and projects today. Rep. Blumenauer is by far the loudest and most effective voice for bicycling on Capitol Hill (he’s currently pushing a major overhaul to the tax code so it does more to encourage commuting by bike). He’s co-chair of the Congressional Bike Caucus and his legendary Traffic and Transportation Class at Portland State University has churned out well over 1,000 graduates.

People who’ve taken that class include many of the planners, activists, elected officials (including Commissioner Eudaly) and policymakers who will take this bridge project over the finish line.

Asked this morning for his response to this major honor, Rep. Blumenauer said (via text message): 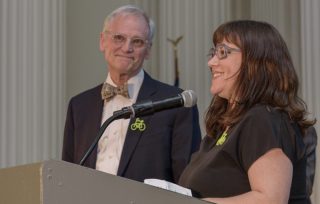 “To have my name associated with that bridge will be a great honor. I have been agitating for and dreaming about that pedestrian bike crossing for decades. It makes so much sense to connect Lloyd District with that rapidly changing area on south side of the freeway.

It will add an important dimension to the walking and cycling experience, and be a powerful visual reminder of our commitment to transportation connectivity and the bike and pedestrian experience.”

Speaking about the bridge in a story published by the Willamette Week earlier this month, a Portland Bureau of Transportation spokesperson said, “It’s going to really be a postcard-worthy bridge that marks a key entrance to Portland. As people arrive in the city and either drive or take light rail, one of the first times they’ll see the downtown skyline, that view will be framed by the new, modern Sullivan’s Crossing bridge.”

Make that the Earl Blumenauer Bridge.

Actually, Commissioner Eudaly’s office says the official name is yet to be determined. What do you think it should be?

(Note: This story will be updated soon with a comment from Commissioner Eudaly.)

Well deserved. For brevity, may we colloquially call it the BlumenBridge?

We already have breakfast on other bridges.
Will this new bridge invite “Happy hour on the Blumenhauer”?

Well, that was supposed to be a very enthusiastic smiley, but apparently those can’t show. (I added it as text mh – Jonathan)

It is great to not have to do this posthumously.

I love Earl, and am very happy to have voted for him every election in the past that I was eligible.

However, I don’t quite understand why we allow living politicians to have things named after them. Name recognition is one of the most powerful parts of incumbency and it seems to make it even harder for primary challengers. Where I grew up in Virginia, you had to have been retired from public office for 20 years before things could be named after you.

I’ve always found it in poor taste to name anything paid for with public funds after any living person, including and especially agency staff and politicians. C’mon Portland, you can do better than that!

I have the same take on this. I think we have a long list of folks we can recognize with this kind of public project and while Earl is cool, I think we can do better.

Lots of politicians get bridges named after them, but I can’t think of one who would be as genuinely pleased with that particular honor as Earl.

(Especially it being a bike-ped bridge. I think he’d actually be ticked if the city had named a car bridge after him!)

Earl is fine on bikes and a lot of other stuff BUT, our federal reps like Earl, Wyden and Merkley are not helping at all with the biggest problem in Portland which is the homeless mess…
It is a national problem , not just ours and we need national solutions and local help.
I wish our Reps would do something about this… Anything…

I don’t think we want any national solutions to homelessness with the Orange One in the white house. I agree that something needs to be done, but now might not be the right time.

I agree. While homelessness might be a problem nationally, I think the best solutions will come locally – just wish someone…anyone…locally had a few solutions to try. National assistance can come in the form of grants to test/implement programs. But I doubt we’re going to get much assistance from the feds.

Why is it a federal problem? It’s OUR problem that local politicians have decided to nothing about except lie to our faces. We are a city of enablers.

Do you think all these folks camping and doing heroin are all locals?
Do you think the same crowd in Seattle, SF, Dallas Texas (20,000 or so),
are all locals?
We have a National Opiod problem, why as a taxpayer in Portland am I supposed to pay to take care of and fix people who come up I-5?
We are all in this together, our Reps should help the local cities with this problem.

I hope this only tangentially-related thread will move to a more appropriate home. We’re talking about a change in name only, a salute to a long-time active transportation advocate.

Earl is a nice guy…
He has not done anything for cycling in Portland for about 10 years at least..

I think they should put a big metal bowtie on it, right in the middle.

That made me grin. One percent for art – a bowtie would be the perfect installation.

That is a beautiful bridge, and naming it for Blumenauer is a great idea.

Did you see Willamette Week gave lots of space to people complaining about how new cycling infrastructure will do nothing for Portland? Nice of them.

Earl Congrats! [Though I wish the designers had added a belvedere in the middle for a social viewing spot out o the traffic way…and it could have been the knot to the bow tie. 😉

There’s something about one person, Chloe, having the authority to make such a consequential and visible decision, that just seems unAmerican to me,

You want to have a public vote on every little thing? Oh, maybe we can have dozens of neighborhood association meetings before we put a stupid name on a bridge?

You’re asking for government waste. We don’t live in a democracy. If you don’t like the actions of your elected officials, vote them out.

Seems like quite a rant over a simple observation…
Naming a bridge after a living still serving congressman is cult like…
He is not a lifetime appointment to congress and I like him, but
the bridge should not be named after him.

Call it like you see it: The Bowtie Bridge.