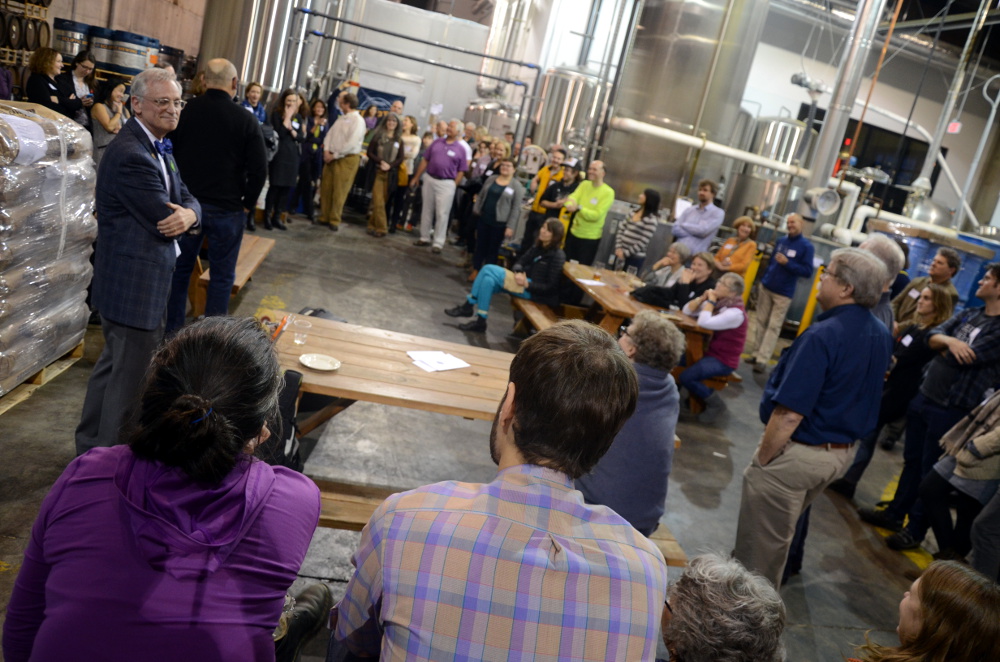 The one-of-a-kind free transportation class funded by the Portland Bureau of Transportation is celebrating a quarter century of enlightened change.

Created in 1991 by then-Transportation Commissioner Earl Blumenauer, the annual class costs the city $8,000 a year and has so far churned out 1,200 graduates of a 10-week evening course that introduces interested residents to the history, theory and victories of Portland transportation.

Several dozen of those graduates met Tuesday night at Ecliptic Brewing for a party hosted by Blumenauer, now a U.S. congressman, to honor the class and its founding instructor Rick Gustafson.

Gustafson, a friend of Blumenauer’s since they were high school classmates in Gresham, rose beside him through city politics and has served in many roles, including as a state legislator and the first elected executive of the Metro regional government.

Now a streetcar consultant, Gustafson continues to teach the course each fall and taps a contact list of prominent Portlanders to steep the class in the Portland story — and also offer advice on how to work the system for change. 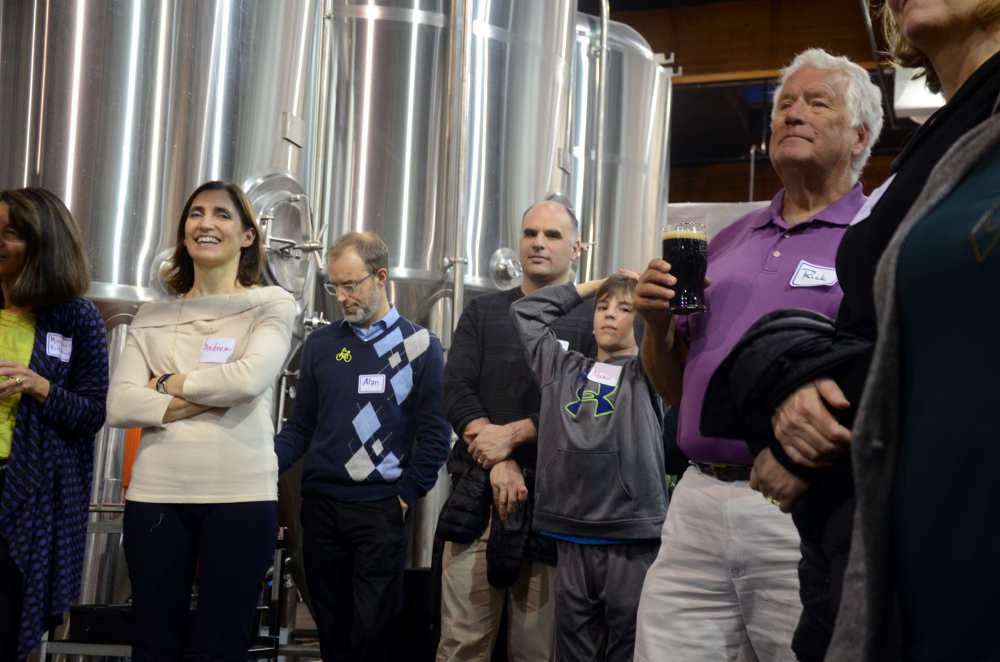 For a final project, people who take the course are invited to deliver a detailed presentation about something they’d like to change in Portland’s transportation system. (And, crucially, city staffers are under standing orders to respond to their questions.) 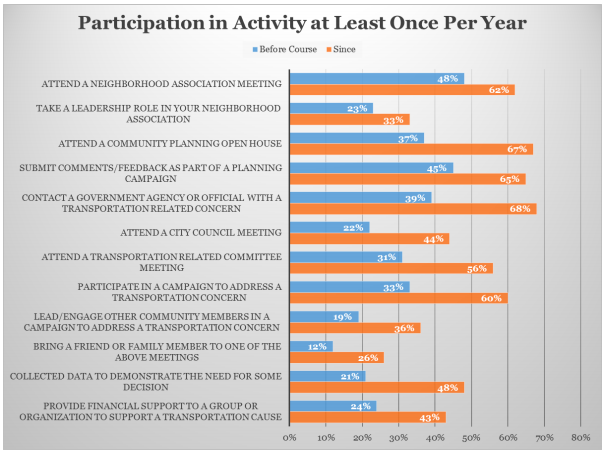 That’s the finding of a 2015 study of the class by Portland State University scholar Nathan McNeil. His research was funded through the Transportation Research and Education Center at PSU.

The findings weren’t all rosy. McNeil’s survey of the class’s alumni — who, I should disclose, include me — clearly show that the course is used mostly by relatively privileged people. Homeowners and higher-income people were overrepresented among alumni who responded to McNeil’s survey; white people and educated people were greatly overrepresented. A grand total of zero alumni surveyed by McNeil identified as black.

In an interview Tuesday, Blumenauer said he created the class basically as a defensive posture after being tapped to run the city’s public works department. He wanted a place to point the people who came to him with complaints.

“About 6.5 minutes after I got the appointment from [then-Mayor] Bud [Clark], people had figured out that I could do something about where a stop sign could go,” Blumenauer said. “It was clear that a lot of what they knew about transportation wasn’t true. So I had been obsessed with an opportunity for anyone to do a deep dive to understand these dynamics.”

In exchange for getting people to promise to take the new course, Blumenauer promised to visit the final class and hear the best ideas of its graduates. That’s a tradition that continues today; the city’s transportation director and commissioner typically send representatives to evaluate final presentations.

Over the last 25 years, dozens of those final projects have doubtless taken some sort of root around the city. You know the covered seating area in front of Mississippi Pizza? That happened because my 2010 classmate Rebecca Hamilton (then an activist, now a planner at Metro) spent months lobbying the restaurant’s owner to create the first of what became the city’s Street Seats program.

“I had high hopes, but it worked out better than I have ever hoped. … The thing I’m as proud of of anything I’ve done is this class.”
— Congressman Earl Blumenauer

Today it’s just one example of the class paying off for the city. Surely readers will know of others.

“I had high hopes, but it worked out better than I have ever hoped,” Blumeneauer said. “The thing I’m as proud of of anything I’ve done is this class.”

Despite the fact that that Congressman talks it up every chance he gets on his travels around the country, he’s not aware of any other city that has replicated it.

That might yet change. Part of McNeil’s project was to create a handbook for other cities that want to imitate the program.

In an email Tuesday, McNeil said he’s “working with TREC on identifying a few other cities to help implement the curriculum and get their own courses off the ground.”

And if you happen to live in Portland, it’s never too early to apply for a free seat in this year’s class.

I thought this was a good class, but was somewhat put off by Rick Gustafson’s frequent cheerleading for streetcars, which, as we all know, don’t mix very well with bicycles.

I’d much rather have a streetcar than a car near me.

But yes, I know what you mean.

I’m bummed that I missed this – never got an invite tho I took the class in 1998. I recall two classmates who have gone on to serve transportation in a professional capacity – Linda Ginenthal and Phil Goff.

I took that class but I never heard about this. I would have gone if I had known!

I think every city council person should be forced to take this class. There can at times be a situation when the general public has higher transportation knowledge than elected leaders.

I also thought the class was excellent. I’m still waiting on my final project to be implemented but I wouldn’t have been able to push it as far as I have so far without the class (I took it in 2014).

I took the class in the early 90’s when I was Transportation chair for NWDA.
My project called for direct transit service between the Rose Quarter TC (then, Coliseum TC) and Swan Island (“10K employees on SI, 10 minutes from MAX and NO direct bus!”). The TriMet 85 began service in ’95! Thanks Earl and Rick.

If PBOT wants to help Transportation in Portland than it should throw its weight around outside of Portland. The level of traffic into and out of Portland everyday would be a lot less if there was a commuter rail or dedicated BRT lane between Salem and Portland.

In my graduating class a woman had worked on getting cross walks and a speed limit reduction on 28th Ave between the I84 overpass and NE Broadway. Residents of the neighborhood adjacent to Fred Meyers had to play Frogger to walk or ride across 28th from their quiet hood to Freddie’s. I’m pleased and proud every time I see the crosswalks that she was successful in no small part due to this class!

It’s great that Earl has done so much for the local traffic scene. So much in fact that a majority of the posts on BP are complaints about the traffic scene in Portland. Dang!

And it’s too bad the nation is for all practical purposes bankrupt as a result of Earl and his colleagues in Washington D.C.. Double dang!

I took this class back in 2002 or so, taught by Mr. Gustafson. Really opened my eyes to how transportation works in Portland, as well as what we needed more (and less) of.

When I was working on my MURP at PSU 1997-2003, I sat in on several of these class sessions, especially when Gordon Price of Vancouver BC was the guest speaker. The MURP program offered a longer 3-credit class that somewhat replicated the one-credit class, but with more theory and less practical applications. It was required for MURPs getting a transportation specialization, but most MURPs took the shorter version you’ve described.