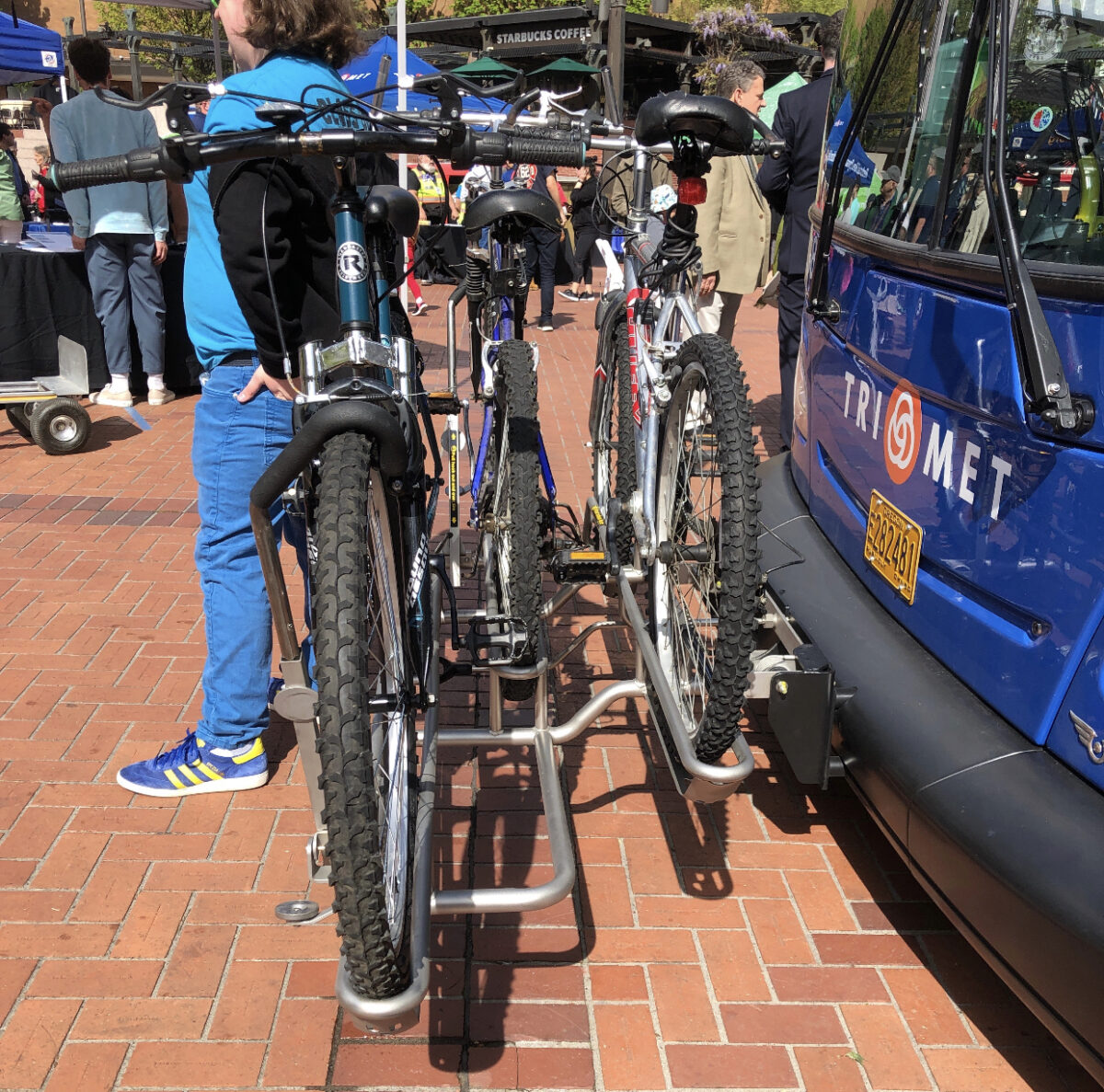 It’s taken 12 years, but TriMet has finally added capacity for three bikes to their buses. Well, some of them at least.

We learned today that the design of the agency’s five new electric buses allows them to use a three-bike front rack. The new rack made its debut an event in Pioneer Square today.

This is a big deal because the existing two-bike racks often fill up and there’s plenty of public demand for more room. And it was way back in 2007 that we first reported TriMet was interested in finding a three-bike rack that would work.

The new rack is the “Trilogy” model made by Sportworks(the same company TriMet uses for other racks). According to them, the rack’s support arm will fit bicycles with wheel sizes from 20 to 29 inches. The trays can support bikes with a wheelbase of up to 44-inches and tires up to 3 inches wide. 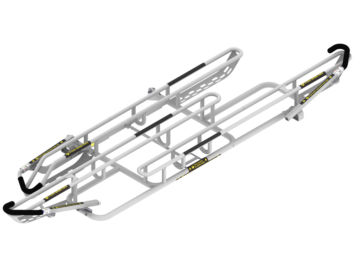 Back then, the agency said the problem was that the added width of a third rack would make the turning radius of buses (a.k.a the “dynamic envelope”) too wide.

Just one of TriMet’s new buses is in operation (on Line 62 in Beaverton). A second one is due to be in service by the end of the month and the remaining three are still en route to Portland. It remains to be seen if the five additional electric buses will work with the new racks.

Hopefully TriMet can figure out how to fit these racks onto more buses in the future.

Hallelujah. I’ve barely fit a bike with long wheelbase and 29×2.3 Big Apple slicks on the old rack by deflating a little. 44 inches is the wheelbase of the Jeff Jones LWB out of Medford.

I’ll be the first to agree that a fifty percent increase is noteworthy, laudable, and appreciated, but changing the rules/doors to allow overflow bikes onto buses under certain conditions (available space on the bus, etc.) would be a nice gesture. Some transit agencies allow this, have rules that permit this.

Now all they must do is make the e-buses run.

Last Friday I traveled to Sunset TC to cop an e-ride–to find an old diesel bus parked under the fancy charging apparatus.

I have another report of an e-bus stalled out on the route–out of juice?

This 3 rack design looks better than some of the earlier styles that I have had problems with as a user…to the point of wishing for the old 2 rack style.

I do understand the capacity issues of the old two rack…I have often had to ride ahead of some buses until the rack opens up in Honolulu…if that bus was the last connection or bridging a bike barrier (mountain range) that I needed a bus to cross with….and knew the rack would empty soon.

We’ve been asking for 3-bike racks for WAY longer than 12 years. Also, let’s not forget that TriMet pays *extra* for the extended nose on the Gillig buses they’ve been purchasing since 2012 (this adds 1′ to the length). The “dynamic envelope” excuse is and always has been total BS.

Here are the added lengths for the Sportworks racks:

Executive summary:
TriMet has been arguing that adding 3.4″ to the front of the bus for a 3rd bike rack is impossible, but they had no problem adding 12″ for the extended Gillig nose.

Nice!
Thanks for the additional information in the comments above, Max.

Every bus in Eugene has had 3 bike racks installed since 2011. It’s about time Trimet got it’s act together on this issue.

I still have yet to see any of these 3-bike racks, did they not move forward with expanding it beyond those 5 buses?