The sixth annual Oregon Triple Crown kicked off in Waldport on Saturday in nothing short of ideal conditions for a day in the saddle.

The occasion was the Oregon Coast Gravel Epic, an adventurous exploration of the Siuslaw National Forest between Yachats and Waldport that followed a web of logging roads, rivers and creeks. It was the first of three events that promoter Mike Ripley has packaged together as a test of endurance and a showcase of Oregon’s bicycling bounty. Later this month is the dirt-lover’s Sasquatch Duro in the mountain biking mecca of Oakridge, followed by the more traditionally styled Oregon Gran Fondo in Cottage Grove on June 2nd.

Ripley is a former restaurant manager who grew up in Eugene and now lives in the small town of Monroe, Oregon (population 617). He started Mudslinger Events in 2003, has been organizing events since 1991, and is widely respected among riders and tourism officials statewide. Ripley’s Mudslinger cross-country mountain bike race has been held just outside Corvallis for 31 years straight. All told he and his crew (many of whom are also his family) put on 14 events a year that deliver miles and smiles for about 4,000 people.

“When I was 11-years-old I timed my friends around the block,” he shared during a chat on Saturday. With a deep love of riding bikes in the dirt and a generous, affable nature, it’s easy to see why Ripley, now 51, has survived in this tough business for so many years.

Surviving a route called “The Abomination” was on the mind of many of the riders who assembled in the parking lot of the Waldport Community Center for the start of the Gravel Epic on Saturday. This event is part race, part non-competitive ride. Some do it to get a good time, others do it to have a good time.

It was my first time on the route. After hearing about this event for years I finally committed to doing it. I even convinced my brother from southern California to come up and join me. A few clicks and conversations later, and it turned into an excellent excuse to spend the weekend on the coast with the entire family.

In keeping with the appeal of gravel riding — an increasingly popular mix between the carfree fun of mountain biking, the speed and efficiency of road riding, and the adventure of randonneuring — the Gravel Epic drew all types of people and bikes. Ages ranged from 22 to 78. Tire sizes ranged from 28c to 4.8-inches.

Eugene custom bike builder Rob English (English Cycles) had no problem with any of it. He recorded the fastest time of the day atop a pink, 17-pound bike with slick 35c tires.

While the tools and the engines varied dramatically, the ride itself offered the same challenges: The longer “Abomination” course of 61 miles and 6,700 feet of elevation gain featured four significant climbs and four devilish descents. The shorter “Son of Abomination” course was about half that length and elevation and had about half the participants. The terrain varied widely — from double-track to loose rocks to smooth pavement — none of which was a problem for English as he torched the course in just over three hours, 22 minutes.

No matter how fast you rode them, every single mile was jaw-dropping-quintessentially-Oregon beautiful. In years past this ride was a bit too “epic” due to rainy weather and lots of mud (this ride recap from Portlander Mielle Blomberg after last year’s event will give you an idea). But Saturday was perfect. Temperatures ranged from 60 to 70 degrees and the roads were in great shape. Conditions were so good, the only thing we had to worry about was over-shooting corners due to irrational exuberance on the fast and furious descents. 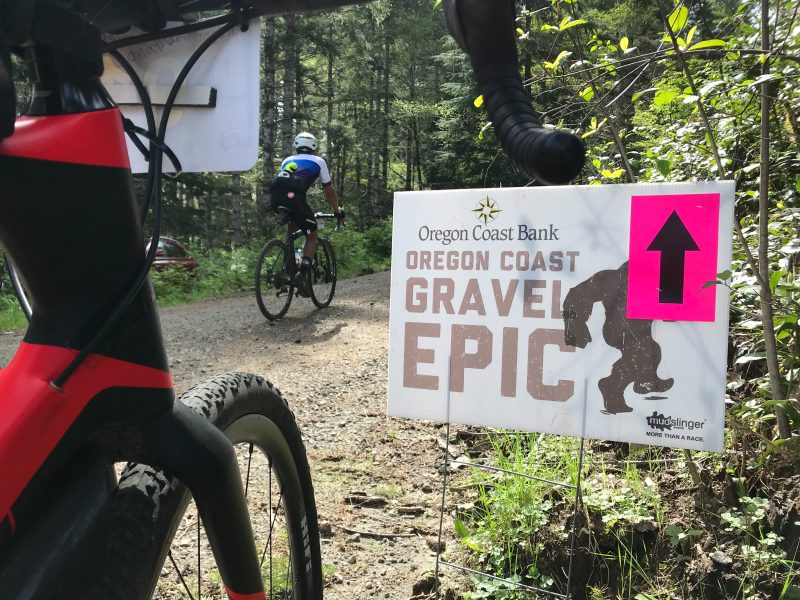 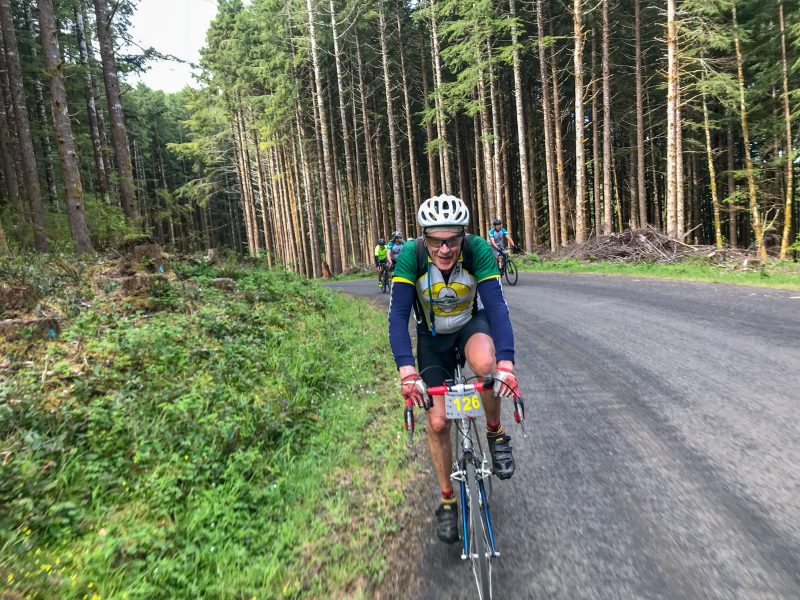 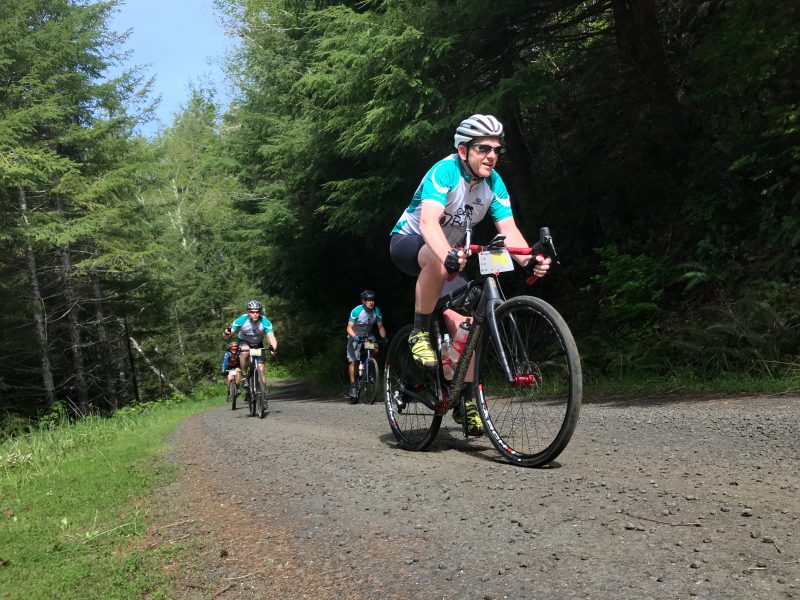 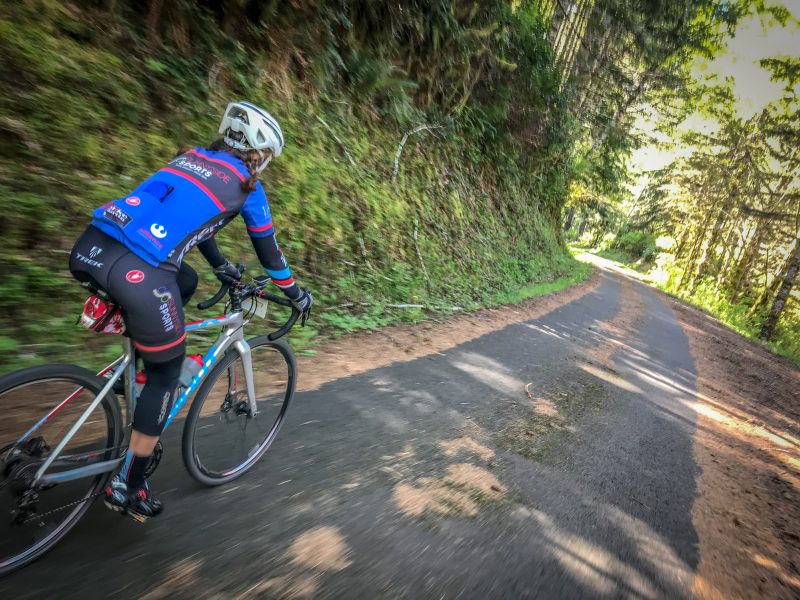 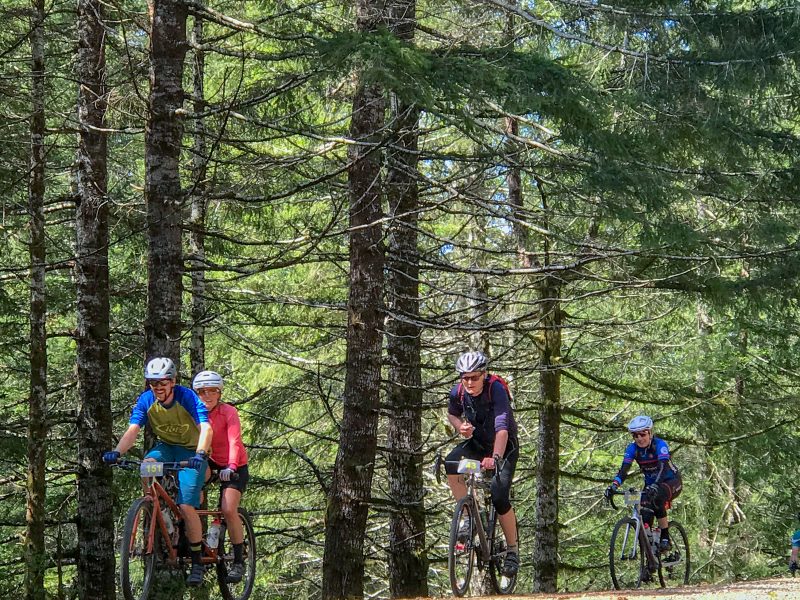 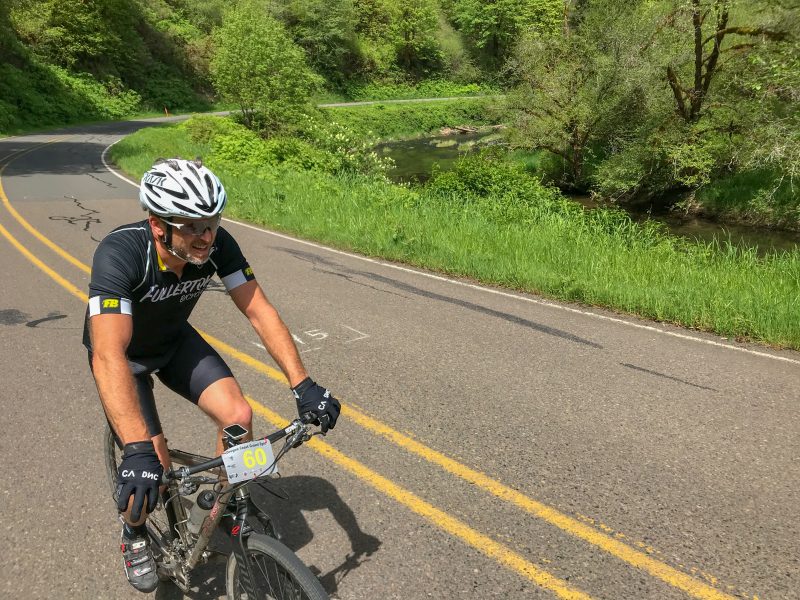 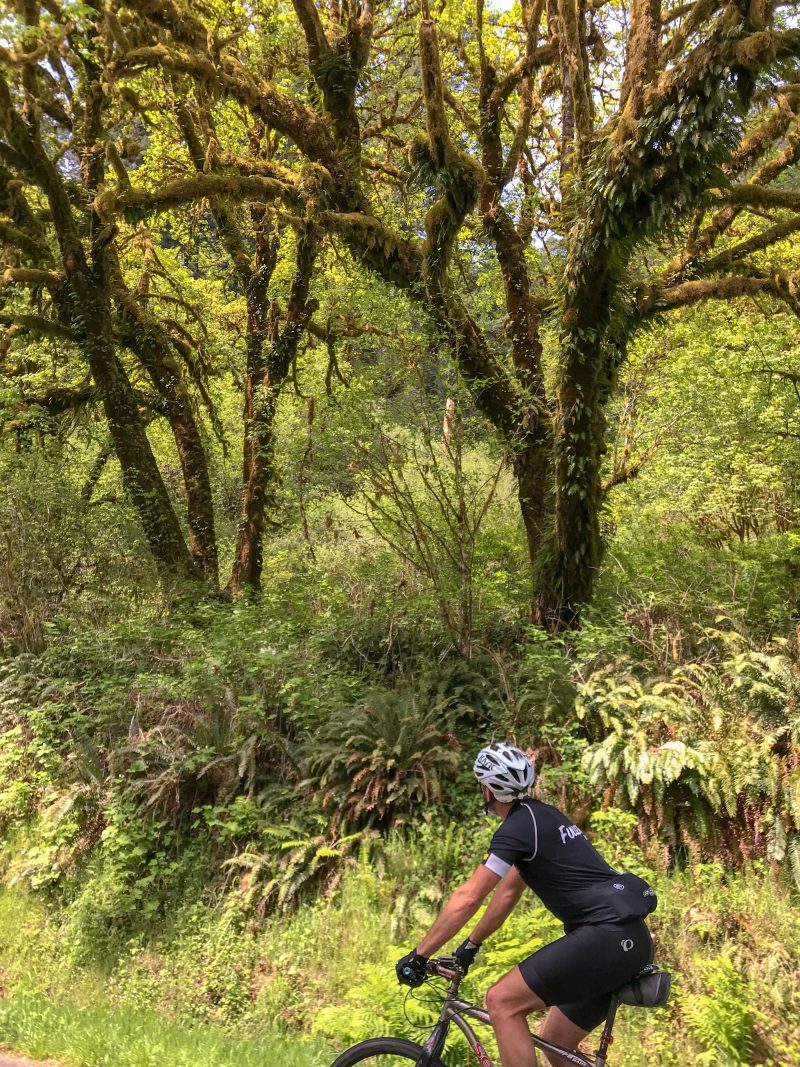 Oh and then there was that headwind on the final push northbound on Highway 101. That was a killer.

It was indeed an epic day, in more ways than one.

For Ripley, it’s all about getting people outside. “We have to allow people to unplug and get out of their silos,” he said, as he congratulated riders over the finish line. “That’s what this is all about. That’s why events are important. That’s my motivation. If somebody has a smile on their face at the end of the day. It’s all worth it to me.”

Oh shoot – I talked to you and didn’t realize it was you! Hi from Team AF. Thanks for the photo! 🙂

It was a very fun event and route. I had not done any riding in the area before this and I can now say it was well worth a trip from Portland. It was a great mix of gravel roads, single lane paved roads that don’t look like they get much of any vehicle traffic, and a few 2 lane paved roads. Bring your climbing gears if you do it. The weather was perfect. The road conditions were great – only a couple of mud holes and pretty much no dust.

Great ride and perfect weather! Managed to get within a quarter mile of the finish before flatting 🙂

I can relate Jeff. My brother flatted (his tubeless wheel no less) right at the start of the final descent!

maybe someday, they will be able to ride the nehalem river and salmonberry river – if a rails to trails conversion happens – that would be reall super scenic and cool