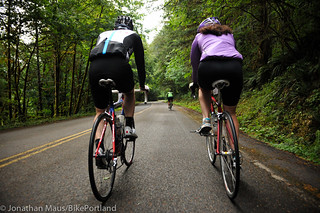 Oakridge might be one of the premiere mountain biking destinations in the country; but did you know that there’s also lots of fun to be had on a road bike in that neck of the woods?

On Saturday, I joined about 100 other lucky riders for the first-ever Tour of Aufderheide, an event that took full advantage of one of the most spectacular roads in Oregon – Aufderheide Forest Drive.

Tour of Auderheide is the work of Eugene-based event promoter and owner of dark30 Sports, Steve Cash. After 30 years in the U.S. Marine Corps, Cash’s new focus is on using bicycle events to give an economic energy boost to small Oregon towns. “This is about economic development in these small towns,” he shared with me after Saturday’s ride which started and ended at the quaint Westfir Lodge, “They have great attributes for cycling and a lot of potential to bring cyclists in.” 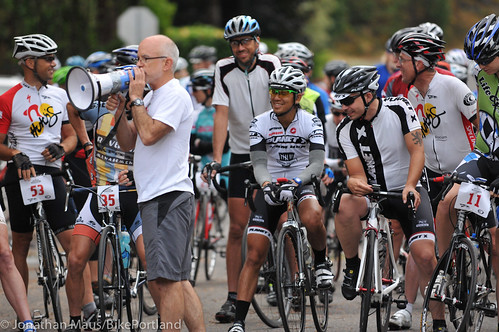 Steve Cash in action before the action. 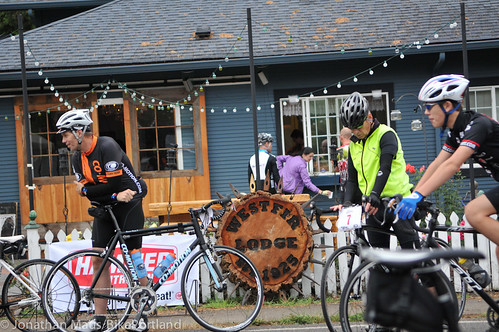 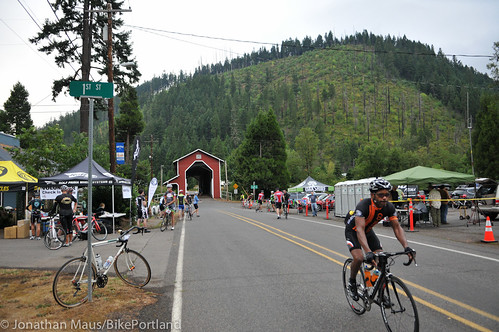 The usually sleepy town of Westfir came to life.

Westfir (population 253) is just a few miles outside of Oakridge, and while many readers of this site might know it simply as the gateway to the Alpine Trail (a very popular mountain bike route), it’s also the southernmost point on the West Cascades National Scenic Byway. While byways (not be be confused with scenic bikeways) were created for driving on, this one happens to be spectacular for cycling. The Aufderheide Forest Drive portion of the route (named after former US Forest Service Supervisor Robert Aufderheide) is especially memorable.

On Saturday, we rode about 48 miles north on the byway, then turned around and headed back to Westfir. Our route followed the North Fork of the Willamette River, under a canopy of trees and timber the entire time. There’s a fair bit of climbing (5,800 feet elevation for our 96-mile route), but if you ever overheat, you can take your pick of perfect swimming holes bubbling mere feet from the road.

A mix of riders showed up to tackle the 10, 40, 64, or 100-mile route options. Portlander Brian Zeck showed up on his tandem with his 10-year-old daughter Sam on the back. Jeff Althouse, the owner of Oakshire Brewing in Eugene, put in his miles and then made it back to the lodge to serve the free beer each rider got at the finish (thanks Jeff!). Some riders were doing the event for placings (and glory), while those of us toward the back were just soaking in the scenery and forest solitude.

Speaking of scenery, check out a few more shots from the ride… 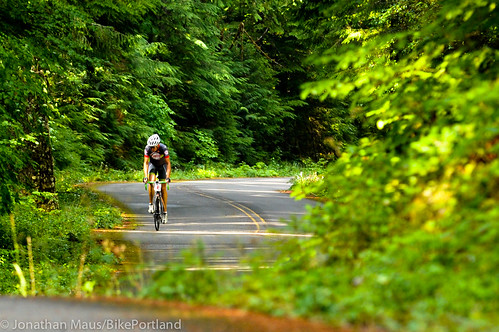 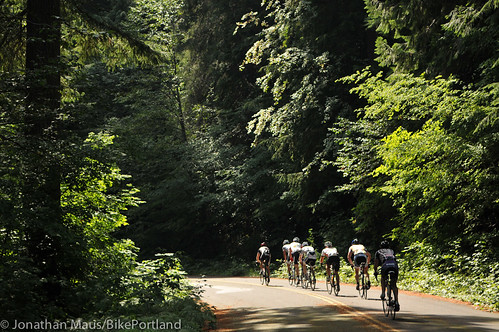 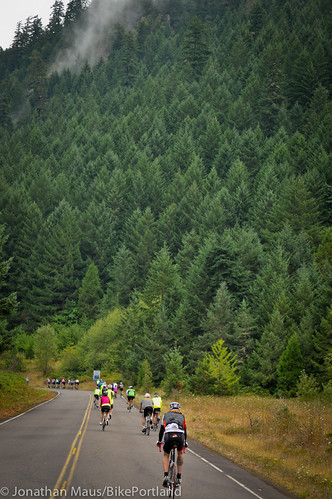 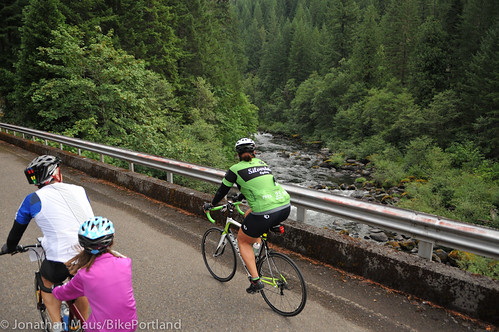 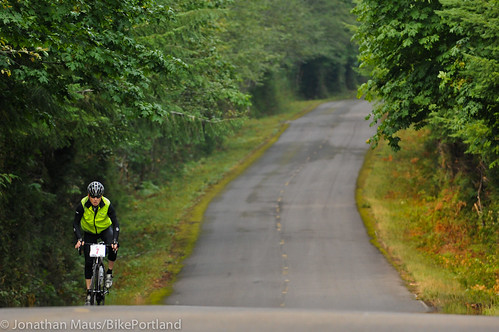 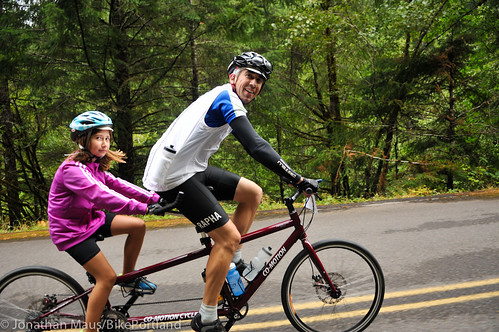 Brian and Sam on the tandem. 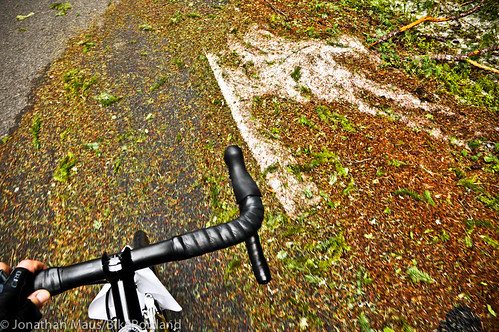 Leftovers of a torrential thunderstorm that hit the night before. That white stuff is hail. 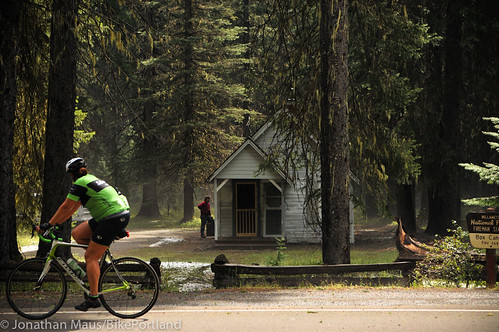 Up in the forest, near the Robert Aufderheide memorial plaque. 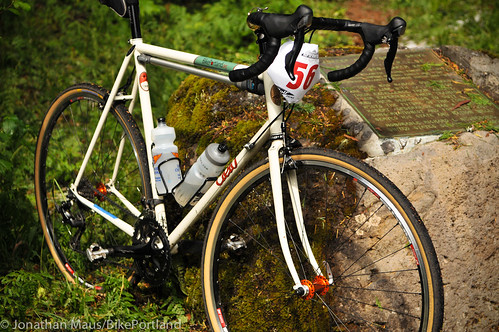 Couldn’t resist this blatant promotional shot of my new Cielo. 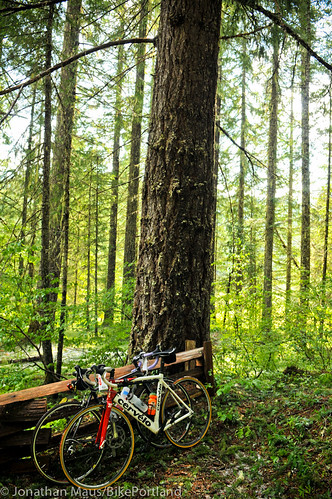 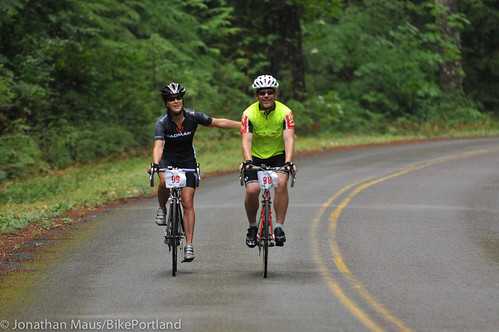 Jeff of Oakshire Brewing and his friend Caitlin.

Rumor has it that the route we rode Saturday will be a future State Scenic Bikeway, which would solidify its place as one of Oregon’s best roads to ride on. But don’t wait for an official decree. Next time you roll through Oakridge, pack your road bike, stop in at the Westfir Lodge for a meal and some hospitality, and then enjoy this excellent ride.

——
Special thanks to our esteemed advertiser Western Bike Works (NW 17th & Lovejoy) for their support of this ride (and more, stay tuned!). If you haven’t yet, be sure to check out their monthly shop rides. Everyone’s welcome. See their event calendar for details.

We agree about the beauty of this route. We just did a self-supported tour north to Portland through there a couple of weeks ago. There IS that rather steep bit in Box Canyon where we climbed 100′ vertical and rested, repeat 8 or 10 times (110# of bike and gear). You got rather cooler weather! Also, that is a very attractive covered bridge.

We rode an organized over-and-back ride on the Aufderheide a couple of years ago–absolutely BITCHEN road! This should be a destination ride for any roadie or tourist in the region.

Nice seeing you out there, Jonathan. And yes, I was drooling over your Cielo. Very cool bike indeed!

We rode the Aufderheide as part of our family bike tour from Portland to Klamath Falls last year. Of all 550 miles, the Aufderheide was one of the most memorable segments. In fact, we liked it so much that I named the Breadwinner Cycles touring bike the Aufderheide. http://breadwinnercycles.com/products/aufderheide

We rode from McKenzie Bridge to Oakridge in two days, camping at the beautiful Frisell Crossing campground. Spectacular!

If you like hill climbs, backroads with no traffic and camping out, a great nearly car-free adventure is to Amtrak it to Eugene with your bike, then hop the Diamond Express http://www.ltd.org/diamondex/schedule.html to Oakridge. From there you can ride the whole Aufderheide, then follow McKenzie Hwy/126 north to Hwy 20, then east a bit to Hwy 22 and down to Detroit Lake. From there you can pedal up and over Breitenbush Rd/NF46 and down into the Clackamas River, then back to Portland. For a bit longer and more grueling trip, take the road up to Timothy Lake cutoff and go all the way to Hwy 26, then east on Hwy 26 just a few miles to a connector road that will take you over to NF-48/White River Rd and a grueling climb up to Hwy 35, then down Hwy 35 to Hood River. That way you avoid the traffic on Hwy 26. I did this a few years back over 3 days and it kicked my butt…but it was so beautiful I would recommend it. You could come back to Portland via Lolo Pass or the Gorge. I was so wiped, I got a pick up in Hood River, so it wasn’t quite car free. Almost. I call it the Tour de los Volcanoes…

Fall is a great time to do a long ride on the Aufderheide, early October when the maples are turning color. The old growth Doug Firs along the road are spectacular, take the few minutes and walk into the Congressional Grove to see some massive trees. Love this ride, I do it as often as I can.