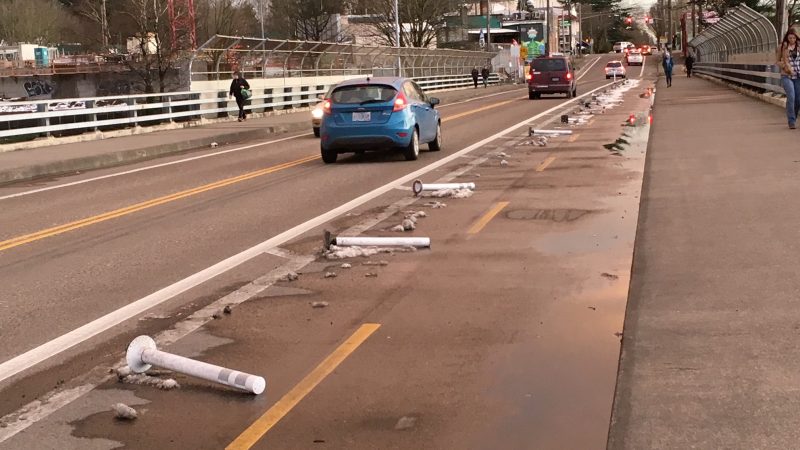 This photo was taken by reader Tanja Olson on Thursday, February 23rd.

Portland is still getting used to snowy winters — so too are the City’s snowplow operators.


On Thursday, a Portland Bureau of Transportation employee set the scooper on their plow a bit too wide and uprooted 30 plastic bollards that demarcate the bike lanes on the 28th Avenue overpass of I-84. The bollards were installed last summer and are part of the Twenties Bikeway route. 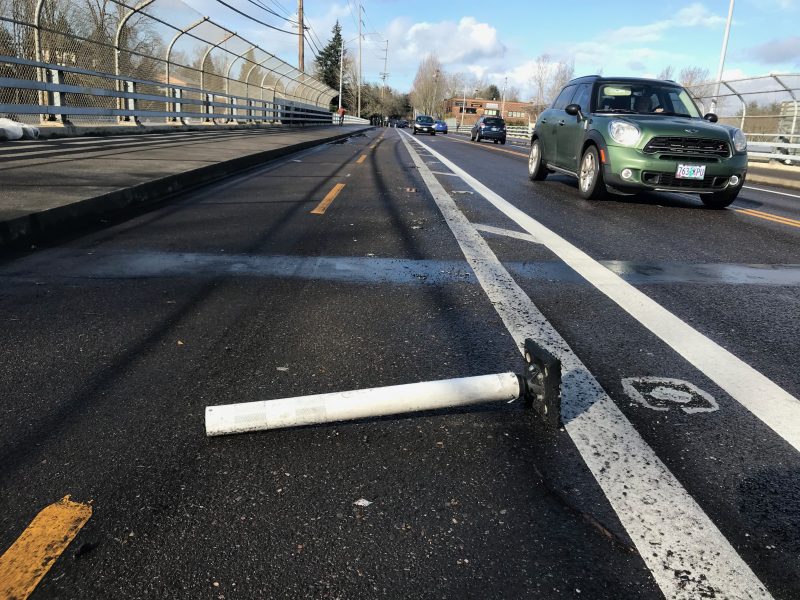 By Saturday only one bollard remained.
(Photos by J. Maus/BikePortland) 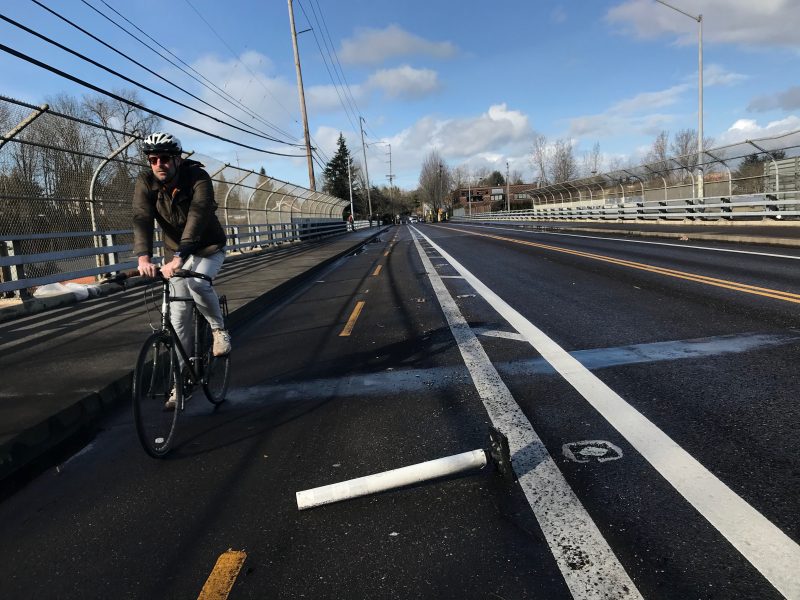 With a bike rider for context. 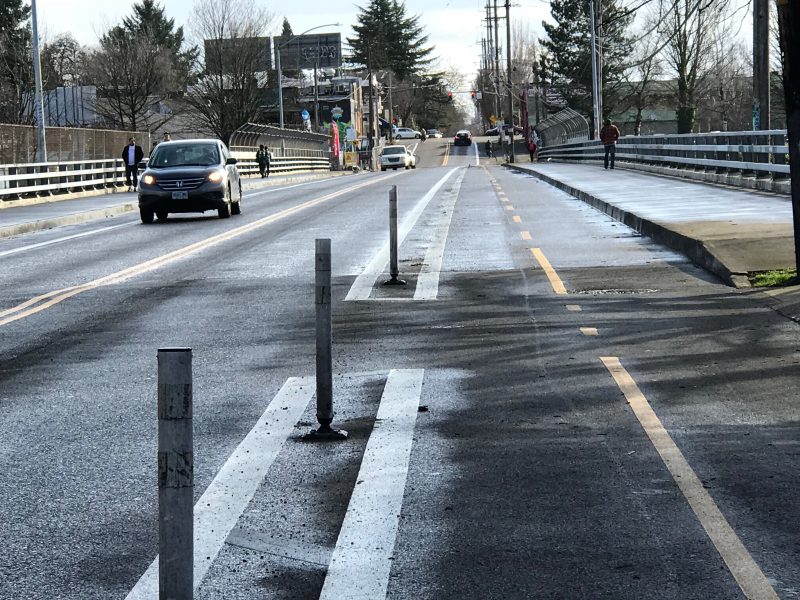 Here’s a view from further away. Note how the destruction began right at the bridge deck. 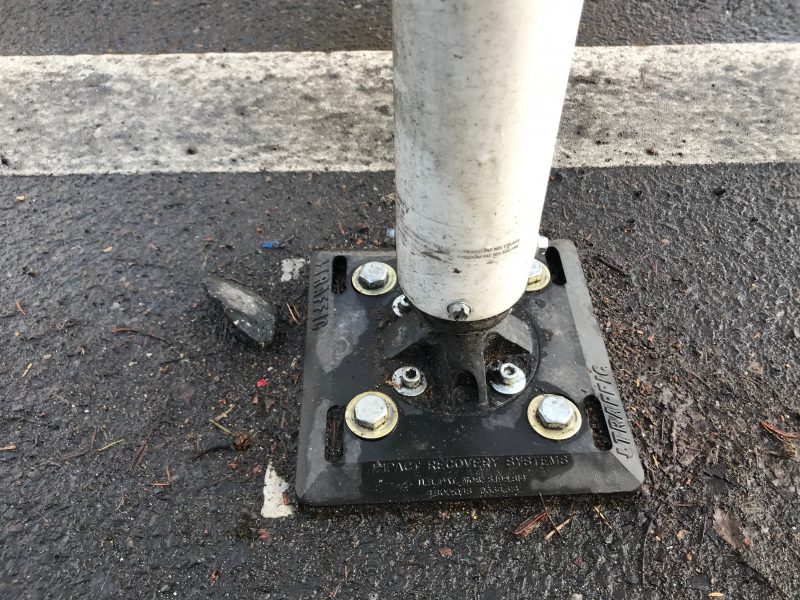 It’s not as though these things are just glued to the ground willy-nilly.

Reader Tanja Olson shared that lead image above with us on Friday. Before confirming the snowplow assault with PBOT today, we weren’t sure exactly what uprooted all the bollards. So we had a bit of fun with our friends on Instagram and asked them for their ideas:

terry.d.m.bikes: I’m from Wisconsin originally, I know what it looks like. I’m sure the plow did it.

carmusmeathole: they were all laying down perfectly. i work around the corner. i figured a plow would have heard and swerved out of the way?

All kidding aside, PBOT Public Information Officer Dylan Rivera told us today that it was indeed a snowplow operator. The incident was reported by the plow crew on Thursday and PBOT has already replaced 24 of the 30 bollards. They plan to install the final six tomorrow. “In the meantime,” Rivera added, “we took the opportunity to sweep the bike lane.”

Rivera also wanted to pass along this tip: “Whenever anyone sees damaged infrastructure on our streets or public right-of-way, the best thing to do is call our 24 hour dispatch hotline 503-823-1700, or use the PDXReporter.org web site.”

Now add to this the annual discussion of when all the gravel PBOT used during the recent storms, and has now been deposited in bike lanes all over town, will be cleaned up?

Why do you hate gravel bikes?

riding the gravel bike lane – you have to keep your lips closed when you smile. don’t take a flying pebble on the tooth from a speeding car/truck.

It’ll be a good 2-3 months minimum given that the sweepers can only go 4 MPH (they really need to invest in more street sweepers, or use less gravel). This would be easier to deal with if it weren’t for all of the non-gravel debris that is also littering the bike lanes.

They can’t come soon enough. I got a flat after my ride over the Sellwood bridge yesterday. The bike lane there was a mess. I found a pointed stone that was the culprit.

At least you didn’t slip on the ice!

Yup. This is an issue every year. For months we cyclists are riding on gravel in the bike lanes. In my experience it lasts well into June or so. Unacceptable from a safety standpoint.

In my experience, it takes about 6-8 weeks after the snow melts. At least they didn’t have time to hit all the major bike routes.

Look at it this way, the streets get an unscheduled sweeping.

It’s pretty pitiful when sweeping of the bike lane is only done when the bollards are unintentionally removed. It’s apparent that PBOT has not actually planned for the maintenance associated with protected bike lanes.

Yes, they are generally at a loss of how to accomplish bike lane cleaning in a cost-effective manner.
They have one? maybe two? specialized sweepers that are small enough for most bike lanes, but cost $200K+ EACH.
I offered to design a bike lane sweeper that would be pulled by an eTrike. Two PBOT personnel came to our shop and reviewed the idea. Ultimately, they rejected it because we would not have the vacuums and everything associated with picking all the detritus up. Clearing a path down the middle was considered to be too much liability as detritus would be left on the sides. I really don’t understand how that is better than leaving detritus everywhere and unavoidable to riders – seems there is a lot of liability asis.
I have decided to continue on this project within Truck Trike. I’ll keep everyone posted on our progress. If we are successful, we will need a sponsor to run a few eTrikes with sweepers around town [they will get some seriously good advertising on the vehicle].

+1 for Jersey barriers – very comfortable where I’ve seen them in NYC.

Confidential to PBOT… You’re trying too hard. The snow will melt on its own. Just let it go.

I should also add that if those bollards got knocked down, they were plowing the street into the bike lane.

This is one of the inevitable results of protected bike lanes; they will not get plowed and/or swept as often.

It is not inevitable. Snow plows can fit in 8′ wide bike lanes. If protected bike lanes were wider, they can all be plowed without damaging the physical barriers. DC and Minneapolis have put effort in plowing multiple protected and buffered bike routes in the winter. And bike lanes in European cities where snow is common get plowed in the winter regularly. It comes down to priority and intentionality. We keep telling ourselves that our bike lanes can only be this wide because we can’t impede automobility.

Speaking of bollards: I noticed that TriMet has installed plastic bollards to PROTECT THE MAX at the intersection of SE Holgate and SE 17th Ave. These are on top of the concrete barrier and large painted buffer between the tracks and the car travel lanes. I can’t help but be struck at the difference we give to protect a large train (after one car v. train incident at that intersection) as opposed to the cyclists all leveraging this one piece of roadway. Yup, I’m feeling touchy since some paint failed to protect me from nearly being sideswiped by a vehicle Saturday while I was in the bike lane and they were making a weird illegal maneuver around a stalled car.

funny you mention this Carrie. I think about this a lot…. That is, the extreme lengths agencies like TriMet and ODOT and even PBOT go to protect trains and cars from hitting each other (and other objects), compared the relatively minor (paint and plastic sticks) to protect bicycle users from everything.

This is one more reason I’m not fond of bollard-protected bike lanes.
They get filled with debris, don’t actually prevent vehicles from driving over them, but they DO prevent people on bikes from taking the car lane to avoid hazards or pass other cyclists with enough space.
It’s safety theater.

Bike lanes need to either be sweepable parts of the road or fully removed, jersey barrier’d paths that actively keep out cars and road debris thrown off by cars.

I see bollards as a first, cheap step towards the end goal you are describing. If it works, then make it permanent with a curb or jersey barriers! Those results hopefully will speak for themselves. If it doesn’t, well those bollards just need a few minutes of attention from an over zealous snow plow to remove.

So Rivera all but admitted that they have no way to sweep a protected bike lane? As far as those specialized narrow sweepers that we have heard about, I don’t think they are actually ever in use, if not completely abandoned by PBOT. City immediately needs to get an effective maintenance plan for this new bollard bike lane system they seem to be fond of at the moment.

What is the point of the gravel? They put it down and within minutes it is all pushed out to the sides serving no purpose and causing all sorts of issues for months, even years, for cyclists using the bike lane. What a damaging waste this practice is.

The practice of putting gravel down on streets in Portland (especially those with any bike lane or cycle-frequented shoulder) needs to STOP.

I’m relieved this was the work of a snow plow and not an intentional motorist as I had assumed. Is this a good place to ask about enforcement for parked cars in the bike lane? I take this route to work daily and frequently see cars parked on 28th on both the north and south sides of Sandy. I know it used to be parking but the bike lanes are highly visible. Could we get some no parking signs to reiterate please?