[*Note, 2/15 at 9:45 am: For some reason this post is not displaying comments or our sidebar. Trying to figure it out. I’ve posted a duplicate here. Sorry. – Jonathan]

By 2020 Portland will have two more carfree bridges — both of which will span across freeways that currently present onerous barriers to our central city transportation network.


At the monthly Portland Bicycle Advisory Committee meeeting last night, Bureau of Transportation project managers shared the latest updates on the Flanders Crossing and Sullivan’s Crossing bridges. Both bridges are at the very early stages of design (about 10 percent), but they have similar schedules. PBOT’s Dan Layden even joked last night that during construction they might even close both the I-84 and 405 freeways at the same time.

The big decisions at this stage in the game are what the bridges will look like. PBOT staff wants to narrow down the cross-section and striping plans and they showed their latest thinking on both fronts to the committee last night.

Flanders is a bridge with vast potential that will be complemented by the NW Flanders neighborhood greenway creating a low-stress street for biking between Waterfront Park and NW 24th. It will also come with new signals at NW 14th and 16th (we hear ODOT is giving PBOT the business about how a new signal at 16th will disrupt freeway-related traffic). The budget is $6.4 million, split between an ODOT Connect Oregon grant and PBOT system development charges.

At 24-feet, the bridge will be the widest carfree facility in Portland. The Waterfront Park path is just 16 feet (including those annoying ship “cleats”) and the Tillikum crossing path is 14-feet wide. To make biking, walking, and rolling as easy and comfortable as possible, PBOT is eyeing one of two options that, “Range from less flexible space with more separation to more flexible space with less separation.” 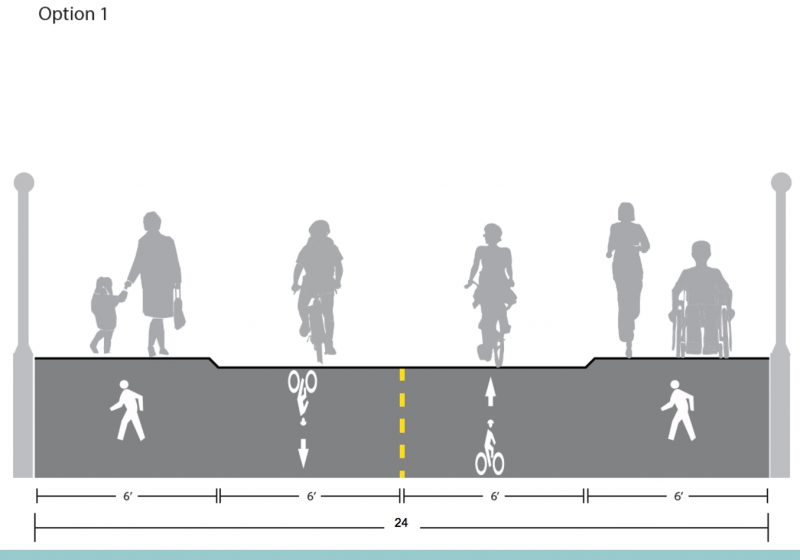 The second option is to put all four lanes on the same level and separate the bikeway with the color green (and other striping). This is the option currently preferred by PBOT: 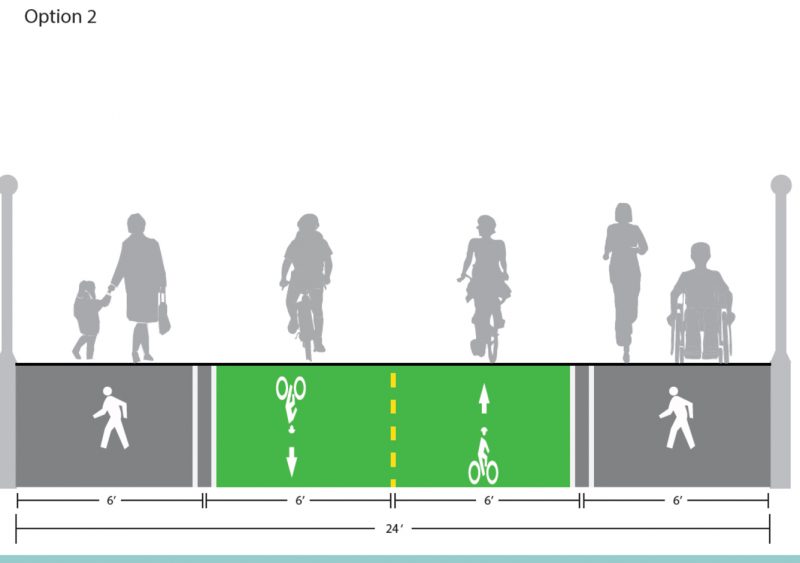 A third option is similar to option two but without the coloring and with even less striping. The minimal striping would aim to encourage a shared space: 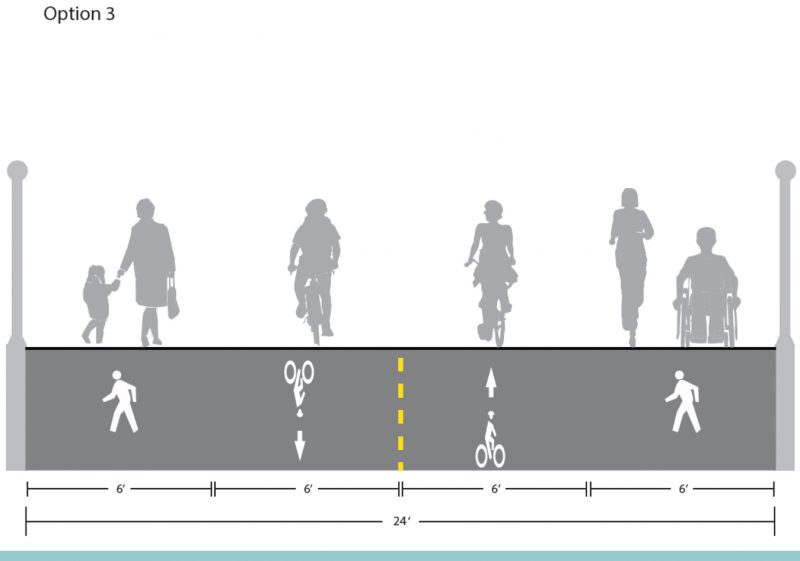 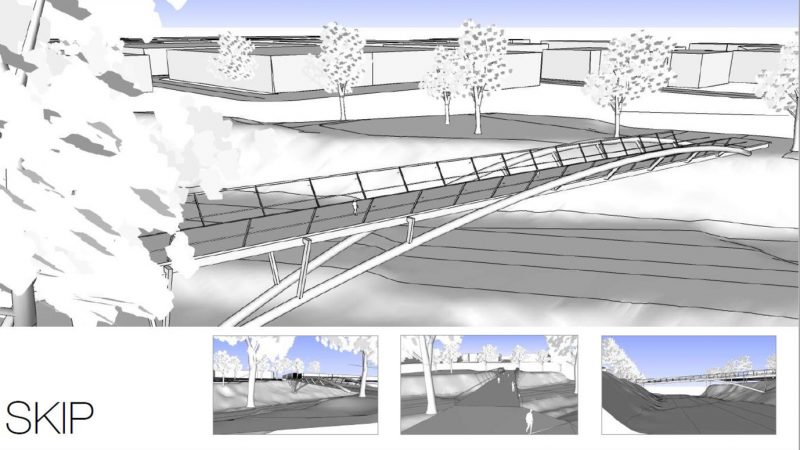 Introducing, Skip! That’s the name of the bridge design PBOT wants to build. This design has won out (the “Leap” design came a close second) because, as Layden put it, “It’s more elegant, easier to build, and it’s cheaper and within our budget.” Speaking of budget, this bridge is much longer than Flanders (460-feet compared to 199-feet) and has a price tag of $13.5 million (paid for mostly by PBOT system development charges).

Since PBOT expects people to take in the view of the downtown skyline from this bridge (unlike Flanders, which they assume everyone will be eager to get across), their current preferred cross-section design puts a 12-foot walkway on the west side of the bridge and a 12-foot, bi-directional bikeway on the other side: 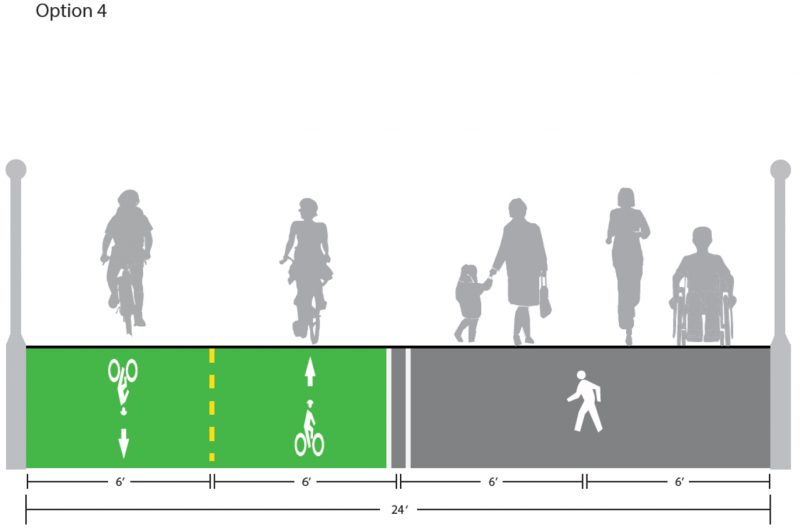 The design of the intersections on both sides of the new bridge also came up last night. Layden said they’ve opted against a roundabout for the north landing in large part because “the geometry for trucks just doesn’t work.” Instead, it will be a signalized crossing. Here’s the latest sketch of what it will look like (note that the project is likely to come with major changes to Lloyd Avenue including a lane reconfiguration and a new two-way bike path on the south side): 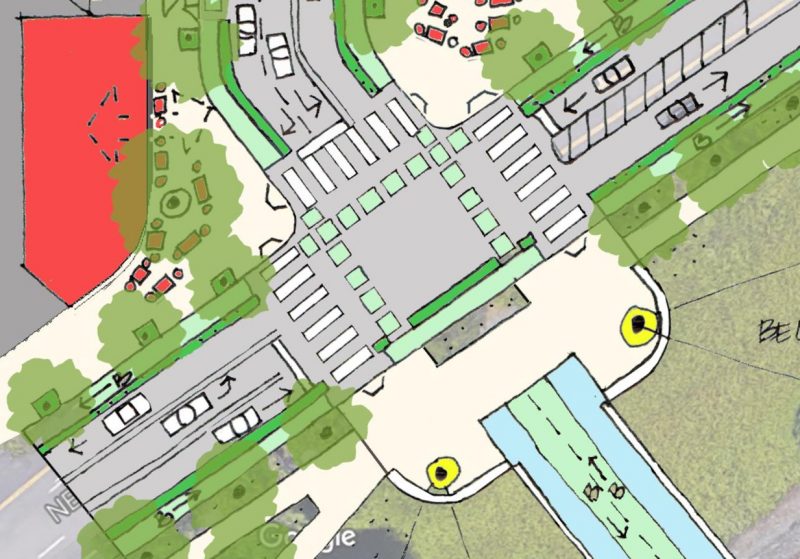 And here’s a sketch of what PBOT is considering for the southern entrance: 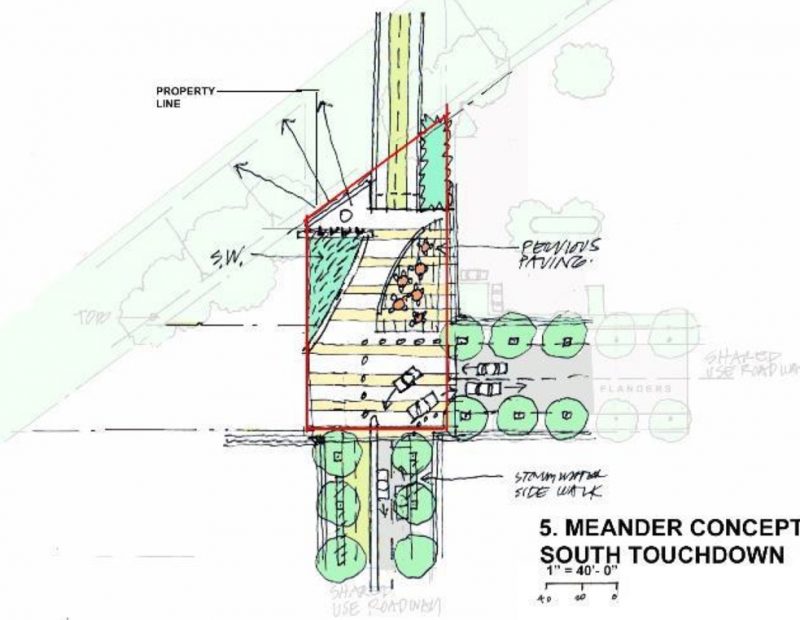 Unfortunately the meeting ran late and there wasn’t much time for committee discussion. The one person who did sneak in feedback was new BAC member (representing Bike Loud PDX) Catie Gould. She said six feet was much too snug for a bikeway — especially if we want to encourage people to ride side-by-side and reach our cycling trip goal of 25 percent.

If you’ve got feedback on these designs, visit the official project pages — here for Flanders, here for Sullivan’s — and contact Dan Layden directly. You can also sign up for emails about each project and of course stayed to your local BP stations for key updates and opportunities to weigh in.

These will be wonderful linkages for an area that can be difficult to traverse.

For the northern bridgehead intersection: should not the design account for the propensity of peds to cluster in the NB crosswalk closest to the MV lane, they will likely wait in the EB bike lane and create a conflict? [How about creating a small ped waiting island by flaring the EB thru bikeway into the plaza…creating a two stage ped [and bike] crossing…like a roundabout has?

Once again, transportation options that are becoming completely muddled by the idea of turning a transport connection into a linear park. They should design this to allow for the most efficient passage of the most number of people at one time, and attempts to keep the cycles separated from the tourists and sight-seers as much as possible would be advised. Especially at the landings – this is the most important area to keep free-flowing transitions to the adjacent paths, walks, roadways, and bikeways.

This is, after all, directly above a 6 lane freeway – although it might have nice views, it will always be over a noisy and smelly freeway and rail tracks. And the views may not be permanent – in a few years, these views might all be shadowed over by new development.

No to linear parks masquerading as transportation. This is not the next high-line.
Yes to free-flowing cycle paths that are not overly corrupted by extraneous hard scaping, signs, curves, and conflicts with peds.

I will be impressed if they do not put in a chain-link fence cage around the whole thing, but seems like they will need this to be installed along the whole stretch over the freeway and train tracks once the lawyers, railroad lobbyists, and ODOT minders get a hold of the final design – hopefully not.

eawriste
Reply to  Bald One

You are correct about new development. There will are two buildings planned that will obstruct the Westward view from this bridge: a 15 story building at 203 NE Grand and a 14 story building at 320 NE Lloyd Blvd.

maccoinnich
Reply to  Bald One

I’m confused by this comment…. in neither project is PBOT is building a linear park over the freeway. These are pretty basic utilitarian bridges.

The flanders bridge design looks fine, but I’m much more interested in the idea of how they’re going to get across the 16th avenue “weave lane” mess. No details on that yet

I really want this to happen.

Sure, but the bridge engineers would definitely need to t-shirt canon proof the thing.

At the meeting last night the feeling I had was a disappointment that there was only 24 feet to work with in each of these bridge designs. Each span has its own challenges as you want to keep everyone “in their lane” on Flanders because we know how detrimental created conflict can be but on the Sullivan’s Crossing (Skip) span the grade is a bigger concern and cyclists going downhill will have significantly more speed than most other users of the bridge.

Barring any unforeseen infusions of cash that could solve these problems by allowing a wider span this should be watched closely to see if six feet for each type of user in each direction is really enough or if we need to be advocating that much more for wider spans as the default option.

Also, 24 feet seems awful stingy for a brand new bridge. Would making it 28 or 32 ft really cost that much more?

I would rather see a flat grade with the ability to add occasional candlesticks to create a divider, than the sloping curb. Candlesticks can be moved if it turns out that too much space was given to one mode or the other, and don’t hurt much if you bonk into them. That curb makes me a little nervous; it’s not a huge safety risk, but I can see a jogger trying to bypass a slow-walking group slip and sprain an ankle on that.

The Sullivans Crossing is so long and has so much grade that passing will be a significant issue for people on bikes. I think the shared, 2-way path bike portion should be 14′ wide. Peds will be more spread out, and a 10′ wide path with no cyclsits on it should be very comfortable. I agree that, although this bridge will have nice views, they will all be through protective fencing, and will be offset by the extremely loud and smelly experience of crossing a freeway. Very few people will want to linger here. The bridgeheads, howver, do deserve some planning to create places for people to linger, meet-up and allow people walking and biking to get through with minimal conflict.

I’d be interested in knowing the prices of the options for Flanders bridge. Any chance money we would save by having even pavement could be spent on other improvements?

Mini-roundabouts are less common in North America, but frequently used in the UK. Their footprint is smaller, making them suitable for retrofit situations with right of way constraints (and lower cost). They are also commonly used where truck U-turns are not needed, so achieve all the safety benefits of compact modern roundabouts at a much lower cost. They are all truck apron, and in the UK are sometimes just paint on the road. Mini-roundabouts examples: