Ruckus Composites has come a long way since we first visited their shop seven years ago.

Back then company founder Shawn Small worked in a rough shop space in the Brooklyn neighborhood that he shared with another company (Portland Design Works, which has grown quite a bit itself since those days). A mechanical engineering grad who’s now 32 years old, he worked alone with just his tools, machines, and big ideas to keep him going. Part bike lover, part mad scientist (he used to write our “Bike Science” column), and part entrepreneur, Small has definitely managed to keep going.

As he approaches a decade in business he announced two new hires today which brings the Ruckus staff up to six full-timers (not including himself).

While he envisioned a company that would make a full suite of bicycle components — and maybe even a line of bicycle frames — Small has zeroed in on one niche: carbon fiber bicycle frame repair. Since finding that focus around 2012, Small has invested in training and tools to make his operation as efficient as possible. Many of the 60-70 bikes that come through the shop each month are fixed and returned to their owners within 1-2 weeks. That’s possible in part because of things like the shop’s graphic design prowess and vinyl plotter that allows them to create and print frame stickers and graphics themselves.

Another competitive advantage is their ability to 3d-print replacement parts like derailleur hangers. It’s a complicated process; but with a lack of standardization in the bicycle industry, it’s a must. “We’re the only shop in the world that does that,” Small said during our visit to Ruckus’ central eastside industrial shop space last summer. On that note, Ruckus has also grown because of a lack of competition. The company finds customers through traditional marketing and has also become the go-to source of repairs for many carbon bike manufacturers and large bike shops. When a carbon frame cracks under warranty, it’s usually much cheaper to have it repaired than to scrap it and send out a new frame. 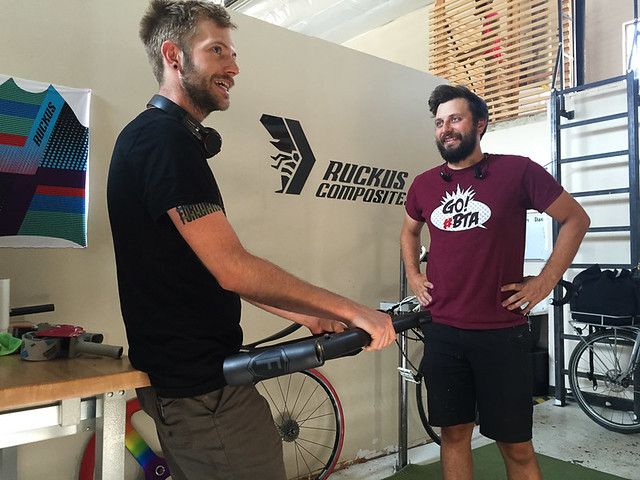 Shawn Small and employee Graham Adams at Ruckus HQ in 2015.
(All photos below by J. Maus/BikePortland) 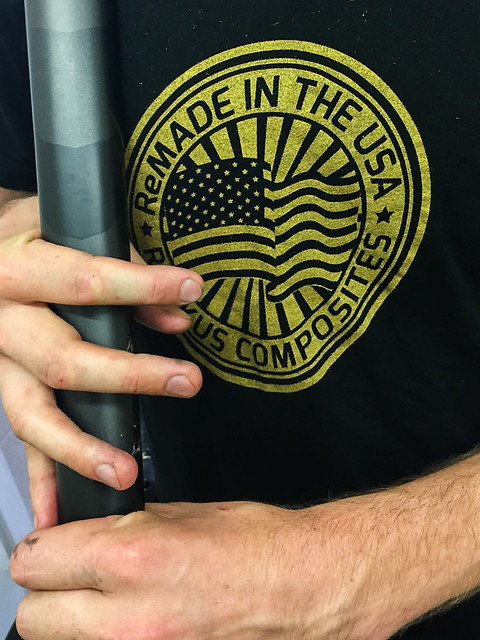 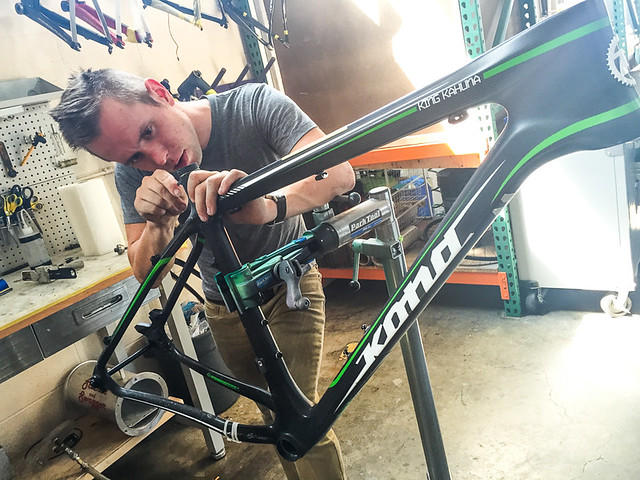 Each bike is given a thorough inspection to find damage. 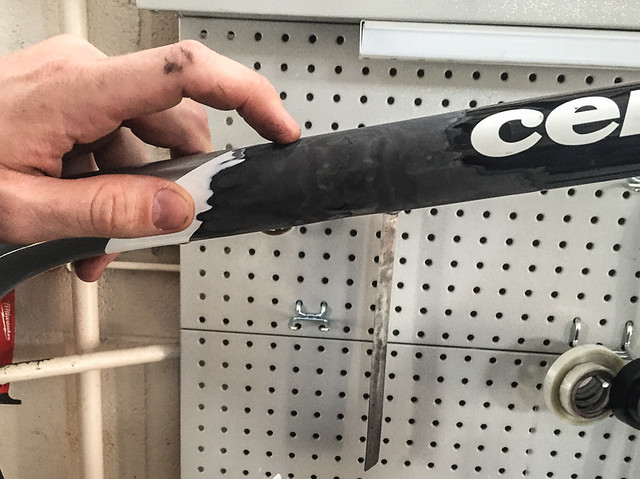 A top tube after being repaired. Once complete, you’ll never know it was repaired. 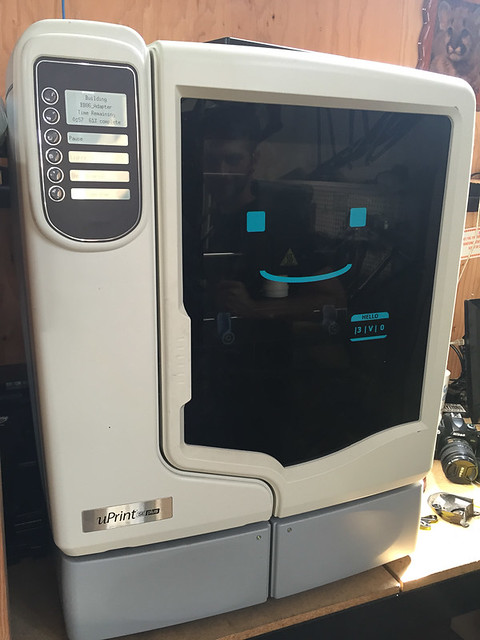 One of Ruckus’ 3d printers. 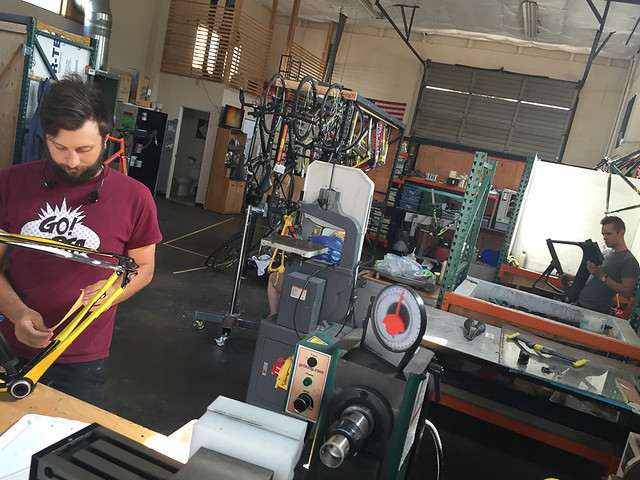 For Small, Ruckus doesn’t exist to simply fix broken bikes, they aim to make broken bikes better. All the carbon used in repairs is imported from Sweden in rolls just one-third of a millimeter thick. Small says it’s the best carbon fiber available because of its stiffness and purity. Beyond keeping people riding, Ruckus sees their mission as a way to keep carbon bikes out of landfills. “We give once broken frames a new life, fulfilling our fundamental concept of ‘remade in the USA,'” reads a company statement released today.

Small estimates about 4,800 bikes have come through Ruckus’ doors for repair. And none of the repairs have failed.

That’s a seriously good track record that has helped lead to serious growth for this small business. But it’s not all serious at Ruckus. If you’ve seen the Ruckus Test Team at the local races (hard to miss with their perenially outlandish team kit) or if you follow them on Instagram, you’ll know that the people behind this brand are as silly as they are smart. Last year Small built a 28-foot long, 40-pound carbon fiber glider and entered it into the Red Bull Flugtag flying competition. He’s also gained a bit of celebrity for launching a hot dog into space.

It’s all about having fun and being open to new ideas. In a statement today about the new hires, Ruckus said they plan to continue to expand their technical expertise and educate more bike shops around the country about carbon repair. “We are also thinking heavily,” the statement continued, “about what sort of bike should be on the first Mars Colony.”

There’s an .STL I’d love to print if Ruckus can make my small bike part for less than the $200+ quoted elsewhere. Plastic won’t do.

Jonathan thanks for the great story! We are excited to be a part of this wonderful community.

@Champs we print in a ABS+ material but we also work with a few other vendors for our metal printing needs. But it is a pricey. Email me and I can help lead you down that path

I applaud that somebody is out there repairing carbon fiber frames so they don’t have to go into a landfill. I do wish the bicycling industry could have a real conversation about the environmental impact of carbon fiber. From what I have seen the raw materials and the actual production of carbon fiber is energy intensive and not friendly to the environment. Add the fact that we currently have no way to recycle carbon and it appears the cycling industry is both putting there head in the sand and/or kicking the can down the road in the hopes that someone can develop a less energy intensive way to produce carbon and a way to recycle it. Despite how this reads, I am not anti carbon, I just wish that the cycling industry could have an honest conversation about it.

The bicycling industry is a business and their goal is to make money like everyone else. Plenty of ***inappropriate label deleted*** willing to shell out big bucks for carbon gear.

You can’t even say ‘FRED’ on BikePortland? Geesh.

No you can’t. That’s a mean label and I really don’t like how it creates this hint that there are some people who just aren’t cool enough to be part of “our” little clique. Figure out a different way to describe new riders or riders that have different approach to riding. thanks.

I have personally recycle carbon fiber parts so I’m not sure where you are getting your information. There is also a rapidly growing market in recycled non-structural carbon fiber as can be seen by the use of carbon fiber in laptops, phones, airplane interiors, cars, and in buildings.

Great Nich fixing FRP (fiber reinforced polymer) frames. I am curious are most of these frames damaged from crashes? rough handling,improper mounting of components or fatigue?

It’s mostly people leaving their sweet time trial bikes on their roof racks while driving into their garage. Or a bitter ex with a hammer. or a forest fire.

I lost a portion of the rear dropout tab when my rear derailleur jammed during an upshift (picked up a rock maybe?). Tiny piece of the frame but just in a critical location. These days you buy a high-modulus frame and bolted onto it is an aluminum derailleur hangar that’s probably harder to shear than the carbon it’s screwed into. (For those that don’t know, the rear derailleur (RD) hangar is designed to break the RD off to save the frame in case the chain jams – all that power has to go somewhere).

I was recommended to this shop and I sent them photos. They replied promptly with a quote for a road-worthy repair and described their repair approach in full detail. I deemed it not worth the cost of repair (it was the price I paid for the frame, but I had paid cost). I didn’t find the quote that unreasonable, and they described the proper way to repair this – you couldn’t just glue the missing material back on. I bought a replacement derailleur hangar and concrete/metal epoxy for <$20 and did just that, though, to create a dedicated trainer frame just in time for the rain. (It is ugly and I sure wouldn't ride it on the road, but the trainer housing itself is really what now provides the necessary structural rigidity).

As to the demolished RD-6770 Di2 derailleur, I bought a long-cage mechanical 10-speed Ultegra RD on closeout and swapped its cage for the demolished one. I swapped the full Di2 drivetrain over to my CX bike, adjusted the B-screw and installed a 32-11 cassette (RD-6770 specs 28T max with its short cage), and swapped the old mechanical drivetrain onto the trainer frame. I lost a sweet road bike but sweetened up my CX bike as a consolation prize.

I'm sorry I didn't become a customer, but I'm glad to see them growing! I spoke with two other carbon repair shops, and if I'd gone ahead with the full repair it would definitely have been with Ruckus. I'm sure there'll be other future opportunities to engage their services, unfortunately… 😉

This is really great! 10 years and expanding. Love it! We use Ruckus somewhat regularly for misc upgrades and customer projects, along with some personal stuff like custom paint matching and fender mounts on forks that would otherwise be fenderless. Good work!

Middle of the Road Guy
Reply to  Mitch

Very cool, not only what they do but also that they’re growing. Kudos.

I interviewed with these guys last year and got to talk to Shawn for a couple of hours. Great company, great ideas! Total envy on the new hires…

Colorado is really happy for you guys!

Three quick stories of work by Ruckus: Sent a customer’s older CF frame there, big bashed in spot on the down tube. Immaculate repair, still riding it four years later. Referred another self-employed mechanic there to replace a cable stop on one of his customers’ frames. Did a nifty repair while he waited, got someone else back on the road. This past summer, a customer of mine looking for an upgrade for his daughter’s al frame snagged an abandoned repair from Ruckus, a nice Giant TCR with a big piece of new top tube for a very reasonable price. Now a high school kid has great bait to get her riding more! Ruckus rules!