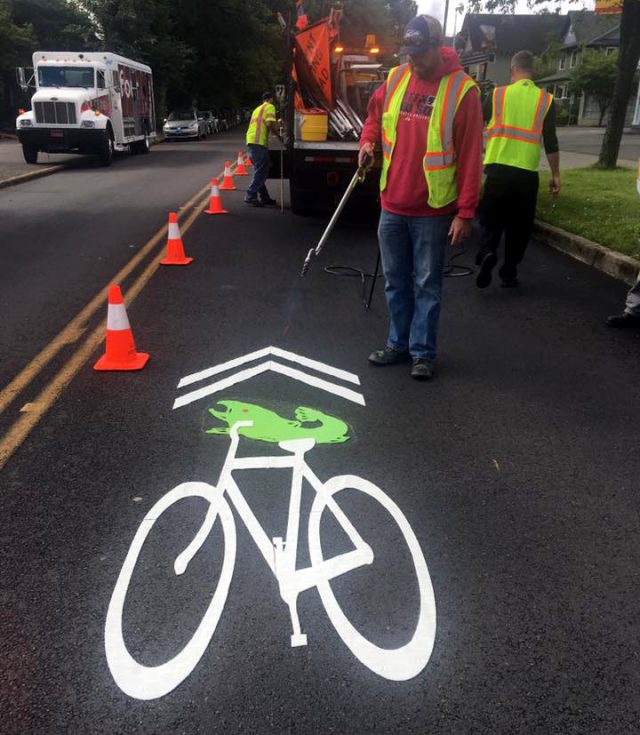 Fish don’t need bicycles. But hey, once in a while they can be useful.

Portland city workers have been putting the fun in infrastructure for many years now, but the generation of color-enhanced thermoplastic stencils that started hitting the streets in 2014 reached new levels of complexity, detail and topical references.

As we wrote last year, the cool thing about this tradition isn’t that the public is getting a little cultural and economic value (which these definitely provide) for free. The cool thing is that Portland is the sort of city that hires the sort of people who are motivated to do things like this on their own time.

nice bike salmon, shouldn’t it be facing the other way though?

I love the animals on bikes…think I saw a moose earlier this week. The RACC (Regional Arts and Culture Council) should put some funds into this kind of thing instead of spending all their arts tax revenue on hideous sculpture like the “Pile of Rusting Girders” statue at the east end of the Hawthorne Bridge.

a great Portland picture… road maintenance, bicycling, and illegal parking… all it’s missing is 2 row houses next to a craftsman…

Middle of the Road guy
Reply to  Spiffy

Well, someone complaining on BikePortland does kind of tie it all together.

I too, often feel like a fish out of water when I cycle on Portland streets.

Maybe they can put a violin on a bike for you too.

I feel like it would be difficult to play a violin and ride a bike at the same time.

Just slow down a bit.

This reminds me of the last few seconds of this Guinness ad from the 1990s:

Are we really still pretending like this is not done on City time? It’s kind of silly.

And that’s precisely why we should do it. I think we could use a bit more silliness around here.

Dan A
Reply to  Joe

You can tune a bicycle, but you can’t tuna fish.

What I love about these, is, like all good art, the interpretation lies with the viewer… so far we’ve had folks reference Gloria Steinem, “salmon-ing”, Dr. Seuss, fish out of water, and a tuna fish joke.

With almost none of our motorists understanding what our basic MUTCD signage means, I’m not a fan of adulterating the signs and pavement markings no matter how cute.

Adam
Reply to  B. Carfree

Especially since sharrows are meaningless anyway. 😉

B. Carfree
Reply to  Adam

Not quite. They are an explicit statement by the controlling traffic engineer that the lane is too narrow for a motor vehicle to safely (or legally) pass a cyclist while remaining in the lane. This also removes the requirement that cyclists ride as far to the right as practicable.

Sure, it should be obvious that any lane narrower than fourteen feet can be treated this way, but sharrow markings just make it explicit.

paikiala
Reply to  B. Carfree

where did you get that interpretation – citation please?

Sharrows, in Portland, denote a street motorists should expect to find higher numbers of cyclists on, as well as provide guidance to cyclists on the greenway bike route.

MUTCD 9C.07 is the ‘official’ statement of purpose.

Where in the MUTCD does it state that drivers must aggressively zoom around cyclists riding on streets with sharrows?

Adam
Reply to  Chris I

He was just here.

A woman without a man is like a fish without a bicycle.

My ex used to say that like it was deeply significant. Now she is without a man, but has a bicycle. So that’s something.

Speaking as a man who owns a bicycle, I can definitively tell you that bicycles are more useful. 🙂

It’s nice to see PBOT tacitly endorse bike salmon!
Along with metro’s endorsement of the Idaho stop this reinforces the progressive attitude of our local governments when it comes to cycling behavior.

Looking forward to the day when we have actual functioning bike infrastructure that whimsically pays homage to sharrows, that silly useless faux-infrastructure craze of the teens.

I once asked Gloria Steinem if she had an aquarium.

She said she didn’t. Smiling, she asked me why I asked.

I told her if she did, I was going to give her a tiny bicycle for her aquarium with an even smaller little rear license plate that said ‘Just in Case’

Anyone know what street this is on?

As a man, I can live without fish, or women…but not my bicycle. Honestly.

Ah yes, as useful as a bicycle to a fish. Some might say a useful idiom for describing sharrows. Any idea if the worker responsible was seeking the satirical commentary, or just having fun?

Where is this green fish art please?