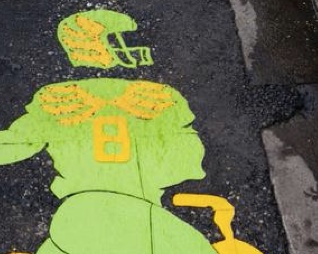 PBOT is back to having fun with bike lane symbols.
(Photo courtesy City of Portland)

15 years after if first started, a fun City of Portland tradition seems to be making a comeback.

In 1999, a city employee named Todd Roberts decided to create a little hat from a piece of thermoplastic left over from installation of a bike lane symbol. After that, dozens of bike lane characters began to appear throughout Portland. In 2009, we shared a slideshow of the characters compiled by one of their biggest fans — northeast Portland resident Jim Waigand.

Unfortunately, for the past several years it’s seemed like PBOT crews had stopped laying down these whimsical symbols. I hadn’t seen or heard about any new ones and assumed it was just another part of Portland’s past cycling swagger that has recently gone missing.

But a few weeks ago I was excited to see the tradition return.

There have been two new bike lane characters installed by PBOT in the past month. On December 8th, PBOT posted this “Transportation Superhero” character on their Facebook page. 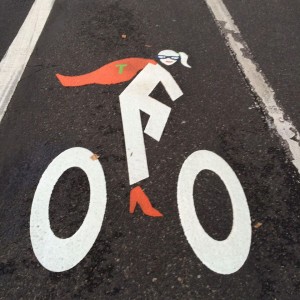 And then two days before Christmas, they tweeted what is perhaps their most colorful and ornate bike lane character ever: a likeness of University of Oregon quarterback Marcus Mariota to commemorate his Heisman Trophy…

You can see the superhero as you ride south on N Vancouver Avenue just before you get to Russell. The green quarterback is located right outside the Duck Store in the southbound bike lane on Naito south of NW Couch. (It’s common for PBOT to place the characters in geographically signification locations. Years ago they laid down a soccer-themed symbol outside Merlo Field on N Willamette — the home of the NCAA championship-winning University of Portland women’s soccer team.)

Many people love seeing these characters as they ride by. They remind us our streets are alive, that our public servants love their work and aren’t afraid to show it, and they’re a welcome respite from a routine commute. But of course other people see them as a waste of precious city resources. To those folks, PBOT is quick to point out that these characters are created by staff on their own time with materials that would otherwise be unused.

We’re keeping our eyes peeled for the next one. Perhaps a cargo bike full of shopping bags on NE Multnomah outside of Lloyd Center Mall?

— For more on this local tradition read Jim Waigaind’s article, Artists of the Asphalt, which appeared in the September 2003 edition of Velo Vision magazine. (PDF)

Three cheers for whimsy!
I normally don’t have much nice to say about how PBOT handles anything to do with vision or bikes or future contingencies, but this is delightful.

Any word if the one by OHSU was done by PDOT? There is now a horse rider instead of the normal biker.

It’s on Terwilliger just after the main turn in.

And of course it’s ABSOLUTELY CRITICAL for PBOT to clarify that these tiny concessions to fun and local spirit were done with leftover scraps, on employees’ own time, completely cost free –by magic, even! — rather than risk a word of outage from the ever-outraged citizens of Oregonlive.

Okay I’m done being sardonic for the day.

I have enjoyed the superhero. She brightens my day everytime I see her.

I have enjoyed the horse rider (an elf?) on terwilliger near OHSU as well!

I love them, to a point. A couple of small additions, like the superhero girl, don’t distract much from the original function and can add some fun to everyone’s day. When they get too big, though, like the Heisman thing, it makes me think twice. At some point they make it difficult to discern the meaning of the symbol. I look at it this way: they’re street signage like any other. How much could we change a stop sign and have it still function as a stop sign?

PBOT: Keep up the creativity, but don’t go overboard.

And with attitudes like these we don’t have to wonder too hard why “portland’s past cycling swagger” went missing. Or whether it’s ever coming back.

Thanks for wasting more money City of Portland

If the City of Portland is held by the “1% of spending shall be dedicated to art” then we are owed more of these diverse symbols. These small, simple graphics are art. They humanize PDOT, they reflect diversity in the realm of bicycle users and they make road users smile. Any crank can find stuff to complain about and the workers who designed and installed these pieces knew full well that they would receive a few petty complaints. For them to contribute to Portland’s quality of life (in a small way) in the face of complainers makes these markings all the more valuable. Hardly a waste of money.

Angela, where was the money wasted? The article states that he used scraps, that is, pieces that were going to get tossed anyway.

I believe this simple stuff can help safety for everyone.

Wow!! What an arm! Look at that asphalt patch where he spiked the ball into the concrete curb!

noticed the ducks design yesterday on way to waterfront. almost took a pic.

I love this kind of art. Now, if we could just get one of Schnoz on a bike and locate it on the NE Multnomah bike line outside Moda Center.

Jonathan, just for the historical record, I’m pretty sure these began at least 3 years earlier than the 1999 date you stated. Seems like the SW Broadway “martini man” removal (circa 2006?) ended this – left a bad taste (after all, not everyone fancies gin) perhaps? Glad that it’s started back up after the hiatus, there’s some serious creativity on the pavement markings crew…

Speed bump art has typically taken the place of the bikeman art.

I heard long ago that the city had stopped installing these because of complaints after the “coctail rider” was installed on SW Broadway because of the drinking while riding connotation. I’m not actually sure, just a story I heard.