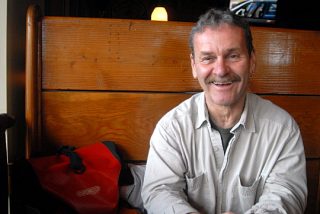 Three out of four east Portlanders who voted last month didn’t vote for the local gas tax. But given how their area’s been treated in the last few decades, can you blame them?

That’s the perspective of one east Portland resident who supported the “Fix Our Streets” plan, commenting on Thursday’s post about gas tax voting patterns.

BikePortland reader Jim Chasse is part of an extremely effective network of east Portland advocates who’ve brought in tens of millions of dollars of budgeted commitments to east Portland streets over the next several years. If the city keeps those promises, he suggests, east Portlanders may notice.

Here’s what he said:

Having been an “Outer East Portland” resident since before the annexation, I clearly understand the outcome of the recent gas tax vote. For over 25 years the city and state have been promising transportation improvements for East Portland. To date, very little has been done. Many promises, little action. Hopefully that’s about to change as many proposed active transportation projects will occur in the next 3-5 years.

East Portland has been a great asset to the city for building inner city projects since annexation. We provide a great deal of revenue for improvements in the inner city, yet receive so little in return. Well, things are moving east because of the great schools, lower home prices, and a great diverse and involved community. It’s finally time to go east and doing it by bike makes a lot of sense.

Thanks to all of you for paying, and voting for the fuel tax. Please note that many of the projects that will be funded with the fuel tax will still be west of I205.

In a subsequent comment, reader Jim Labbe speculated that east Portland’s recent voting patterns on parks measures suggest that when the city delivers on its promises, it changes the vote counts.

That’s a pleasantly optimistic take on the future of Portland east of Interstate 205. And both Chasse and Labbe are optimists. But they’re definitely not fools.

Yes, we pay for good comments. This regular feature is sponsored by readers who’ve become BikePortland subscribers to keep our site and our community strong. We’ll be sending $5 and a little goodie bag to Chasse in thanks for this great addition. Watch your email!

I hope Portland delivers on its promises. Many folks feel they have enough reasons to be cynical and sometimes it’s hard to refute them.

Then again, wouldn’t it be lovely if the gas tax raised almost no revenue because people just stopped doing all that excess driving? Hey, I can day-dream, can’t I?

“We provide a great deal of revenue for improvements in the inner city, yet receive so little in return.”

What are the actual figures on that? I keep hearing it touted, but East Portland also has more area (costs more), lower density (costs more per person), and lower property prices (meaning lower revenue). How true is the Comment of the Week’s statement?

Chris I
Reply to  matt

The streetcar and other PDC districts are probably responsible for this. But tax revenue from the central city is also higher… Hopefully someone can provide some data.

As far as I know, there is no full accounting available, certainly not back very far. It is a very complex topic, and I also bet the City doesn’t really *want* to know the answer because whatever the a answer is, it’s going to piss someone off.

Personally, I don’t think it’s the right question to ask,
either. Should areas that put in more get more? Well, if the area puts in more because of intensity of use yes, if it’s because it’s a rich area no. I think poor areas should actually get BETTER infrastructure than rich areas regardless of who puts in more money because the poor have more fraught decisions about how to get around, so anything to make their options better gets extra points in my mind.

But to complicate your point about property values –
Property taxes here are not proportional to market value, and in an inequitable way.

Here’s an Oregonian article about it. It’s actually MUCH higher in East Portland than in North & Northeast Portland due to Measure 50. Basically, places (like N/NE Portland) that had low property values in 1995-6 but have appreciated tremendously since get an awesome deal on property tax, but places that haven’t appreciated much get a bad deal.
“Residents of the Boise neighborhood are getting the best deal. The average owner of a home valued between $250,000 and $300,000 there pays $1,459 per year.
In Lents, where property tax burdens are the highest, owners of homes valued between $250,000 and $300,000 can expect to pay a tax bill of about $4,463 per year.”
http://www.oregonlive.com/portland/index.ssf/2014/10/how_do_your_property_taxes_com.html

Actually, the City has done a pretty good job mapping the budget inequity since 2010 through its Budget Mapping project http://www.portlandoregon.gov/cbo/?c=54416.

I suggest looking at more than one fiscal year to see changes over time.

In addition to the property tax inequity that you describe so well, since East Portland residents have such bad bike and transit connections both internally and to the rest of the city, they are more likely going to need to drive everywhere, so they are more likely to purchase gasoline and to use gas more often than inner Portland residents. On top of that, the distance from East Portland to downtown is greater than anywhere else in the city, 7 to 11 miles each way, far greater than the 3 to 5 miles that bikes are best designed for, so they are more likely to drive to downtown, and thus more likely to have to pay to park there. So East Portlanders are thus hit 4 times towards subsidizing other city residents: They pay more property taxes, they pay at a higher rate, they pay for more gasoline, and they pay more for parking downtown.

And as the City’s own budget mapping shows, they get far fewer services.

Chris I
Reply to  David Hampsten

Gas taxes and parking fees do not subsidize my bike commute. They don’t even cover the road maintenance and land consumption of private car storage. The property taxes vs. tax dollars received is a valid point, but you are really stretching when you start including transportation taxes.

Yes! You saved me a lot of time to type this out! Having lived a great long time east of 82nd, it’s dangerous to walk, let alone bike through the neighborhoods, most of the ones I lived around weren’t even paved. And when they were paving, they were repaving already paved roads instead of the adjacent unpaved stretches. Fast moving traffic, no curbs for walking. I lived about 2 miles from a grocery store. (Whereas in the Hollywood district there are 6 within a half mile radius.) Half mile from the bus/Max, in which I would have to cross 82nd with no marked crosswalk or street light.

Before people can complain that it’s “not that bad” they need to live a week in our shoes.”

I don’t expect much to change for east Portland until we get a new city government where people have some skin in the game. This current council stinks and has little to no interest in making things better for residents out there. They are tax revenue and nothing more.

The problem isn’t who is on the council it’s how the council is set up. They represent the entire city, until you break it into districts that elect their own representative, those on council will focus on who helps them get elected, not on who they actually represent.

“We provide a great deal of revenue for improvements in the inner city, yet receive so little in return.”
I was also referring to the revenue East Portland provides for the Water Bureau and the Bureau of Environmental Services. We pay “on site” and “off site” stormwater management fees that, for me, cost about $75 quarterly. The rub is all of the stormwater from my property is dealt with on site. Most of the roads in East Portland have direction injection systems which don’t feed into the sewer system so we don’t contribute to those messy overflows that happened before the “Big Pipe Project”. I have applied for, and receive a rebate for the “on site” fees because I can prove that my stormwater is dealt with “on site”. I continue to pay the “off site” fees. These fees helped fund “The Big Pipe” project and build those pretty new Bio-swales you see popping up here, and there, in the inner city to take the burden off the sewer system. They capture stormwater before it reaches the sewers. Have you noticed where many of these facilities are being built? Yup, Neighborhood Greenways. PBOT and BES partner on Greenway projects. Anytime a new stormwater feature is built on a “Neighborhood Greenway” BES is funding it. It’s a partnership that works, but only if you have a “Neighborhood Greenway” with curbs. It’s made possible because East Portland residents help foot the bill……jim

“Anytime a new storm water feature is built on a “Neighborhood Greenway” BES is funding it. ”
Care to provide a citation for such a statement? ‘anytime’ is synonymous with ‘always’ and ‘all’ and this is false. The first couple of greenways were focused in areas that BES also was interested in so that significant features could be combined to reduce costs to PBOT. The Klickitat Greenway (23rd to 24th) and Going at 33rd, for example. This is not happening much anymore.
PBOT, and any other bureau that triggers the storm water manual, is subject and liable to conforming to current standards related to storm water management, on their own dime.

There is also the larger issue. You might compare it to the highway trust fund donor states argument at the Federal level. Saying that east Portland does not benefit from the big pipe project is hard to believe at face value. It’s like saying ‘I have no kids in school, why do I pay taxes for that?”
You pay because all of Portland benefits, so all of Portland should contribute to the solution.

Gary B
Reply to  paikiala

Or, more to the point, east Portland residents presumably utilize the roads and other offsite stormwater sources that DO contribute to the the water in the Big Pipe. Just as I may use the East Portland roads that do not. That’s exactly the point of the offsite fee–to cover the costs of our citywide shared assets.

I would like to make Jim Chasse, the folks on this comment string and the wider Bike Portland community aware of an opportunity to get involved in ensuring that local transportation funds are spent in an accountable and transparent manner. Specifically, it’s an opportunity to ensure that the funds raised by Measure 26-173 (the gas tax) are used to deliver the projects Portlanders supported when they passed the measure in last month’s election.

As part of putting Measure 26-173 on the ballot, the City Council created an Oversight Committee. The Committee will have 16 members and, by ordinance, must represent a wide cross-section of Portland’s transportation stakeholders. The committee’s mandate is to monitor revenues, expenditures, and program and project implementation.

On Thursday, we released the application for the Oversight Committee, and we want to encourage interested Portlanders to apply. The application is due July 19th.

Here is a link to the application and to more information about the Fixing our Streets program, including the projects that are to be built with Measure 26 funds:

And here is the link to the press release from last week, which goes into more detail about the Oversight Committee, including the full description of the committee’s role:

I would encourage you to apply and also to forward this information to your networks. As Commissioner Novick said when we released the application, “We need a diverse group of community members to serve on this oversight committee to ensure implementation of these important projects.”