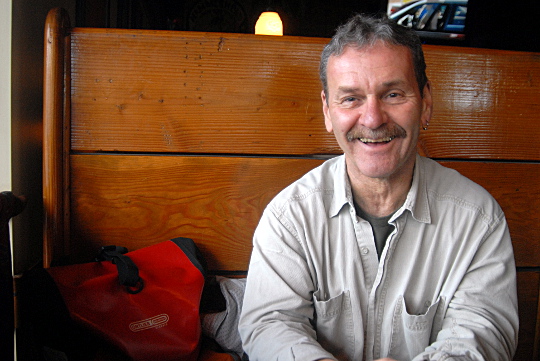 When East Portland biking advocate Jim Chasse met the young state legislator who had just ousted incumbent Patrick Sheehan, he got right to the point.

“I told Shemia Fagan, ‘This is what we need: We need Powell Boulevard,'” Chasse recalled Thursday. “‘We need $80 million, $60 million. And if you can’t get it for us, we’re just going to fire you.'”

“I could see with the expanse of east Portland being built as a driving community, that bike transportation would really, really work well out here.”
— Jim Chasse, EPAPbike member

You don’t become one of the most effective transportation advocates in Portland by mincing words.

A soft-spoken, good-natured member of the East Portland Action Plan’s bicycle subcommittee and an East Portland homeowner (at 116th and Powell) since 1986, Chasse is part of a team of neighborhood activists who have, with the help of professional East Portland advocate Lore Wintergreen, finally unlocked a steady stream of money for biking and walking improvements east of Interstate 205.

Chasse’s personal secret might be that his enthusiasm for what better biking could bring to East Portland is so guilelessly earnest and so deeply felt.

“It just makes too much sense,” Chasse, 58, said in an interview at McMenamins Mall 205. “Yeah, light rail is great. And bus service is absolutely critical. But I mean, I quit driving.”

For Chasse, it wasn’t an option: he has a mild epilepsy. After a change in medications sent him into a seizure, he was forbidden to drive for six months. A bike became his main way of commuting to work at an auto shop in inner Southeast Portland.

But Chasse had come around to the benefits of biking earlier, while representing East Portland on the Bicycle Master Plan approved by Portland City Council in 2010.

In part of the city that lacks the density to support great transit, he sees bikes as a ticket to freedom.

“It was like, wow,” he said. “I could see with the expanse of east Portland being built as a driving community, that bike transportation would really, really work well out here. It’s a long ways to get anywhere out here. What’s the quickest way? A car. And what’s the next quickest way? A bike.”

Today, Chasse keeps a map of East Portland’s zoning plan on a wall in his home and volunteers with the Bicycle Transportation Alliance, EPAP and other groups to keep the spigot of federal, state and city dollars flowing into the East Portland in Motion plan, a document East Portlanders demanded in exchange for endorsement of the citywide bike plan.

“[City transportation planner] Mark Lear was saying ‘We’re going to get all these things for East Portland,'” Chasse recalled. “And we were like, ‘We’ve heard that before. We’re going to get the EPIM plan, or we’re not going to support this plan, period.’ And we got it. [Retired city project manager] Ellen Vanderslice got it together for us. It’s still not going to happen in five years, but we’re a lot farther than we’ve ever been. … The city’s finally stepped up and committed some money for East Portland. And you can’t be unhappy about that.”

Chasse’s No. 1 priority, as he told Rep. Fagan in his ultimatum, is getting walking and biking improvements on Powell Boulevard east of I-205.

It’d cost tens of millions, he says. But it’ll create new business, too, if it becomes easier to navigate the area without a car.

“Powell can stay relatively small, especially if we have high-capacity transit coming out on Division,” he said. “There’s enough room in and around the whole facility to do a really good buildup. Cycle tracks in some areas and bike lanes in the constrained areas. And definitely sidewalks. … There’s already an established business district at 122nd, 112th, and going down to the 205 interchange. And further out, at 136th, even if they’re just topless bars, it’s a business district.”

Bringing safe, comfortable biking and walking to his house, where he can still watch the birds fly among the 12 towering fir trees in his yard, would be a dream come true and a life’s work for Chasse.

“East Portland’s a great place,” he said. “It really is.”

As for Fagan, he said she’s done a fine job so far.

“She’s running for reelection,” he said, smiling. “I’ve yet to talk to her. But we’ll talk for sure.”

Not to be confused with the tragic story of James Chasse, mortal victim of PPB brutality…

Welcome to East Portland…great heartfelt and thoughtful people, delicious food, and beautiful places and parks to explore. So grateful for this bikeportland attention that can spark everyone’s thinking about making this area more accessible to all transportation modes. Someone said 5 years ago that there was nothing new in bike planning that could be done to improve bike travel here. People like Jim know that together there is just too much creativity and inventive problem solving in Portland’s bike community to not be able to make improvements in East Portland. Maybe someone will be inspired to bring folks together to look at the existing conditions and seriously consider imaginative approaches…addressing biking in areas like East Portland is simply the next necessary step.

Until new city leadership is in place that does not turn a blind eye to the needs of east Portland citizens, I fear nothing will change.

Hi Lore! Wondered where you were hanging out. They needed you on the N. Williams deal! Great bunch of stories guys. Also note a good piece in the Real Estate section of the NY Times from a few days ago about bike access making affordable parts of Brooklyn a bit too far from a subway line popular. (Watch out!) Maybe the focus on EP should be getting good bike access to the Red, Blue and Green Lines for a combined mode travel.

What a co-in-ke-doik! This fine gentleman just introduced himself to me a few days ago and what I found out about him is that we have quite a few things in common! We both have epilepsy, both live in and love east county and both have a passion for cycling and accessibility!

Thanks for the bio! He has proven in our few correspondences to be a vault of knowledge and turns out I have some new meetings to be attending!

East County was built and resulted from a rejection of Portland and urban living. It was not built overnight, and cannot expect to be rebuilt overnight either. I wish Jim and those looking to make East Portland a more walkable/bikeable community the best. I expect they will be working on this for years. Since Powell is also US26, a State road, I expect any redesign will be a long time coming. Not wanting to sound doom and gloom, just saying this will be several generations worth of work.

Yep. I didn’t get into the ODOT issue here but Jim and I talked about it a lot. I thought Mayor Hales’s description of the Powell problem at the Oregon Active Transportation Summit was apt: it’s basically two people at a restaurant table who keep pushing the check back and forth. It’s Jim’s belief that a transfer to the city is probably the best way to improve the street for anything except auto speed/quantity.

Thanks bikeportland guys for the great piece on East Portland! We’re all looking forward to be able to ride on the low stress bike facilities in East Portland like the ones that already weave through the rest of our city. j

Vote Up0Vote Down
« PBOT has installed rumble strips in the Marine Drive bike lanes – UPDATED
PedalPalooza planner: 9 rides worth checking out (and one to blow off) for June 15-21 »