The Portland Bureau of Transportation wants your input on two very important issues: the Clinton Street traffic diverters and Vision Zero. They’ve released an online survey for each of them and we’d like to officially encourage you to take a few minutes and fill them out.


When PBOT installed traffic diverters on SE Clinton Street back in January you might have missed the fact that they were billed as only a temporary measure. In order to calm potential backlash and/or make the project less politically dicey, PBOT (smartly) did the project as an “evaluation.” Now they need to get public feedback to help inform whether or not the diverters should stay or go (or change). 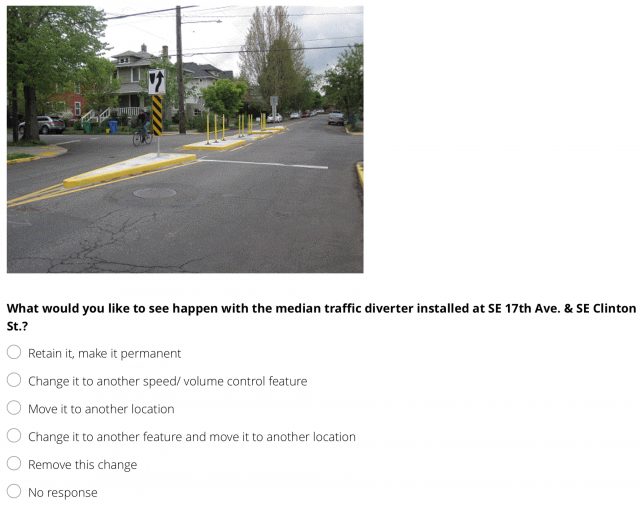 As we reported last week, many people who bike on Clinton say the diverters have helped a lot. Fewer people are driving on the street and in general, people who bike on it say it feels much more comfortable (citizen activist Josh Chernoff being a major exception). However you feel about the diverters, please let PBOT know. “The results will be used to determine if the diverters should be permanently installed,” says PBOT, “and where additional modifications for traffic calming (if any) are needed to achieve necessary traffic speed and volume results.”

Another area where PBOT wants your input is on their Vision Zero efforts. The city hosted its fourth Task Force meeting today and they’re starting to put together a draft plan that will be released at the end of August. PBOT safety staffer Clay Veka said at the meeting today that the main reason for the survey is to use people’s experiences and opinions in order to create more effective messaging and educational materials. Here the questions asked in the survey:

Please take a few minutes and let the city know what you think.

Thanks for posting these things. Very helpful!

Yes. Quite.
I’m curious if the average post-diverter traffic counts on Woodward show 1002/day but the overwhelming response from the public-that-fills-out-this-survey is positive what PBOT would do about the diverters?

More input is of course good, and there are plenty of other imagined responses, but when you ask for and suggest to your audience that you are going to base your decision on the outcomes of these various metrics you are setting yourself up for … well I’m not quite sure what.

I would love it if the bike route I live on had only 1002 cars per day.

PBOT has made it clear that their next step would be to do mitigation on the affected parallel streets. I think the diverters would only be removed if the problems were truly intractable, which they will not be.

Can we get some traffic-calming on the local-classification bikeway street that I live on, which has motor traffic volumes of over 6,000 cars per day?

I am a huge fan of having traffic diverters at every major intersection on every Greenway within two years.

In 2 years? It could be done this summer if the city felt like putting the effort into it.

Thanks for posting these links. I love the diverters, and I’m eager to make them permanent and see even more improvements (plaza at Clinton and 26th?).

I registered my opinion on the survey. Thanks for posting this!

I know activists may disagree with me, but I think the city benefits more and the changes are longer lasting if solutions to obvious problems are dealt with at the root rather than the leaf. The 17th and Clinton diverter is just bonkers to me, because the real problem is obviously seven corners! Smart drivers avoid poor engineering, especially when it loses them time and fuel, and you can count me as someone that will never ride my motorcycle or bicycle on Division through that warren of intersections during the day. Clinton became a pressure relief valve among the exasperated and a regular route to those in the know. Because of the railyard and Ladd’s Addition, there are simply no other alternatives.

The problem of poor engineering still persists that caused the invasion of Clinton to begin with. Where are those activists?

An addition I would like to make; “Lack of appropriate fines for a Violation that endangers or injures others”. Someone can lose a leg and the driver with a suspended license pays $260.

Something needs to be done about a lack of accountability for people who drive unsafely.

Personally, I don’t want the government fining people. Any and all money recovered should be going to the victim. Besides… this is Portland. By the time a fine has exceeded pocket change for some, we’ll have to start up the equity conversation and talk about subsidizing the poor violators.

We should criminalize dangerous driving and start handing out jail time. Mandatory. No pretty-face, good-family exemptions from the police, DA or judges. That’s not going to happen though since we, as a society, have little to no desire to hold anyone accountable for their “oops”.

Civil courts are our only outlet. Unfortunately, the only people we’re really collecting money from are the government… further confirming the fact that we’re not willing to hold individuals accountable. “It was the road’s fault.”

The Vision Zero survey assumes all users drive cars, as implied in the questions. It excludes bicyclists, pedestrians, and transit users who don’t drive at all.

The PBOT vision zero survey assumes that is always the (car) driver’s fault for hitting drunk or impaired pedestrians, or young children that dart out into traffic, even when car traffic is moving at posted speed limits.

Apparently, East Portland is not an option for living in Portland. Yet again the poorest quarter of the city is excluded from giving PBOT input.

“The Vision Zero survey assumes all users drive cars, as implied in the questions. ”

I just took it and didn’t come away with that feeling as someone who bikes everywhere. Can you provide an example of what you are talking about? I didn’t think the survey was terribly well written. There were questions where I would have liked to check more than one of the options where this was not possible: if someone kills someone else with their car, what would do you feel would be the appropriate punishment?
+ go to jail
+ lose license
+ fine
+ no punishment
(my recollection of the answer choices)

It only includes ‘hoods where the bikeway goes, plus the ones that immediately touch it. I agree, though, that it’d make sense to try to cover the “watershed” that uses the bikeway.

The diverter at 17th is as smartly designed as the one at 32nd is ill-advised in it’s design and placement. To pick just one serious flaw consider – at 17th NO left-hand turn is allowed from Clinton. At 32nd left-hand turns are allowed. Worse, cars are doing this from traffic speed – not from a stop sign. Why is this bad design? Cars can turn into approaching cyclists who are not well seen as well as traffic coming from the left. It’s especially bad at night because many cyclist have modest or no front lights. Poke around with Google on left-hand turn accident statistics to see how foolish it is to create this hazard for cyclist. The Oregonian has a story today of three who died trying to do a left-hand turn.