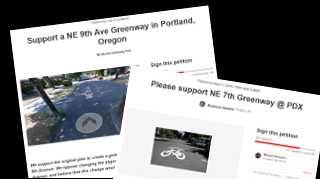 The debate over the best route for a future NE 7th/9th neighborhood greenway is, for the moment, largely about appearances. But in this week’s battle for appearances, backers of a 7th Avenue route are definitely winning.

As we mentioned in Monday’s coverage of this issue, an anonymous supporter of a 9th Avenue route launched a petition on Sunday in which he or she suggested that a 7th Avenue route would send traffic spilling onto other small residential streets. As of this writing, it’s got 50 signatures.

“To make routine bicycle commuting attractive for more people we need not just safe, but direct, fast, efficient, and smooth routes,” wrote Betsy Reese, a supporter of the 7th Avenue route. “I might meander along on NE 9th on a weekend ride, but a greenway on NE 7th is what would make commuting or running errands possible to routinely do by bicycle instead of by car.”

“As a father of 2 young children living on Brazee between MLK and 7th I strongly support this and see two important connected issues here: choosing a street for the north-south bike greenway and the second, more important, life-safety issue of the reduction of speed and volume of auto traffic on 7th,” wrote Collin Zimmerer-Mazza, another signer of the 7th Avenue petition.

Signatures have continued to trickle in for the 9th Avenue route too, though.

“While I recognize the need to improve the situation on 7th, I believe the proposal is well meaning but will create more problems,” wrote Eric Evans, who signed the 9th Avenue petition. “There is already significant cut-through traffic on at least NE 8th through NE 10th, with sometimes frightening speeds. Turning NE 7th into a dedicated bikeway will only worsen conditions on these neighborhood streets.”

“I don’t understand the 7th option,” wrote someone else who gave his name as Richard Nimby. “NE 9th is a win-win for everyone. The terrain is steeper on 9th, so that’s better for the cyclists’ health.”

The Portland City Council is scheduled to vote this afternoon on the first major decision related to this route: whether to designate 7th as the “planning-level” route south of Sumner Street, and 9th as the route north of Sumner.

Regardless of that vote, the city is a long way from actual implementation or funding of this project, so it could change. But today’s decisions — and this week’s petitions — will determine where public conversations about this project begin.

We’ll update this post when we learn what happens at council.

Update 5/2: The council voted to delay decision on 7th/9th until May 11, to give council members more time to assess recent testimony.

Maybe Mr. Nimby ( Ironic name) should get out of his car and a bike full time to get some exercise.

While I guess it’s possible that there’s a Dick Nimby out there using the public process to help cyclists get more exercise, I’d put my money on that post being satire.

I suspected the same (and couldn’t find a Richard Nimby from a quick public records search) but other than the name, it doesn’t read like satire.

Really? It reads very much like satire to me. Market as a premier bikeway without spending money? Sounds a lot like the “platinum” comments on here.

Reads like satire to me. I’ll bet $20 there is no such person.

Poe’s law is an Internet adage which states that, without a clear indicator of the author’s intent, parodies of extreme views will be mistaken by some readers or viewers for sincere expressions of the parodied views.

Hi Michael, You should re-read Voltaire. The best satire doesn’t read like satire.

Yeah, I definitely thought the “9th is steeper” comment was going for sarcasm.

Also, it’s gotten a bit testy on NextDoor about this issue. Bring your popcorn, all.

i’d pop some corn but only “locals” get to watch the fireworks.

To Eric Evans’s remarks from the petition:

Under current conditions, autos spilling over to 8th seems natural (if crummy) when people expect 7th to be available and find it isn’t or that it’s backed up.

I expect that same behavior will go away once people learn that 7th is no longer open to through auto traffic, and people will change their regular habits and use MLK or 15th by default. There will be no more, “Surprise, no 7th — 8th is the next easiest”.

I signed the petition for 7th. It is a much better route for me, even when I’m coming from downtown, but especially when I’m coming from SE. 9th is slightly closer to where I’d be coming from and going, but the detour through the park, the stroad of 9th in The Lloyd district and the extra hilliness aren’t worth it. 7th is way better.

Any news on the council vote?

I watched the video online. They weren’t sure what to do with the project considering all the conflicting testimony, and decided they needed more time to process. They passed the other project amendments, but pulled this one to consider again at their May 11th meeting.

my rebuttals to the anti-7th petition and comments:

False. NE 7th is a Local Service traffic street in the city’s Transportation System Plan. Its function is to provide access between the private property and higher classified streets, not as a through street for non-local auto traffic.

• …the proposed change does not take into account the high cost of removing these dangerous features (traffic circles).

• The proposed 7th Ave alignment would divert ~4000 of those cars onto adjacent, one-lane residential streets.

False. PBOT has an established policy that local service streets adjacent to a neighborhood greenway project cannot increase in volume above 1,000 auto trips per day. If excessive diversion occurs to an adjacent local service street, PBOT will mitigate that change up to and including modifying the original project. PBOT tests diversion before making it permanent so adjustments can be made if needed.

• NE 9th Ave is light enough that there are no traffic counts available at all.

False. More recent speed and volume counts already exist for locations north of Halsey, Oregon, Holladay and south of Brazee and Thompson. Older counts are available near Highland, Roselawn and Wygant. Several blocks of 7th also do not have counts, but that does not mean 7th has no traffic.

• 7th is also used as an escape from the long lines of cars on MLK.

True. This use of 7th is not part of its intended function as a local service street. The Transportation System Plan permits changes on streets that are not performing as intended.

• 7th should definitely NOT be a greenway, doesn’t meet the criteria.

• Seconds count, as we all know when an ambulance was not able to navigate the NE Rodney Greenway traffic diverters, and a woman died.

This claim cannot be confirmed at this time. In general, almost all diverters are designed for a fire truck to cross over, or pass through. Additionally, Portland Fire and Rescue is the first responder to most emergencies, including medical emergencies, and are always involved in proposals to add diversion so that their automated routing maps will have the most up to date information.

• …changing it to 7th Avenue will divert too many more cars to my street (15th Avenue), a street that is already beyond capacity.

False. NE 15th Avenue is designated as a Neighborhood Collector traffic street, the next classification higher than NE 7th’s Local Service designation. The purpose of a neighborhood collector is to provide a connection between lower classified and higher classified streets. NE 15th currently serves about 8,000 vehicle trips per day on a 36-foot wide street. NE 33rd Avenue, a street of similar width but higher classification, currently serves about 20,000 vehicle trips per day (near Brazee/Thompson). To say that 15th Avenue has already exceeded its capacity to move traffic is without credibility.

• The city can market 9th as a premier bikeway without really having to spend any money on upgrades.

False. The desirability of a greenway depends on more than just the segments cyclist travel along. The safety of the crossings and ease of use are two other factors very important to success. Improving crossings can cost as little as a couple thousand dollars to over a quarter million for a full signal. Crossing Killingsworth at 9th will cost at least as much as crossing at 7th, and both Fremont and Alberta already have signals at 7th, while 9th crossings have no upgrades at all. The 9th alignment also goes through a park that would require a separate pathway around the east perimeter. 7th has no such new pathways to construct.

• There is already significant cut-through traffic on at least NE 8th through NE 10th.

False. A review of available data found some high counts, near 800 trips per day, adjacent to Irvington Elementary, but overall most counts in the neighborhood on north-south streets were below 600 trips per day. PBOT does not typically initiate a greenway project without significant data collection to gage the effects of changes on adjacent streets due to project construction. If a project is ever initiated to modify 7th to function safely for all users, updated counts will be gathered to make sure any unintended changes can be addressed.

• I don’t feel there are enough details in place to make sure the traffic doesn’t move to neighboring side streets.

Agreed. The proposal is to change a street’s classification in regards to a single mode of traffic, biking. There have been no plans created yet on how to implement the greenway, or on how to monitor or mitigate diversion.

• … Albina Head Start. This facility needs more than a single direction in and out. Removing parent’s access from 7th will be a traffic nightmare.

Unclear. As there is no plan yet on how to implement a neighborhood greenway on 7th Avenue, it is truly too soon to say what adjustments will be needed.

• …the increasing popularity of bicycle commuting us unlikely to outpace the growth of population density.

Unclear. The citizens of Portland have repeatedly expressed their reluctance to construct the roadways needed to accommodate future growth. That said, even if residents were able to pay for such a system, the number and sizes of roads needed would make Portland an inhospitable place to live. Increased density can reduce the need to drive, and is likely to be part of the solution, but so is making it easier for residents to choose ways to get around other than driving alone in a car. Neighborhood greenways are part of the puzzle to solving this future problem of congestion.

Wow! Point by point rebuttal, very well said. You should send this to City Council.

Thank you for this.

This is worthy of its own blog post. Thank you.

First, in response to paikala’s comment, I checked with the PBOT coordinator who met with neighbors to find out if this statement is true (hopeful that it was):

“PBOT has an established policy that local service streets adjacent to a neighborhood greenway project cannot increase in volume above 1,000 auto trips per day”

He answered very clearly that it is not. PBOT is reluctant to discuss actual plans at this point, which I understand, and they’re definitely not making any promises about mitigating the effects to nearby streets.

Lastly, to the author, quoting a sarcastic and obviously phony petition comment doesn’t help the conversation.

According to the article, the vote was delayed to May 11. Does anyone have an update on the results? Thanks.