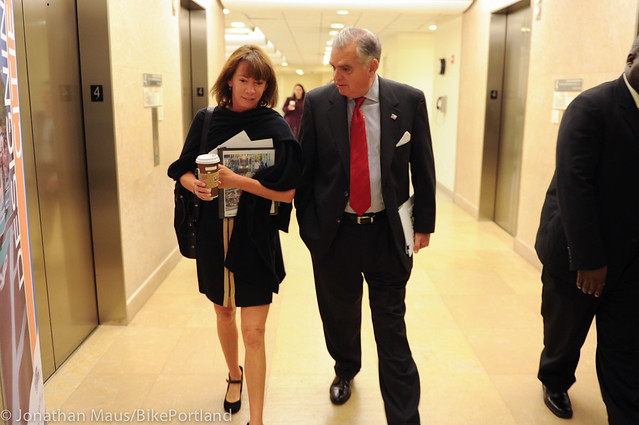 Janette Sadik-Khan is not an easy woman to move off target.

The New York City transportation commissioner from 2007 to 2013 rose to international fame as the force of nature behind the rapid redesign of many New York City streets. Her department of transportation, under former Mayor Michael Bloomberg, reintroduced protected bike lanes to the United States, launched the country’s biggest bike-sharing system, doubled bike counts and inspired dreamers around the world by rearranging unnecessary auto space into bustling pedestrian plazas like Times Square.

“What we’re talking about is making our streets perform better and making our cities perform better. There’s no Republican or Democratic way to design a street that works.”
— Janette Sadik-Khan, former NYC transportation commissioner

JSK (as she’s known to some fans) is equally driven in media interviews: dogged in her opinions and deft in steering the conversation where she wants it. But with the national tour for her new book Streetfight: Handbook for an Urban Revolution bringing her to speak in Portland this month, we braved her gale-force personality and caught up for a conversation about transportation politics, her new gig as a globetrotting consultant for Bloomberg Associates, and her favorite things about PDX.

Q: Have you been to Portland much before?

A: I think like five or six times. My husband went to college at Lewis and Clark. A friend of mine plays in a band. I’ve got a lot of good friends out there.

You talk to a lot of people around the world. Is it your sense that Portland is still perceived as being on the cutting edge of urban policy, or have we lost some of that luster?

I think Portland’s always been a leader for cities in the United States and cities around the world, and I think it continues to have that reputation. And it really did all start when you look at the urban growth boundaries that were established in the 1970s. But I think other cities are catching up, too.

A lot of your work now is focused on cities abroad — I’ve been assuming the basic idea is to export Bloombergian transportation thinking to other growing cities. Is that right?

We’re powerfully focused on helping mayors improve the quality of life for citizens in our cities. It’s not like directly importing what works in New York. What we’re doing is providing ideas and methods so that people can tailor them to their own streets.

One of the things I’ve learned in my travels is that people see the Bloomberg approach as being tied to policy instead of politics. Strategies that make streets safer and make it easier to get around don’t apply only to New York or to any one city [but] there’s no one size fits all solution to cities around the world. When we were planning Citi Bike we took a lot from London and Paris, and then we looked around and found that other systems ran on solar power, so we did that too. I think there’s a lot of that in Streetfight, which is the book that we just wrote. 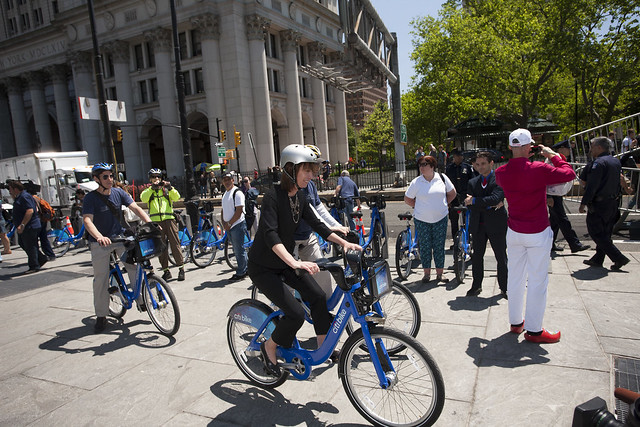 Right. The book is sort of a combination of manifesto and memoir? What period does it cover?

Other than European cities, what’s a city you’ve come across that’s doing interesting things? What’s something we can learn from a city in, say, Africa?

Addis [Ababa, Ethiopia] — they have a real problem with cars and trucks really invading the cities. They literally painted a red line on the streets and clearly marked it as protected streets for pedestrians. Low-cost solutions don’t cost a lot.

I think what we’ve learned is that there’s a lot we can do with paint and planters and a few signs. I think you’re also seeing a lot of cities find that they can use data to make the case.

How universal is the appeal of New York-style innovations? What signs do you have that people are really interested in what you’re selling?

You see a lot of cities coming to New York and different places. We have cities that are hungry to learn what we did in New York. You’re not going to build your way out of congestion; you have to use your [existing] capital assets.

I think the fact that we’re even today talking about streets is itself a transformation. Just a few years ago, pedestrian plazas and bike share and protected bike lanes were foreign concepts in American cities. Today there’s a new world order. 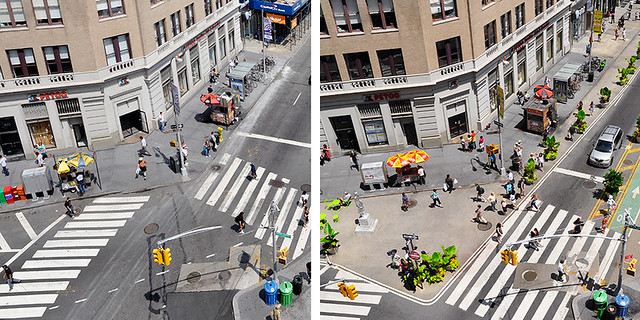 New York City’s Union Square, before and after.

Did you have to make a sort of sale of your ideas to the mayor to bring him around, or was he receptive to them from the beginning?

When I first interviewed with Mayor Bloomberg I talked about a vision for streets that had better bus service, streets that were safer for pedestrians, streets that had better bike lanes. As I say in the book, there was not a lot of reaction to those comments, and I actually left the room after that interview feeling like I didn’t get the job. What I didn’t know at the time was that Mayor Bloomberg was on the cusp of releasing PlaNYC, this long-range sustainability plan. We established that if we’re not going to build more roads, we need to use what we had more efficiently.

It seems to me as if we’re on the edge of a situation where urbanist transportation policies go from being fairly nonpartisan to being clearly associated with liberals and the Democratic Party. Is there a way we can stop these issues from getting trapped in partisan politics?

A really important part of this book is that we tell people how to read the streets step by step and ways to talk about and measure what happens.

What it really comes down to is choice: it’s not anti-car. It’s pro-choice. People make rational choices for getting around.

But you wouldn’t deny that there are still winners and losers. How can that not become political?

I think that building streets that provide options for everybody, not just behind the windshield, is a fight. Every inch of the 180 acres we reclaimed from cars was a fight. 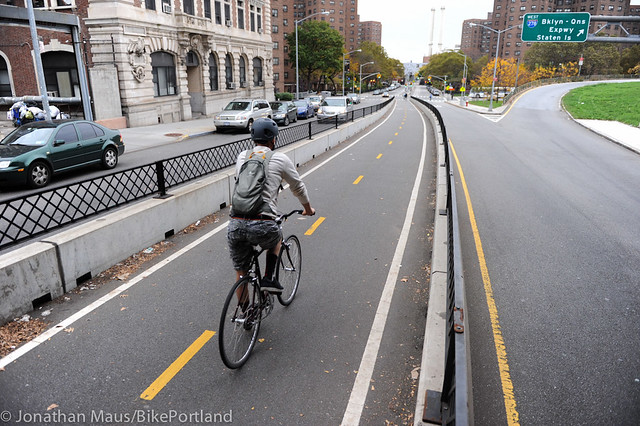 I was most recently in Medellín, Colombia. And I have to say, the innovative transportation infrastructure that they have there that’s married to the social infrastructure — it’s one of the most inspiring places I’ve been.

You’re talking about the cable car to the library?

And the escalators, all of that. It’s just incredible.

What’s your advice on institutionalizing change? You introduced a lot of changes at NYCDOT. How much is it possible to get those ideas to stick around to the next administration?

We didn’t see any rollback in the programs in New York City. In many cases, the people are really far ahead of the press and politicians. We saw 73 percent support for the bike share, 72 percent for plazas and 64 percent for bike lanes. If this was an election, it would be a landslide.

About six months ago, there was a kerfuffle in Times Square. The new administration suggested that they were going to rip up the plazas to deal with the problem. The response was extraordinary: it was a huge backlash. People were like, Don’t you dare touch these plazas. It was interesting to see. People have a good understanding what a better street is, what a safer street is.

I remember when I was riding on the back of my husband’s bike when he clerked downtown for a judge. We rode our bikes on these streets that were just completely filled with potholes. Even then it was an exciting ride, and I kept thinking what you could do with these streets if you had the power to do so. I know that not everybody’s going to bike and not everybody’s going to walk, but streets that are built for biking and walking are better for everyone, even people who drive.

What’s your plan for downtime in Portland?

Qs & As edited. Sadik-Khan speaks at a free Metro-sponsored event at the Mission Theater, 1624 NW Glisan St., at 6:30 p.m. on Wednesday, March 23; and have a conversation with Congressman Earl Blumenauer in the Pearl Room atop Powell’s City of Books, 1005 W. Burnside, at 7:30 p.m. on the next day, March 24. RSVP to the Metro event is encouraged.

The media training is obvious in her answers (“in my book, I said..”). Not terrible though.

I think paint works only if it’s respected. I don’t know how we get there.

Paint will be respected (and obsolete) when only computers are allowed to drive. Not before.

My take away: “People see the Bloomberg approach as being tied to policy instead of politics.”

No, it’s anti car or pro car. Any compromise is politics for politics sake.