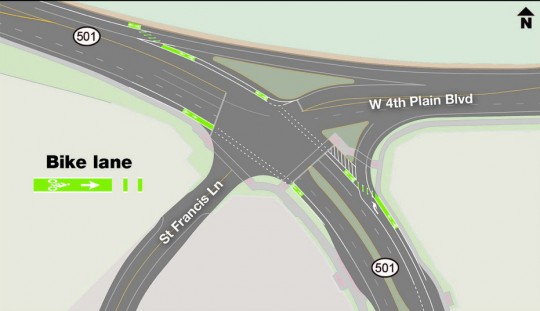 The Washington State Department of Transportation is going green to try and make a large highway intersection a bit safer to ride a bike on.


“Adding a splash of green to the existing bike lanes will enhance safety by adding a visual cue for drivers to lookout for cyclists on the road.”
— Rick Keniston, WSDOT Regional Traffic Engineer

Last week WSDOT announced they plan to restripe the intersection of West Fourth Plain Blvd and State Route 501 with what one of their regional traffic engineers called, “A splash of green.” It will be the first time ever that the agency has used green on a bike lane.

The location (map) is northwest of downtown Vancouver, about two miles (as the crow flies) north of Jantzen Beach shopping center in Portland. The intersection is on a popular cycling route that connects to Vancouver Lake via Fruit Valley Road.

In a statement about the project WSDOT said this is being done to “help drivers spot cyclists through busy intersections” and to “promote multimodal use of SR 501.” They plan to make this a pilot project and consider using it in other places throughout the state if it works well. 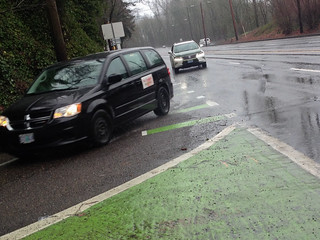 “There are spots at this intersection where the bike lane disappears as it passes through right-turn lanes and merge areas, which can confuse all users of the road. Adding a splash of green to the existing bike lanes will enhance safety by adding a visual cue for drivers to lookout for cyclists on the road.”

WSDOT says the new “durable” green paint is designed to hold up to heavy traffic and rainy weather, “while still providing roadway friction for bicycle tires.”

If you recall, the Oregon Department of Transportation first added green to bike lanes in March 2012. ODOT’s application was on a very busy and unpleasant section of SW Barbur Blvd. I don’t ride this Vancouver intersection very often, but if my experience on using bike lanes on state-controlled highways is any indication, it will take a lot more than simply a “splash of green” on the ground to truly improve safety and promote cycling.

What an abomination that intersection is. By giving the right of way to motorists transitioning from W 4th Plain Blvd onto hwy 501 over cyclists who are continuing on hwy 501, and by abruptly ending the bike lane at the same place (if only Scotty could beam us over to where it starts again), it’s a hopeless situation.

Rather than putting a splash of green paint at this unnecessary conflict zone, why not give a stop sign, or at least a yield sign, to the entering motorists and continue the bike lane on through? I’ve encountered such substandard road engineering in other locales and the only way to deal with it is to take the lane prior to the end of the bike lane and then change lanes over to the newly-created lane on the right before entering the restarted bike lane.

Further back up the road that slip lane with the bike lane to its right is so poorly done I would assume it was the work of ODOT. Bike lanes as afterthoughts whose primary function is clearly to allow motorists to not have cyclists “in their way on their road” should be something that we left in the past long ago. Color me unimpressed with this effort.

Yes it is an “abomination” of an intersection due to a legacy 1940s/1980s ex-state highway (Fourth Plain used to be SR-501) meeting a 1999 state highway (Mill Plain new SR-501 with bike lanes and path) and a substandard county era rural now city industrial arterial.

The good news is that WSDoT’s upper leadership (based in the Puget Sound) saw the need to “improve” this intersection now for cyclists during a recent visit…and spurred the regional office to act – As I understand it. [Remember WSDoT was the first agency to adopt the NACTO bikeway guide.]

So think of the green paint as a a step toward a better future…perhaps a reconstructed intersection (roundabout?) once it is added to the City’s TIP…perhaps as part of the City’s Westside Mobility Study currently underway.

Send your letters and postcards to WSDOT (Lynn Peterson, “CEO” of WSDoT) and the City (Patrick Sweeney, Manager of the Westside Mobility Study) to help push the reconstruction of this intersection project higher up the list.

PS. Oh pleeeease, it is not “WashDOT”…its WSDOT.

[I do not see you write ODOT as “OREEEGUN DOT” in your press coverage for Oregon ;-0 ]

Ok Todd. I’ll change that. Didn’t know it was not appreciated by locals. no harm intended!

Those crossing angles are too sharp. The bike lane should cross the travel lane at 90º for maximum visibility.

JAT in Seattle
Reply to  Adam

Hmmm,… not sure I agree. Yes visibility is important, but in order to cross at 90 degrees the cyclists must come navigate two tight turns and come to a nearly full stop. not only does this encumber the road users we’re trying to facilitate, but in actual use it creates an ambiguity as to intention. The motorists whose previous task was to navigate in behind the smoothly traveling cyclists are now faced with determining of the nearly stopped cyclists are yielding or going.

Every road user should understand the absolute duty not to drive into the other road users in front of them.

So yes, visibility is important, but so is predictability. I know that “vehicular” has been recast as a dirty word, but infrastructure which encourages P.O.B. (pedestrians on bikes) behavior often creates unintentional ambiguity and marginalizes us.

Paul in the 'Couve

I’ve ridden that regularly for years. I guess it’s one of those things maybe I just got used to. But then I’ve was riding it before the current configuration and I have always had the habit of taking the lane, regardless what direction I was approaching from. What actually gets my attention a lot more is the 2 RR tracks about 1/4 mile further SE on Mill Plain (501). Heading NW this is down hill fast, into an oblique railroad crossing. I don’t know of anyone that has ever crashed on it, but it gets my full attention every time I ride it.

I was riding last week in Maribor, Slovenia. Riding on the bike lane I came to a busy intersection, they had lifted the road and dug some for a bike/pedestrian intersection right in the middle of the intersection. You never had to cross the road. I took pictures that will be on my blog soon.

This looks very dangerous. Why not grade separate the intersection? Have the bikes beside and crossing under the highway. Completely separate paths.

Ethan, there is a MUP running along the south side of the 501 in that area.

Yep…that was built as part of the 1999 MPX (Mill Plain Extension) Project.