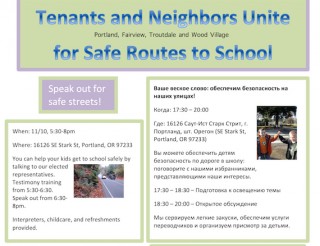 The flyer for the event was written in four languages.

Tonight in eastern Multnomah County an unusual cast of characters will gather to speak out in support of safer routes to school. I say unusual because biking and walking advocacy doesn’t often happen east of I-205.

The event tonight is being organized by the For Every Kid Coalition in partnership with the Community Alliance of Tenants.

This coalition is pressuring regional politicians and policymakers to dedicated more funding toward Safe Routes to School. Specifically, they want $15 million in federal “flexible funds” to go toward the program. The effort is one of the Bicycle Transportation Alliance’s five main advocacy campaigns that emerged after federal set-asides for the Safe Routes program have all but dried up.


The rally tonight will take place at the Rosewood Initiative, a community development organization located over three miles east of I-205. Here’s more about the event from a BTA press release:

… Multicultural community members and elected officials from East Portland, Gresham, Fairview, and Troutdale will discuss concerns around the disproportionately worse street-level safety and community health in their neighborhoods.

… Too many families in East Multnomah County don’t have the necessary safe infrastructure—sidewalks, crosswalks, and bike lanes—in their communities to support healthy activity for their families…

Community members who usually struggle to advocate for their children because of a language barrier will participate using translators speaking Spanish, Nepali, Karen, Vietnamese, Russian, and Burmese.

Part of the event will focus on empowering a broader segment of people in our region to speak up about this issue. There will be “Community testimony training” prior to a panel discussion and organizers say we can expect to see “passionate parents learning to advocate for the health and safety of their children.”

This event also highlights a growing effort by the BTA and other active transportation advocacy groups to expand their coalition beyond the usual suspects. The Community Alliance of Tenants, for instance, is a statewide tenant-rights organization that develops leadership skills for low-income renters so they can speak up against unfair treatment. We highlighted testimony from CAT’s leader Jusin Buri in a post last month.

Learn more about this effort at OurHealthyStreets.org.

I don’t live in Portland, but one east county concern resonates with me as a Vancouverite. I would like to see every candidate for Portland mayor take a long nighttime walk around the eastern perimeter of the city staying away from streets with sidewalks. Every man and woman that might want the gig should put themself in the position of pedestrian clay pigeon in the land of wide streets and drivers who can’t comprehend speed limit signs. Trial by ordeal? Just maybe–but someday there has to be a mayor who gets that sidewalks are needed everywhere, not just in the Pearl and close-in Southeast.

Thanks for your concern but you’ll never see that from Portland government. : (

I love the emphasis on empowering people to provide feedback and to speak up!

We had an issue on NE 172nd Ave in front of H.B. Lee Middle School, a 20mph Safe Routes to School street, where cars were consistently parking in the bike lane. There were also tamales being sold out of a truck in it after school on a near daily occurrence, which forced my returning 6 and 8 year old girls into the street with cars.

When my wife approached the staff about our concerns, the first response from the individual she engaged was “You what? You _bike_?” Further, the response to the ever-present tamale truck was essentially “Don’t you see the other cars parked in the bike lane too? What’s the problem? I don’t think it’s illegal.”

A very helpful Gresham Safe Routes to School representative (her name escapes me at the moment) was able to engage the school and provide some guidance, but the fact that there were individuals at a school, in front of a very nice Safe Routes to School backed project, that were completely insensitive to the safety situation in front of them highlights a gap in understanding.

It’s tempting to focus solely on infrastructure, so I’m pleased to see some consideration and emphasis on the outreach and education side as well.

For those of us who can’t afford a whole bunch of visibility gear, or just starting out, or (in my case) both, I appreciate this event.