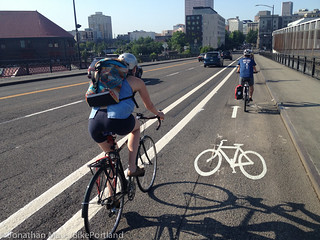 What’s it worth?
(Photo J. Maus/BikePortland)

How much is a bike lane worth?

As the City of Portland begins moving toward an overhaul of its auto parking policy, the people on two massive parking-reform stakeholder committees (one for the central city and one for neighborhood commercial districts) are beginning to confront an interesting problem.

If modern acolytes of market-priced street parking are correct, it’s actually not hard to discover the economic value of an on-street auto parking space: use meters or permits to raise the price of parking until 15 percent of spaces in a given area — about one per block — are always empty and available. It’s the curbside equivalent of a store that’s acquiring new inventory at the same rate that it sells its current stock.

But no such simple formula exists for calculating the value of something else that the City of Portland says it hopes one day to have on most of its major streets: protected bike lanes. And in the absence of such a measurement, some committee members worry that the city may be tumbling toward a system that would merely enshrine the city’s curbsides as places to park cars, though somewhat more expensively than before.

“All sorts of things could go where parking goes, and the city doesn’t really have a coherent policy as to when we choose to put parking there.”
— Grant Morehead, PBOT

“All sorts of things could go where parking goes,” Grant Morehead, the city’s lead staffer on the Centers and Corridors parking stakeholder committee, which is focusing on mixed-use neighborhoods like Hollywood and North Mississippi Avenue. “And the city doesn’t really have a coherent policy as to when we choose to put parking there.”

Mauricio Leclerc, Morehead’s counterpart on the new Central City parking stakeholder committee, said Thursday that the city needs to create an “objective measure” that could capture how important a given parking space is.

But he wasn’t sure how to create a similar measure to weigh that one against when it came to mobility such as a dedicated bike lane, bus lane, or turn lane.

Letting the market put a price on that parking space’s value would be one way to take such a measurement. But (at least until all vehicles, including bicycles, are charged a fraction of a cent for each roll of their wheels) no such pricing system is available for people biking on a street.

“How do we make that tradeoff?” Morehead asked stakeholders Thursday. “How do we determine when one mode is more important than another?” 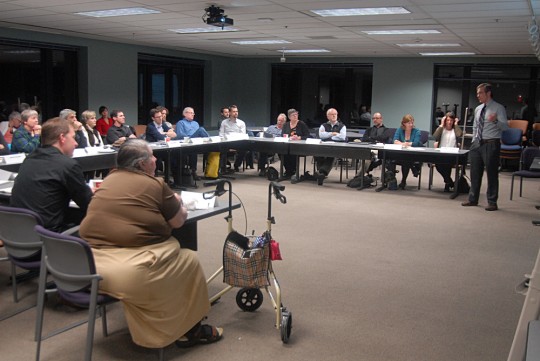 Those present talked intelligently about that and other issues, in large and small groups, for two hours. But no clear answer seemed to be emerging.

Ian Stude, chair of the Portland Bicycle Advisory Committee and a member of the Centers and Corridors committee, said a subgroup of bike-friendly committee members had met before Thursday’s meeting to compare notes and discuss what to ask for. He said they, too, had reached no clear conclusions.

“We mostly ended up talking about process,” Stude said.

Chris Smith, a city planning and sustainability commissioner also on the Centers and Corridors committee, asked Morehead if he thought Portland’s “green transportation hierarchy,” a pyramid that supposedly informs all decisions in the city’s transportation system plan, ought to apply. 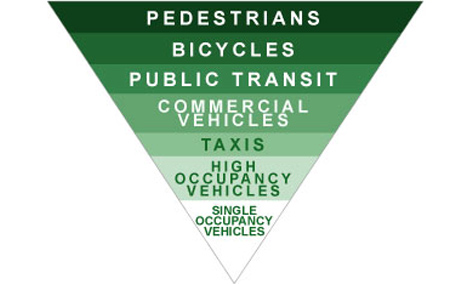 “Shouldn’t that inform this prioritization as well?” Smith asked.

As the meeting wrapped up, committee member Sean Green of the Laurelhurst Neighborhood Association told Morehead and Leclerc that he fears that unless the city moves to create some sort of system for evaluating the importance of any given bike lane, the economic value of on-street parking to local businesses and residents will always trump the citywide economic value that would be created by a complete network of direct all-ages bikeways.

Outside the building, Green said he was taking part in the year-long parking stakeholder process largely out of his frustration with the city’s decision last year to prioritize auto parking over any dedicated space for bikes on 28th Avenue.

“We were told that this process would be an answer to those problems,” he said.

The construction of a large number of curb extensions throughout the city has already ‘enshrined the city’s curbsides as places to park cars’.

Which is why we need a robust set of policies in place when we do the next streetscape….cough…cough…BELMONT.

Is a redesign of Belmont currently on the agenda?

If you look at the comprehensive map here:

If we make the same decisions on Belmont that were made on Division… well we see what that got us, the bioswales and curb extensions make a bikeway impossible to add later. This is VERY similar situation with a narrow street, commercial districts, parking on both sides and parallel greenways that are not …quite….close enough. These two projects should be done TOGETHER with integrated bikeway access to the commercial district all the way east to 45th. 45th then gives you a great northern route to Burnside, which then would take you east to as far as you want.

If this idea of bikeway access on Belmont appeals to you out there in cyberspace, PLEASE comment on the map as open comment period is only until March 13th.

To be fair, I don’t see them on main corridors, and bike corrals placed immediately “downstream” get a little extra security.

To digress just a bit on that note, I’m not aware of any street seats crashes, but what about bike corrals? The old ones are ringed by parking blocks. I’m not sure anything is on them anymore.

There are lots of curb extensions on Hawthorne, and I believe they’re on Division as well.

They’re also present on lower E Burnside where the city chose to install a standard width bike lane and a plethora of parking on both sides instead of using the extra space to buffer the lane.

I guess I’m not really understanding the question. Do we ask what the value of a travel lane (for cars, primarily) is?
Why is the $-value of travel (by bike) here being compared to the $-value of (car) storage? I thought Geller recently affirmed that the ‘make driving more difficult in this town’ part of the 2030 bike plan ‘hadn’t really happened yet.’

Yes, this needs to be a part of the discussion. On any of our multi-lane streets (say East 122nd), I’d rather remove two general travel lanes to create a bad ass bikeway than remove two parking lanes.

Why don’t we ask that very question: on any street with multiple lanes in each direction—especially on any segment signed as “NO PARKING”—what is the value of the outside lane? Is it more valuable as a travel lane or parking spaces? Why?

Maybe another question to ask is what is the value (to drivers) of having bicyclists in their own lanes instead of in travel (car) lanes?

The city needs to disassociate bike lanes from parking entirely. They’re trying to compare apples to oranges. A bike lane is a lane for travel, so its value should be infinitely more than that of any parking spot. A parking spot in front of a business is worthless if customers have no way to travel to the business in the first place.

Chris I
Reply to  Scott H

If travel lanes are “infinitely more valuable” then any calculation regarding street space allocation will always conclude that we should remove the street parking. We would have to remove all street parking throughout the city, for bikes and for cars.

“We would have to remove all street parking throughout the city, for bikes and for cars.”
Not really, since in a lot of situations there is actually enough right of way for both modes, and some on street parking (see SE 52nd). Building on the point that at least El Biciclero was making, and which I agree with, where multiple (auto) travel lanes exist we could/should think about reassigning the street width that is (already) dedicated to travel in a manner that reflects not only the present mode split but future, anticipated, hoped for mode split.

How do you value a life? Lack of on-street parking never killed anyone, but lack of infrastructure certainly has contributed to fatalities & injuries.

Have you seen 82nd? That street used to be 4 lanes + Parking (just like Hawthorne) but now, at 5 lanes with no on-street parking, it is no doubt a deadlier place.

um, why should private monopolization of public space, to the exclusion of all other use and users, for the storage of personal property ever take priority over public use. can i block off the whole sidewalk with a construction dumpster while i remodel my kitchen? what about fencing off a small section of laurelhurst park for most of august and september to accommodate my comfy outdoor furniture and swanky picnic galas?

I’d say you can fence off that section of Laurelhurst park indefinitely. There is a brown Chevy at the NE corner of NE Couch and 16th that has been parked in the same spot since I moved to the east side in October 2012. No joke, this car has not moved in a good 2.5 years. Who knows how long it was there before I moved to the east side and noticed it. I consider it a kind of field test as to how long private property can remain on a city street without moving. I think of this car every time someone on the east side complains about parking.

Situations like this are complaint driven. Call it into the city, someone will ticket it and a few days later it will be towed away. No one has bothered to call it in.

what good would that do? It won’t magically turn the curb side parking into a bike lane…

“How do we make that tradeoff?” Morehead asked stakeholders Thursday. “How do we determine when one mode is more important than another?”

One mode increases global warming, destroys paved streets, kills thousands of people either directly or via contributing to obesity and other unhealthy conditions, pollutes the air and requires massively taxpayer subsidized infrastructure. Another mode does none of those things and contributes to a safer, healthier, more livable community. I can’t say which is more ‘important,’ but one of them sure seems a lot more valuable to the community and worth supporting than the other.