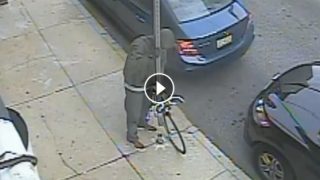 Out comes the pole, off goes the bike.
(Photo from WPVI-TV)

Bike theft is a national problem. I know we’ve focused on it quite a bit here in Portland, but I think it’s important to know that every major city is struggling with the issue.

As part of my daily grind I skim news headlines for bicycle-related items. One story that I think is worth sharing comes from WPVI-TV (ABC) in Philadelphia. I was struck by how it described such a similar situation to what we’re experiencing here in Portland.

What really amazed me was the video the news station shared. In it, a thief wearing a hoodie and gloves unscrews a sign pole, lifts it out of the ground, throws it on the sidewalk and cooly pedals away. All in just 30 seconds.

Check it out below…

Nabbing bikes that were locked to traffic sign poles has happened in Portland, but to see someone do this on video is jaw-dropping.

Makes me wonder how the City of Portland affixes its traffic signs to the sidewalk.

This underscores the need for cities to provide as much secure bicycle parking as possible. Often people lock up to sign poles because there’s no other parking around and/or existing parking is full.

They couldn’t ride away if the lock went through the rear wheel.

So many legit businesses in PDX have no bike parking staples or anything. I’ve not seen a single McDonalds with any … one of the many reasons I stopped going there. Nor do Red Robin or many, many, many others.

If I can’t lock up securely , I won’t go there. Don’t retailers understand that ?

Agreed that locking up so the bike won’t roll is a good idea but that video shows thieves lifting a street sign and loading the bike in a van, so that wouldn’t have stopped them. It also mentioned bait bikes and enforcement, and registering your bike!

My first thought as well. Two points of contact people, frame AND wheel!

My mini-U-lock is too small to fit wheel and frame.

Wheel and frame? Or wheel, frame AND STAPLE (etc)?

Anyway, my chits are on you being able to figure out a solution. 😉

How small? I have one of the smallest OnGuard U locks and it fits mine on round staples. Just have to go through the rear wheel and rear triangle (around your seat stay). It’s tight sometimes (which is actually a good thing (less leverage to break it)), but hasn’t not worked anywhere yet.

Made me chuckle that you stopped going to McDonalds and Red Robin because of the bike parking, not purely because the food is terrible and is laced with chemicals and hydrogenated oils.

Often I’ll take my bike inside with me. Sometimes I catch flack, sometimes I don’t. I’d rather have my bike close, than find it missing.

+1 on the locking through the rear wheel.

I think the guy “going green” should learn to stop riding the wrong way (into traffic).

Salmoning is a critical element of the environmentalist movement. I saw it on the news once.

More important than the bike, a personal security tip for Alex Rizzolo: the street going in the direction you want is just one block over.

I know that doesn’t please the respect-all-desires crowd, but whatever. The rivers and hills (never mind freeways and trains) don’t care. The turnaround from my one-way street that always seems to go the wrong way is usually the least of adjustments to make on any given ride.

That is why these poles are called “sucker poles” when set up by a thief for quick bike removal.

This “modern” sign pole design make sign replacement a breeze when motor vehicle operators run them over…just unbolt the remaining section and bolt a new one in – minutes vs. hours of work. No more pipe cutting and concrete work. Sadly the transition to this style of pole over the last 10 years has not been an improvement for bike parking security but the opposite. In the old days a thief had to make an effort to steal a bike locked to a sign pole.

What could be done is to either run a lock though the middle of the pole or the run a heavy bolt through and to either weld the nut or to bin the bolt over.

I always look to lock up to a natural gas line or an electrical conduit. Much easier to cut for the thief but…

In Amsterdam the bicycle theft is so bad the owner will lock there bicycle with two are more locks.

Vote Up0Vote Down
« Portland parking reformers puzzle over how to value bike lanes
Ask BikePortland: Is it legal to ride with my dog? »