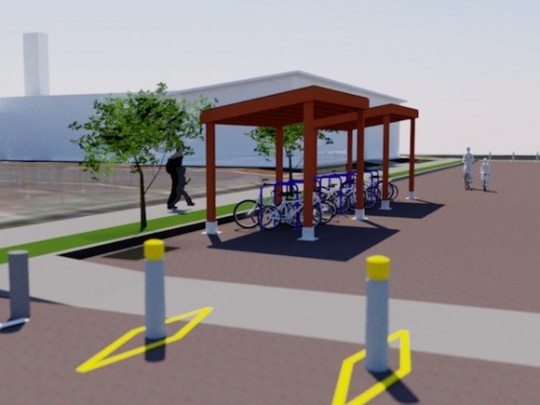 Delaware Avenue near Chief Joseph/Ockley Green School in Arbor Lodge is getting a facelift.
(Graphics by Fat Pencil Studio)

There’s probably no better place for a section of carfree street than between an elementary school and a park. That’s the situation on N Delaware Avenue between Bryant and Saratoga in the Arbor Lodge neighborhood. 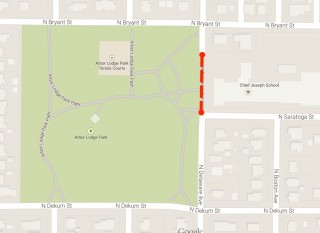 To use Bureau of Transportation parlance, Delaware is currently ‘vacated’ in that location. It’s nice to not have to worry about drivers and their cars, but the design of the closure leaves a lot to be desired. There are big, ugly barricades on the north end, and a chain strewn across the street on the other end. And bicycle access is difficult (you have to use busy sidewalks) because of high curbs and other obstacles blocking the street on both ends.

Here’s how it looks today from the north end (at Bryant): 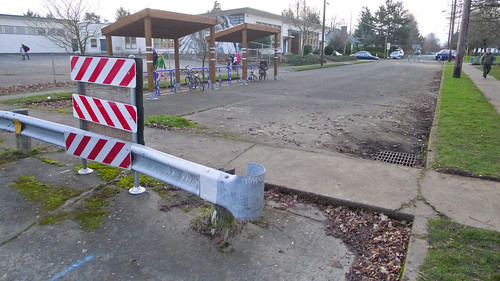 And here’s the south end (at Saratoga): 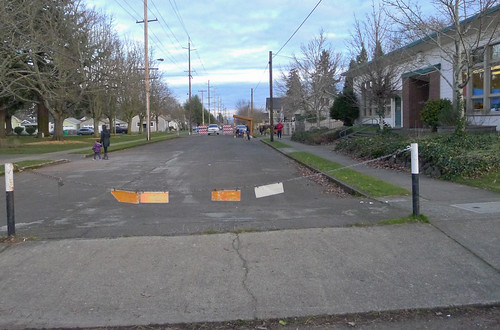 But now, thanks to a collaboration between the City, Portland Public Schools, and dedicated parent volunteers (who happen to know how to use some high-tech planning tools), this vacated street is getting a major facelift that will improve its looks and make it an easier to access by bike.

One of the school parents happens to be Joshua Cohen, the graphics and visualization expert who runs Fat Pencil Studio. You might recall his company’s work on the Williams Ave Project or the cool new Bridges of Portland poster they created.

This past summer, Cohen, who lives in the neighborhood, worked with a group of other parent volunteers to build two bike parking shelters on the street. They tapped into PBOT’s very cool, DIY school bike shelter program which gives parents all the information they need to plan, source, and construct them.

Putting the bike shelters in was the easy part. Cohen and other parents also wanted to remove the barricades and spruce up the north and south entryways to make bicycling easier and make the street a more attractive place to be.

Check out Cohen’s before and after images: 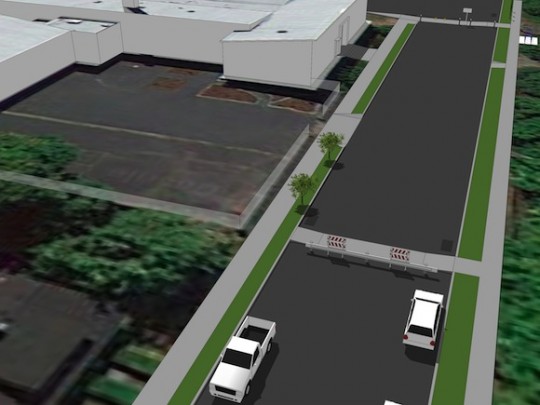 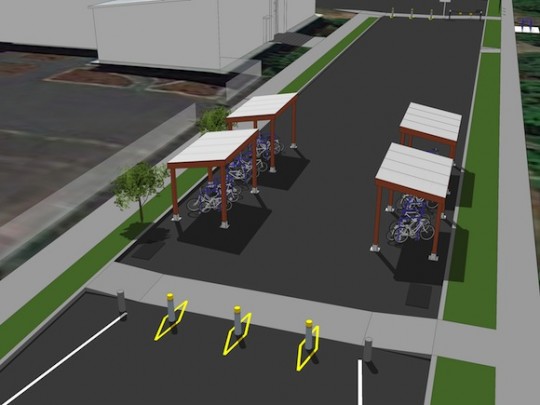 After he created a few visualizations and sent a few emails, Cohen got a meeting with the powers-that-be to discuss the plan. Here’s a snip from a write-up he published on the Fat Pencil blog:

“In theory, it seemed like it would be an easy plan to execute. In practice, building anything in the street (even a closed street) requires a lengthy process of consulting with multiple public agency folks. So in order to make communication as smooth as possible, I resorted to my usual approach of creating visuals and sharing them around. After a bunch of phone calls and emails, I found myself sitting in a conference room with representatives from Portland Public Schools, the Bureau of Transportation, and the Parks Bureau… and that’s where the magic happened. There were plenty of issues and concerns to discuss, and I was able to visualize most of them in real-time using a SketchUp model of the site. We were able to reach consensus, and the meeting concluded with a clear picture of the best option for moving forward.”

Gabriel Graff, the operations and safety manager at PBOT’s Active Transportation Division, said this project is a great example of how the agency has empowered parent volunteers to improve their schools. (Note that this project was complicated by the fact that the street is managed 50/50 by Portland Parks & Recreation and PBOT.) Graff also credits Portland Public Schools Project Manager Justin Fallon Dollard who, “figured out how to effectively harness PPS parent interest in bike shelters into deliverable and cost-effective projects.”

While two of the new bike shelters are already installed (and in daily use according to Cohen), PBOT has yet to embark on phase two, which will involve removing the barricades and improving bicycle access. Graff says they hope to complete the project by this spring.

Next time you’re in the neighborhood, roll on by and check it out. It’s a great example of what we can do with our streets and it shows how volunteers can successfully work with the City of Portland and PPS to do something positive for the community.

This is part of my commute and I am SO happy with the proposed changes. It is such an awkward place to ride through now, even though the road has already been closed. I can’t wait to see these changes implemented. Thank you Joshua and everyone who made this happen!

Wellington Park please! Our neighborhood does not even have east/west sidewalks! Biking or even waling my kids to our nearest park makes me feel like an irresponsible parent. oh, wait….this is neighborhood organized. OK; i’ll forward this great article to our neighborhood committee.

Thanks for the great write-up! One important point to add: The location of shelters 3 & 4 has not been finalized. Installing next to the park (as shown in the image above) would make a nice gateway, and provide easier access for visitors of Harper’s Playground.

However, the Parks Bureau has a different approvals process than Portland Public Schools, and it’s unclear if we will be able to comply with the requirements. If not, the fallback position is to install two more shelters on the East side of the street, in line with the two we’ve already built.

Our target date for installation is August 2015 (likely the 22nd or 29th). If you are interested in helping with construction, put a reminder on your calendar and contact me at the beginning of August: jcohen71 *at* gmail.

I should also give props to Justin Dollard who handled the approvals process and lots of work behind the scenes at PPS… and I was supported by a whole host of parent volunteers including Kerri Melda who secured the grant that paid for the materials, and Chris Rinehart who headed up the construction team.

Kind of a confusing headline, since there is an actual North Portland *Road* (which, by the way, features a really long separated bike path).

Ubiquitous. On every greenway: Concord, Michigan, Going, Ankeny, Clinton. Not just between schools and parks.

So stoked. The blocked connection in front of Chief Joseph combined with the sidewalk that dead-ends into the car parking space at the corner of N. Saratoga and N. Delaware here ( https://goo.gl/maps/rHOqt ) has long been a minor irritant.

It’s one of those things that always looked as if 20% extra effort would result in 200% greater result.

I couldn’t be happier about the proposed changes.

Will they make the north end at Bryant No Parking? There are double parked cars throughout the day and I’m always hesitant to pull through the intersection. Having No Parking would help the bike safety and traffic flow! This is a great improvement and we enjoy biking to Arbor Lodge Park, more bike parking is needed!

The west side – park side – is already a no parking zone.

It’s great to see a community devote some of their time to a good cause! Hopefully this blueprint is replicated citywide.

As a Chief Joe biking parent, I’m super excited and grateful to Josh and the others who worked hard on this proposal. Inspiring!

Joshua, do you have any photos of the completed project? Nice job on getting the wheels turning on THIS AND the Ockley Green project!