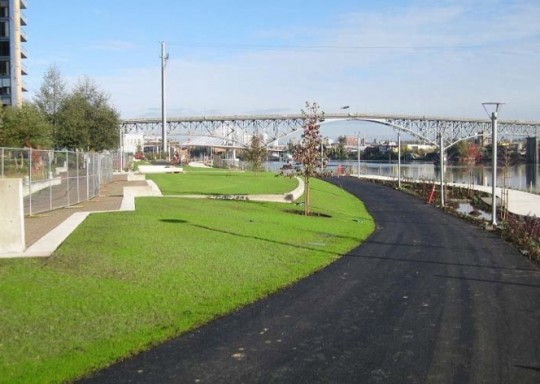 The path will run along the Willamette River from SW Lane to SW Gibbs Street. In a first for Portland, it will offer space for cycling and walking that’s physically separated by a row of vegetation. The $4.7 million needed for this phase of the project was paid for with System Development Charges via a City Council vote back in February. 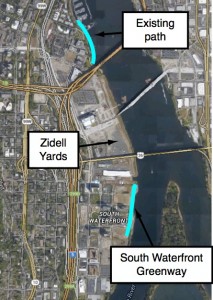 A new piece of riverfront trail is something to celebrate — especially in a such a growing and dense part of the city — but unfortunately we still lack a connected path. Even though Parks Commissioner Amanda Fritz has called it a “vital link for commuters,” this new path does not connect to existing sections of the path to the north or the south. These connections will have to wait for future real estate development projects (like the 33 acres owned by the Zidell family) that are in the works.

To share more about this project, PP&R is holding an informational meeting on November 18th at 6:00 pm at Umpqua Bank (3606 SW Bond). As for when we can ride the new path, that will have to wait until Spring 2015 when the official opening is planned once all the new vegetation has had a chance to establish itself.

It’s horrible! A disgrace! Connects to nothing! Worse than nothing! Portland sucks

These things are ever a work in progress… In urban planning tossing all the pieces across the room isnt an option.

You have to start somewhere before you can connect. Finally some high quality segregated bicycle infrastructure in a prime corridor. Much better than a multiuse path.

was carless
Reply to  Jim E

The good thing is that this waterfront will eventually connect! Hopefully we can get waterfront with adjacent dense development all the way to the Sellwood bridge. This could put a lot of pressure on Lake Oswego to allow the streetcar. Also, it would be great to see density discussions for places like Multnomah Village and along the Barbur corridor in SW. That area is ripe for development. It cant come with improving bike infrastructure as they build the Southwest corridor MAX (im hoping.)

We can make SW into an integrated hood with downtown.

But will the adjacent property owners be explicitly prohibited from blocking the path with gates or picnic tables or any other non-transportation use they spitefully decide to deploy because “salt the fields and poison the wells”?

I think this would be shooting themselves in the foot in terms of their development being desirable. If they want full value potential, they’d spruce up and connect their waterfront. Otherwise, I think the city should intervene.

Property owners of “High end” real estate often consider public access area on or adjacent to their property as a detracting because the public has access… this includes “undesirable” people.

Since they believe that they are also selling the hermetically sealed affluent white fantasy land it is important to profit margins that this delusion not be popped by “different” people being too close.
See “gated communities”.

Interesting. I almost biked back that way last week on my commute to check out the area. Glad to know it will be a bike area in the future. It will be awesome if it actual gets connected at some point.

4.7 million?!?!?! This took so long to build and cost so much, someone was getting some kick backs on this project.

We can’t even get to the bottom of our governor’s shady activities. The back room dealings in this city must really be bad.

Most of this cost was environmental restoration of the river shoreline and the construction of native habitats. The actual cost of the path was a small percentage of the project. It would be good for public relations to determine what percentage.

But of course, everyone will only see $4.7 million spent on a bikepath that goes to nowhere! I’m sure the Oregonian will have a field day.

If the 4.7 million is the cost of materials and installation of asphalt then something is fishy, but before accusing “someone” of criminal maleficence one must be confident of the scope of work covered by that cost. Does it include permitting and planning? Geotechnical enquiry and engineering? Archeological inquiry? Removal and legal disposal of tainted soil and import of topsoil? Public art and landscape architecture? How about shoreline reinforcement and restoration? I suspect that the pedestrian path and landscaping are also included in that cost. I am (apparently almost) as big a cynic as anyone, but when nice stuff is built with private money for public consumption I hold back in flaming it until I know all the facts.

Of course we can thank Critical Mass for the public policy that shoreline development include a greenway trail link.

Provide your proof to the Attorney General.

Restoration of the old industrial riverbank is the big story here, not the paths. Cleaning this up after 150 years of neglect and abuse is very expensive. As Zidell and OHSU are built out, the paths will connect to Waterfront Park, but that will take some time. Zidell is still doing very well building barges down there.
Note: Daimler has opened a temporary connection along the river between the two Willamette Greenway Trail sections north and south of their new HQ project. It is open to the public and will be built out to current standards as part of that project. The “POC Gap” is gone on Swan Island!

I would suggest someone at bikeportland or Willamette Week look into the over $10 million spent on this project that was over budget. Parks is not a well run bureau. Developers were willing to put this portion of the greenway together without Parks, but Parks made it a priority to take the money and run. Someone should really look into this one…