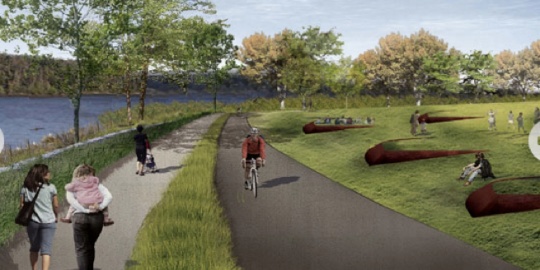 With funding just approved, this should be a reality by November.

The South Waterfront Greenway project got a much-needed boost from Portland City Council yesterday when commissioners voted to fund Phase 2 with $4.7 million from their System Development Charges account. The unanimous 4-0 vote (Mayor Hales was absent) came after a frank debate between Commissioner Novick, who voiced objections to the expenditure to former Parks & Recreation Commissioner Nick Fish and current Parks Commissioner Amanda Fritz.

With budget season in full force, Novick voiced concerns over yet another capital project moving forward without any funds earmarked specifically for ongoing operations and maintenance. Council was made aware by project staff that the annual maintenance tab for the greenway — which will like come out of the City’s highly competitive General Fund — would be nearly $500,000. Novick ultimately relented with his objections and he made it clear he liked the project. “I just think it’s really unfortunate,” he said, “that the money for maintenance wasn’t built into budget targets as soon as it was approved.”

This path project has been planned for about 12 years. The ultimate vision is to connect it with the existing riverfront path that goes from the Sellwood Bridge to SW Bancroft Street. The “Central District” segment Parks is working on now, a quarter-mile section roughly between SW Gibbs and SW Lane, has proven to be much more expensive to build to due significant environmental clean-up and river habitat restoration also included in the project.

As we’ve reported in the past, the bikeway planned for this path will be higher quality than existing waterfront paths because it will be physically separated from the walking path.

At the Council meeting yesterday, the Commissioners (led by Fritz) spoke glowingly about the what this project will mean to Portland. “Not only is it a way to connect to nature in the heart of our city,” said Fritz, “it is a vital link for commuters, an improvement for our quality of life, and a promise kept to the people of Portland living in what will be the state’s most densely populated neighborhood.” Commissioner Saltzman said finishing this Central District section is key in order to “get people excited about the other sections and keep the dream alive.”

While commissioners were upbeat about the path itself, this vote likely sets up more Council debates in the future over how to pay for operations and maintenance in a bureau that already claims to have a $450 million maintenance backlog.

Phase 1 of this project has cost the City nearly $11 million. Work on Phase 2 is expected to begin this April and be completed by November 2014.

Learn more about this project on the City’s website.

So what entails the $500,000 needed for yearly maintenance of this tract? Landscaping? Pavement resurfacing?

I can’t figure out if this new allocation goes to the Gibbs-Lane segment, extends the trail southward, or something else. Can you clarify what Phase 2 includes?

Phase 2 is in fact the upland work for the Gibbs-Lane segment.

How does a bike path require half a million dollars to maintain itself a year? Does it only allow street sweepers made demo diamond-encrusted gold plate if something? Can somebody please explain this to me???

The greenway is more than the ribbon of pavement used by cyclists, it is the linear park, in this case two ribbons of pavement surrounded by native and ornamental plantings and irrigation. Native plants establish more slowly than exotics, so weeding will be ongoing. Near the river herbicides are mostly prohibited so lots of hand work will be required to establish the landscaping. Linear park will have trash receptacles, benches, drinking fountains, public art and other site amenities. There is vandalism, misuse and general wear. Addressing these issues is where the maintenance dollars will go.

We should applaud the city for budgeting the maintenance. The historic model is to build stuff then ignore it as it deteriorates.

Agreed. You have no argument from me that this is worth it. The only problem is that I can already see the Oregonian editorial being written about the high cost of bike “paths”. Clearly, there is a “parks” component to the maintenance, and another, far smaller, transport corridor component. I wish they were sensibly broken down and reported. I further wish that the media in this town could be responsible enough to figure this out on their own, but that’s just not possible with the current ownership of our not-quite-daily-anymore newspaper.

Sure, that’s what I figured was included in Maintenance. But $500,000? Say they have two full time employees just dedicated to this stretch for $75k a year, that’ still another $350,000 left over.

I applaud Steve Novick for calling out one of the City’s worst bad habits: the failure to budget for maintenance. In my many years working there, I saw this happen several times: sexy, shiny, even innovative projects passed with a utter denial about ongoing costs–especially for landscape-related maintenance. This sounds like a stellar project. I hope they get it right.

And what are those big brown divot-looking things in the rendering??

And what are those big brown divot-looking things in the rendering??
Recommended 0

Considering other design features in that neighborhood my guess is that these are weathering-steel panels that form flat perches on the slope. The MAX bridges are “Corten” steel as are features in the stormwater treatment under the aerial tram. It is designerly to repeat the theme of a common material.

This will be most excellent. Perhaps volunteers can help with planting and habitat maintenance. I’d be happy to.

Are there any plans to connect with the Willamette Greenway behind Benz Springs? It seems like a very short section of paving that’s missing – http://goo.gl/maps/HWcfn

I’ll admit, I don’t know the full slate of projects (funded and unfunded) across the city, but this looks like another central city (and in this case westside) shiny new park/path/etc.

I would guess the far eastsiders will be hating it… I would if my part of town was getting neglected.

ICYMI on Bike Portland two days ago (http://bikeportland.org/2014/02/04/new-parks-will-improve-bicycling-in-east-portland-100817), the City of Portland just announced two new parks east of 82nd, at a cost of $12 million.

Elizabeth Caruthers park cost $4 million to build, which leaves at least $7.19 left from what that neighborhood has paid. Is it totally unreasonable to spend $4.7 of that on riverfront restoration?

…don’t forget the cost over-runs on the aerial tram, the cost of extending streetcar, utilities, streets, sidewalks and decorative lighting. All of which as Novick rightfully points out with parks, cost money to maintain. If we showered this much capital on other parts of the city, they too would soon sprout shiny new luxury condos. What we have here is a few developers have basically created a private gated community only without the gates.

I’m all for a continuation of the waterfront system, but sick of hearing about the preferential treatment for the SoWa neighborhood. We have more pressing needs.

None of which were paid for with parks money. The full cost set of SDCs run to ten of thousands of dollars *per unit*. The PBOT fee, for instance, is $2,005.

And yes, parks cost money to maintain. But each of those condo towers is paying over a $1 million in property taxes every year. Also, the operational costs of the aerial tram are mostly paid for by OHSU, not by the City.

I would love to see a breakdown of the maintenance costs of this linear park at $500,000 a year.

Any updates on the segment thru the new OHSU campus and Zidell property? There will be a gap at the barge facility for as long as it turns out product, but what about the rest up to the existing trail under the Marquam Bridge?

Keeping the city’s largest employer and only big league research institution thriving is well worth the public investment in SoWa.