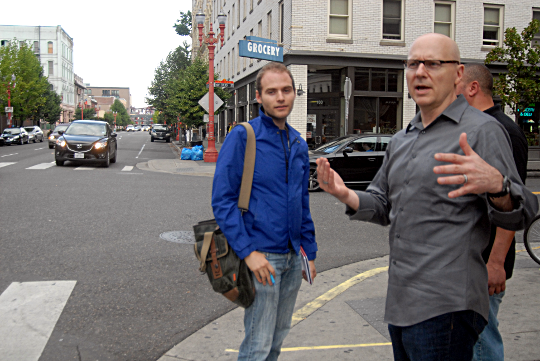 The Portland Business Alliance and the city’s fire, police and transportation bureaus have all signed off on the plan, which will run from 7 a.m. on Friday, Oct. 3 until Sunday, Oct. 5.

“We’re starting to build planters this weekend,” said Boris Kaganovich, an organizer of the project for the group Better Block PDX, the volunteer group that has partnered with the Old Town Hospitality Association and Old Town Community Association to do the project. “I’ve built the first two prototypes. Now we’ve just got to build 150 more.” 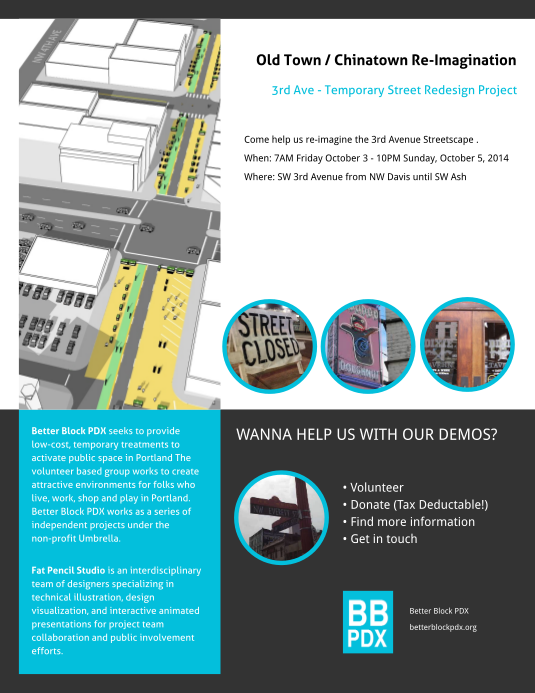 A Better Block rendering and promotional flyer. (Click for a PDF.)

It’s by far the biggest undertaking to date by Better Block, the all-volunteer nonprofit group that last year created a spectacular PARK(ing) Day on Southwest Stark and a temporary “Popcorn Plaza” this spring on Southeast Clinton Street.

Dan Lenzen, owner of the Dixie Tavern and a leader in the hospitality association, said in an interview Thursday that the demo is going to be “awesome.”

“It seems to be a pivotal opportunity for many people — businesses, residents, tourists and visitors — to look to see what it could look like with this change, how it might be able to positively affect the neighborhood on a broader scale,” Lenzen said. “It could be the catalyst for us to look at 3rd and 2nd and 4th street management changes.” 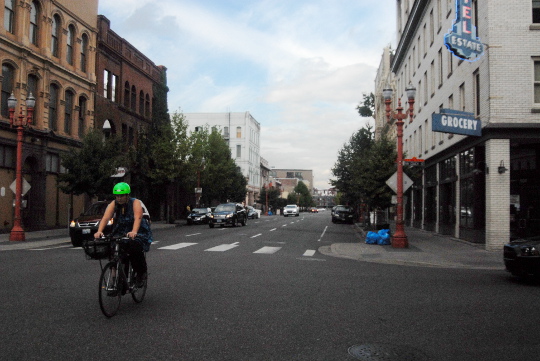 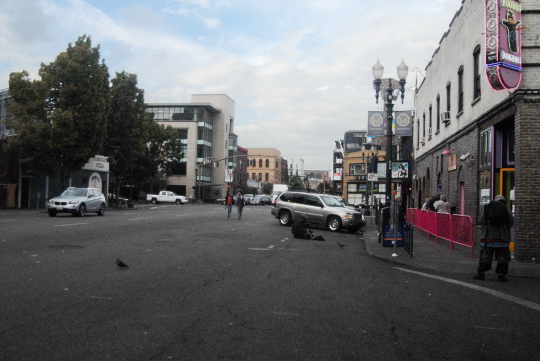 Standing at 3rd and Couch Thursday with Lenzen and Dixie Tavern manager Jeff Hebert, Kaganovich said the weekend demo would be a way to explain the benefits of changing 3rd Avenue that’d be more memorable and intuitive than Photoshop visualizations.

Better Block recruited Nick Falbo of Alta Planning + Design and Adrienne Leverette and Yelena Prusakova of Fat Pencil Studio for pro bono planning support. Lenzen and Kaganovich are also recruiting businesses along 3rd to move tables and chairs into the street, where Kaganovich said businesses will be allowed to offer food service even though non-customers will also be allowed to sit there during the event.

“It’s going to be privately owned furniture, but public seating,” he said. 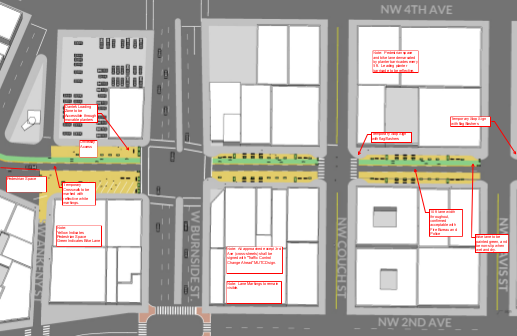 A detailed draft site plan by Better Block. (Click for a PDF.)

Lenzen said he’ll be on site during the demo to organize any necessary changes.

“It’s flexible, that’s the beauty of this thing,” Lenzen said. “If it’s not working one way, let’s try another way. If we don’t have enough tables out one day, let’s get some more out the next day.”

“Because it’s temporary, no one has any objections.”
— Boris Kaganovich, Better Block PDX

“Because it’s temporary, no one has any objections,” he said. “We have a chance to get a bunch of stuff wrong and we can fix it in another round.”

Kaganovich, whose own day job is as a communications engineer for TriMet, credited the city for being responsive and open to the idea once he and Better Block’s other organizers figured out which city employees they needed to talk to.

“What’s amazing about Portland is that more than anywhere in the U.S. right now, I think, you can basically pick up a phone and talk to any city staffer,” he said.

That’s turned out to be great news for the Old Town business group.

“They’ve been trying to get the city to do this for a really long time,” Kaganovich said. “And we said, hey, we can do this in a month and change. And everyone’s eyes got really wide. … We couldn’t say no, given that all the stars seemed to line up.”

Better Block’s core team is meeting today to discuss plans for recruiting volunteers and soliciting enough donations for the project, whose cost they estimate at $5,000 to $6,000. If you’d like to help make this project happen, you can donate online to support the effort or email Kaganovich, kaga0008@gmail.com, for details on how to volunteer.

And as a heavy user of 3rd, naturally it is on a weekend when I’m out of town.

Bummer. But I’ll edit the post to note that all of this starts at 7 am on Friday.

Sweet, just in time for me to hop on the MAX…

Amazing! is what great advocacy looks like. Thank you. cc:@btaoregon.

Cool, good to see businesses taking the lead in reclaiming these empty car lanes as public space. I’m looking forward to enjoying some quality time in Old Town that weekend.

I’m thoroughly impressed. This group isn’t talking about doing it.
They are demonstrating how to get it done!

Other organizations should maybe pay attention.

This sounds amazing! The section of 3rd Ave in front of Voodoo Doughnuts is particularly overdue for some pedestrian TLC. The street is so wide there – unnecessarily so – and it is a very uncomfortable place to cross.

Given that Portland’s practically #3 tourist destination (Voodoo) is right there on the block, you would think the City would be more interested in making it a ped-friendly place.

I would like to see a nice plaza there, where people can enjoy their doughnuts!

Also, I agree with other posters about leading by example.

Alberta Streetfair’s transition to being carfree only happened because people shut it down one evening, everybody saw that the world did not end when that happened, and that in turn paved the way for it to become a legal closure.

The SW Ankeny Alleyway – same thing. Towards Carfree Cities made it carfree for one weekend a few year’s back – and the businesses on SW Ankeny liked it so much, they pushed for it to become permanent. Which it now is!!

Voo Doo has already been in talks with PBOT for that block, and has a draft sketch and estimate.

You might want to check with the local residents around Alberta before declaring it a complete success. And you might want to find out how much it costs taxpayers for the traffic management and police presence.

I don’t want to get drawn into a debate about the pros and cons of street fairs.

I’m just saying, there was no way Alberta Street was EVER going to get closed for the event to motor traffic if it was a PBOT-orchastrated affair. It took the work of citizen activists for the street closure to happen.

This is awesome. We need more projects like this in Portland.

Hats off to the DIY spirit and best of luck to all involved!

This is awesome!! Better Block people, do you need help? Maybe BikeLoudPDX can lend a hand….

Email me at bikeloudpdx@gmail.com if so!

Ooops, just saw contact info at the bottom of the article. Reading, bah….

This is the perfect storm that PBOT repeatedly says they require to do anything transformative on our major streets:

Let’s hope with all of these barriers knocked down, we can do something great on 3rd ave permanently. Kudos to BB PDX and all the great folks working to make this happen behind the scenes.

Kudos to the city officials involved for not automatically being opposed to the experiment. Rather than saying “It’s different, so NO,” they seem to be open to the idea of a trial run. Once it’s up and running, sometimes the preconceived ideas of those that are fearful of removing car traffic magically don’t match with reality.

Weekend traffic may not be the same as weekday. The southbound PM peak has 400 vehicles per hour going through or right and 200+ making a left turn. Add in some pedestrians on Burnside and 3rd gets backed up for several blocks without a southbound left turn lane. It will be interesting to see what the auto traffic is like with the restrictions in place. Hope there’s no events downtown.

Yes, but why should we prioritize that (traffic) over other great outcomes?

This is awesome. Assuming this is successful, I wonder if the PDC would be willing to pay for a permanent redesign of the street? NW 3rd is in the River District URA (http://www.pdc.us/Libraries/River_District/River_District_URA_Boundary_Map_pdf.sflb.ashx), which is apparently flush with cash due to the incredible success of the Pearl. I don’t think the Pearl is in need of much public money any more, but Old Town certainly is.

That would be a good use of PDC money!
Subsidizing new construction is a fools errand in a city with high demand for housing and supply limited by regulations.
Building better public infrastructure, especially plazas that reduce car traffic and improve local commerce, is a much better investment.

There are certainly a lot of plans for that PDC money. Lenzen has his own, though I don’t know much about the details of PDC’s funding pots. As I understand it, he’s hoping to combine PDC support for his business with a bank loan and cash he’s saved up to do some sort of remodel to make his business more street-facing and profitable during the day instead of mostly just a nightclub thing. (I hope that is all accurate – I’m hazy on the details.) That’s a big reason he supports the idea of making 2nd and 3rd less traffic-oriented and more human-oriented. Not that there’s anything wrong with that!

Getting more daytime visitors is crucial to the success of the area. It must be one of the few parts of the city that feels safer at night-due to all the visitors to the bars-than it does during the day.

I’m not sure. Email Lenzen and let us know! danl@venturehre.com

I like it!!! And I will be in Portland that weekend to drop in and check it out.

That is cool. I will be there, spending money!

Citizens once again showing just how ineffective our current city leadership really is.

Any one like me thinking abouthow a “Breakfast OFF the Bridges” event on Friday morning to kickstart the Reimagination would be great. Lots of space outside Voodoo to gather!

The strip club at SW 3rd and Burnside needs to be bulldozed, new crosswalks made, and a park added.

Why? That should be a really tall apartment tower with ground floor retail. It’s in downtown! We need more density, not less.

We need less density, not more.

No way, there are more parks than the City can handle right now – particularly downtown. Demolishing buildings is a waste of a structure and existing ground level activities unless it’s going to be immediately replaced with a new, hopefully more dense, development.

Less? Nah. We need to maintain the UGB to preserve the surrounding ecosystem and increase the amenities in the city. That means more density– build up, not out. No sprawl.

This is a beautiful project.

Forget the car normativity. This is not a street shut down. We need more streets opened up like this.