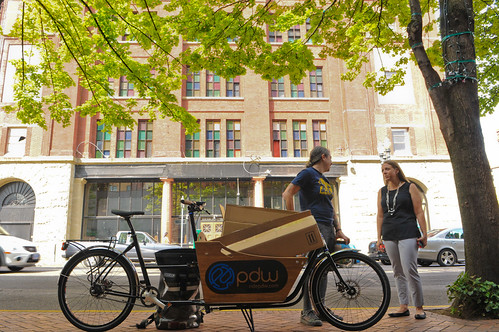 Hazel Gross and her company vehicle chatting with a customer on SW 2nd Ave.
(Photos by J. Maus/BikePortland)

Yesterday I took a short ride downtown and it was the perfect illustration of something I’ve known for many years: cycling in a city where a (relatively) significant amount of people ride bikes can* be a very social form of transportation.

I realize this isn’t a revolutionary concept: The anonymous and isolating nature of driving (and the opposite characteristic of cycling) is something urban planners have understood for a long time. And it’s not new to me (or you, I assume) either. In fact, running into people I know, and having quick conversations while moving through the city on my bike is something that happens all the time.

On that short ride yesterday — from our office on SW 4th (between Stark and Oak) to observe and photograph some new bike lanes on SW Salmon near Naito Parkway — I ran into three different people I knew. With each person, I was able to easily pull over for a quick chat. It was nice.

I’m not an urban planner; but I understand enough about cities to know that face-to-face interactions are one of the key ingredients to making them great. When people stop on the sidewalk or in the margins of streets and talk to each other, it creates sort of a temporary public space that was previously used only as a pass-through corridor.

When we think about the benefits of bicycling, we usually think of health, the environment, economics, and so on. But we shouldn’t forget its important social impacts.

Hazel Gross was making a delivery on her cargo bike. 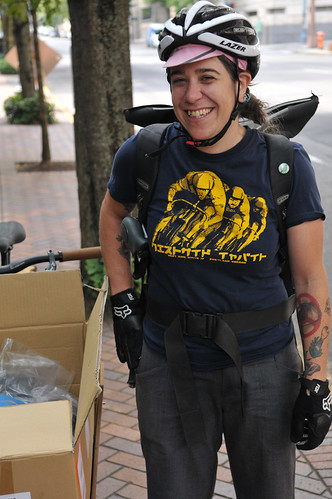 Hazel works with Portland Design Works, a nationally distributed bike part designer based in north Portland. She was out and about making deliveries to local bike shops with the company vehicle: a Portland-made Metrofiets cargo bike. In addition to bringing orders to PDW customers, Hazel was also on a special mission to Stumptown Coffee. “We’re trading [PDW products] with them for coffee,” she told me, “They’re using it as prizes for employees doing the Bike Commute Challenge.”

On the next block, David Aulwes rolled up next to me. 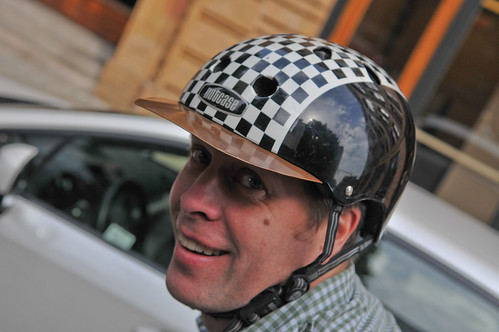 The first thing I noticed about David was the cool visor on his helmet. Is that a new option from Nutcase? I asked. “No, this is custom-made,” David replied proudly. On closer inspection (at a red light) I noticed the visor was made out of copper. Very nice. David, who I used to know from his work on the City’s Pedestrian Advisory Committee, now works at TriMet as a Senior Transit Corridor Designer. Michael and I will probably be in touch with him for insights into future stories on topics like Metro’s SW Corridor and Powell-Division Transit Corridor plans.

After parting ways with David, on the next block I noticed Simon Kirsch in the crosswalk. 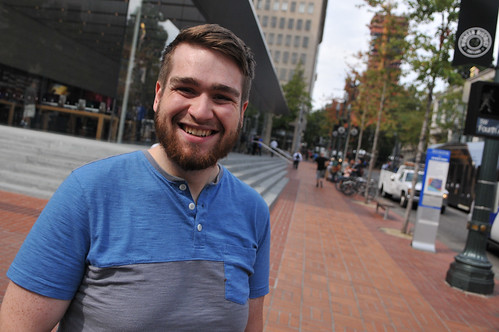 Simon is a business specialist at the downtown Apple Store (and a loyal BikePortlander, thanks Simon!). I met him a few weeks ago after he asked me to be a part of an event at the store. Yesterday I caught him on his lunch break and we chatted for a few minutes about iPhone pricing plans and how crazy the store would be when the new iPhones go on sale (hopefully, he’s survived the onslaught).

I’m thinking of making weekly rides around downtown a regular thing. I’ll bring along my camera and capture what — and who — I come across. And by the way, thanks for reading and commenting on all our stories this week. It’s been busy around here and we appreciate your time and attention.

*I say cycling can be very social, because there’s a wide range of biking styles. Some people ride hunched over, focused, and fast; while others ride more slowly and upright. I happen to ride a completely upright bike. I also ride slowly and I’m always scanning around with my eyes — not just to stay safe, but to see things (like people and other reasons to stop).

Bumping randomly into people you know is like seeing a rainbow, and it happens every day (not exaggerating) on my bike.

But I also like regular sightings of people I don’t know (by name). For example we pass the same 5 people every day who are walking across the Hawthorne bridge in the opposite direction. I don’t know bupkiss about them but sometimes they smile at us which is nice.

Yesterday we stopped to get cash at an ATM and the bank guard — who did not look familiar to me — said “I see you guys almost every day on the way to work. It really makes my morning.”

Not once ever has someone said seeing us in the minivan makes their morning.

And FWIW I’m probably one of those hunched over riders, although having one or more kids in tow does kind of slow me down.

I don’t know about that copper visor. Isn’t it kind of a blade aimed at his forehead?

Living on the edge! (it is a slip fit with a wide bend that goes between the shell and foam, hopefully it just pops out if I go down!) I will let Jonathan get a picture of my nasty scar if all goes to hell!

I’m an upright rider who is on the timid side, so I ride a little slower, and I tend to notice my surroundings in a slightly more social way (along with the don’twannadiedon’twannadie way). I haven’t bumped into many people I know while I ride yet, but I have had a number of conversations as I start and finish my rides because of my bike. Having an unusual bike helps (green Townie), and having decorated the basket makes it stand out a little more as well, and that all invites comments & conversation that might not have otherwise happened.

Shouldn’t take too long to run into a B-line Trike!

John Liu
I don’t know about that copper visor. Isn’t it kind of a blade aimed at his forehead?
Recommended 0

yeah, I crashed once, with a ballcap under my helmet. The brim hit the sidewalk first and gouged deep back into my forehead. I would say that copper visor, though snazzy looking, is not too smart.