Starting tonight, a 12-block section of downtown Portland will be off-limits to cars two nights a week.

It’s part of an effort from Mayor Ted Wheeler’s office to improve safety and reduce gun violence in Old Town Chinatown’s entertainment district. Wheeler hosted a press conference Tuesday at Kells Irish Pub to announce the plan. “As we emerge out from the pandemic, the crowds in Old Town have returned by the tens-of-thousands. The streets are jamming up — particularly on weekends — and people need more room to spread out,” Wheeler said. “We need bigger sidewalks. We need more room for pedestrians. In lieu of that, we’re going to close lanes and streets to give people the elbow room they need to move around more freely and enjoy themselves.”

If this sounds like deja-vu, that’s because the City of Portland first made the connection between crime and cars in this area in 2009 and then expanded it further in 2012 at the behest of former Mayor Sam Adams. Last summer, Adams found himself working on the issue again as a top Wheeler advisor. According to The Oregonian, when the carfree zone and added security detail lapsed during the pandemic, safety in Old Town plummeted. After a back-and-forth with the transportation bureau and local business owners over permitting of barricades to prevent the violence, a temporary solution was found.

Wheeler’s announcement this week marks a more permanent solution to the ongoing concerns.

The new entertainment district will be twice the size of the previous version. Wheeler has given authority to the Portland Police Bureau to ban vehicles between NW 1st Avenue and NW 5th Avenue and West Burnside to NW Everett on Friday and Saturday evenings. The carfree zone will likely be in effect from around 9:00 pm to 3:00 am (I haven’t heard back on requests to clarify the exact times).

In addition to not allowing vehicles into this 12-block area, Wheeler said the PPB will deploy a “small” team of officers to patrol the area and will install additional lighting. It also “builds upon work to remove problematic encampments that block the right-of-way,” Wheeler said Tuesday. They also hope the new carfree zone will encourage people to ride transit into the area instead of driving.

Missing from the story so far is any word of involvement from City Commissioner Jo Ann Hardesty, who oversees the Portland Bureau of Transportation. The effort seems to perfectly align with several of her top priorities, including the use of street-based interventions to reduce gun violence and the creation of carfree zones downtown.

Back in July, Wheeler’s office validated some aspects of Hardesty’s approach to street-related violence when he announced a new gun violence reduction plan. His new plan also echoes an approach endorsed by the Old Town Community Association in September 2021 to do more public space activations of streets and sidewalks in the area.

Previous iterations of the entertainment district did not allow bicycle riders through the zone. Now that it’s twice as large, and would impact major cycling routes like SW 3rd and 4th avenues, we’re curious if bike traffic will be permitted. We’ve reached out to Hardesty and Wheeler’s office to find out more and have yet to hear back.

As far as encouraging people to ride transit to the area – I love the initiative but don’t think it’s going to play out in practice. After the pandemic and labor related cuts, transit service is spotty at best after 9pm and impossible if you want to stay out past midnight. I’d really like to see MAX and some of the busier bus lines run at least every 20 minutes late into Friday and Saturday nights. I understand that TriMet is having difficulty with their operator shortage but most folks won’t use unreliable and infrequent transit unless they’ve gone down the low-car/carfree rabbit hole far enough to comment on the bike website on their lunch breaks looks at reflection in disgust

Overall, this is a step in the right direction and I think we should celebrate it despite the shortcomings and ambiguities.

I know we should all be grateful for the many small but positive baby steps the city government is attempting in trying to curb current gun violence, but a far more substantial experiment would be to essentially close off a whole district such as Uptown or the Pearl, allowing for free transit and bike access but cars only along certain well-marked and heavily controlled corridors.

Strong agreement here, as someone who is very (too?) far down the car-free rabbit hole the lack of night transit service is so glaring and hamstrings the network pretty badly. For all the advertising emphasis TriMet puts on “frequent service” they seem to act like anyone out after 10pm doesn’t matter. I don’t think a single “frequent service” route runs anything close to 15 minute headways at night. The FX is cool, but only nine total buses running after 10pm is so bad. Hard to convince your friends to take transit downtown if there’s a really strong chance of missing the last bus/train if you stay out an extra half hour.

Even just having to wait a long time sucks. I think most folks’ upper limit is 10 minutes so if they look at their phone and see they’re gonna have to wait 25 minutes for the next train that’s probably the last time they take transit on a night out. I believe you could also make an equity argument here as well, as people who work low-wage jobs often work odd hours, and are more likely to depend on transit. They deserve frequent bendy busses just as much as the yuppies *** Moderator: cut last phrase, derogatory ***

I really hope that Trimet can sort out retention of current drivers and recruiting/hiring/training new ones.

Hopefully once it turns out to be a success (I’m hopeful it will) that it’ll get expanded to other hours, other days of the week, and even other areas of town.

I think this is probably a good move, but it would be nice if it was possible to cycle through the area. It’s pretty hard to get to the southern part of the Pearl or Northwest from the Steel or Burnside bridges without going through this part of Old Town. When the crossing of Naito at Flanders is built that will help, but who knows when that will be.

Yeah it’s annoying that they’d announce this and not make it clear if bikes can get through or mention what time the closure will be in place. I still haven’t heard back from their offices but I will update the post when I do.

This isn’t a step forward for car free districts. I’m old enough to have seen this before. This is strictly about the chaos in old town-not any new commitment to car-freeness. Portland just doesn’t have the population density to support what people on this blog (including me) want as far as a car free world.

Also when you include the vast suburbs (check out the Census Bureau’s definition of the combined statistical area of commuting relatedness) you simply will not find any businesses that will support making potential suburban customers walk more than a few blocks.

Many newer Portlanders tend to ignore either willfully or not, the suburbs. Back in the day Portland proper people were just regular folks not hipsters. Suburbanites regularly went into the city and helped create what it is today. Part of what made downtown so accessible to suburban customers were the smart park garages for drivers.

I’m a Clackamas suburb kid–we matter. Us going into Satyricon, Powells, X-Ray, The City nightclub and the Quest created the Portlandia scene. Dandy Warhols–Beaverton. Bob’s Redmill which I’m currently discovering is all over Thailand–Milwaukie. Netflix even made a TV show about kids from Clackamas in the 90s–implying we were the original cool kids in Portland. You’re welcome

PTB
Reply to  donel a courtney

Those of us from Clark County disagree.

I assume we’ll shortly see all the commenters who brigaded the posts about Hardesty’s Mt. Scott-Arleta project ranting about how this is “just traffic barrels” and “do something real lol”

Actually I see this as equally worthless. People who want to commit gun violence will do it regardless their mode of transportation.

Middle of the Road Guy
Reply to  Matt

Nobody wants to address the root cause.

Can we get a carfree zone on SE Oak between SE 37th and Cesar Chavez next?

I live in this zone. I bike here daily. When streets were “closed” this summer, they were often closed to people on bikes. The barriers, ironically, are often giant cars. I hope this changes. 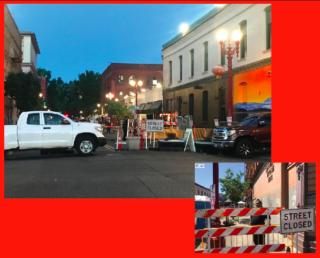 If the goal is to make the streets into one large pedestrian zone/district for throngs of intoxicated bar hoppers, it makes sense not to have cyclists riding through.

This is about keeping people from murdering one another and shooting into crowds (seriously… what kind of person would do that?!?), not reducing car use and making the streets bike friendly.