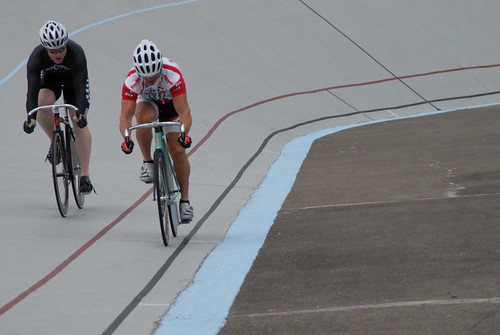 The apron (darker area on the right) of Alpenrose Velodrome is being replaced and we need to help fund the project.
(Photos by J. Maus/BikePortland)

Yesterday, while the cycling world was captivated and inspired by Jens Voigt’s spectacular hour record ride, a call for help went out for our humble local velodrome at Alpenrose Dairy.


If Voigt ever visited Portland, he might make an appearance at Alpenrose, a track that has hosted racing events since 1962 and that we are lucky to have thanks to the generosity of the Alpenrose Dairy company whose headquarters are located on the site.

While Alpenrose has served our community well for over 40 years, it requires ongoing maintenance to keep its surfaces smooth, safe, and fun.

For years, the Oregon Bicycle Racing Association has organized volunteer track clean-up days out at Alpenrose. Those usually involve minor upkeep like patching cracks, sweeping up, and re-painting lane lines. But in the past two years, major repairs have been needed.

As we reported in 2012, OBRA completed a major project to install new straightaways. Now Mike Murray, who heads up OBRA’s track racing program, is working to replace the apron, an area (also known as the infield) where riders warm up and cool down and sometimes seek refuge if they get bumped off their line during races. 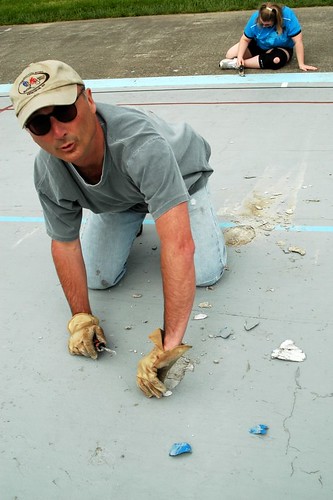 Mike Murray working on the track in 2006.

To make the project pencil out financially, Murray is appealing to the community to help offset repair costs. Alpenrose Dairy is picking up a large portion of the tab, OBRA funds are also filling in, but Murray says velodrome riders and fans are also expected to step up.

“Alpenrose has been very generous in supporting OBRA operations and Oregon bike racing in general,” Murray wrote, in an appeal to OBRA’s 5,000 members, “Now is the time to pay them back. Any amount helps.”

Keep in mind that the Alpenrose Velodrome is much more than just a track venue. It also hosts the Cross Crusade and other events that have an incalculable impact on local bike culture (if you haven’t already, read Rebecca Hamilton’s experience of her first cross race at Alpenrose).

Murray has been working hard on the apron project and it’s on schedule to make a big debut at the upcoming Crusade opener on October 11th. When you ride over it, wouldn’t it feel great to know your donation helped maintain it?

Let’s show the folks at Alpenrose Dairy how much we appreciate this facility. Donations are tax deductible and can be made online via the OBRA website. You can also mail a check to: OBRA/Portland Velodrome Committee, 4318 SE 8th Ct., Gresham, OR 97080.

Thanks for alerting us to the situation, Jonathan. Alpenrose Dairy is one of the reasons I moved to Portland. Plus, I look forward to their chocolate milk when I cross the finish line on Cycle Oregon.

If you’ve ever left sweat, tears, blood and/or skin at Alpenrose, it’s also time to leave some cash. Let’s keep this community asset in good working order for all!

The new concrete on the straights gave about 2 extra gear-inches to this power-impaired rider.

You don’t often see Mike on his hands and knees begging!

Everybody needs to chip in.

the future Red Electric Trail will start at Alpenrose

The Dog track Conversion site for a Casino didnt go .. why not there?

Japan Bets on Keirin Racing . that is a Revenue stream..

Re route some of Longviews Logging exports for materials ..