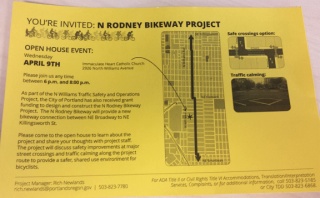 Just in time for the annual uptick in bike traffic, the Portland Bureau of Transportation (PBOT) is moving forward with a project that could alleviate bike congestion on one of the busiest streets in the city. Many people already eschew North Williams’ narrow and crowded bike lane in favor of NE Rodney a few blocks to the east because the residential street is much calmer, quieter and less stressful.

At an open house tonight, PBOT will share details on their plans to turn two miles of NE Rodney — from Broadway to Killingsworth — into an official “neighborhood greenway.” According to a flyer PBOT has mailed to area residents, the goal of the N Rodney Bikeway Project is to “provide a safer, shared-use environment for bicyclists.”

While funding for neighborhood greenways has all but dried up, this project is moving forward because it’s technically part of PBOT’s North Williams Traffic Operations and Safety Project. The idea for adding traffic calming and other bike-centric features to Rodney emerged two years ago as a recommendation from that project’s Stakeholder Advisory Committee.

Back in February, we shared PBOT’s initial design drawings for the Rodney greenway. Like other greenway streets throughout the city, the plans call for speed bumps, bikeway network wayfinding signage, 20 mph speed limits, and sharrows. We expect most of the changes to the street to be relatively straightforward. However, as is often the case, the big discussions and design debates will likely center around crossings of major streets. 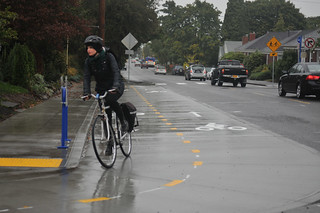 We could see a two-way treatment
like this (at NE Going/33rd) at Rodney and Fremont.
(Photo: J. Maus/BikePortland)

Six intersections in particular will get special attention from PBOT engineers: Russell, Fremont, Shaver, Skidmore, Alberta, and Killingsworth. As we reported back in February, the most significant crossing treatment will happen at Fremont, where PBOT must grapple with a tricky off-set intersection. They’re currently looking at two options: adding curb extensions, bike lanes (on Fremont) and a new crosswalk; or adding a flashing beacon and a two-way cycle-track on the north side of the street (similar to the Going/33rd intersection).

At last check, both the Williams and Rodney projects are expected to be fully completed by the end of this summer.

Here are the details on tonight’s open house:

I don’t get excited about cycle tracks or riding against the flow. That 33rd/Going system is OK, though. The trickiest, least safe part is finding a gap to cross over.

I cannot figure out how one would get on to Rodney coming from the south. Rodney seems marginally useful for getting between Killingsworth and Russell, so basically a nice a neighborhood route. Aside from that, it seems like simply another chunk of orphan bikeway that is pleasant enough when on it, but dumps riders off unceremoniously into dangerous and hostile car-centric territory.

AndyC of Linnton
Reply to  MaxD

“… but dumps riders off unceremoniously into dangerous and hostile car-centric territory.”
And thereby keeping with our bike infrastructure tradition.

I think Rodney has the potential to be a much better bike route than NE 7th north of Broadway ever was.

Reza,
Tillamook to what? Tillamook doesn’t connect to Interstate, it is just a NE route. What about coming from coming from inner SE or SW, anywhere south of Burnside and west of 12th? 7th Ave will actually connect beyond a neighborhood to other quadrants and bike routes (or it would if were built and had a route over I-84)

If you’re looking for access to Interstate, Russell could accomplish that. It’d be even better if they had continuous bike lanes to Widmer but as of now it’s not that bad.

There’s no reason this couldn’t work in conjunction with 7th as a continuous route. Build the bridge over I-84, and then those coming from the south can take 7th to Tillamook, and then jog over to Rodney to continue north. Right now, the bike lanes on 7th abruptly end at Broadway, and then you’re on your own. The ADT of 7th north of Broadway is way too high currently to be comfortable for many cyclists. 7th needs some serious traffic calming or diversion if it’s ever going to be a good route. Removing the centerline is a good start.

We are in complete agreement about 7th

MaxD — Rodney now crosses Broadway and Weidler with a traffic lights (Thanks to the Streetcar improvements) (It changes names from “Rodney” to “NE 2nd” at Hancock). So now you can take Rodney all the way down to NE 3rd and Multnomah and access the Steel Bridge without dealing with the Vancouver/Wheeler/Williams/Weidler crapola.

Can we get some diversion please? Rodney near Russell gets a lot of car traffic from motorists going to Wonder or other nearby establishments continually circling the block for on-street parking.

Yes, PBOT, please start installing diverters along ALL of the n’hood greenways.

How are they going to straighten Rodney? There’s a couple blocks in there (Alberta, Rosa Parks) with some pretty significant deviations.

None of this is rocket science. My biggest concern is that PBOT over-designs whatever they’re planning, and ruins what is already quite an acceptable cycling route.

Diverters are essential–not speed bumps–if you want to keep cars from blasting down the stop-sign reduced route. I think speed bumps are annoying and ineffective compared to diverters. And since there is never any speed enforcement on the greenways, we need to discourage cars from using them as alternates to major arterials.

I live two houses off of Rodney. It may seem like a peaceful route, but I can assure you that any street that is running east from Williams is used as a quick short cut to MLK. I have witnessed many close calls for cyclist’s on Rodney as cars rush toward MLK. Speed bumps on Rodney may help the 40-45mph I currently witness regularly, but be careful of any street that meets Rodney.

I live on Rodney just south of Killingsworth. Not a ton of car traffic on my part of Rodney b/c the street is so narrowed by continuous street parking on both sides. Pretty popular for cyclists already, though yeah… stop signs. I wish I could go to the meeting tonight. I kinda like the idea of my street turning into a Greenway, though as with all things the devil will be in the details.

The big problem with using Rodney is that there are stop signs every two blocks. If they don’t change this, it’s a huge disincentive to bike on Rodney. It’s a good option when I’m with my kids, though, because no way am I taking them on North Williams.

Because bicycling is an inexpensive and environmentally friendly mode of transportation with the side benefit of providing exercise and a pleasant endorphin high, it is easy become passionate about it. In this passion it is difficult to imagine the blessings of cycling are not sought by everyone, but in fact it is not a thing that everyone wants.

Rodney runs through the neighborhood where the long time residents got in a huff because, with the Williams/Vancouver bike lane discussion, their neighborhood was planned for use by something they did not care about. Rodney has stop signs and these provide traffic calming which quiet neighborhoods relish. To get rid of stop signs to facilitate bicycles disregards the best interests of the residents. Deeper than that it it demonstrates that cyclists perceive their values as more important than the values of the residents and that is not a winning strategy.

There is a way to get Rodney to become an efficient bikeway while still maintaining values of the residents. The immediate neighborhood must be involved in the planning and decision making to make that happen.

Chris I
Reply to  Granpa

So they would have preferred lane reductions on Williams that would have diverted car traffic to their street? I would take bike traffic over car traffic on my street any day.

Although Interstate 5 is off topic, it supports the thought that this particular neighborhood has gotten the worse end of the deal time after time when those who knew best imposed their will upon them. Thanks for the validation.

I am a resident. I want the stop sign situation to change, with diverters in key places, like on Going. I want this in part so it’s safer for my son to ride his bike to school.

I went to the open house for the 20’s Bikeway at Central Catholic a couple weeks ago, and it was great to meet the folks from PBOT. They are friendly folks and glad to listen.

I live on Rodney, just north of Fremont. I’m looking forward to the improvements that will let me use Rodney to get down to Russell/Tillamook/Broadway/Multnomah more easily.

I wasn’t able to attend the open house, hope they got a lot of support.

So what does PBOT consider “end of summer”? It’s mid July and they haven’t even showed hints of starting this project.