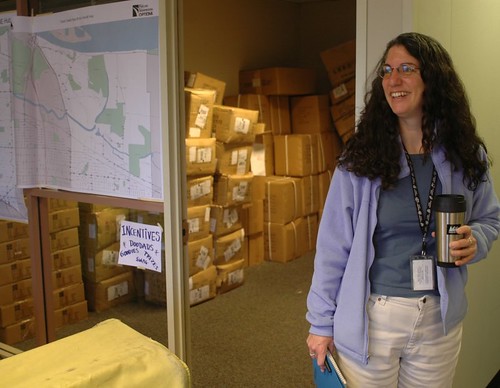 After 12 years of bike maps, blinking lights and walking tours, one of Portland’s most innovative transportation programs is shifting direction.

Starting next week, the city’s residential SmartTrips program, which gives Portlanders customized packages of free resources to help them get around by walking, biking or taking transit, will stop targeting specific neighborhoods and instead focus on reaching people who’ve recently moved.

The city’s website will continue to offer the free bike maps that adorn thousands of local refrigerators. But as it manages a 17 percent budget cut, Smart Trips is focusing its outreach and its free mail-order goodie bags on 45,000 or so households that will move to new homes in Portland this year.

“We’re trying to identify those opportunity moments. People are already changing everything about getting from place to place. So their minds are open.”
— Linda Ginenthal, SmartTrips program manager

“We’re trying to identify those opportunity moments,” program manager Linda Ginenthal said in an interview Tuesday. “People are already changing everything about getting from place to place. So their minds are open.”

The program will tap the same direct-mail database gleaned from Post Office records and utility bills that commercial companies use. But the product being marketed is low-car transportation: bike, transit and walking routes, nearby carsharing services, rideshare matches and so on.

Households can request a family biking guide that “starts with pregnancy and goes through riding with kids to school,” a carsharing brochure, coupons to local businesses, visibility lights, a book of local walks and hikes, a pedometer, and maps of all sorts.

Financially, the goal is to reduce wear, tear and congestion on city streets by reducing car trips. Trip diary surveys show that it seems to work.

“We measure the success both with participants and with people who are around the area and have found consistently a 9 percent reduction in drive-alone trips,” Ginenthal said.

She likes to tell the story of an early program year, 2004, after she introduced the concept to the United States based on a successful pilot in Perth, Australia. The city targeted homes along TriMet’s new Yellow Line, but as a control group it ignored one pocket of the neighborhood. 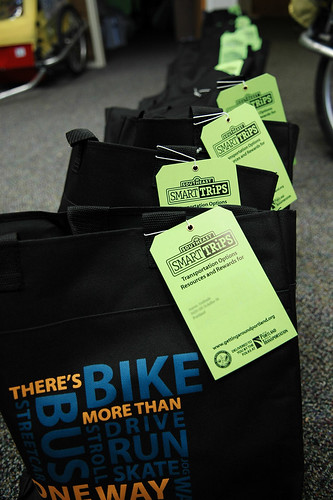 Households near the rail line that hadn’t been reached by Smart Trips cut car use by 3 percent. But those Smart Trips did contact reduced car use by 12 percent.

“It cost us a million dollars to do the SmartTrips program,” she said. “And we spent many, many millions of dollars on light rail and it got us a 3 percent reduction in trips. You do the math.”

Cities across the country — including, last winter, Chicago — have since created similar programs. This year, the Portland program’s funding is down to about $500,000. It comes mostly from Metro in the form of a Regional Travel Options grant.

In addition to tens of thousands of people arriving in Portland from elsewhere, it’ll reach the 12 percent of Portlanders who’ve moved, in a given year, from a different home in Multnomah County.

Ginenthal said she’s guided by the science of how to change behavior, which depends on reaching people at moments when the habits of their life have been swept clean.

“When there’s a path in the snow, you walk in the path that you’ve gone before,” she said. “We’re looking for the times when it snows. When it snows, you have to make a choice about how you’re going to proceed.”

I <3 Smart Trips but there's sort of a logical fallacy in the MAX/Smart Trips ROI comparison: if it weren't for the light rail, I bet Smart Trips wouldn't have been so successful, as it's part of the network that Smart Trips is trying to shift people to.

That’s true, and I’m sure Linda would agree. She said a couple times in our conversation something I’ve heard her say before: she can’t sell a product that doesn’t exist. It’s the combination of new infrastructure and direct marketing that seems to work.

Under the new behavior-based (rather than geography-based) system, the product she’ll be trying to sell is the whole package of existing infra rather than any new stuff in particular.

I think another nuance to the “chicken and egg” dynamic is how SmartTrips impacts utilization of infrastructure investments. Sure, if you build a light rail line or a multi-use path, people will use it. But MORE people use those investments if they get the proper combination of information and encouragement. It’s not just about mode shift; it’s about maximizing the investment in our infrastructure. But Linda’s absolutely right, people can’t/won’t use a choice they don’t have.

Does Smart Trips ever get any funding from big transit projects? I love leaders who are guided by science!