Here’s an interesting and persuasive idea that could turn Northwest Johnson into the most pleasant crossing of Interstate 405 between Northwest Portland and downtown.

It comes from reader Sean Pliska, who writes that until about a month ago, he “lived in NW for a couple years and used Johnson regularly.” The key idea of his plan is to made auto traffic one-way on Johnson between Northwest 13th and 17th Avenues … in alternating directions. 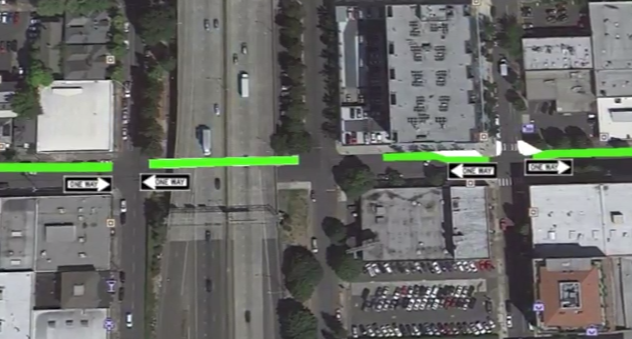 Here’s Pliska’s description of his plan, as narrated in the video above:

Northwest Johnson has the potential to be a pedestrian-friendly, multimodal, livable street. It’s planned as a bike boulevard, and currently has no dedicated bike facilities.

Since Johnson’s unbroken through northwest and has access to I-405, it’s often used as a through street for auto traffic. Cross traffic at 14th and 16th often wait a long time and cross quickly. One solution to this problem would be to change the direction of traffic and add a two-way bike track.

Changing the direction of traffic to one way allows people in cars to access parking at REI, turn right, or continue on. On 16th, traffic from REI can easily merge onto 405. Through traffic would be diverted onto the Glisan-Everett couplet and Lovejoy and Northrup. Since the cycle track takes up an auto lane, parking is largely unaffected. The city could also extend the sidewalk into 14th, making it safer.

The city has already installed a diverter on Northwest Marshall, and while this is really helpful, it doesn’t address the need south of Marshall. This project would retain parking, increase traffic flow and create a safer environment for pedestrians and bikers.

Pliska, who says he is “by no means very informed, or trained in this sort of thing,” has also put together an interesting concept for “the minimum change on the Park Blocks that people on bicycles need to switch their route from Broadway to Park,” plus a vision for major north-south bike improvements to the Park Blocks.

He may not be a pro, but one of the best things about Portland is that sometimes it’s willing to listen to great ideas that don’t come from pros. Both of these are worth checking out.

Despite Pliska’s humility, this idea is actually very well “informed.” This strategy is often employed in the Netherlands where the goal was to create an “arterial” route for bikes but limit motor vehicles to local access. It has the added benefit of allowing for emergency vehicle access if need be as well.

About halfway down the page here (http://halfthefun.net/2011/07/04/) is a bit of detail on one such installation in Ypenburgh, a “suburb” of Den Hague (although the Dutch would be loathe to call it that). I wish I’d written and photographed more–the significance is much greater in hindsight. But I’d love to see this strategy tried in NW Portland.

Don’t fret about not photographing that area more 😉 – with the power of the internets & Google Street View, anyone can easily imagine themselves traveling down that road by bike: http://goo.gl/maps/cQsl1 … and guess what, it appears that people haven’t abandoned those buildings to live somewhere else that has easier car access.

As a bonus – check out that green rail line to the south of the road. Looks nice, eh?

Also agree about the Broadway to Park move. (or alternatively Park & 9th! Broadway is just too busy a car traffic street, and it will never really have effective dedicated bike lanes that also allow easy access for cars to critical retail shops in the area.

Think of how great it would be to have Park/9th be pedestrian and bike only. Very bike-forward thinking…

I ride this street daily, and would love to see this plan implemented. The adjoining 14th street bike lane north is the most dangerous part of my daily commute, and anything that can be done to streamline traffic and prevent right turns from 14th would do a lot to increase safety along this travel corridor. It’s really in need of improvements like this.

Chris I
Reply to  deborah schultz

The problem with 14th is that it has too many gaps without signalization or stop signs to control speeds. This is compounded by the fact that an exit off of I-405 leads directly onto the street. People exit the freeway and then continue at near freeway speeds on the surface street.

This basic design could also be used on SE 9th from the new MAX stop at Clinton to north of Broadway once the overpass…cough, cough….is built.

Sorry, that can’t work there. The only auto access in/out of the parking garage for REI, monthly parking, and the apartment tenants above REI is off of Johnson. The block between 14th & 15th would need motorist access no matter what.

God yes, something on this street, please.
Hey city, check it out, in this model you can retain all those sacrosanct parking spaces and make it nicer for everyone.

Brian Davis
Despite Pliska’s humility, this idea is actually very well “informed.” This strategy is often employed in the Netherlands where the goal was to create an “arterial” route for bikes but limit motor vehicles to local access. It has the added benefit of allowing for emergency vehicle access if need be as well.

Yes! I noticed these treatments a lot when I was living in Amsterdam (apparently during the same time you were in the NL, judging by your blog dates. Great blog, btw!).

Actually “noticed” is probably not the right word, because on a bike you hardly notice it at all. You only realize how different it is for cars when you take a taxi home or something and realize the straightforward way you bike/walk home is not the way cars get there due to the alternating-block one-way streets.

Eerste Weteringdwarsstraat is only two blocks long but as you can see on the map halfway through it changes directions. It’s all seamless for bikes and cars can still access such streets (there’s even some street parking), it just highly discourages through car traffic. In addition, it causes local car traffic to be so low and so slow that if need be emergency vehicles could probably really swoop on in against the posted direction if it really were that urgent.

About halfway down the page here (http://halfthefun.net/2011/07/04/) is a bit of detail on one such installation in Ypenburgh, a “suburb” of Den Hague (although the Dutch would be loathe to call it that).

Hah, yeah, I have to say the Netherlands changed my ideas about “suburban” living somewhat as I realized that just because a neighborhood isn’t in an urban core doesn’t mean it has to be dull, unwalkable and completely auto-centric. It’s only our current built environment in the US that leads us to generally conflate suburbs with these things (though there are some noteworthy exceptions).

As an aside, I’m really interested in the concept not only of retrofitting downtown/urban areas in the US for better infra but also suburban areas, especially because bikes are the ultimate egalitarian way of getting around and suburbs are increasingly diverse socioeconomically, yet archaic 1950s-2000s autocentric suburban spatial layouts force especially lower-income suburban residents to spend absurd percentages of their income on getting around (in addition to all the other problems autocentric designs bring).

This is one reason I was so impressed reading about the Think Dutch event in Portland, especially with that last rendering (http://bikeportland.org/2013/09/05/dreaming-in-dutch-six-young-planners-visions-for-portland-93450) of the Dutch-style protected cycletrack intersection at the Walgreens intersection in a more suburban area of (I think?) East Portland.

Infrastructure advocates pushing for top-notch upgrades in areas like that are absolutely right to not only focus on hip, trendy urban areas but also areas that currently represent the status-quo spatial layouts where the majority of the US lives today.

I wish I’d written and photographed more–the significance is much greater in hindsight. But I’d love to see this strategy tried in NW Portland.

Yes! I totally get ya on the whole “wish I had written and photographed more” thing during my time living there. My profession has nothing to do with urban planning (though I’ve always had a side interest in it) and just happened to move to the Netherlands for work and quickly took for granted the amazing bike infrastructure.

Though I came across plenty of interesting stuff just going around at the time I didn’t really seek out interesting infrastructure treatments (like cycletrack roundabouts, rare in central parts of Dutch cities since roundabouts tend to be in newer more “suburban”–to use that term–areas).

“He may not be a pro, but one of the best things about Portland is that sometimes it’s willing to listen to great ideas that don’t come from pros. Both of these are worth checking out.”

As an admirer of Portland from afar (SF) the layperson-as-advocate-taken-seriously ethos is something I do find really impressive about Portland, especially as a non-urban planner myself. It’s hard to imagine something like this being taken seriously in SF, sadly.

Last time I visited Portland I definitely remember going along that stretch and think it’d be a great improvement!

I work right at the corner of 14th and Johnson, and while intriguing (and would make my bike commuting down from the west hills a lot easier) I do see some issues, some of which have been raised. First, I have my doubts that one way auto traffic would indeed be adequate for access for the garage adjacent to REI. If traffic had to circle the blocks to get in/out only one way I could see it leading to much worse traffic problems on Irving and Kearny. Also, 15th would need to be drastically upgraded, as it’s in poor shape and no better that the warehouse access alley it was originally designed as.

Second, the sight lines while exiting that garage are poor, and even while creeping out in a small vehicle scanning constantly, I’ve pulled in front of a cyclist who just sprinted across 14th shooting a gap in traffic. A two way cycle track would just make it even more difficult. It would practically need a traffic cop waving people in and out!

Lastly, a light or other traffic control device would need to be added to 14th at Johnson. Traffic does fly down 14th after it merges from two lanes at Glisan, and it’s several block until the Lovejoy light. at Johnson it’s probably at peak speed between those lights. I’ve had scary experiences as a pedestrian there both from cars and bikes (especially bikes, unfortunately) If I’m crossing Johnson either N or S bound and a cyclist on 14th sees a gap in auto traffic on Johnson they go full sprint typically and I have nearly been hit many, many times when I am already crossing. This intersection would desperately need calming to protect cyclists from cars, and pedestrians from both.

This is a very interesting idea. I used to live up there as well and took Johnson to the Broadway Bridge all the time (I still use it if I am going up into central NW from NE as I prefer it to Marshall). I would have thought of Johnson as needing a more traditional BB treatment (it desperately needs stop signs turned/removed), but having an alternative in case there are issues with traffic volumes is a great idea. Carefully designed it could work very well. Love the citizen innovation!

I really like his ideas for Johnson and Park!

I live, work, walk, ride, and drive in NW – potential REI problems aside, this is just a fantastic idea.