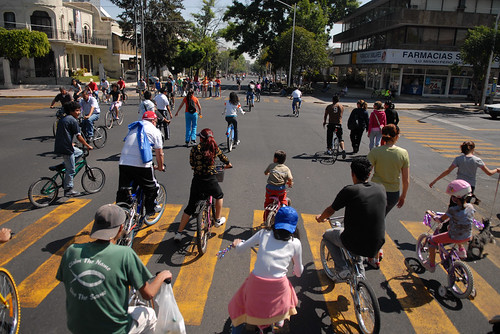 The Via Recreativa in Guadalajara is just one of hundreds of open streets events in Latin America. Former Metro councilor Rex Burkholder will lead a presentation about them next week.
(Photo by J. Maus/BikePortland)

With Portland’s Sunday Parkways firmly ensconced in city budgets and citizen psyches, it’s a good time to step back and take a broader look at the open streets revolution. Since Bogota’s Ciclovia gained widespread attention (thanks in large part to this 2007 Streetfilm), open street events have spread through America like wildfire.

Earlier this week, Streetfilms released The Rise of Open Streets — a new film that summarizes the open streets movement and shares the perspectives of several policy and planning leaders that have advocated and organized them. The film makes it clear that these events are a runaway success in the U.S. Along with bike share, open streets events have probably done more to introduce new people into cycling than any piece of infrastructure, planning policy, or traffic law.

Also similar to bike share, open street events seem to have universal appeal on city dwellers no matter where they live, what they believe, or what their usual transportation preferences are.

Next week, former Metro councilor and one of the founders of the Bicycle Transportation Alliance , Rex Burkholder, will share his knowledge about the rapid rise of “ciclovias” in Latin America. Burkholder is set to present at the Portland Bureau of Transportation’s monthly Bicycle Brown Bag discussion series on Thursday, January 16th. Check out the official event blurb below:

Ciclovias are growing rapidly in Latin America, with over 400 cities opening their streets every Sunday to people on foot, on skates and on bikes. Up to a million people ride in Bogota’s Ciclovia every week. What do they know that we don’t?

Hear from Rex Burkholder, Honorary Ambassador of the Network of Ciclovias Recreativas (CRA) since 2007. A founder of the Bicycle Transportation Alliance, ex-Metro Councilor and community activist, Rex will share the triumphs and challenges of transforming cities into people-friendly places in Latin America. His website is gettingto2100.org where he writes on issues of sustainability, cycling and hope.

Portland’s first Sunday Parkways of 2014 is only five months away (tentatively set for May 11th), so we’ve still got time to put some of Burkholder’s insights into action.

Great article. I don’t know of another event in the city that exposes more people to what the city could feel like if more folks felt safe riding their bicycles in their neighborhoods. It is a very efficient way to get uninvolved masses interested in making streets more welcoming.

Is there a tentative date set for the June Sunday Parkways yet? I checked out the website, but couldn’t find any information.

How are the twins?! Been too long.

(*They haven’t announced these, but I found them buried in a PDF of the 2014 Sunday Parkways Sponsorship Proposal packet)

Thanks for the info, and for inquiring about the babies. We’ll have to get the kids together soon.

I’m actually asking about dates because I’m putting together a Pedalpalooza ride and I don’t want the date to conflict with Sunday Parkways. I don’t want to miss any of the SPs this season.
Our ride will be the “Twins and Multiples” ride. I’m working with the Double Tree who will be offering double digit discounts off of rooms for folks coming in from out of town who want to attend the ride. I’m hoping to get the largest number of twins and multiples on a ride together ever. I’ll keep you posted.

I don’t meen to hijack this thread. Back to discussions about Open Streets…

Cambridge, MA (across the river from Boston) does (or at least they used to when I lived there) this with Memorial Drive along the Charles River. It was pretty nice.

For perspective, it’s a road with traffic similar to Naito.

Hey, the link to his website links instead to a PBOT page

Please note that the combination of dates and locations may change. We are still in the planning phase.

Trivia: remember the downtown Sunday Parkways ride from 2(?) years ago? They won’t ever be doing that again. There were so many intersections to control that it was very expensive to pay for all of the police overtime, etc, at least according to the SP rep who called me last year when they were fundraising. (Mrs Dibbly & I live downtown and really enjoyed that event.)

I’d love it if Portland could do some sort of cyclovia ride that didn’t cost so much to put on. Perhaps there are lessons to learn from some of these other cities, particularly the ones that manage to do it every weekend in the summer. A weekly event would be fantastic!

Checking out BikePortland, pining for good biking conditions, only to see an intersection in my neighborhood in Guadalajara. ha!

The RecreActivas here in the Zona Metropolitana de Guadalajara are really popular and held every Sunday, on major, central streets, like the one shown in the photo. There are always tons of families on bikes, teenagers on skateboards and rollerblades and folks running or walking alone, with family members and/or dogs. And there are tons of other activities along the routes, too. It´s a wonderful sight to behold.

Unfortunately, GDL only has 2 actual bike lanes, which are on major streets and there is about zero political will to build more. There is a lot of biking, just most of done it in really dangerous conditions, especially on the outskirts of the city. Mountain biking is huge and the protected area where I work sees at least 1000 mbers every weekend.

Up until 2 months ago I lived outside of the city, but now that I´m centrally located I hope to get involved in the non-motorized transportation movement here and the efforts to improve public transportation, which tends to be a threat to increasing bike transportation as they tend to run people over, frequently. Just riding them is scary…but that´s another story. In the coming months, maybe I´ll have more to share about biking in the GDL.

Alicia, I will be in Guad in April offering a workshop at ESARQ on designing for sustainable communities. I plan to spend a couple of extra days there to play the tourist. Maybe we could set up a talk about the Portland Experience with Cycling for your community?
rex

Hmm, the video won’t play on iPhone. Any alternative places to see it? Same on the Streetfilms site.