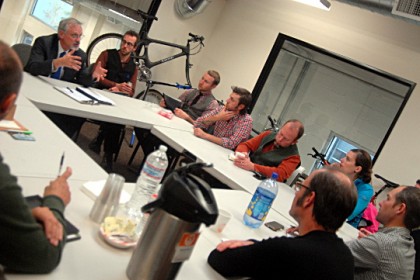 (Jonathan Maus contributed to this story.)

Portland is nationally known as the city with the highest number of bike riders. But when it comes to making bikes, our reputation is about quality, not quantity. We’re known for custom, handcrafted bikes, but not for producing them in large numbers. The city’s mature cluster of bike makers could change that if they teamed up, representatives of the local industry’s small businesses agreed at a roundtable discussion led by U.S. Congressman Earl Blumenauer on Wednesday.

The event was convened by Rep. Blumenauer, who said he’d “dedicated my life” to making biking a big part of the city and would happily look for ways to help the industry itself become “the next part of the Oregon identity” if they can offer a clear list of ideas within the next few months. The event was a more focused follow-up to a visit to the same location by the U.S. Secretary of Commerce in September.

“A lot of folks at this table are at the point where we’ve scraped and saved and built this from the ground and now we’re getting to the point where we need to scale up,” said Ira Ryan of Breadwinner Cycles, who earlier this year teamed up with competitor Tony Periera with a goal to create “Portland’s flagship bicycle company.”

Using an anlogy he said he’d heard from Natalie Ramsland of Sweetpea Bicycles, which builds custom-fit bike frames, Phillip Ross of cargo bike maker Metrofiets said Portland has the opportunity to be just as identified with quality bike manufacturing as Maine is with quality lobsters.

“The analogy I would draw is to the Oregon wine industry,” Blumenauer said. “They realized they could build a brand, and there are now 470 wineries. I’m going to a big event with them Saturday night.”

Blumenauer, a former city commissioner, suggested that the group should make a pitch to the Portland Development Commission (PDC) to get a part-time administrator who could support and coordinate the industry collaboration.

“I do believe that this [industry cluster] is every bit as promising, if not more, than the others we have here.”
— Rep. Earl Blumenauer

“I do believe that this [industry cluster] is every bit as promising, if not more, than the others we have here,” Blumenauer said. “The footwear industry: people talk about Nike and Adidas. Let’s talk about Keen, which is little and growing. Let’s talk about Danner boots.”

Dave Woronets of Zen Bicycle Fabrication, which makes frames and forks for other brands at their production facility in north Portland, said many people in the bike industry had been impressed recently by the Fort Collins Bicycle Industry Alliance in Colorado.

“They’re really getting some big attention in the bike industry just by being a coalition,” he said.

Blumenauer urged the group present Wednesday to move quickly on the decision and agree on a plan by early spring at the latest.

If you’re sensing a bit of déjà vu, that’s because this idea has been floating around Portland since 2006 when Portland City Council passed a resolution that officially recognized the local bicycle industry. That resolution (spearheaded by then Transportation Commissioner Sam Adams) sparked action from the PDC, who designated a staffer to put some teeth into the effort. There was a big meeting in City Hall, a plan to host a major bike industry trade show in Portland, and even the formation of the “Oregon Bicycle Business Association”.

Unfortunately, the pieces to the puzzle failed to come together and none of those efforts bore much fruit. There’s reason to hope things could be different this time around. The city of Detroit has sparked excitement for trying to bring back high-volume bicycle making to U.S. shores. And locally, Chris King has laid a hopeful foundation with their Cielo brand while companies like Breadwinner and Zen Bicycle Fabrication show there’s a market and a willingness for a more production-oriented, high-volume approach.

If the effort this time around is to be successful, it will take a commitment from both Blumenauer and members of the local bike industry. As we’ve seen with Oregon Craft Beer, there is huge upside to organize collectively for the greater good of the industry.

“This is going to happen,” Blumenauer said. “We’re going to be the bike capital. … Whether this happens in six to eight months or in another six to eight years.”

— For more background on this topic, browse our bike industry archives and read our in-depth story, Could Portland become a bike industry hub?

Perhaps Blumenauer is up to some subtle political strategery where he has become aware of a looming political and economic threat to Portland’s bicycle industry but doesn’t want to tip his hand to the opposition that he knows what he shouldn’t.

Blumenauer is absolutely right on this. Though we have a lot of businesses locally that do well for themselves, and show a ton of talent, in the bike industry, I think we are all guilty of operating as “tiny islands” instead of as a collective. In order to grow beyond what exists today that needs to change.

Big business is always going to run everything. The best we can do is to have the right kinds of business. I want the bike industrial complex to be in charge!

I’m gonna go straight to the heart of this matter.

I rode my linseed oil coated 853 bike in and around Portland for three years as transportation. A few years later I replaced it, having spent seven years cleaning out and replacing rust filled linseed goop from everywhere inside the frame. The frame I replaced it with is made of that newer material so well hated in Portland I dare not mention its name. It rides WAAAY better, cost less than 853 and I won’t be purchasing a new transportation frame again in this lifetime. I ride everywhere.

I suggest your coalition opts for a major tech upgrade and builds something of similar QUALITY. Rust never sleeps.

Hate? I’ve felt nothing but love for http://www.ruckuscomp.com/. If Sean forged ahead with frames… <3 <3 <3

Thanks for the love! We have been building some prototypes/custom frames non publicly for awhile and have been considering producing a limited run of frames….maybe when our new Lab opens up next month!

We were actually seated at this meeting as well but apparently out of camera/quote shot.

Hey RW, I think you’re wrong if you’re trying to imply that Portland’s love of custom steel frames equates to low quality. Maybe just something was wrong with YOUR bike.

Lots of us have been riding steel bikes all over Portland for many years, year-round, with no problems. My main commuter has a steel frame that’s nearly 25 years old. My mountain bike (which spent a couple years as a commuter bike) is custom-made-in-Oregon steel. Both bikes have held up fine in the Oregon rain. Being orignally from Minnesota (where rust really never sleeps, thanks to all the road salt) I’ve got to say that rust concerns around here are usually vastly overblown.

I’ve wondered about this for quite awhile. There are many Americans who can do incredible custom work, in a variety of fields. We’ve lost the ability to mass produce things (NB: we can discuss the reasons for this – and they are legion – up, down, and sideways) that are both high quality and affordable. It would be great to see the bicycle industry lead the charge to reverse all of this.

what happened to the organization which existed a few years ago? The Constructeurs Alliance or something like that? Put on the Oregon Handbuilt Bike Show?

Yep, OBCA was definitely part of yesterday’s discussion; a few of the people present had been founders or past leaders. It seemed as if teaming up with OBCA in some fashion was seen as a possibility.

Sounds like a Portland bicycle industry manufacturers group. (Not just frame builders) Think, Nutcase, Showers Pass, Chris King, etc.
As longs as its mission is to get the tools to help Portland business expand, it sounds like a good idea. It was tried in 2006, but there are bigger players in the industry here now, so it might work.

Custom hand-made bikes are SO OVER!

Sorry, had to insert the Portlandia reference.

If Dutch Workcycles and Pashleys can sell in the US at imported Euro-prices, I’d think Portland could get a toehold in the market for solid, work-horse city bicycles. The only thing that could convince me to trade in my Omafiets would be a locally made bike that suited my needs as well.

the fact that european manufacturers with revenue to burn can sell donzens of bikes in USAnia is not a business plan.

That table looks square to me.

There once was a Portland bike shop lobby many years ago, 10+, and according to the shop owners I talked to, it fell apart when it appeared to a few smaller shop owners that too much attention was being shown upon the large shops, infighting ensued, so it fell apart. If this kind of “silo” thinking can be kept to a minimum, and realize this organization would be for the greater good of the entire industry, it would be successful. All aspects of bike industry should be included: retail, wholesale, manufacturers, importers, exporters, designers, employees, etc.

rwl1776
There once was a Portland bike shop lobby many years ago, 10+, and according to the shop owners I talked to, it fell apart when it appeared to a few smaller shop owners that too much attention was being shown upon the large shops, infighting ensued, so it fell apart. If this kind of “silo” thinking can be kept to a minimum, and realize this organization would be for the greater good of the entire industry, it would be successful. All aspects of bike industry should be included: retail, wholesale, manufacturers, importers, exporters, designers, employees, etc.
Recommended 0

I think the idea was a manufacturing segment. If you add retail/service and distribution it would take a army to manage.
The retail & distribution chain has it’s own unique set of needs that rarely line up with manufacturing.
Manufacturing Needs: securing large industrial restate, product liability insurance, investment group etc..

Not a fan of hierarchies. They have their place, for instance, within an organization, but having an organization of organizations just allows some kind of corruption to seep in somewhere. It seems to me that these individual organizations are doing fine on their own, so I don’t see a reason to mess with that.