Last night in City Hall, a rep from the Portland Development Commission (PDC), Commissioner Sam Adams (and staff) and other interested stakeholders joined a group of Portland’s bicycle industry leaders in the first meeting in a burgeoning effort to make Portland the most desirable place in the country to do bike business.

In attendance was a diverse group that included: 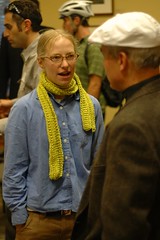 [Natalie Ramsland of
Sweetpea Bicycles
and Andy Newlands
of Strawberry]

Sitting around a circle of conference tables, the group listened to Commissioner Adams say that he wants to make Portland the “it place” for the cycling industry.

“When I took over as transportation commissioner over a year ago I felt like the cycling industry was languishing within the PDC, due to their huge workload and many other responsibilities. That why my office lent a hand to make bicycles and related products an official targeted industry.”

PDC liasion Jennifer Nolfi and Adams’ senior policy director Maria Thi Mai gave a report about their successful trip to the Interbike trade show. Nolfi reported that there are, “a handful of companies that want to be here in the short or long term.”

Commissioner Adams and Chris King Precision Components marketing director Chris Distefano said the time is now to leverage Portland’s national popularity and reputation. According to Distefano, “Portland has a great name in the industry right now,” and Adams chimed in that we need to “capture that fad.” 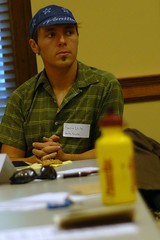 The meeting was an opportunity for companies to speak up about how PDC and the City of Portland can help them build their business and to identify what programs, ideas, and initiatives should be worked on.

Ray Goody of Sapa Profiles, Inc. said he has a major need for welders. His company specializes in shaping aluminum into bike frames and does work for many large bike companies.

There was a lot of discussion around forming a new bicycle industry association and that led to a conversation about the potential of creating some sort of Portland bike industry show or bike festival.

I lent my support to the forming of a new bike industry association because I see it as an imperative step to move this effort forward. An association would facilitate communication, advocacy, business and marketing training, and would give the region’s bike industry a more powerful seat at the table.

At the end of the meeting all the ideas we’d discussed were tallied up and everyone was asked to vote for their top three. The ideas getting the most votes were than assigned subcommittees who will meet and begin making them happen. Here are the three ideas:

This is an exciting effort that we’ll be hearing much more about in the future.

That is great that the City is partnering with the business/cycling community to be proactive in trying to attract more bike industry to the area! I’m proud to be a Portlander!

Ok..I have nothing against building up the bike industry in Portland(obviously), I love that we have Chris King, Vanilla, Ira Ryan, etc etc. I love that in almost any area of town I am passing through should I fancy to stop into a bike shop I probably can find one not too far away.
Soooo, the thing is, I’d love to say “Hell yeah! Put Portland on the bike industry map(I mean it sort of already is though, but still…)” but, before I could really get behind that I’d need to know that my interests as a cyclist were appreciated by the city, which recently has not been shown.
Where is the meeting for that?

Portland definitely appreciates your interests as a cyclist and there are many meetings and avenues you can be a part of.

The Bicycle Advisory Committee meets on the 2nd Tuesday of every month from 7-9pm in City Hall and is open to everyone.

That would be a good place to start.

We also had a big Portland Bike Summit a few months back and PDOT has taken all the feedback from cyclists and put them into an official report document.

There’s no shortage of opportunities to make your interests heard. Stay tuned to this site or contact me directly and I’ll be happy to give you more information.

There has been some talk on another forum of having the North American Handmade Bicycle Show in Portland in March. Can anyone local confirm or deny?

The 2007 NAHBS show is already set for San Jose. The PDC is currently in talks with the show’s owners and I think there’s a good possibility it might come to Portland in 2008 or 2009.

I reported more on this here.

Regardless of whether or not that show comes to Portland, there’s also potential that we’ll put on a show of our own to highlight builders from the region.

I am just referencing all the recent turns taken by the city funds to try to make biking more difficult. I know that Portland is a great city for biking, compared to many other cities. I’d like to not worry about comparisons though. We could clearly be greater…

(Also, let’s please not turn this thread into a discussion of how Portland is or isn’t encouraging cycling. That horse is beaten to death…)

The painting bottleneck problem is definitely on PDC’s radar.

Unfortunately it didn’t come up last night but I know that the PDC has met with at least one local bike painter and they, along with the Commissioner’s office understand and are aware that the problem exists.

Much easier than creating a new, stand alone big money race in Portland.

Hmmm, maybe I sould have gone to that meeting!

Jonathan said: “Portland definitely appreciates your interests as a cyclist and there are many meetings and avenues you can be a part of.

There’s no shortage of opportunities to make your interests heard.”

But, Jonathan, how can one make one’s interests heard if PDOT (Roger Geller, in the Benson bike lane case) does not make the issues known at BAC meetings? How does one feel like one’s, as Tiah said, “interests as a cyclist were appreciated by the city” if cyclists only become aware after the fact?

This probably wouldn’t fall under the jurisdiction of the City of Portland or the PDC, but how about setting up some sort of bicycle related vocational training program at PCC or maybe Benson High? It could cover both wrenching on bikes for future shop employees and could provide some education and experience with painting/welding/machining etc. for the builders.

So, once again I ask, is there going to be assistance available for Portland residents who are already here, and would like to start a bicycle related industry?
I see that we are trying to pull in outside buisness, but what about turning some of what we have here into bicycle comapnies?
I myself have been mulling over a number of ideas, to switch from messaging to making products, and helping the bicycle comunity.
I know that big tax breaks are given to the new south waterfront buildings, big loans to those and other projects around our city, many of these being built by outside forces.
I guess this is a call to offer these services, or to make it more apparent what there is to offer, to local, Portland residents trying to make their way in the difficult to survive in ( for the little guy) bicycle industry.
Please please please tell us that there is a local effort going on, along with the national recruiting. Oh please don’t say no.
Dabby

I’ve been wanting to start a bike taxi company for a while.

Dabby, I love the way you think.. that should definitely be a priority to water the seeds of innovation here in our own community.. Nothing says Portland bicycle industry like a bicycle-related business started right here at home! I’m there with ya..

The vast majority of the City’s and the PDC’s efforts are focused on helping bike industry in Portland.

The PDC has had personal, one-on-one meetings with companies as big as Chris King Components and as small as one-man framebuilders like Ira Ryan.

If you have an idea, write up a business plan and get it going. When you need help to make it happen, tap into the PDC’s resources and go from there.

Vocational training is definitely on the table. The idea of working with community colleges to offer bike-specific welding and training courses was brought up by Meeky Blizzard…she’s the livable communities expert in Congressman Earl Blumenauer’s office.

Lance — I have connections to Benson High School (I’ve taught there) and would be interested in meeting with you if you’re serious in helping start a bike vocational program.
This is an idea I’ve kicked around for months, but being a full time mechanic haven’t had time to work on it.
come find me at my blog if you’re serious.

Don’t get me wrong, I like the idea of Portland enhancing it’s stature as a bicycling city…

But allying the bike community too closely to the PDC??? – well, I’ve gotta echo Dabby’s sentiment.

The PDC is funded (excessively) by our property tax dollars and their primary goal seems to be giving away huge tax / development deals to condo builders in the Pearl and now the SW Waterfront.