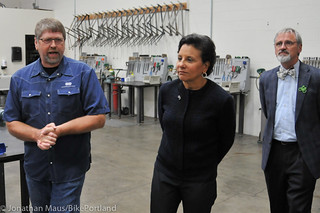 Flanked by Congressman Earl Blumenauer, the United States Department of Commerce Secretary Penny Pritzker beamed about the cycling “revolution” she’s seeing across the country during a stop on her national listening tour in north Portland this morning. But to keep it going, she said business owners must have a skilled labor force.

And that’s where United Bicycle Institute comes in.

On that note, Pritzker toured UBI’s Portland campus on North Williams Ave. UBI offers vocational training in frame building and offers certificates in professional bicycle mechanics. In addition to learning about the key role UBI plays as a national vocational leader with over 20,000 graduates to their credit, Pritzker also hosted a private (no media allowed) roundtable discussion with about 20 local bicycle industry leaders. Pritzker and her staff have toured over a dozen cities in recent months doing similar events and the goal is to hear about the issues facing business owners and develop a strategy for the Commerce Department on how to help them. 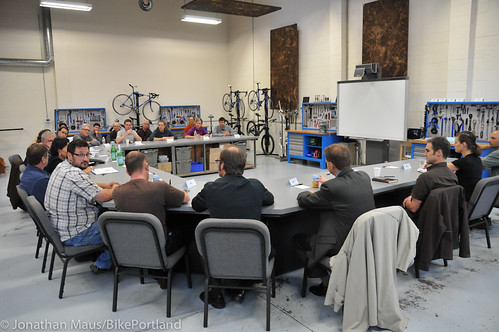 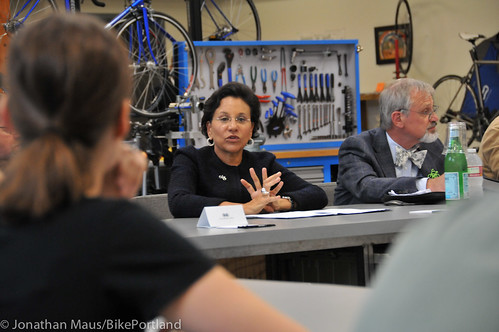 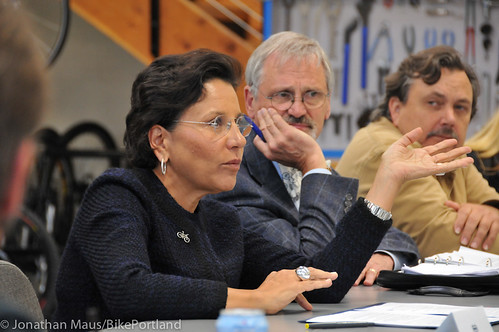 Prior to a brief Q & A session with reporters, UBI owner Ron Sutphin gave Secretary Pritzker and Representative Blumenauer a walking tour of his campus. I listened to the Secretary rattle off one question after another. Where do you get your materials? What barriers do U.S. companies face in getting more of it to market? How many people have graduated? And how many of them are still in the industry? Do your students get financial aid?

“Whether it’s repairing bicycles, building semi-conductors, working in the music industry, or in a factory, we really need to re-align our training in this country to match the needs of the businesses that are growing.”
— Sec. Pritzker

Sutphin said he was hoping the Secretary would ask that last question. “I’d like to accredited in order to allow our students to qualify for financial aid,” he shared with Pritzker and Blumenauer. Given the relatively low-cost of UBI’s classes, combined with the high demand for the skills they teach, Blumenauer seemed to think Sutphin had a good argument. “We’ll talk,” Blumenauer said assuredly, and patted Sutphin on the back as they continued the tour.

Blumenauer is a perfect liaison between Sec. Pritzker and Portland’s bicycle industry, as was evident in his remarks at the short press conference. “Here in Portland, cycling is a real, honest-to-goodness business,” he said to the Secretary. “It makes a huge difference to the local economy. We have over 1,000 people working in the bike industry here and it equates to over $100 million. And it’s growing!”

For her part, Sec. Pritzker’s remarks focused on the importance of training. But she also spoke to the prominence of cycling in Portland and beyond. Here’s how she answered my question about how the societal benefits accrued by cycling could help build its business case:
“We’re all aware how cycling is really expanding dramatically across the country,” she said, “And people aren’t just cycling for exercise, they’re cycling for their commutes, they’re cycling to transport cargo, we’re seeing use of bicycles in emergency situations, our police forces are using cycling to do crowd control and community management.” 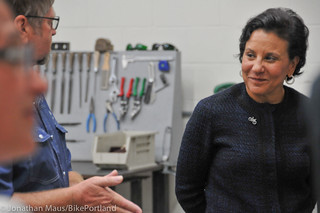 “It’s exciting to see in my hometown of Chicago,” Pritzker continued, “cycling has really exploded.”

Then, getting back to business, she added, “But it’s not possible unless we train folks who can create the bicycles, prepare them, and service the entire infrastructure that’s using bicycles.”

Pritzker spoke about the importance of a skilled workforce and how UBI is at the forefront of that field. “The challenges businesses are facing in needing to find skilled labor comes up with a lot of the CEOs I’ve met with. Whether it’s repairing bicycles, building semi-conductors, working in the music industry, or in a factory, we really need to re-align our training in this country to match the needs of the businesses that are growing.”

For Pritzker, cycling represents not just an industry with a lot of commerce and export upside, it brings other intangible benefits to businesses. Here’s how she responded to my question about how the societal benefits of bicycling could help build its business case:

“The business case is multiple-fold. As well as being outside and having exposure a couple times a day to your surroundings helps with your mental well-being as well as your physical well-being. Those of us who have been employers, and in my career as a business leader, I care very much about the health of people who work for me. Their health and well-being benefits the business.”

And Pritzker isn’t just rattling off bicycle benefits from a list of talking points, she rides regularly herself and competes in triathlons. “I love to get out and ride,” she said, “It’s a great form of exercise.”

(NOTE: Unfortunately, Pritzker’s aides didn’t let us into the roundtable discussion. It’s too bad because it was an impressive assemblage of local bike industry leaders — from Chris King of Chris King Precision Components to Michael Morrow of Nutcase Helmets, and many others. Perhaps those who were in attendance will share some thoughts about it in the comments below.)

Oh man…my invite musta got lost in the mail. ;-(

I did a month of classes there a couple years ago. That was fun, and the technical part of my job at a bike shop was fun. I was too frustrated by always stopping the good stuff and jumping to the phone or counter to deal with public so I am into an aviation maint school now. Like somebody said in Clerks, “This job would be great if it wasn’t for the f****** customers.”

I’m back in school too, focusing on other things. I love the bike industry and hate to leave, but after more than a decade of wrenching on bikes and providing top notch customer service, $12 an hour just isn’t working for me any more.

I heard Secretary Pritzker speak this morning at an event in DC hosted by “The Atlantic” magazine. She was asked for her best memories from her recent 13 city U.S.-wide “Listening Tour”. She ranked her experience with the Portland bike industry as one of the top 2 most memorable moments. (The first was a company that makes oil drilling equipment sensors.)

She expressed her belief that the Portland bike industry possesses an impressive level of knowledge and understanding of supply chain logistics and import/export law with a unique perspective. I thought I would share this here. Good work lads and ladies of P-Town!