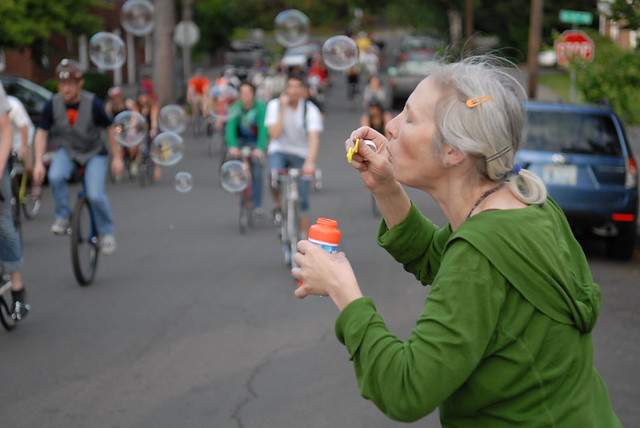 The best bike festival in the world starts at 6 p.m. this evening just south of the Lloyd Center mall, and you’re going to miss most of it.

That’s because, with 257 different bike rides and events in the next 23 days, it’s geospacially impossible to keep up with Pedalpalooza. The only solution is (as any Pedalpalooza veteran will tell you) to trust your gut, take some chances, savor the moments, meet some new friends and have a great time doing whatever you feel like.

There’s a lot to enjoy this year, and we’ll be covering a selection of the rides here on BikePortland as usual. Here’s a quick look at some that caught my eye, starting with the only one I never miss myself: 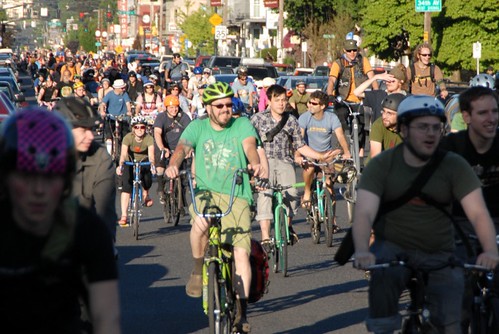 The Kickoff Parade: It all begins at 6 p.m. in Holladay Park with a freeform, wear-whatever celebration of the beginning of summer in Portland. Expect some costumes, some work clothes, lots of chance meetings and approximately half a mile of rolling smiles. Show up early for one of the 200 limited-edition felt Pedalpalooza pennants to attach to your bike. Afterward at 8:30, there’s an afterparty at Branx / The Row (Southeast 2nd Avenue and Oak) with food carts, live music and $1 Rainier beer.

Some other highlights from the next three weeks:

Chutes and Ladders Ride: “We recreate the classic game of Chutes & Ladders life-size on the east-side grid. It’s kind of a race-game, where you’ll need some luck and some speed.”

Fascist Architecture of Portland: Creepily, Portland is home to “an unheralded and unique collection of ‘Mussolini Modern’ buildings.” A local architect is leading a tour of them.

Food Foraging: “We recommend bringing collection bags and scissors and/or a knife.”

Tall Girl Ride: Height minimum: 5’11”. There’s one for tall boys too, but “6’+ encouraged” seems a little wishy-washy if you ask me.

Hot for Teacher ride: “Knock one back and ride off another year of paper grading, lesson planning, and general kid wrangling.”

Willamette Week Troll Ride: The culture section of Portland’s grouchiest weekly newspaper will guide a tour of “the scenes of some of our most controversial stories of the past year.”

The No Hands Olympics: A competition for the well-balanced, with beer, prizes, music and spectators.

Rush Hour Ride: “We’re going to ride the arterial highways of Portland, like Sandy and MLK. We’ll see where freeways have been proposed, where they’ve been built, and go where no bicycles have gone before!”

Bike Odyssey: Each year, the Working Theater Collective puts on a deliciously campy three-nights-only performance of a play performed in various locations around town, to which the characters lead the audience by bike. This year, they visit “a land of gods, monsters, and heroically dexterous bike mechanics.”

Pop one open, Portland. We’re going to have a great month.

I’m glad that your amazing photo record of the past few years allows you to search for “bubbles + unicycle” with out any worry of coming up empty handed!

Dog owners, don’t miss out on Puppypalooza, this Sunday at 11am starting at Normandale Park!