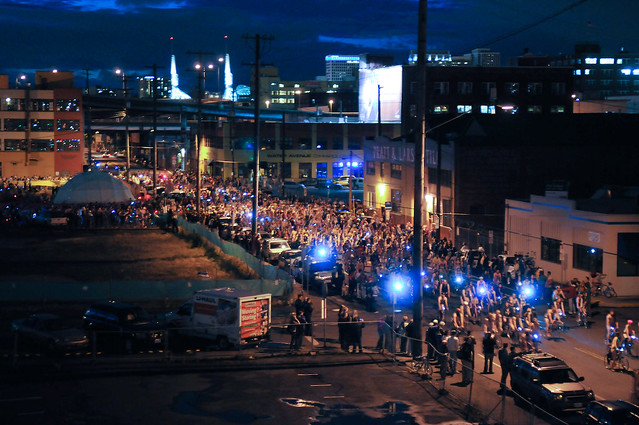 At least five thousand people are expected to hit the streets on bikes Saturday night in Oregon’s biggest pay-what-you-wish bike ride of the year.

And maybe you’ve heard: Most of us will be mostly naked.

Naked biking and Pedalpalooza have gone together since 2002, when a group of visiting Canadians spliced the bare-as-you-dare tradition into Portland’s DNA. It’s since evolved into the World Naked Bike Ride, one of many happening around the world on Saturday.

This year’s WNBR (which is, for the record, 100 percent legal) will begin on the South Park Blocks in downtown Portland. No registration is required. The pre-ride is being hosted by the Portland Art Museum, which is offering ride participants a truly memorable deal: admission to their bike-design exhibit Cyclepedia for only $1 per article of clothing.

“The barer you are, the cheaper it is,” says ride organizer Meghan Sinnott.

As of Thursday morning, the weather forecast for Saturday night is 68 degrees with zero chance of rain.

The art museum opens at 8 p.m., and the ride starts at 10 p.m. In the meantime, museum security will be present to ensure that only ride participants (and not, for example, uninvited gawkers) will be allowed in the museum and its courtyard. 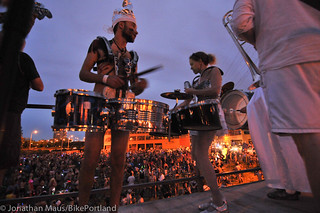 Free body painting and live music will start
the ride, as in past years.

Sinnott said the art museum’s space will give riders “more room than ever before” to prepare for the ride. Some preparation will be necessary – unlike in past years, the ride won’t begin and end at the same location, so riders should bring necessary items on their bikes with them. (Local bike-freight firm B-Line is volunteering its pedal trucks to haul clothing free for up to 1,000 riders – look for them in the Park Blocks until 9:45 p.m.)

The ride’s destination this year is a secret.

WNBR, which is run entirely by volunteers (and is still recruiting for the big night), costs about $4,000 to put on due to city permits, portable toilets, dumpsters and other incidentals, will be accepting donations on site, so if you’re excited to be taking part, bring a few bucks to get a custom-designed 2013 sticker. (On any other day, Cyclopedia admission alone would cost $15.)

WNBR sponsor Joe Bike, a local bike shop and bike-apparel seller, is providing free mechanical assistance before the start of the ride and along the ride course, via cargo bike, as in years past. Their mechanics will also bring a supply of free emergency clothes in case people find they’re less covered than they want to be during the ride.

Afterward, everyone’s invited to one of five official afterparties:

The WNBR describes itself as a “peaceful protest,” and over the years that’s meant different things to different participants. 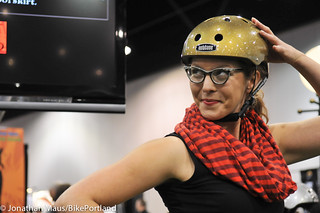 “I think that it means something different for everybody – there’s a space for everybody,” said Sinnott, who’s helped organize most of Portland’s WNBRs. “The way I see it is, every single person is joining the ride for a different reason, and that makes it more powerful. Because each person has to decide why they want to be naked and what it means to them.”

What are you waiting for? It’s time to invite your friends.

Everyone knows the perfect temperature is 69 degrees.

This promises to the be the warmest ride in seven years. Oh yeah!

One question: what’s the situation for bike security when we want to go into the museum? I imagine we can’t bring bikes in and that we’ll need to lock up – Will there be portable corrals like there were years ago when it was still in NW?

Anyone know about the bike parking situation? I don’t exactly want to leave my bike fully unfettered while in the museum.

the Museum has brought in additional bike parking.

Do shoes plus socks equal 2 pieces of clothing, or 4? I better wear sandals instead to be safe…

Save a buck! Wear 2 sandals and 1 sock. (I can’t believe that I’m letting Mrs Dibbly talk me into this!)

Any comments about parking & locks? Not sure where I’m going to keep my keys. Maybe in my sock? 🙂 Seriously, though. What’s the deal on secure bike parking? If we can avoid carrying bike locks, I’d prefer to do that.

The really cool thing about the naked bike ride is it makes it easier for me to persuade others than I’m not some hippy lunatic and I’m just riding my bike because it is cheap, good exercise, and a responsible alternative to sending money to Trimet or our enlightened friends running the show in the Arabian peninsula.

This year there will be several volunteer body painters there as well as some professionals volunteering their time. All donations will be going back to the WNBR funds that go to paying for the costs to put it on! Go towards the courtyard, I believe. If you can’t find the painting, look for the volunteer tables near the Portland Art Museum and they’ll direct you.

Yo dogg, little typo I spot. The exhibition is “Cyclepedia” but you put down “Cyclopedia”