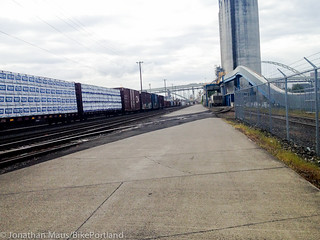 The Cement Road with Fremont Bridge
in the background..
(Photo © J. Maus/BikePortland)

There’s a renewed effort afoot that could result in something most observers thought would never happen: legal public access to the “Cement Road” that runs through Union Pacific’s Albina Yards along the Willamette River between Swan Island and the Fremont Bridge.

Union Pacific Railroad owns the road and they don’t allow public use. There are “Private Property” and “No Trespassing” signs posted at its northern entrance (at the end of N Portland Center Way); but many of Swan Island’s 10,000 employees who ride bikes to work still use the road because it’s the only flat and safe way to get to work. As recently as December 2012, UP spokesman Brock Nelson said they were, “Not interested in either selling or allowing public access to this property.”

However, it now appears UP’s position on this idea might be softening up a bit.

Last week U.S. Congressman Earl Blumenauer facilitated a meeting that included reps from Union Pacific, the Swan Island Transportation Management Association, and the City of Portland. The impetus was a possibility that the Cement Road might be included in a TIGER grant funding request. While we now know that the TIGER application does not include the Cement Road, it’s worthwhile to note that Mayor Hales’ office and other sources say the conversations are ongoing and that Union Pacific seems — for the first time ever — open to the bicycle access possibility.

Mayor Hales’ Policy Director Josh Alpert confirmed for us this morning that, “the mayor has been actively involved in the discussions with Union Pacific regarding the North Portland Greenway.” Alpert says Hales has long been a supporter of the Greenway project (which would create a 10-mile paved corridor from Kelley Point Park to the Eastbank Esplanade) which he referred to as a “vital linkage.”

“The Mayor has long been a supporter of the NP Greenway both as a trail and a transportation corridor… and tying in Swan Island is critical and becoming more so as PCC and others invest and expand in the area.”
— Josh Alpert, Mayor Hales’ Policy Director

Hales’ Communications Director Dana Haynes added that, “Apparently the talks are going very well. UP has been at the table, willing to talk, the whole way.”

This is a major shift in a very important conversation. The Cement Road is crucial to the future of bicycle access on Swan Island. Even though these talks are still preliminary, there are several important takeaways from this news:

The big story here isn’t about the NP Greenway, it’s about Swan Island. Sarah Angell from the Swan Island Transportation Management Association recently shared that Swan Island is set to receive about $200 million in private sector investments in the coming years. These new jobs will present Swan Island with even greater transportation access challenges. Making it easier for people to reach Swan Island by bike will be crucial.

Josh Alpert in the Mayor’s office put it this way in an email to us this morning:

“The Mayor has long been a supporter of the NP Greenway both as a trail and a transportation corridor — connecting North Portland residents to downtown and vice-versa is a vital linkage, and tying in Swan Island is critical and becoming more so as PCC [Portland Community College] and others invest and expand in the area.”

Hales and Union Pacific have a golden opportunity to forge an agreement that aids in the economic resurgence of Swan Island and improves transportation access and safety. If this works out it would be a great story for both parties to tell. Stay tuned.

Note: Union Pacific spokesman Brock Nelson could not be reached for comment.

This is great news, not only for Swan Island, but for all North Portland bike commuters. The Cement Road is the holy grail of the NP Greenway.

Just eminent domain the thing and get it over with.

You can’t eminent domain railroad property: they are exempt.
They are so far above the law that short of wartime marshal law the railroad companies will get away with whatever they want.

They are more than exempt. They are a sovereign nation.

Railroads have eminent domain powers. Think about what that means.

As a contract employee of one of the oldest privately held independent railroads, I helped reorganize and consolidate the archives for the them, after they moved into a new building they constructed. I had many chances to peek into things legal matters from the 1880’s-1950’s that would blow your mind!

…on just one of the SMALLER issue’s, I will give you a clue..ok?

….There is a college in a square state,( just above Texas) with an Native Indian name, (but very few Indians any longer) the football team wears red, white. What are they named after?

I offer this cheery thought for the group of just what railroad companies get away with environmentally:
In my 6 years of cycling past the NW rail yard, between NW Front Ave & NW St Helens Rd I observed great amounts of fallen greases, oils, fuels, absorbents and all manner of chemicals that would be used on a daily basis in any normal company.
The difference I observed is that there is so much build up of waste chemicals under and beside the rails that if BNSF decided to leave it would qualify for Superfund site status with no deliberation. It looks disgusting and smells worse. But no entity can make them stop nor can they be made to clean up the last 150 years of business as usual.

So the question is this: is it better to incur the governmental cost of clean up of a site like this or is it better to just pretend that this toxic sludge isn’t running off in to our drinking water?

Chris I
Reply to  q`Tzal

Do they have a rail yard up at Bull Run?

longgone
Reply to  Chris I

Rail runs both sides of the river in the Gorge. I believe the old OSR line, from Hood River, up into around the mountain (Hood) area is closed.
I would assume it is still owned by U.P.

Great news! It is certainly nice to see something (hopefully) accomplished by discussion and compromise.

If he does it correctly he will be BANKING political capital…not spending it.

I find this a very exciting development. Rails WITH trails is not a new concept, its in active existence throughout the country.. Astoria, Seattle and Portlands Steel Bridge to name a few local examples.( Hales as commissioner saw that through, I believe).
Cement Road is truly the only sensible option to connect to and through Swan Island, and increasing the number of cycle trips will benefit the businesses and its employees.

This is huge, and I’m glad that maybe my great great grandchildren will be able to use the NP Greenway. I’m actually sincerely glad to hear about this, sometimes my fatigue about this project overtakes me.

Here’s the “crazy” thing I’m thinking: Who wants to start the west side, South Waterfront to Sauvie Island trail?

Everybody has their price. If things are going “very well”, that means UP is angling to get a major check from the city/state/feds to fund improvements to their tracks.

My fantasy would be to leverage tax benefits with an agreement for ALL active transportation projects to be given standing with any RR that receives federal transportation dollars.

Yes to PBOT taking this over! Yes to Hales pushing for smart development. YES!

This is huge! The RR wouldn’t even attend the North Portland Greenway public discussions. It was kind of silly to make all these plans without the most important group in the room. There were other alignment decisions other than jsut the cement road that were made due to this non-participation. For example, do you think the wald bluff trail would have had a stairway if the RR had been an active participant. How many miles of bike lanes could have been built for the price of the bridge?

Little late but this is still great.

Props to Blumenauer and Hales for making time to facilitate this conversation. I was rather distraught at the real potential of routing people from the Esplanade up Greeley on a project that has the chance to be a real Portland gem.