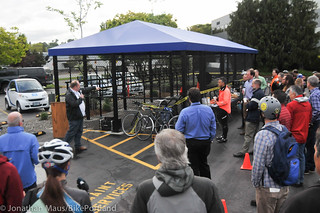 A large crowd gathered to celebrate the opening
of a bike shelter at Daimler Trucks HQ
this morning.
(Photos © J. Maus/BikePortland)

Daimler Trucks North America, a commercial truck manufacturer based on Swan Island, celebrated a decidedly non-motorized achievement this morning: They opened a bike parking shelter near the main entrance of their corporate headquarters.

The new shelter can fit up to 53 bicycles in a space previously used to park just five cars. Daimler project manager Rich Wipf said demand for bike parking from Daimler’s 3,000 Swan Island employees (1,500 at corporate HQ) has increased significantly in recent years. “Some of our employees remember when just one rack was enough. Now we’ve got racks near all the entrances and they’re all filling up.”

Erik Weeman, a mechanical engineer, said there were only “a handful” of riders when he started working at Daimler two years ago. Now the existing bike racks quickly fill up in the morning. “Unless you get here early, your bike would be left out in the rain if you could even find a spot.”

The new shelter, which cost Daimler about $70,000, includes: interior LED lighting; a security camera; 24/7 key-card entry; and a bike repair stand (made by Dero) with an air pump and tools. The racks are split between roll-in and hanging racks. 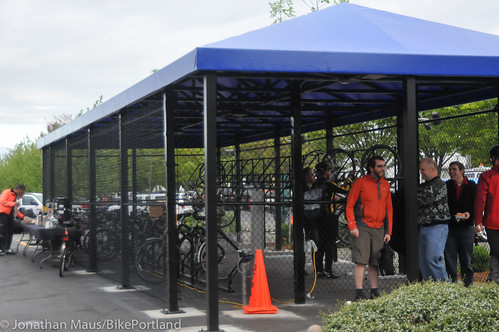 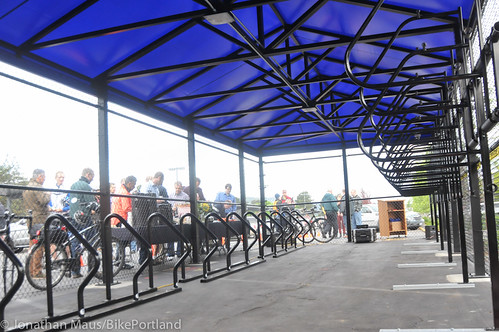 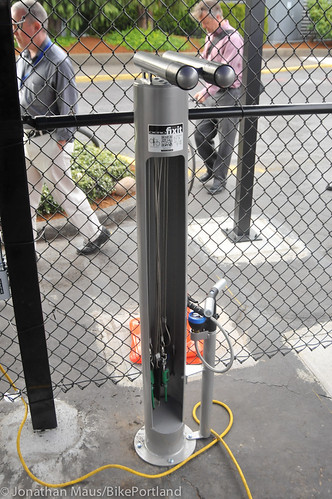 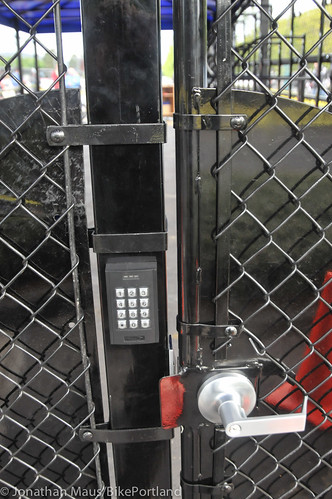 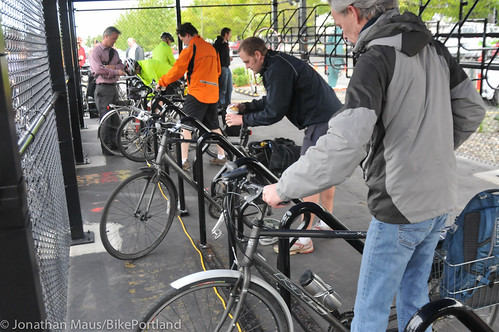 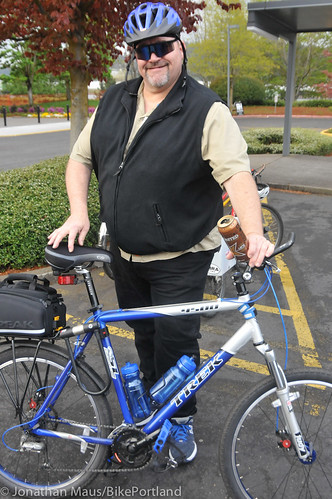 Lots of happy employees came out this morning. 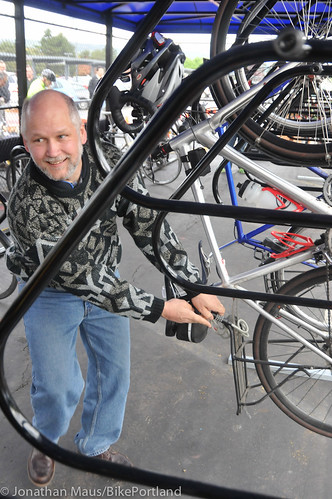 Part of the inspiration for the new shelter came from a similar facility at the northwest Portland headquarters of Con-Way trucking. Daimler’s Dave Panchot, who’s also president of the Swan Island Business Association, said he noticed the Con-Way bike parking facility a few years ago. “I thought it would be a great idea for our corporate headquarters as well.”

For Weeman and other employees, this is just the latest sign that Daimler and other businesses on Swan Island respect — and expect — people to ride bikes to work. Bruno Banceu, who works in Daimler’s wind tunnel testing lab, said having a place to park out of the rain is, “very important.” “I’m always tempted to bring my bike into my office,” Banceu said, “but that’s against company policy.” Juergen Orlich works on Daimler’s powertrain design team. Out of the six people on his team, four have started biking to work. “We’re a truck company,” he said, “but more and more people are riding.” Orlich has no doubt the new parking facility will help encourage even more people to give riding a try. “Absolutely it will help. If there’s one bike hanging in here, other people with see it and think, ‘Hey, I could ride my bike as well.'” 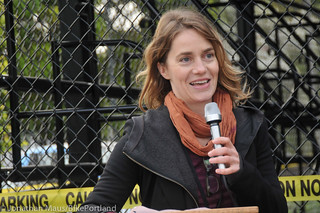 Sarah Angell of the Swan Island TMA
has a lot of reasons to smile.

As employees who arrived to work by car craned their necks to see what all the excitement was about near the bike shelter, Weeman added that, “This is huge. It can open people’s minds up to riding and for all the excuses they might have this crosses many of them off their list.”

Far from just a place to park bikes, this new bike parking shelter is a symbol of the burgeoning bike culture at Daimler Trucks and on Swan Island in general. The person working to connect this rise in bike use on Swan Island to more bike-friendly policies and infrastructure is Sarah Angell, director of the Swan Island Transportation Management Association. Prior to cutting the ribbon this morning, Angell called the facility, “A milestone that charts how far many of you have come… This bike station represents all the miles you’ve traveled. It’s here because they were running out of room, and that’s a good thing.”

The bike parking in my building is full which is abnormal for this early in the season. It’s only going to keep going:

Im glad our company has done this. Now we need them to make mini version of this at the other DTNA locations on the island.

Good for them. My work has something similar and it really makes all the difference sometimes.

My employer (another large manufacturing company in the region) just installed new covered racks this spring. It’s going to make it a lot easier for me to recruit new riders this year. The visibility and convenience of having a new covered facility right by the entrance makes a big difference.

Little ripples that spread positive vibes out about cycling.
It’s like a Bob Ross “fluffy cloud”, I tell you!

My building just had to expand the racks in our dedicated bike room, as they and all the outside racks were always full.

This is so good.
–
What’s funny is that a truck company is now miles ahead of one of Portland’s “greenest” institutions: PSU. Get on the covered parking bandwagon, Viks! (says an employee)

Chris I
Reply to  Charley

PSU has lots of covered and secured bike parking, but you have to pay a small fee…

Charley
Reply to  Chris I

None near my building and none for free. It’s as easy as throwing up a roof over the bike racks between Cramer and Lincoln. Why don’t they do that???

Congratulations to Sarah, the Swan Island TMA, and Daimler. Sarah is doing such amazing work on the island. Her dedication to promoting safe transportation options is inspiring. Good job!!

I love seeing this stuff. I’m lucky enough to work for a company right now that lets me park my bike in an unused cubical across from my office, but I know that won’t always be the case.

Congrats to all involved, including Sarah and her Swan Island TMA.

And when the Ash Grove Cement Road is opened to cyclists and pedestrians ( that is up to the Union Pacific RR)… an ‘at grade’ connection from N River Street ( the other end of the Tillamook St Bridge @ Interstate) to Swan Island.. a second access that will allow safe fast connection will be achieved. Props to the Swan Island Business Assoc for working with the Swan Island Transit Management Assoc. to promote and work towards improved not-motorized access to a very large employment hub for Portland. And lets get the North Portland Willamette Greenway Trail BUILT!

Kudos to Daimler’s Facilities Maintenance group, to the growing “critical mass” of bike commuters at Daimler and especially to our Swan Island TMA Director, Sarah Angell! Great job all!
Combine this with the $5M plus in new bike/ped/transit access projects now open on Swan Island: Waud Bluff Trail, Going to the River Trail and The Captain’s Walk/Ballast segment of Willamette Greenway Trail, and we have lots to celebrate…join us on May 30 for just that!
Lenny Anderson, Ex. Director, Swan Island Business Assoc.

I like some things about the idea. Footprint dimensions must be about 16′ by 40′. Looks like it uses coated fabric material for the roof. A roof of glass to enhance natural light in Oregon’s dark days would be nice, and would allow the use of less electric lighting.

This is a great solution that benefits everyone. As I recall, their car parking lot gets rather full. So, you have to walk quite a distance to get to the factory.

Well done, Daimler and the Swan Island TMA! Lenny and Sarah’s work with the business community on the island has been vital in helping meet the employee need for transportation options. Keep up the good work out there!