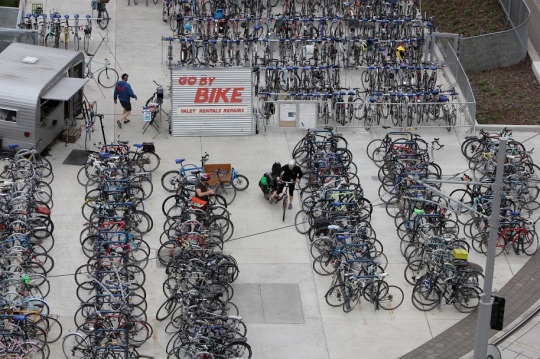 Photo taken last week at the Go By Bike shop under the Aerial Tram. “Only” 175 bikes parked that day.
(Photo: Kiel Johnson)

What started as a mobile bike shop operated out of a small trailer near the Portland Aerial Tram in the summer of 2011 has turned into one of the largest daily bike valet services in the country. One day last week, Go By Bike bike shop owner Kiel Johnson recorded a whopping, one-day record of 198 bike parking customers. I asked Johnson to share more about how his valet service is filling a necessary niche in the South Waterfront and he shared the following stats:

While Johnson gives credit to the bike-friendly road infrastructure in the South Waterfront, he says the key to popularity has been the creation of a welcoming space.

“We have shown that one of the ways to drastically increase the number of people riding bicycles,” Johnson wrote to us via email, “is not only to focus on building comfortable infrastructure but also building a vibrant community place.” Johnson sees himself and his four employees not just as valet attendants and bike mechanics, but as ambassadors for bicycling. Their goal is to make bicycling easy enough for everyone to try. “I hope that we can become that excited guy in the office who encourages his co-workers to ride a bike; except for an entire hospital and university.”

Being highly visible is also a powerful marketing tool. “The bike valet is in such a prominent and open place that it shows people bicycling is something that lots of other people do and they can do as well.”

Located directly under the Aerial Tram, just north of the Oregon Health & Science University (OHSU) Center for Health & Healing, the sea of bicycles and the big red “Go By Bike” sign are impossible to miss for the thousands of people who visit the South Waterfront each day. In fact, one day earlier this month, Congressman Earl Blumenauer stopped by unannounced while giving his colleague (and member of the House Transportation & Infrastructure Committee), Illinois Democrat Cheri Bustos, a tour: 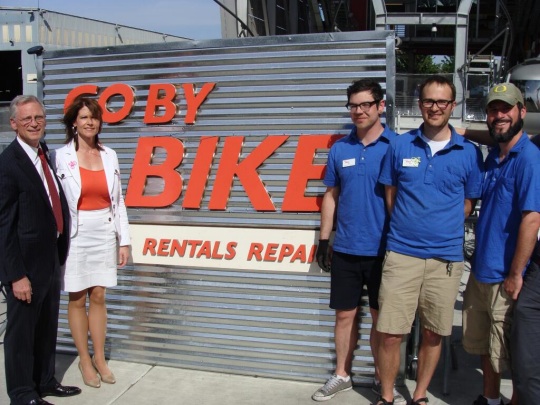 Johnson found inspiration for new ideas on a recent trip to the Netherlands, where he said there’s, “a bike valet at every train station as well as many shopping areas.” As we reported last year, Johnson has come up with some cool (yet very inexpensive) technology to streamline the valet service. They’ve got a custom app where customers can swipe their OHSU badge to sign in and out of the valet (non-badge holders are also welcome).

Go By Bike operates under contract with OHSU. OHSU fully funds the bike valet (which is offered for free) and it’s technically part of Portland Aerial Tram operations. OHSU’s Transportation Options Coordinator John Landolfe says the partnership has paid big dividends, “For significantly less than the cost of a bike cage of similar capacity, we’ve been able to create a secure experience for 200 or more riders as well as a few full time jobs.”

Landolfe loves that the valet can be easily moved and then re-assembled in the event of construction or tram maintenance (something you couldn’t do with a fixed bike parking facility). He also says the Go By Bike valet and parking services is a “great hub of transportation equity” which has customers from all walks of life including students, patients, doctors, office workers and housekeepers.

Landolfe thinks this model should be replicated all over the country. He’s been invited to speak about OHSU’s bike parking operations at the annual International Parking Institute conference in Florida next week.

Johnson’s next big idea is a bike share system for apartments and businesses which he hopes to have available by June. He also hopes to expand the valet service to other locations. “We are much cheaper and I believe do much more good than the half-million dollar bicycle parking facilities being built.”

What a wonderful model & story. Congratulations, Kiel and everyone else.

this is awesome! but don’t forget about the bike repair part! it’s super convenient to roll into work, ask to have new brake pads installed or a flat repaired, drop off your bike, then return after work and have your bike fixed! sure, you can do simple maintenance yourself, but this saves time, and helps keep go by bike going! and they can also do full tune-ups and other repairs.

This is awesome. Congratulations and kudos to Kiel.

I’m particularly intrigued by the 60% female customer demographic. Is that reflective of the commuters to OHSU area (because it’s not for bike commuters at large from what I’ve read)? Or is it a function of making commuters feel safer about when, where and how they retrieve their bikes?

its mostly the demographic of OHSU.

really? Where are you getting that stat. I see plenty of women biking to/from OHSU during my four weekly trips, but I wouldn’t say it’s 60%.

maybe it just means women are more willing to use the valet service than men are. there are still a fair amount of ‘self-service’ bike parking racks in the immediate vicinity of the valet service.

For sure, but Jeff is either stating the bike commuters to/from OHSU are 60% female, or OHSU itself is 60% female. I just want some clarification as I don’t think either of those is true. I will definitely believe the article-stated fact of 60% of bike valet customers being female. I just don’t understand the demographic comment.

Not only the benefits but the lack of parking for employees. I have worked at OHSU for 6 years and put my name on a list to get a monthly parking pass and I’m about a year away from that. Otherwise it is $12 a day to park (which many coworkers do pay that). This has made a disencentive to drive and forces one to get on a bike.

At first I grumbled about not being able to park at work, but now I couldn’t imagine a better way to get to work. I spend 30 minutes in the rain, in the sun, decompressing, and enjoying the city. Being in the daily car commute traffic sucks.

Exactly. Providence Portland is a good example of the other side. They give free Trimet passes, and have plenty of bike parking, but they also provide ample auto parking. As a result, the vast majority of employees drive.

Providence also has a huge campus on flat ground, with the space for parking lots. I’m sorry to be debbie downer, but OHSU’s policy is in place for their lack of space and location, not for their bleeding heart/environmental attempts to adjust employees from car commuting. That being said, I love what they’re doing. I wouldn’t exactly call Providence the “other side” they have good options for those who don’t want to drive to work. They just don’t have the massive need OHSU to conserve space.

(I work at Providence and go to school at OHSU, so know both very well)

That view from the tram down to all those bikes is awesome!

My thoughts exactly.. That picture warms the cockles of my bikey heart.
Good job Kiel, and everyone involved.

Congrats Kiel! I can see my knee in the lower frame of the picture with Earl. Ironically, the bike ride I’d just arrived from probably kept me from looking very photo-presentable. That’s okay. I work best from the shadows–like Darkwing Duck.

Great job to Kiel and crew!

And to the City leaders…its time to holistically upgrade the secure bike parking in this City for all employment and commercial districts. You build it and they park it – if its cars or bikes…

One of the coolest things about what Kiel’s done is making cycle commuting so awesomely visible by creating this sea of bikes at the base of the tram.

People that ride their bikes to OHSU see that they are part of a huge community that gets rockstar parking. But more importantly, non-cyclists get to see that riding a bike to work is not only normal but very popular. It might also help them consider how many of their friends and co-workers may be pedaling alongside them in traffic on the way home.

I love seeing this from the bridge! Does ‘non badge holders are also welcome’ mean it’s not just for OHSU employees? I have no reason to park my bike there, I just want to. Do people tip like they do car valets?

I haven’t used the valet since the moved under the tram, but the first incarnation required no identification, just drop of the bike and get a ticket. I think the current valet operates similarly.

Also tips were not required. Much like the hospital’s valet service, where you actually can’t even give them tips if you wanted to.

The service is free to all. OHSU affiliation is not required. They also provide bike repair and rentals (for a fee).

Most of the bikes in the photo above are outside the valet parking area. Thus, i think they are in addition to the 175 bikes parked by the valet that day.

And many hundreds more bike to OHSU without using the tram or gobybike. The ride up that hill is the high point of my day…figuratively and literally.