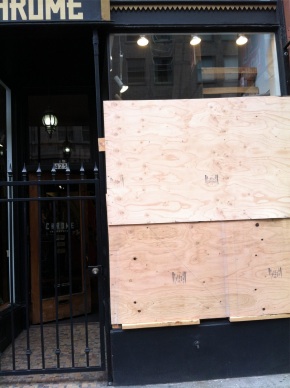 Thieves smashed the large front window of the Chrome Industries store at 425 SW 10th Avenue in Portland in the wee hours of Monday morning.

According to Store Manager Lilly Eidsness, they broke the glass and “grabbed whatever they could reach.” In this case that was five bags — which were hand-sewn custom bags made by in-house seamstress Lara Kessler. The total value of all the bags is $630 and the broken window is estimated to cost $1,000 to replace. Chrome is open for business while the window is being replaced.

The custom bags were one-of-a-kind, which leaves Eidsness hopeful they will catch someone’s eye and end up being recovered (see photo below). Below is a photo of the stolen bags followed by a description of each one: 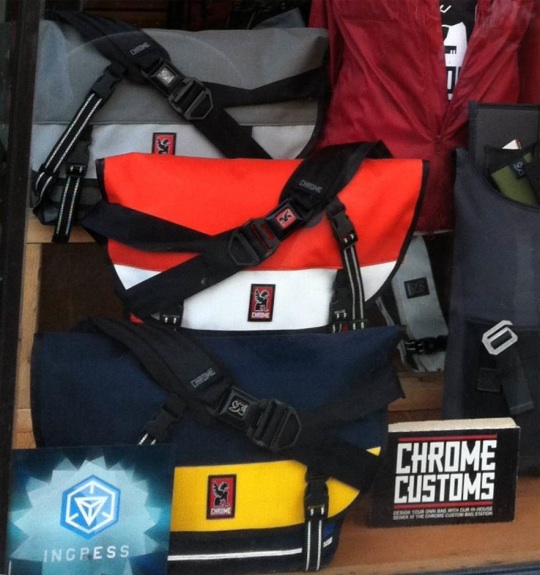 The three bags on the left are the custom stolen items.
(Photo: Chrome Industries)

The all grey bag all the way on the left is custom made and one of a kind.

There may be similar but much older Chrome bags of the Orange/ White, but this one was made custom as a right shoulder which is unique and one of a kind. (The majority of our bags are made to sit on the left shoulder across the body)

There are similar but older/ used Navy/ Yellow bags in the city. However this bag was also made custom in the store and has a reflective stripe along the bottom of the bag that can be seen in the photo. It also has a black logo on the buckle that make this unique and one of a kind.

Eidsness says Portland Police found some evidence of the theft around the corner from the store; but there are no solid leads thus far.

Chrome’s Portland store opened just about one year ago. This is their first break-in; but it’s hardly the first smash-and-grab we’ve reported on in this area. Just around the corner from Chrome, West End Bikes was one of several bike shops in the area hit by the “window pane bandit” back in 2011.

Eidsness says she’s already contacted other stores that sell bags and similar items and encourages anyone with information to contact her at (503) 719-4693.

lame… I hope the perpetrators get caught!

Some time glazier here…at least the new pane will be tempered and much harder to shatter — until the remaining pane is taken out.

^_ Seconded. Such a shitty thing to do. Those are some fairly distinctive Chrome bags, so I’ll keep an eye out for sure.

Most likely they’ll end up on Craigslist and out of the state. I doubt anyone will actually carry these puppies around when they’re so high profile.

I was just thinking what if a bag had a tag on it like you could find if it was stolen.