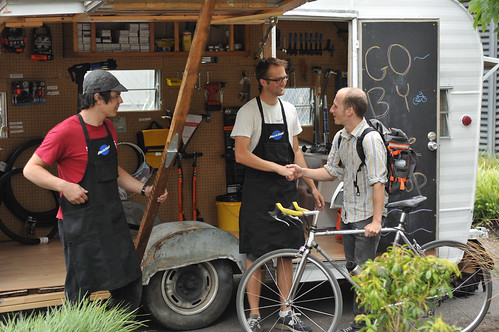 A new bike shop has opened up at the base of the Portland Aerial Tram in the South Waterfront neighborhood. Go By Bike is owned by Kiel Johnson and run out of a refurbished camper. I stopped by on opening day yesterday to learn more. 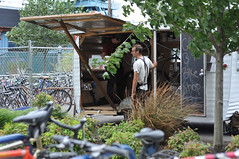 We counted about 325
bikes parked within yards of
the shop yesterday!

Nestled among well over 300 bikes in overflowing racks outside the tram and the OHSU Center for Health & Healing, Johnson’s humble, 7 by 14-foot mobile bike shop awaits the hundreds of people who bike up to Oregon Health & Science University each day. The idea behind the shop is to have people drop off their bikes in the morning and then pick them up on their way home.

OHSU’s transportation options manager John Landolfe was at the opening yesterday. He contacted me back in March to spread the word that he was looking for someone to open up a shop. “People asked for it, and Kiel [Johnson] really stepped up with his proposal,” said Landolfe. 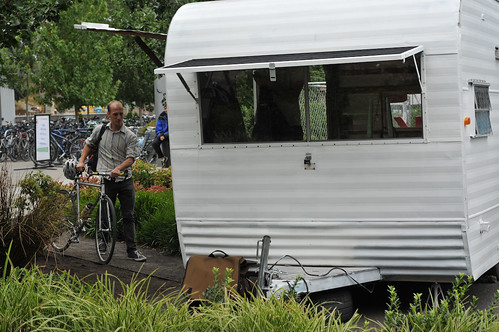 The old camper doesn’t exactly fit in with the modern lines of other buildings in the South Waterfront. 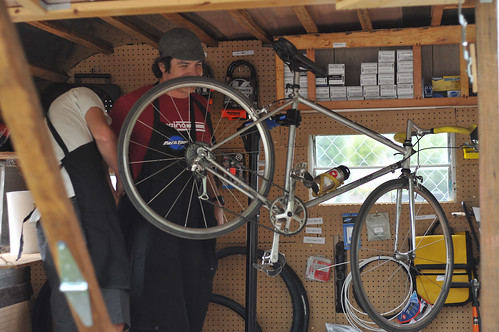 The shop is on a temporary, one-week pilot lease. “Hopefully we can extend it,” says Landolfe. One of the issues with how the camper doesn’t meet existing architectural design guidelines. (I’ve asked for further clarification about why only one week was given for the lease and will update when I hear back.)

Johnson’s name might be familiar. He’s the guy who single-handedly sparked a school bike train revolution in Portland that led him to attention from NBC-TV in Los Angeles and won him an Alice Award from the Bicycle Transportation Alliance earlier this year. 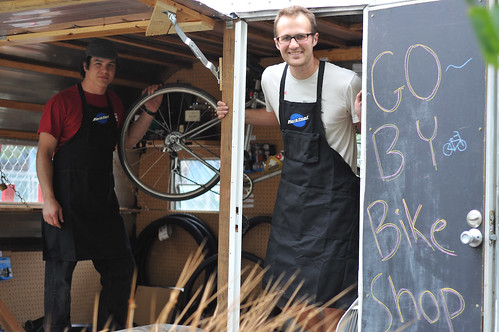 The proud owner is ready for your business.

Johnson did some great work on the trailer, which he bought for $850 off Craigslist. It’s small, but he and mechanic Eric Phelan can fit comfortably inside with a bike in the stand, a workbench, and a small selection of basic accessories in stock. As for the name, Go By Bike, Johnson says he got that idea from a 2007 post on BikePortland where I wondered why Portland doesn’t have a “Go By Bike” sign similar to ones we have for taxi, streetcar, and bus. 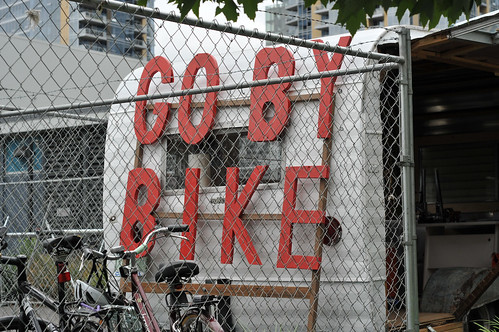 It was too windy to put up the sign.

Go By Bike will be open five days a week from 7:00 am to 6:00 pm. Hopefully OHSU will extend the lease and it will be around for a long time.

Both Landolfe and Johnson are urging people to send feedback about the shop (especially if you want to see it become a bit more permanent) to them via email at bike at ohsu dot edu or gobybikeshop at gmail dot com.

Go Kiel! Good luck and best wishes for your new business endeavor! Wouldn’t it be great if this was the start of a trend? We’ve got food carts – why not bike carts?

Great idea and a good man to provide the service.

“…One of the issues with the higher-ups at OHSU is how the camper doesn’t meet existing architectural design guidelines. …” maus/bikeportland

Johnson’s modified camper trailer has a nice design. It’s the design of those building’s plopped on the south waterfront that are lacking. Let Johnson keep his operation going, build up a little capital, and maybe he could invest in an Airstream or similar streamlined travel trailer.

Their design couldn’t be faulted for not meeting existing architectural guidelines, because Airstream type trailers look rather similar to the aerial tram cars.

“does not meet architectural guidelines” is just a sugar-coated way of saying “we think it’s ugly”.

Brilliant! If OHSU is smart they’ll allow this small business to continue to operate into the future.

Landolfe said he’s also talking with a food cart operator who might open up near Kiel’s shop as well.

Lucky OHSU commuters – they can get their tune- ups from a PDX bike rockstar. Good luck with the business! And don’t let them tell you that your caravan ain’t pretty. It’s what’s on the inside that counts.

This repair shop should thrive. The street car tracks with its wheel eating gaps should provide an endless supply of customers. It is handy to have doctors right near by also.

Jonathan– OHSU is Oregon Health & Science University and hasn’t been “Oregon Health Sciences University” for a few years. It has had this new name seen OGI became a part of it.

It seems like a good space for a shop. Talking to people today, many bicyclists haven’t realized what it is after seeing it. OHSU should send out an email to their bicyclists.

Seems like the names are pretty interchangeable, you can find both of them throughout campus.

MIddle of the Road Guy
Reply to  pat

It still says OHSU on the webpage

The Bike Gallery store on SE Woodstock has a big sign outside that says Go By Bike. I don’t know if they’ve trademarked the term, but the sign has been up for years. They’ve used that phrase frequently on tents, t-shirts, etc. at bike-related events where they are a sponsor. Hopefully they’ll take the high road…

I saw the trailer this afternoon and was immediately struck by what a great idea it is. The only thing I’d suggest is that they consider experimenting with opening earlier if the lease gets extended. A lot of medical workers start their workday at or even before 7am.

Knowing that the owner is “the bike train guy” makes me even more likely to support it.

That is a great idea! Thanks for the feedback, I was thinking of doing one or two days where we open earlier, and some where we stay open later. Hopefully we will be around past next week to try it out!

It’s about time, what a missed business opportunity to NOT have a bike shop down there! I hope they stay open…

The ‘his trailer doesn’t fit with the modern lines’ folks should take a copy of Jane Jacobs’ Death and Life of Great American Cities with them and read it on their lunch break. I think the contrast between the two architectural styles/aesthetics is the best part of the whole endeavor. And it was off Craigslist. I love this town!

Maybe a stretch-limo late model Land Rover would be viewed as a more acceptably conformist exterior for this business? Give me a break.

Good luck! And Duck – Just watch out for that hinged porch pole holding up the front wall. 😉

So awesome!! I love it. I wish I had to ride that way on my commute just so I can take advantage of it!

One other thing that is good about this is that it might help some people decide to commute by bike who otherwise wouldn’t due to fears of “what if I have a flat or my bike breaks down?”

A side benefit is security for the locked bikes, additional eyes in the area will help deter the common criminal (may not help with the uncommon criminal though).

Happy to announce that the OHSU Bike Valet & Go By Bike Shop will now be at South Waterfront all month for the Bike Commute Challenge. Thanks for the patience and support while we test this out and plan out a long term solution. And of course, if you like either service, the best thing you can do is drop by and give em a try (note that we’ll be closed through Monday for the holiday; back in biz Tuesday).

We’ll keep the community up to date on any developments.

John, Did you get the shop name from the bike gallery? they have been using that term for years. I see their stickers all around town that say “go by bike”….