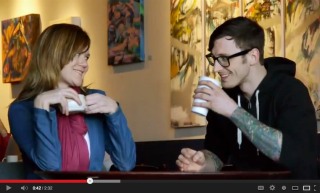 Remember that awesome Craigslist post last summer when a guy got doored while biking downtown, but instead of being angry at the door-operener he sort of… fell in love?

Well it turns out that Craigslist post was the inspiration one of my favorite movies from the Filmed By Bike festival that wrapped up Tuesday night. Portland-based writer/director Mike Vogel of Front Ave Productions created his short film, Doored – Fractured Skull, Broken Hearts, based on that Craigslist post and it made its debut at the festival.

In the film, a man (Jamez Haze) and a woman (Jamie Langton) fall in love at first sight — which happens only after the man regains consciousness from a violent collision with her door. They romance through the city with coffee dates and long walks in the sun. Things are going swimmingly. Check out this funny exchange:

The driver: “You know, in driver’s ed they taught us that all cyclists were pretty much all social deviants hell-bent on destroying American culture from within.”

The biker: “I’ve always thought of driver’s as just lazy, inconsiderate resource hogs with a sense of entitlement about owning the road.”

Driver: “But I ride a bike sometimes.”

Biker: “And sometimes, I drive.”

But then things take a hilarious turn. Watch it for yourself below…

As thefuture said in the original post, that was adoorable! I LOLed at the punchline at the end.