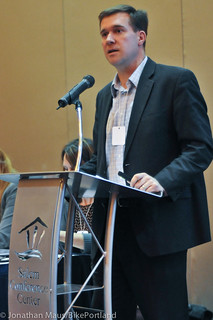 The Oregon Department of Transportation has just released their National Highway System Expansion Working Group Report (PDF). The report is an attempt to clarify the impacts and concerns surrounding a major change to how local streets are managed. As we’ve been reporting on since last fall, the new federal transportation bill, MAP-21, included a provision that added 632 miles of roads in Oregon into the National Highway System. Of those roads, 219 miles of them were previously managed by local agencies.

In the Portland area, several key arterials currently managed and operated by the City of Portland Bureau of Transportation — including Burnside, Broadway, Calle Cesar Chavez (39th) and others — were suddenly thrust into the portfolio of the Federal Highway Administration. This raised eyebrows and major concerns from active transportation advocates because of how this new federal oversight might limit the types of changes PBOT would be able to make on these roads. To put it mildly, PBOT and the FHWA have very different ideas about road design.

A former ODOT staffer shared with me back in November that the change could, “be a major disaster and set context-sensitive design and the needs of pedestrians, bicyclists and transit users way back.”

But on Wednesday at the Oregon Active Transportation Summit, ODOT Federal Affairs Advisor Travis Brouwer downplayed the impact. Asked by a panel attendee about how the NHS expansion will impact design guidelines, Brouwer (whose bike route to work is now part of the NHS expansion) said, “It turns out there’s a lot of flexibility there.” Brouwer said if local agencies like PBOT wanted to implement a design on an NHS road that doesn’t jibe with FHWA standards, they could apply for an exception. He said the application process would be seamless and could often be done at the local level without federal oversight.

The main impacts of expanding the NHS relate to federal design and project oversightrequirements. Projects on NHS routes must follow AASHTO or Oregon Highway Design Manual standards, or must seek a design exception. However, AASHTO standards have a significant amount of flexibility to tailor solutions to each project’s local context. What’s more, flexible approaches developed by ODOT and FHWA through the working group’s efforts will allow local governments to exercise their engineering judgment and approve design exceptions on many projects on the NHS. This will ensure that local governments retain significant control over their own roads and limit to an appropriate level the oversight role played by ODOT and the FHWA.

AASHTO is the American Association of State Highway and Transportation Officials. Their design standards, in terms of bicycle facilities, are considered to be way behind the design standards preferred by PBOT. So much so in fact that PBOT staff were instrumental in the creation of a separate group — the National Association of City Transportation Officials — that was created to offer an option to AASHTO.

AASHTO standards have significant flexibility to design features for non-motorized users, and inclusion in the NHS does not come with any special vehicle mobility standards.
— From the working group report

In their working group report, ODOT also addressed lane width standards, which was one of the main design concerns expressed by local agencies (by the way, the working group included representatives from PBOT, Metro and many other agencies). PBOT is increasingly looking to reduce lane width to 10 feet in order to have more flexibility with other design options (like protected bike lanes); but ODOT often pushes back, saying 12 feet is needed to accomodate large trucks.

Here’s what the working group report says about that issue:

AASHTO standards provide a range of lane widths based upon roadway culture and characteristics such as functional classification, volumes, speeds, and large vehicle traffic. For urban arterials, AASHTO standards allow for 10 foot lanes in constrained areas for arterials that have low truck and bus volumes and are low speed routes.

Another design standard that comes with the NHS expansion are AASHTO guidelines that require roads to be upgraded with guard rails and other “roadside safety features” when projects are taken on. This might mean that when PBOT does a major paving project, it will be more expensive (and therefore they’ll do less paving) because of the safety features that will be required.

And then there’s the major issue of whether or not NHS roads would preclude the creation of and/or make it even more difficult for agencies like PBOT to design bikeways. Here’s how the report deals with that concern:

Some local agencies have also expressed a concern about requirements for shoulders in urban areas given the prevalence of bicycle lanes and on-street parking. While AASHTO guidelines consider shoulders desirable, the standards look at total roadway width, which can be used for shoulders, bicycles, or parking as deemed appropriate.

Similarly, some advocates for non-motorized transportation have expressed concern about whether inclusion in the NHS would preclude designing streets to facilitate active transportation or encourage mobility of vehicles at the expense of bicyclists and pedestrians. However, AASHTO standards have significant flexibility to design features for non-motorized users, and inclusion in the NHS does not come with any special vehicle mobility standards.

While we don’t see any major red flags, and ODOT is downplaying the impacts of the NHS expansion, the bottom line is that there is now yet another layer of bureaucracy between PBOT and the road designs they prefer. Will this be merely an inconvenience toward creating more multi-modal streets? Or will this actually stymie progress? Will design exceptions be as easy as Brouwer says? Or will we see more power struggles between local and federal agencies? Time will tell, but we’ll be watching this closely.

For more background on this issue, check out our past coverage and read ODOT’s NHS Expansion website.

UPDATE: Here’s a response from PBOT Senior Planner Paul Smith (he was on the working group)

“We use the AASHTO Green Book as our design guidance. If we need an exception from the Green Book for any aspect of a design on one of these streets, then a design exception request is written, and it is evaluated and potentially signed off on by three PBOT staff: The City Engineer, the City Traffic Engineer and PDOT’s Development and Permitting Group Manager. At the end of each year, these design exceptions will be audited by ODOT.”

So, it appears that the process to get a design exception won’t be too onerous at all.

What is the policy reason for the change? What do the feds get out of putting more roadways under their control?

Good question Scott. I’m not exactly sure, but I think it’s a matter of the feds simply lowering the threshold on what type of street classifications (“principal arterials” in this case) should be under the NHS umbrella. It’s pretty wonky when you get into it. In general though, the feds say the NHS, “consists of a network of highways that are important to the US strategic defense policy, that provide defense access, continuity, and emergency capabilities for the movement of personnel, materials, and equipment in both peacetime and wartime, and that were not included on the NHS before the date of enactment of the MAP-21.” So there’s that.

Half in jest (but I do think the Feds are playing on fear just a little): “When you build a bikeway, the terrorists win”

Wait… “AASHTO guidelines that require roads to be upgraded with guard rails”? So Burnside, Broadway, and 39th can’t be repaved without adding guard rails without applying for an exemption? That sounds like a disaster and/or an eyesore.

And guess where the guardrails’ posts will go … not off the sidewalk I’m pretty sure. Portland’s narrower sidewalks are about to get narrower if that happens.

Why 39th? FEMA in a big hurry to get from Hollywood to Eastmoreland? Heck. it doesn’t even get to Johnson Creek smoothy.

Though I guess some might consider a path between the two Trader Joes as a matter of National Security.

I can kinda get Burnside since it does go Washington County to Grecham, and of course the Broadway Bridge. But 39th? please

Calle Cesar Chavez? It has a nice ring to it.

Guardrails aren’t used continuously along highways (and those of us who like to tour on rural highways are VERY glad for that!)

They’re usually just placed where there’s a dangerous dropoff. So i don’t think you need to worry about them getting put up along Burnside, Broadway or 39…er, Cesar Chavez.