Oregon’s push to be a leader in electric vehicles took a decidedly bicycle-centric turn this week. On Wednesday, Drive Oregon, a nonprofit public-private partnership funded in part by State Lottery funds, received a $148,158 Regional Travel Options grant from Metro to deploy and monitor electric-assist bikes throughout the region. As the conversation grows around how e-bikes will impact our future transportation picture, I thought it would be interesting to take a closer look at this project.

The “Drive Oregon E-Bike Transit Connection Pilot Project” is a collaboration between Drive Oregon, the Oregon Transportation Research and Education Consortium (OTREC) and Kaiser Permanente (a health care provider with several locations throughout the region). The plan is to use the grant funds to purchase 30 folding electric-assist bikes and then deploy them over a period of 18 months. About 150-180 Kaiser employees will participate in the study and they’ll use the bikes in three months cycles. Participants will fill out weekly surveys and their usage patterns and behaviors will be monitored and evaluated by OTREC researchers. Funds will also go toward the research and analysis of the e-bike usage, a final report of the project and the creation of marketing materials to “encourage effective replication of e-bike programs for other major employers” (according to the project’s grant application).

This is not new territory for Drive Oregon and OTREC. They’re already partners on an ongoing research project focused on the perceptions and potential of e-bikes; but this one is different because it focuses on a different demographic and is targeted at “first and last mile” trips that combine biking and transit (hence the folding bikes).

Specifically, the pilot project will, “seek to attract users that would not otherwise choose to bike or use transit to get to work.” Researchers want to focus on people who have a hurdle to using transit at either the beginning (first mile) or end of their commute to work. Here’s more about the target audience from the grant application:

“By introducing the e-bike as an option, a non-bike oriented audience — that may not consider themselves “cyclists” — can be enticed to access the existing transit network. As discussed in the scope of work, another portion of the target audience is users that might hesitate to use a traditional bicycle because of concerns over physical ability, comfort or sheer distance.” 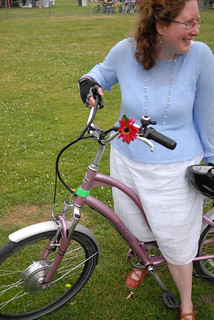 Each bike in the pilot project will have a GPS unit. With that data, researchers can crunch numbers on route choices, total miles ridden, and so on. The bikes will be foldable so they can be more easily stored on public transit and at the office.

Another aspect of this pilot project will be to measure the direct environmental impact of the e-bikes based on vehicle miles traveled (VMT) reductions. According to the grant application, they estimate a reduction in single-occupancy vehicle (SOV) use of over 43,000 miles (18 months x 30 bikes x 4 miles/day usage per user). That equates to a savings of over 2,000 gallons of gasoline, 40,000 pounds of CO2, reduced air pollutants, and so on.

From Kaiser’s perspective, this is all about health. “Investing in prevention will reap long-term benefits: health care cost control, and productivity and health improve,” states a letter they wrote in support of the project. The bikes will be used at three Kaiser locations: Sunnyside Medical Center in Clackamas, Westside Medical Center in Hillsboro, and the Lloyd District in Portland.

This project will very likely move needle of understanding around electric-assist bicycles and it could trigger a boom in a market that already shows signs of life. Stay tuned.

Hopefully they screen out applicants that have poor driving records and those whose hobbies include extreme thrill seeking.
It may reflect very poorly on e-bikes and cycling in general if they gift people with e-bikes that they then go around and terrorize the populace with.

Anything that facilitates “sports riding” will ultimately detract from their goal of showing bikes and e-bikes as a tool not a toy.
And if the e-bikes need to be as ugly a Makita cordless power tool set then so be it; if the visual look says “tool not toy” it might help.

True, but I wouldn’t worry, Kaiser employees tend to be less the “extreme sports type” and more “20 years as a government worker type”. Plus, those are 250w motors, they’re not going to go more than 15mph 😉

This is something who’s time has come. All this talk about the Leaf and Prius when really an affordable option in transportation really is the E-Bike. I can:t wait for more people to get out of their cars and e-bike around town. It truly is the best transportation option when you consider travel time.

Nice article, thanks! Really looking forward to launching the project and will keep you posted on how it goes, and what we learn!

Perhaps electric assist could be quite helpful in the ‘burbs where distance is a huge factor, especially if it could raise average speeds from 8mph for novices to 15-20mph. Although we’d still need to fix the design of the ‘burbs.